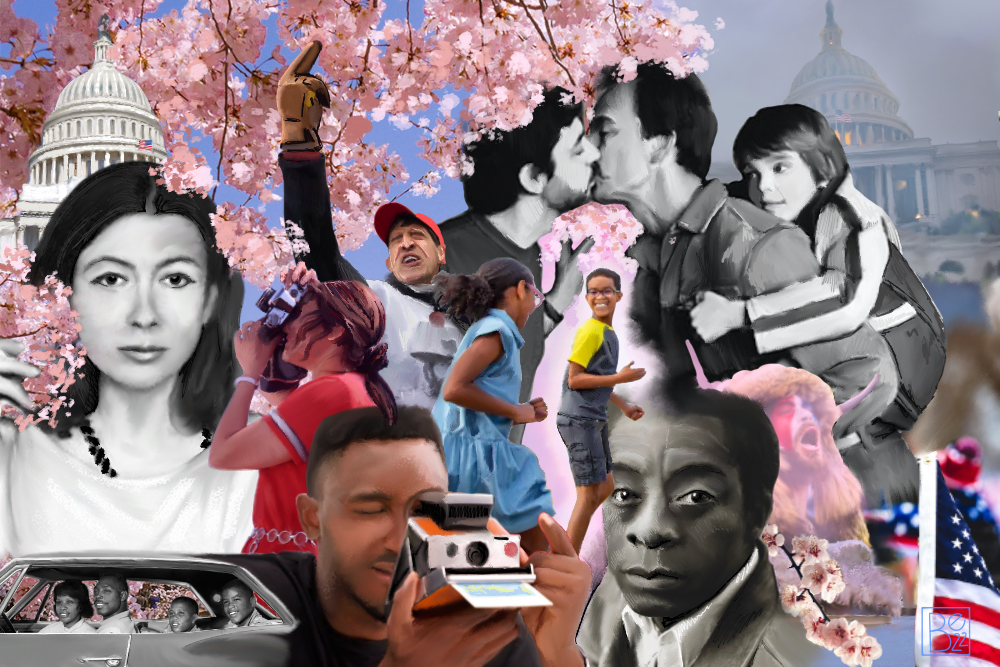 With the collapse of society’s public narrative, writer David L. Ulin looks to literature for consolation. Illustration by Be Boggs.


Leave it to Joan Didion. In her essay “Slouching Towards Bethlehem,” published in 1967, she identified a kind of slippage in our culture, the breakdown of collective narrative. “The center was not holding,” she famously begins, before moving on to details: “casual killings and misplaced children and abandoned homes and vandals who misspelled even the four-letter words they scrawled.” It’s a set of images to which I find myself returning here in the summer of 2022, when the Supreme Court has voted to overturn Roe v. Wade; the findings of a House Select Committee, empaneled to investigate the attack on the Capitol, is regarded by a considerable percentage of the populace as “fake news”; and a series of mass shootings, culminating in the July 4 ambush of an Independence Day parade in Highland Park, Illinois, have turned our communities and schools, once more, into killing floors.

What we’re seeing is not a matter of disagreement or debate. Rather, it’s an expression of the collapse of society’s public narrative: the fragmentation of the commons, if such a term can still be said to apply. How do we come together in a landscape where fiction is now regarded as fact and fact dismissed as mere opinion?

At one time, we relied—or imagined that we did—on public narratives to uphold the center. The point of America, its measure (so to speak), has been to be progressive: to include more people, to extend more rights. I believed this as firmly as anything I ever believed about this tragic country.

I now believe that we are lost.

What Didion foresaw—“we could no longer overlook the vacuum,” she writes, “no longer pretend that the society’s atomization could be reversed”—has become the way we live, manipulated by news that is not news and feeds that amplify ignorance. It’s taken barely 60 years to move from “We shall overcome” to “You will not replace us.” This is how our narrative has unraveled. This is how we have lost our way.

I’m pointing the finger here, yes, I am, at the anti-vaxxers, at the homophobes and anti-trans haters, the election deniers, the traitors who stormed the Capitol. Very fine people on both sides; all lives matter—I, for one, can’t imagine finding common ground with replacement theory supremacists, or, for that matter, advocates of the Big Lie, that the 2020 election was stolen, spread by the former president and his followers. But I’m also wondering about the future of the country, whether there even is one, whether this is a goal we continue to share?

The point of America, its measure (so to speak), has been to be progressive: to include more people, to extend more rights. I believed this as firmly as anything I ever believed about this tragic country. I now believe that we are lost.

There’s a meme I keep encountering, citing Hitler’s propaganda chief Joseph Goebbels: “If you tell a lie big enough and keep repeating it, people will eventually come to believe it.” Perhaps unsurprisingly, this does not appear to be anything Goebbels ever said. Still, let’s stay with it for a moment because it’s also instructive. Certainly, Goebbels could have made such a statement; it aligns with pretty much all he thought. This meme, I should say, is intended as a corrective, a critique of those who have been taken in. At the same time, it also highlights a larger danger: the fact that all of us, given the right circumstances, can be duped.

The same was true in Didion’s era also, when many of the prevailing public narratives were authoritarian and divisive. I think of the quotas faced by Jewish students, among others, at American universities, which extended into the 1960s; the redlining and housing covenants that prevailed across the country; the restriction or outright non-existence of women’s and LGBTQIA+ rights.

Yet in the era of social media—which now comes framed as discourse in its own right—the progress of the last decades feels illusory, if not outright moot. “Given that Twitter serves as the de facto public town square, failing to adhere to free speech principles fundamentally undermines democracy,” Elon Musk tweeted on March 26, shortly before making a $41.4 billion offer to buy the company. (He’s now headed to court to get out of the deal.) Musk is overstating, of course; less than a quarter of U.S. adults use the platform—or about the number who voted for Donald Trump in 2016.

On my feeds, I can see the algorithm working: Trends are tailored to my searches and my predilections, intended to magnify, and encourage, my opinions and beliefs. The public narrative, in other words, has now become a private narrative, self-selected. Nothing is considered or thought through. Rather, it’s a self-fulfilling set of echoes, less conversation than monologue in overlapping snippets of text or images, sound and fury signifying nothing.

In the face of this, I find myself turning away from public narrative. I look for solidarity or consolation in the private narratives of others—literature mostly. Why? Because in books and essays, I find a more fundamental humanity (which is not the same thing as a sense of peace). So many writers have lived through what we’re facing, and worse. Some survived and some did not. But in staring down their circumstances directly, with grace and clarity, they offer a model of how I want to think and to behave.

And so, I look to George Orwell, who admonishes in his essay “Inside the Whale” that for people raised like us, in a country built on rule of law, “such things as purges, secret police, summary executions, imprisonment without trial, etc., etc., are too remote to be terrifying. They can swallow totalitarianism because they have no experience of anything except liberalism.” It’s a reminder of the dangers we are facing, a reminder that we need to stay aware. Or I consider Anne Frank, writing from the Achterhuis: “I see the world gradually being turned into a wilderness, I hear the ever approaching thunder, which will destroy us too, I can feel the sufferings of millions and yet, if I look up into the heavens, I think it will all come right, that this cruelty too will end, and that peace and tranquility will return again.”

When my children were little, I liked to imagine—as the artist Wallace Berman did before me—that one might make revolution a single household at a time. Although I still believe that change begins at home, this, too, cuts both ways. The ecstatic social revolution Didion was critiquing, what did it teach us? That utopia and dystopia are intertwined.

Many days now, I don’t know what to do with this. Many days, it makes me want to retreat. Retreat, however, is just another word for surrender, and surrender comes at far too high a cost. “[W]hat was the point,” James Baldwin asks in The Fire Next Time, “the purpose, of my salvation if it did not permit me to behave with love toward others, no matter how they behaved to me? What others did was their responsibility, for which they would answer when the judgment trumpet answered. But what I did was my responsibility, and I would have to answer, too.”

I don’t believe in the judgment trumpet. It’s not an emblem of my faith. But what I do believe in is the question Baldwin raises: How to live responsibly, not only for one’s own future but also that of everybody else. I am not an altruist, and I am filled with anger, but what else can I do?

We do not get to choose the times we live in, only how we respond.