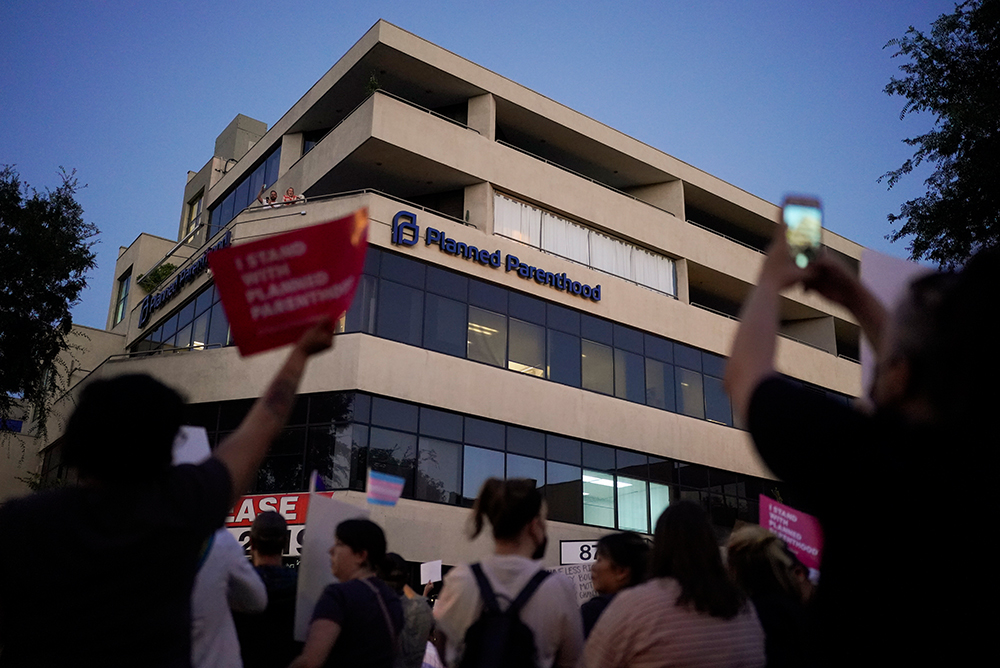 California's Prop 1 is supposed to guarantee reproductive rights. It might instead risk them, columnist Joe Mathews writes. Courtesy of AP Images.

California’s leaders shouldn’t put fundamental rights up for a vote. But the legislature and governor have nonetheless chosen to add Proposition 1 to this November’s ballot.

At first glance, Prop 1 doesn’t look like anything to worry about—if you, like most Californians (including your columnist), support abortion rights. It comes at a time when even conservative Kansas is voting pro-choice. And its 78-word text is seemingly simple. Prop 1 adds explicit protections for reproductive rights to the California Constitution—guaranteeing the “fundamental right to choose to have an abortion” and the “fundamental right to choose or refuse contraceptives.”

Legislators behind the measure have said that California needs such explicit protections to keep judges from cancelling abortion rights here—the way the U.S. Supreme Court did for the nation through the Dobbs v. Jackson Women’s Health Organization decision, which overturned Roe v. Wade.

All that may sound like common sense. But in matters of California governance and ballot measures, common sense often doesn’t apply. Prop 1 unintentionally puts at risk the rights it’s designed to protect.

The right to choose an abortion is well-established in California law. The very same section of the state constitution that Prop 1 wants to amend—Article 1, Section 1—already protects the right to choose, because it specifically lists privacy among our inalienable rights. If the U.S. Constitution contained such an indisputable privacy right, the federal right to abortion likely would still be with us.

More than 40 years of court precedents have reaffirmed abortion rights in our state. And to remove all doubt, a 20-year-old state law straightforwardly guarantees abortion and other reproductive rights.

Asking voters to put these settled and established rights in the constitution is to pose a question that’s already been answered. Prop 1 comes with no new benefits—Californians have no rights to gain from the measure—but with significant risks, both legal and political.

Legally, a new constitutional amendment could become a tempting target for abortion opponents to challenge in court. The federal judiciary, now dominated by anti-choice conservatives who love to read history in strange ways, might seize on such challenges to invent ways to undermine the right to choose in California. After all, abortion is no longer a constitutional right at the federal level.

But the biggest problem with Prop 1 has nothing to do with its outcome, or any other hypothetical. It’s the fact that California allows such measures to go on the ballot in the first place.

Prop 1 also is vulnerable because of what it leaves out. Back in June, when it was clear that the Supreme Court would strike down Roe, two legal scholars, Allison Macbeth of the California Constitution Center at Berkeley Law and Elizabeth Bernal, an editor of the Hastings Law Journal, publicly urged the legislature to incorporate the limits that Roe and related cases put on abortion.

Roe strikes a balance between the rights of the woman and the rights of the fetus, and so  Macbeth and Bernal urged lawmakers to include similar language in the measure. They suggested specifying that, per prior precedent, no law could “deny or interfere with a woman’s right to choose or obtain an abortion prior to viability of the fetus.”

Failure to mention earlier existing law, added Macbeth and Bernal, would “untether” Prop 1 from any solid foundation in privacy protection. Doing so could put both reproductive rights and other rights grounded in privacy, such as marriage, in danger of being reinterpreted by the courts.

“There is a substantial risk that the new California constitutional provision will either be interpreted by courts to have no effect, or that its underpinnings will be erased,” Macbeth and Bernal wrote.

These omissions create political risk as well. Prop 1’s unqualified language gives opponents the opportunity to argue that the measure would establish a right to abortion on demand, at any stage of pregnancy. And that is not a popular policy—most voters don’t support abortion in the second trimester or later. By contrast, polling finds that more than 70 percent of Californians support Roe v. Wade—with its limits based on fetal viability.

But lawmakers dismissed calls to add limits to Prop 1. And they are confident that the measure will win.  I hope they are right.

California’s confounding system of direct democracy has a long history of producing unexpected results. I fear, should Prop 1’s opponents succeed in framing it as an overreaching demand for unlimited abortion, that the measure could suffer an unexpected defeat. That would be a political disaster for abortion rights in America. And in California, it would raise the question of whether our state constitution’s privacy protections still covered abortion rights.

Even a narrow victory for Prop 1 also could be damaging for abortion rights. Anti-choice activists and funders around the country, sensing weakness, would pursue future ballot initiatives and actions to keep California’s pro-choice politicians and political funders on defense. That would be a strategic defeat for reproductive rights nationally. Pro-choice leaders need to spend their time and money fighting abortion bans in other states.

But the biggest problem with Prop 1 has nothing to do with its outcome, or any other hypothetical. It’s the fact that California allows such measures to go on the ballot in the first place.

California’s powerful system of direct democracy permits votes on any subject—which makes the Golden State an outlier. Other countries with direct democracy prohibit votes on human rights. They understand that some freedoms are so fundamental that we shouldn’t let the people vote to take them away.