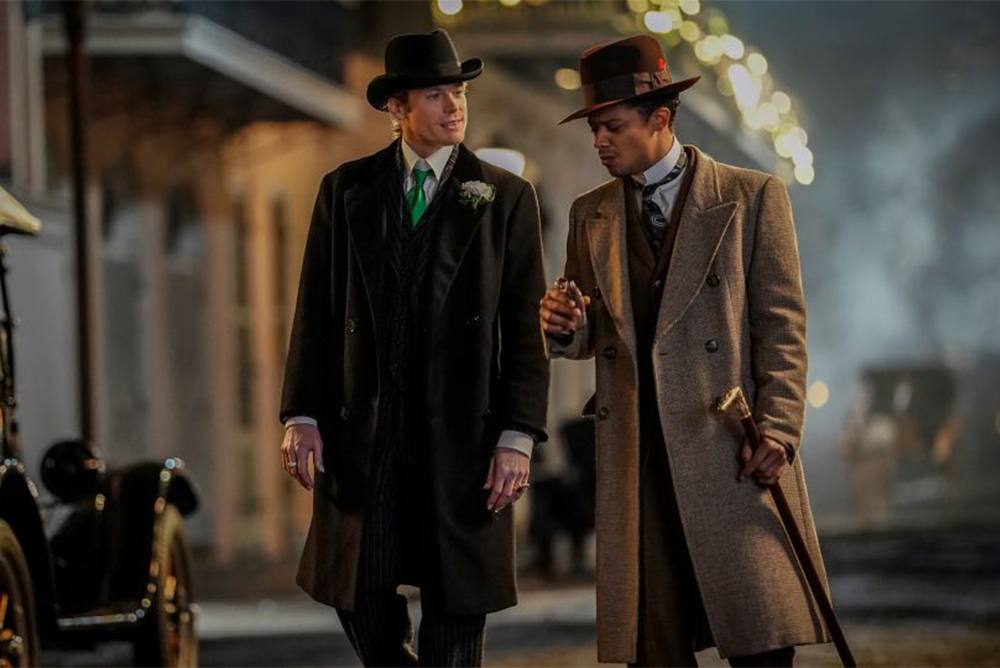 From John William Polidori’s 1819 “The Vampyre” to the recent AMC take on Anne Rice’s classic, the undead have always reflected our changing views on race, sexuality, and more. Courtesy of Alfonso Bresciani/AMC.

For all the puffy shirts, brooding glances, and implicit queerness of Interview with the Vampire, the blockbuster 1976 novel by the late Anne Rice that became the 1994 cult classic starring Tom Cruise and Brad Pitt, it took until 2022 for the gay romance between the vampire Lestat de Lioncourt, and the human Louis de Pointe du Lac to be made explicit.

In the first episode of AMC’s superb television adaptation, the white, aristocratic Lestat propositions Louis, in this iteration a Black Creole business owner, to “be my companion … be all the beautiful things that you are and be them without apology for all eternity.”

This Black queer reimagining—still set in New Orleans, but in the Jim Crow rather than the antebellum era—isn’t some anomaly in vampire fiction, but rather follows the larger cultural transformation that the bloodsuckers have undergone over the last two centuries.

After all, vampires never really die (Rice, for one, wrote 13 Lestat novels), but each generation continues to reincarnate them based on the fixations of the present.

British writer and physician John William Polidori is often credited with kicking off the gothic subgenre in 1819 when he published the short story “The Vampyre; A Tale.” But it’s less remembered that the same year Polidori’s narrative debuted (famously modeling the titular vampire after his demanding hypochondriac patient, Lord Byron), an American author knocked off the concept, immediately linking vampirism with race.

Set just before the Haitian Revolution, the novella, “The Black Vampyre; A Legend of St. Domingo,” begins after a slave owner attempts to kill a boy who cannot be killed. At first, the vampire seeks revenge, but after marrying and turning the slave owner’s wife, the two not only form a family unit but eventually take a cure that enables them to return to their human forms and to Christianity. But their happiness can only go far in a world defined by skin color; the ending reveals that their mixed-race descendant, now a resident of Essex County, New Jersey, finds himself also experiencing “the thirst of a vampire.” As Katie Bray argues in her dissertation “Haunted Hemisphere,” the plot takes a wide view of race in America, questioning “not only putatively pure racial lines but also uncomplicated U.S. national narratives.”

To the Victorians, the bloodsucker was still, above all, a gothic monster. It would take another half century before the vampire could begin to be re-imagined as a romantic lead.

Homosexuality, too, was present in early gothic vampire literature. J. Sheridan Le Fanu’s Carmilla, serialized from 1871-2, became the prototype for the lesbian vampire novel, told through the perspective of a young girl named Laura who catches the attention of a mysterious stranger who comes to stay with her family following a graphic carriage incident. LGBTQ scholar Ardel Haefele-Thomas’ analysis of Carmilla and 1897’s The Blood of the Vampire, Florence Marryat’s story about a mixed-race psychic vampire named Harriet, suggests that both plots vacillate between “demonizing and showing empathy” toward their undead characters. This ambiguity—epitomized by Laura’s torn recollection of her vampire companion Carmilla, remembering her as “sometimes the playful, languid, beautiful girl; sometimes the writhing fiend”—underscores how these stories were not intended to be read as clear-cut morality tales. But if Carmilla and Harriet aren’t wholly demonized, their vampirism still makes them, ultimately, a stand-in for society’s fears, rather than fully realized characters with whom the reader can sympathize and identify with.

As it so happened, the same year readers discovered The Blood of the Vampire, Bram Stoker’s immortalized the vampire trope as we know it today with Dracula. To the Victorians, the bloodsucker was still, above all, a gothic monster.

It would take another half century before the vampire could begin to be re-imagined as a romantic lead, and daytime television is partly to thank for our change in appetites.

Dark Shadows, the ABC daytime soap opera that ran from 1966 to 1971, acquired a cult following thanks in part to Jonathan Frid’s magnetic portrayal of the immortal Barnabas Collins, a vampire disgusted by his own habits. Then, five years after it off the air, came Interview with the Vampire, the debut novel of a 34-year-old graduate student in New Orleans. The novels in Anne Rice’s gothic horror series The Vampire Chronicles weren’t romances, but they humanized vampires, depicting them as three-dimensional characters.

Notably, Rice, who died in 2021, was a vocal champion of gay rights, and by treating her characters with care and giving them a clear homoerotic undertext, she invented a modern vampire. And as Joseph Crawford, a scholar who’s extensively researched the origins and evolution of the paranormal romance genre, argues, shifting public mores primed readers to be ready to accept this reimagining.

“The figure of the vampire has historically been used as a representation of marginalized and vilified social groups,” he writes in his definitive book The Twilight of the Gothic? and led by Rice, the “revisionist vampire fiction of the 1970s was, to some extent, a symptom of changing social attitudes towards such groups.”

Steamy vampire stories that were more sympathetic toward the undead skyrocketed in popularity, first in the U.S. and then abroad. Nearly a century after Stoker’s Dracula, even the Count was ready to be given a love interest by the 1990s with Francis Ford Coppola’s reimagining (a genre-shifting, queer-coded blockbuster that Coppola made at the same time he was working on a project on the AIDS epidemic).

Vampire romances have continued to be in hot demand in the 21st century with the rise of properties like The Twilight Saga, The Vampire Diaries and True Blood. Over this period, the vampire may have picked up some new attributes (like being sparkly or “vegetarian”), but its basic DNA hasn’t changed; what’s changed is our perspective of the vampire’s condition. More and more, the public is considering what it means to date the other instead of demonize it.

Maybe there’s something especially hopeful, then, in the way AMC’s Interview with the Vampire continues to build on this context, bridging race, sexuality, and romance, with all their inherent nuance and complications.

Watching the show is a reminder that though the undead may be timeless, us mortals caught in their thrall are constantly changing. In this way, we, too, crave new blood.