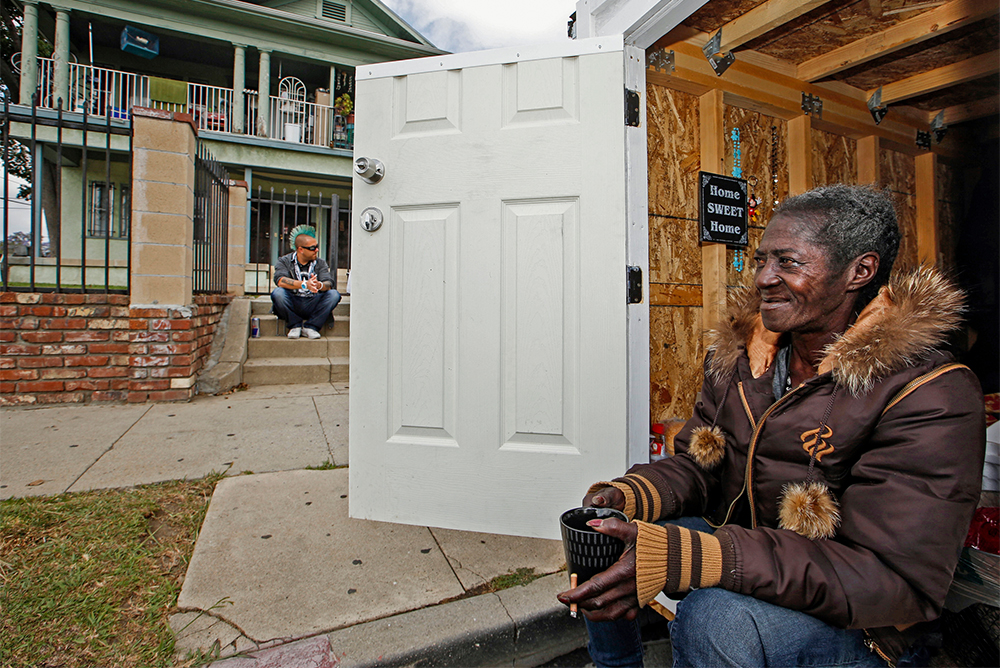 Talking to Los Angeles' homeless population, one thing becomes immediately clear: what they want most is immediate—even if temporary—housing solutions. "If you build it correctly, they will come," writes Rob Eshman, CEO of A-Mark Foundation. Courtesy of AP Newsroom.

Government officials, activists, academics, homeowners, and two very competitive mayoral candidates constantly explain what the over 69,144 unhoused people living in Los Angeles County need and want. But you know whom we rarely hear from?

Google all you want: You’ll find a lot of surveys about what housed people in L.A. think about unhoused people. You’ll find endless columns on what experts opine. But until recently, you’d be hard-pressed to find studies asking the people actually experiencing homelessness what they think should be done about the crisis.

With a rise in homeless encampments, due in part to the COVID-19 pandemic, policy makers have implemented at-times scattershot efforts to combat the problem, with costs projected in the hundreds of millions of dollars. But such plans, said one researcher, were “formulated with no clear evidence on the housing needs and preferences of unsheltered people, information that’s critical to understanding the feasibility of these policies.”

The two new studies seek to bridge the gap between the well-intentioned plans and what unhoused people themselves say they actually need.

That seems like a no-brainer, but in fact is big news that should combat pervasive myths that suggest homeless people prefer to live in encampments, that it’s preferable to wait for more permanent housing, or that even if taxpayers funded shelters, homeless people wouldn’t agree to go there.

A recently released RAND Corporation survey, conducted from September 2021 to January 2022, interviewed 216 homeless men and women living in Venice, Hollywood, downtown, and at the Veterans Affairs complex near Brentwood. It reported that 90% expressed interest in finding housing, but that bureaucratic delays (41% of the unhoused never received follow-ups to housing applications) and inappropriate shelter offerings present serious obstacles.

The RAND finding that the overwhelming percentage of homeless people want to be sheltered tracks with another just-released study, conducted in February 2022, by the Santa Monica-based A-Mark Foundation, which I joined as CEO in June.

A-Mark teamed up with UCLA’s Luskin School of Public Affairs to send graduate student researchers to L.A.’s Skid Row, where they asked 100 unhoused men and women living there what they would do about homelessness if they were mayor of Los Angeles.

The voices of our unhoused neighbors are clear: If a magic wand could be waved over the City of Angels, giving them mayoral power, the first thing they would do is provide shelter.

Researchers asked unhoused people to list their top five priorities from a menu of options, which included healthcare, necessities, resources, sanitation/safety, and housing. Overwhelmingly, 92% of respondents chose securing temporary or permanent shelter as their first priority if they were, hypothetically, mayor of L.A., and as their answer to the follow-up question: “What kinds of things would you do in the short run?”

The fact that housing rated so highly in both the RAND and A-Mark studies punctures the myth that homeless people prefer homelessness. This directive should prod policy makers and activists toward immediate, if temporary, housing solutions. Because these studies make it clear: If you build it correctly, they will come.

I want to emphasize my use of the word “correctly” here, because that is where a lot of the misconceptions around the need to prioritize housing for people who are homeless takes root.

The RAND and A-Mark surveys offered helpful data to help policymakers understand what kinds of temporary shelter work, and how best to organize the bureaucracy around them.

In two focus groups that were part of the A-Mark Foundation survey, women said they avoided shelters that broke up families. Just 14% of the shelter units in Los Angeles serve families, according to a 2018 LAHSA count.

“The kids got to go with the mom,” one woman said, “and the dads got to go somewhere else, and then they can’t be together.”

Lack of security at shelters and concern over sexual violence were also named as top concerns. Men said curfews that made shelters feel like prison and prohibitions against dogs kept them away.

“If shelters or transitional housing require sharing rooms, have curfews and other rules, or reduce people’s sense of self-determination,” the RAND researchers echoed, “our research suggests these won’t be an effective approach to reducing street homelessness.”

On the bureaucratic side, the RAND study cited inherent problems with a multi-step system that requires caseworkers to enroll homeless people for housing, then go find them when housing becomes available. Encampment sweeps and the very nature of homelessness make that a challenge, and caseworker burnout itself is high. The result? The RAND survey reported that 75% of respondents had been continuously homeless for over a year, and 50% had been homeless for three years.

The RAND study also found that the majority of homeless people resided in Los Angeles County before ending up at their current location, and 75% reported residing in California—two data points that contradict the common notion that L.A.’s unhoused all come from somewhere else.

As the RAND and A-Mark studies revealed, despite concerns and circumstances that kept people away from shelters, they still wanted housing. “Walking around with pepper spray,” one unhoused man told the A-Mark team, “that’s my life.”

Said another unhoused man about what his approach would be if he were mayor: “Some people have given up hope, we have to give them hope.”

The RAND researchers acknowledged that Angelenos are tired of encampments and eager for solutions, but observed that “it will do no good to respond to this political imperative with policies that are ineffective.”

The voices of L.A.’s unhoused speak through this new research, and suggest productive paths forward. They point to the need for more shelters, especially those that take families, like Upward Bound in Santa Monica, and more private “tiny home” shelters with pet areas, like the Arroyo Seco Tiny Home Village in Highland Park.

We need to collect more research from people undergoing homelessness to learn what kinds of temporary shelter they would be most likely to successfully move into, and then transition out of into more permanent homes.

But we needn’t wait for more research to absorb the central lesson of these studies. The voices of our unhoused neighbors are clear: If a magic wand could be waved over the City of Angels, giving them mayoral power, the first thing they would do is provide shelter.

It’s a message our next actual mayor needs to hear.