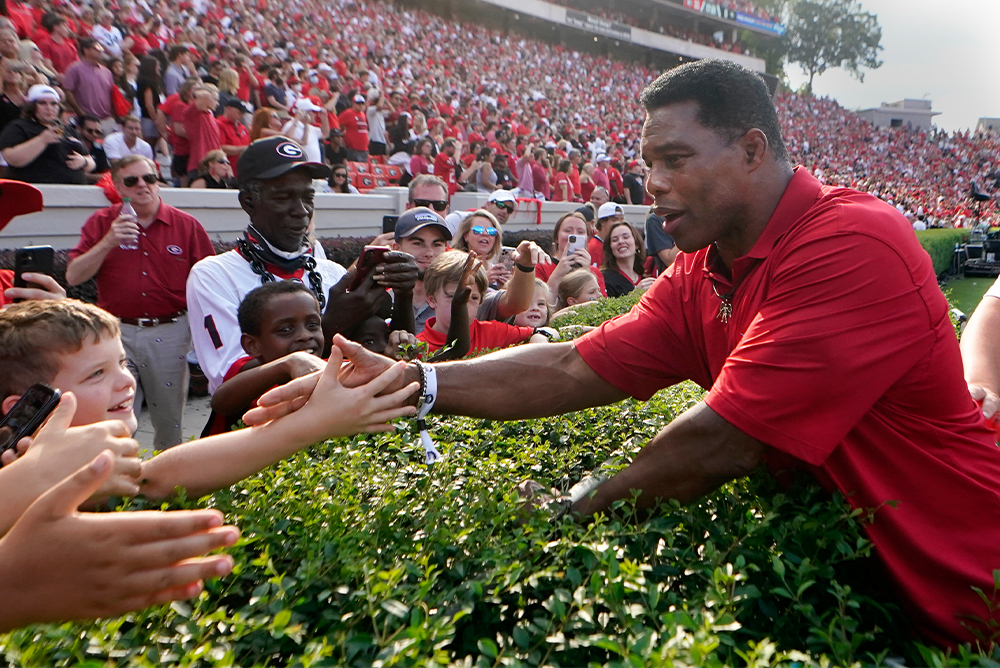 Herschel Walker is facing the sort of damaging disclosures that can torpedo a political campaign—still, Georgia Republicans support him for Senate. His athletic stardom has nothing to do with it, historian James C. Cobb explains. Courtesy of AP Newsroom.


Why are so many Georgians still supporting Herschel Walker’s bid to replace Democrat Raphael Warnock in the U.S. Senate?

The easy answer seems to be the vast reservoir of good will that derives from Walker’s legendary exploits on the gridiron at the University of Georgia (UGA) in the early 1980s.

But the lingering afterglow from what he accomplished 40 years ago is not what’s keeping Walker competitive in the face of multiple disclosures of the sort that have torpedoed many a political campaign. Instead, conditions on the ground in Georgia and survey data suggest the key to understanding Herschel Walker’s staying power lies in the shifting demographic and political landscape that has left Georgia Republicans fiercely determined to defend the increasingly shaky ground they occupy.

Walker hasn’t made it easy for his supporters. His off-the-wall takes on air pollution in the U.S. (China foisting its bad air on us) and on evolution (the mere survival of the ape proves that Charles Darwin had it wrong) should amount to major alarm bells in and of themselves. Then come the outright fabrications he has offered concerning his achievements in education and business, his civic and charitable contributions, and, most notably, his personal life. Beyond that, it now appears that despite his stern public stance against abortions, in 2009 he persuaded a woman he impregnated to have an abortion and footed the bill for it. Walker’s son Christian blasted his father’s efforts to dismiss this allegation, accusing him of serial adultery and numerous threats to harm him and his mother, who had already described Walker holding a gun to her temple. For his part, Walker links his violent impulses to a multiple “identity disorder” that he has since overcome.

The standard campaign tale about overcoming adversity plays out in a candidate’s early years. Walker has one of these stories too, and it’s a doozy: a variation on the theme in which, rather than eventually discovering that he’s a swan, the bullied and shunned “Ugly Duckling” forces himself to become one.

Walker, who grew up in tiny Wrightsville, Georgia, has described himself as an awkward, overweight child, taunted for his stuttering. He exchanged fat for muscle through a physically extreme daily regimen of thousands of situps and pushups and exhausting sprints down a dusty path near his house. Equally relentless verbal drilling took care of the stuttering.

The payoff for his superhuman exertions was superhuman speed and strength and a physique so stunning that, by the time Walker was 17, a sportswriter reckoned it was as if “God just reached down and chiseled this guy differently.” At 6 feet 2 inches and 220 pounds, Walker was a monumental mismatch for hapless high-schoolers and later collegians, whose numerous contusions bore witness to the rigors of bringing him down. In only three seasons at Georgia, Walker broke 11 NCAA and 16 Southeastern Conference rushing records, led his team to a national championship in 1980, and put it in position to claim another in 1982. As a junior, he won the Heisman Trophy that many thought should have been his as a freshman. So deep was the gratitude of the University of Georgia faithful that he was even forgiven for forgoing his senior season to sign a precedent-breaking, multi-million-dollar contract with the New Jersey Generals of the newly minted United States Football League. There he would make the acquaintance of one Donald J. Trump. Meanwhile, his marriage to a white UGA coed caused barely a ripple in a state where interracial unions had been illegal only a decade before.

Should Herschel Walker still manage to eke out a win in November, he will owe it to voters who acted out of blind loyalty, not so much to the greatest Georgia Bulldog ever, but to the party that made him their standard bearer despite his manifest unsuitability.

The special place Walker occupied in the hearts of so many white Georgians of that era was not based entirely on his athletic achievements but also on a carefully crafted public persona marked by a disarming humility and a deafening silence on all matters pertaining to race. As an already-famous high school senior in 1979, he frustrated fellow Black students at Johnson County High School by refusing to join their outcry against the alleged racial insensitivity of the school’s white principal. At the same time, he steered clear of any involvement, either as participant or peacemaker, in Black-white community confrontations. He said he did not feel the need to “represent my people”; he had been raised to believe he “represented humanity,” rather than any particular segment of it.

His views may have endeared him to whites, but did not play well with Black people in Wrightsville, where even today, reportedly, the only Black residence displaying a Walker campaign sign is his mother’s. Statewide, Black support for him hovers around 5%.

Meanwhile, demographics alone suggest Walker’s storied athletic career is not the primary reason why so many white Georgians refuse to abandon him. Nearly half of the state’s current residents were born elsewhere, and regardless of where they hail from originally, scarcely a third of them are old enough to remember his glory days. Trump’s endorsement doesn’t explain Walker’s staying power either. His anointed candidates for the Republican nominations for governor and secretary of state of Georgia failed miserably in the primary election. Only one in five of those who support Walker tell pollsters they are doing it out of loyalty to the former president.

These and other findings in recent polls by CBS and Monmouth University suggest that many likely voters are not buying into efforts to put Walker’s warm and fuzzy side forward. Nor are they willfully blinding themselves to his shortcomings. In the CBS and Monmouth surveys Walker is viewed unfavorably by roughly 48% of respondents compared to 44% for his opponent. Meanwhile, 58% say that they like the way Warnock handles himself personally, while the same share say precisely the opposite about Walker. A similar disparity shows up on questions of moral character. In fact, six in ten Warnock backers profess to be voting for him primarily because they like him, while only one in five who support Walker make this claim.

To understand why this race is still so close, we need to flash back to 2020. Although Democrat Stacey Abrams lost the 2018 gubernatorial race by just 1.4%, Georgia Republicans seemed utterly dumbfounded when Joe Biden carried the state in November 2020 and Democrats Raphael Warnock and Jon Ossoff unseated the state’s two GOP senators in a January 2021 runoff. Less than three months later, an angered and energized Republican majority in the state legislature pushed through SB 202, arguably the most sweeping suffrage-restriction measure enacted anywhere since the 2020 election.

SB 202 signaled that those Democratic victories left Georgia Republicans not only smarting, but scared. Census figures indicate that persons of color account for more than 90% of the 1.6 million-person increase in the state’s voting-age population between 2010 and 2020. The Republicans’ majority in the lower house of the state legislature shrank from 66% to 57% between 2014 and 2020, while their margin in the upper house dropped from 20 to 12. Painfully aware of how quickly Georgia turned purple, they aren’t sitting idle as it trends blue.

In the CBS survey, 86% of Walker’s supporters—more than four times the percentage of Walker supporters who say they actually like him—say they are voting for him primarily to help Republicans regain control of the Senate. A similar share say they see voting for him as voting against President Biden. A squad of nationally prominent GOP politicians will be arriving shortly to shore up these sentiments.

Should Herschel Walker still manage to eke out a win in November, he will owe it to voters who acted out of blind loyalty, not so much to the greatest Georgia Bulldog ever, but to the party that made him their standard bearer despite his manifest unsuitability for the position he would be assuming.