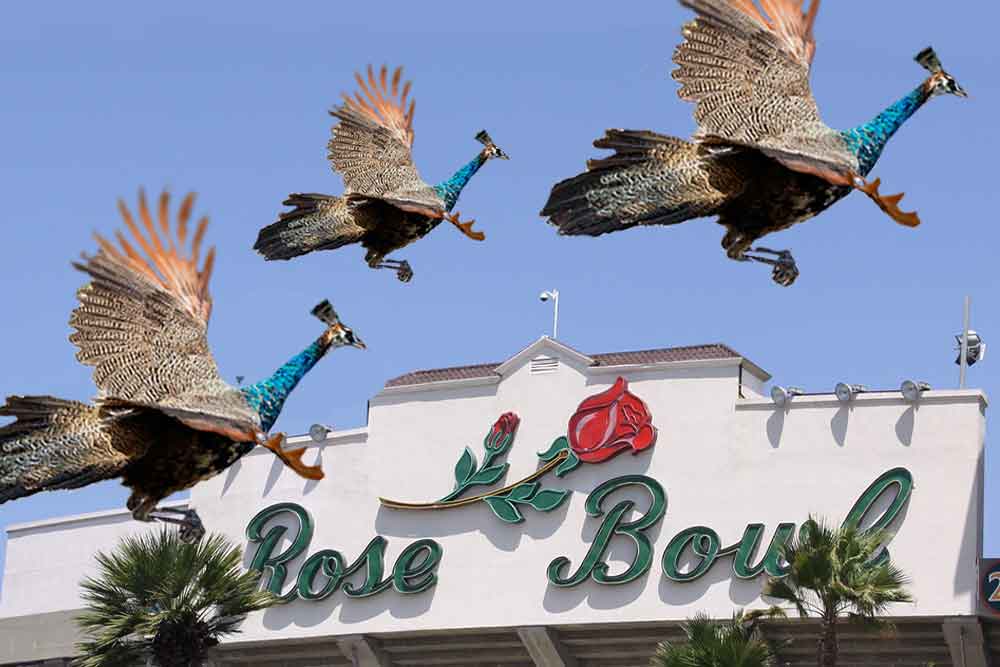 Why don’t you just fly my pride and me to Martha’s Vineyard?

Because we peafowl are tired of being California’s leading scapegoat—I mean, scape-bird.

You Californians like to pretend you’re more humane and inclusive than the Floridians and Texans you denounce, for their cruelty to immigrant neighbors and others who might not look or sound the same as they do. But when it comes to how you treat your blue and feathery neighbors, you Californians are no better than Ron DeSantis.

From the San Joaquin to the San Gabriel valleys, property owners and municipalities are ordering mass round-ups of my kind, without warrant or probable cause. Having unlawfully detained my fellow peahens and peacocks, the authorities then seek to relocate us—without providing counsel or a court hearing—to farms on the outskirts of your major regions.

Imagine being grabbed one day and told you’re moving from Pasadena—the leafy hometown I share with this column’s usual author—to a dusty farm in Kern County, without any choice in the matter. The horror! It’s hot up there, and I’m a cultured, urban hen.

You humans justify such atrocities by claiming that we’re foreign invaders—an “invasive species”—because peafowl originated in India. But it’s pure disinformation and discrimination to call me non-native. I was born and raised right here in Los Angeles County, and experts say I make little or no impact on so-called “native” species.

Indeed, my family has probably been in California longer than yours. I’m likely descended from the peafowl that late-19th-century businessman Lucky Baldwin brought to his land in what is now Arcadia, east of Pasadena. Yet the state committee that oversees bird records still refuses to add us to its list of “naturalized” birds.

So why are you sending us away from the only homes we’ve ever known?

I was born and raised right here in Los Angeles County, and experts say I make little or no impact on so-called ‘native’ species. Indeed, my family has probably been in California longer than yours.

I like to think you’re threatened by our beauty. If you read Nextdoor or the newspapers, you’ll find scare headlines (“Wild Peacocks Terrorize California City”) and claims that we eat too much of the wrong stuff (like your flowers) and make too much noise (we can get loud). But, heck, so do your teenagers!

Still, you complain that we live on the street and poop on the sidewalks. True—but Californians look the other way when their fellow humans do the same things in many city neighborhoods, from L.A.’s Skid Row to San Francisco’s Tenderloin.

Put the public defecation issue aside, and I’d argue that we’re far better community role models than most Californians. We walk everywhere, sustainably, in our hunt for food, while you create greenhouse gases with short drives to the grocery store. We’re social creatures—outside all the time, engaging with our neighbors—while you’re home alone, bingeing Netflix or watching cable news.

And while you’re dividing yourselves with your political obsessions, we don’t even follow American politics. We’re not pro-Trump or super woke. Indeed, you’re most likely to find us in the middle of the road, feathers out—so slow down and don’t run us over! As the poet William Blake wrote, “The pride of the peacock is the glory of God.”

You could find homes for us, but I’m not holding my breath. You’re not exactly rushing to find homes for the humans living on the streets. But at least you try to feed unhoused people. Your largest county, Los Angeles, has made it illegal to give us food.

Of course, your strategy of starving us out won’t work. We were omnivores and foragers before it was cool, and so we’ll keep feasting on plants, flowers, seeds, insects, various small reptiles and amphibians, pet food, cheese, and all the vegetables in your garden.

Still want to get rid of us? It won’t be easy. We’re wild animals, and hard to wrangle. And we’re much more loyal to California than most humans.

After all, we don’t have to pay extortionate rents, giant mortgages, or your high taxes.