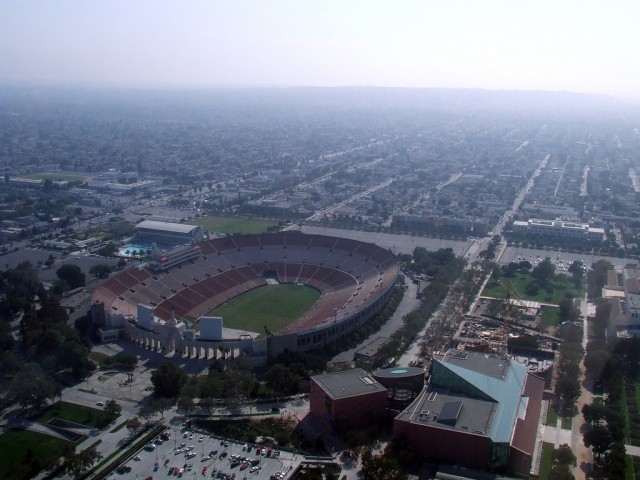 The FBI has raided the offices of State Senator Ron Calderon of Montebello as part of an investigation that, according to published reports, is examining practices at the Central Basin Municipal Water District. Scandals involving the state’s many commissions and special districts have become common. In November 2011, former Pasadena mayor and Ventura city manager Rick Cole explained why this sort of thing keeps happening.

We’ve gotten used to opening up the paper and routinely seeing some new abuse of unchecked power. The most recent one concerned the guardians of the Los Angeles Memorial Coliseum, storied home to Olympics and Trojan horses.

Late last month, the Los Angeles Times took a close look at the Coliseum and found inflated salaries, self-dealing, and details of the sort to make taxpayer blood boil. Not many of us like to see our public officials spending “thousands of dollars on Riviera Country Club golf tournaments, hotels, steakhouse lunches and Bel-Air Country Club breakfasts”–or a leased Jaguar, $2,196 for massages, or “$500 for a procedure to treat snoring.”

The revelations have led to predictable results: the general manager was forced out, two top officials are on paid “leave,” and Commission member Rick Caruso resigned, “ending a stormy tenure during which he clashed frequently with fellow panel members over their stewardship of the stadium,” as the Times put it. Controller Wendy Greuel has announced an audit, and District Attorney Steve Cooley has launched a criminal probe amid inevitable calls for “reform.”

Okay, so let’s talk about reform.

There is no end to these scandals, but for some reason no one makes the connection between ongoing abuses and shelves of thick reports done over the years pointing out the fiscal lunacy of having 6,500 units of “local” government in California.

No, that’s not a typo. California has 58 counties, 482 cities, 72 community college districts, 1,131 school districts, and a whopping 4,779 “special districts.” The latter provide a bewildering array of specialized services–from treating sewage to operating libraries, running airports, and spraying for mosquitoes.

I’m not sure whether the “Coliseum Commission” is included in this staggering total. Its governing structure is even worse: it’s a hybrid run jointly by the State, County of Los Angeles, and City of Los Angeles. In the task of keeping an 88-year-old stadium solvent without booking concerts that lead to the deaths of 15-year-old girls from drug overdoses, Coliseum overseers have failed spectacularly.

Are you really surprised?

Of course, the Coliseum scandal will continue to spawn headlines, and we’ll exorcise some symbolic demons. New management will “clean up” abuses. The Commission will again fade from public scrutiny. And then something else will happen. When unsupervised civil servants work with showbiz and sports promoters, what else should you expect?

What’s far more disturbing than these infuriating, but essentially petty, thefts is that our 6,500 units of government in California are charged with important public functions. They are as invisible as the water and sewer pipes and gas lines beneath our streets, and no one notices them, including the press, unless they develop into giant sinkholes, erupt in stinking scandal, or blow up in our faces.

We are about as far from the ideal of “town hall democracy” as it is possible to travel in 150 years. Not even a reasonably well-informed citizen can keep track of what all these local government agencies are up to or who’s running them.

I first stumbled into this vast labyrinth of hidden government when I was mayor of Pasadena. That put me on three boards governing “sanitation districts”–a polite name for the gatherers of household and business sewage for downstream treatment (and pumping out into the Pacific Ocean).

Since Los Angeles County is made up of 88 adjoining cities, it doesn’t make any sense to have 88 separate stinky plants and pipelines to the sea. That’s why, years ago, some nameless civil engineer corralled 78 of them into a united entity called “Sanitation Districts of Los Angeles County.” Note the plural. It’s a coalition, like the eurozone, governed by 23 boards.

These “boards” met twice a month, and each conducted a separate charade of convening, transacting business, and adjourning. How long did those “meetings” take? About a minute and a half. Each member of each board was paid $100 for this arduous service, plus gas mileage to the Sanitation Districts’ campus in Whittier. There were always fresh cookies and coffee from the districts’ cafeteria. I liked the gooey chocolate chip.

Local elected officials love to “represent” their jurisdictions on these boards. Who wouldn’t? In two years of attending meetings, I never saw a member of the public or the press. Although the Districts at the time had stashed more than a billion dollars in cash in the bank, none of the boards lingered more than a few seconds in adopting the annual “budgets,” which were confined to a single page.

It did occur to me that there was something amiss about all this. So when the second year of budget adoptions came around, I brought the well-oiled machinery to a halt. To adopt the budget for the entire agency, each of the 23 compliant boards has to acquiesce. One day, when there were just two out of three of us board members present, I voted no, causing a one-to-one deadlock.

I was quickly surrounded by panicked, and resentful, elected officials. Eager to cut things short, they quickly consented to my demand that a finance committee be formed to scrutinize the overall budget for more than a matter of seconds.

That was the end of my brief career as a crusading reformer, however. Other duties kept me away from the next meeting. The boards abruptly repealed the imposition of a finance committee and resumed their untroubled operation. My mayoral term ended–along with my $300 monthly stipend and supply of warm cookies.

I’ve never read of subsequent scandals at the agency. But the Sanitation Districts’ manager at the time is now enjoying an annual retirement pension of $271,055.88, the fifth-highest in California. I doubt you’ve ever heard of him, despite the millions of dollars paid out during his tenure to clean up the pesticides and toxic industrial chemicals that the Districts allowed to be dumped into our coastal waters.

If we actually wanted to prevent scandal, we wouldn’t leave the cookie jar unguarded. Everyone knows that having unaccountable agencies leads to abuses. The solution is clear: consolidate these obscure agencies into coherent local governments so that the public and the press can keep an eye on them.

Sure, consolidation comes with its own trade-offs. Bigger government seldom works as well as smaller government. Human greed and sloth can infect big, visible agencies as well as small ones. But the abuses are harder to hide. The tiny city of Vernon is the classic example. For decades it operated like a crooked casino, with a handful of insiders taking obscene salaries and perks. Say what you will about city or county government, but that kind of grand larceny would not go unchecked for three generations.

We’ll never have perfect government, but it’s vital to have someone minding the store. That requires a public understanding of who’s running public functions like water, airports, libraries, parks, and, yes, sports stadiums. Scattering accountability for these among dozens of interlocking and overlapping entities is bad business. It perpetuates bad government.

So instead of announcing belated audits and investigations, let’s dust off the expert studies on how to reorganize local government along sensible and cost-effective lines. That way, way we won’t have to keep reading about bureaucrats getting taxpayer money to treat their snoring. The greater good would be served–even if some people would lose their access to free chocolate chip cookies.

Rick Cole is the city manager of the City of Ventura. His views are his own.