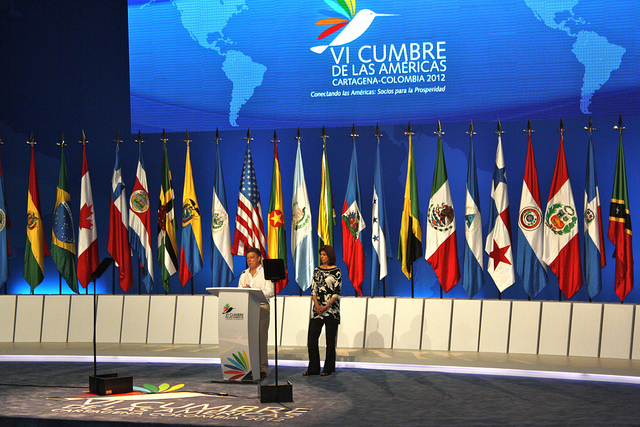 “The only thing that matters in the world is China, Russia and Europe. Latin America doesn’t matter. Consciously. People don’t give one damn about Latin America now.” That was the assessment President Richard Nixon shared with a young White House aide named Donald Rumsfeld when the latter expressed an interest in bolstering his foreign policy experience. Nixon was speaking a mere decade after the Cuban Missile Crisis, at a time when Communists were taking over in Chile and acting up in South America.

Nowadays, many Americans still associate the region with little more than a good fiesta. When President Obama welcomed Mexican President Felipe Calderón (a strong ally in a bloody conflict) to the White House earlier this month, he lightheartedly made mention of the mariachis and tequila that color his memory of their gathering in Guadalajara last year.

Even the Secret Service can’t seem to muster up that much respect for the region. Eleven of its agents, you may have heard, got caught up in the erotic charms of the lovely colonial gem of Cartagena, Colombia, the setting (protagonist, really) for Gabriel García Márquez’s Love in the Time of Cholera. The reserved Secret Service agents, upon finding themselves south of the border, couldn’t help but relax and join in the desmadre (mayhem). “There are people who willingly went to prostitutes and other people who ended up with prostitutes,” was the classic statement of a “senior official” to The New York Times. “Either way, it’s just unacceptable.”

Hilariously, the assistant director of the Secret Service said he regretted “any distraction from the Summit of the Americas this situation has caused,” but he needn’t have apologized. If it weren’t for his agents’ escapade, most Americans wouldn’t have noticed that their president was meeting with more than 30 fellow heads of state from the hemisphere.

President Obama, while personally popular throughout the Americas, found himself on the defensive at the summit meeting. It’s no wonder. Another sign of how little respect Latin America gets in Washington is that everyone knows that the three pillars of U.S. foreign policy toward the region–immigration policy, the war on drugs and the anti-Cuba embargo–are intellectually bankrupt. But hey, who cares, it’s only Latin America. People don’t give a damn. Consciously.

Latin Americans feel indignant about the tens of thousands of deaths their security forces suffer because of the demand for illicit drugs north of the Rio Grande and the lackluster effort by the United States to join the “war” in any meaningful way. Things have reached a point where large swaths of respectable opinion across Latin America are willing to contemplate the decriminalization of drugs, a conversation Barack Obama is not eager to join, certainly not in an election year.

On immigration, Latin Americans are offended by what they consider U.S. hypocrisy. They see a United States addicted to Central American and Mexican immigrant laborers but perfectly happy to exploit them by denying them legal status.

On Cuba, the scent of hypocrisy wafts from north to south as well. It’s a well-established tenet of U.S. foreign policy to engage totalitarian powers culturally and economically in order to erode their dictators’ hold on power, inundating them with subversively American influences that can’t help but spread freedom. That’s the theory, anyway (it’s taking a while in China), at least the one applied to countries that don’t harbor large embittered exile communities in Florida.

There are some nuances on all three issues that cut Obama’s way, of course. Legalizing all forms of drugs isn’t a realistic alternative for any society; immigration policy isn’t entirely the president’s purview nor can it solely be crafted to pursue diplomatic goals, and the Latin Americans themselves are hypocritical in not condemning Cuba’s lack of freedom.

The problem is that the Obama administration is stuck playing defense on these three tired issues because, like its predecessors, it has done little to expand the inter-American agenda. The United States is so distracted by its far-flung adventures and supposed interests elsewhere that it pays little heed to its own backyard. Never mind that the Americas buy up almost half of all U.S. exports and provide more than half our imported oil; Washington just can’t be bothered, certainly not to go on offense to capitalize on the positive trends in the region and strengthen our own economy.

The novelty these days is that many in Latin America are less concerned about Washington, making the low-key contempt mutual. With some notorious exceptions (et tu, Hugo?) the region has been a success story of late. Countries like Mexico, Brazil and Peru are becoming bona fide middle class societies, as American companies that sell into their markets know all too well.

The 2007-2009 global financial crisis was a watershed in north-south relations, a global contagion that was born of financial recklessness in the north and traveled south from there. Mexico had been responsible for devastating global financial quakes in the 1980’s and 1990’s (Southeast Asia, Russia and Argentina could claim similar misdeeds), but this time emerging markets watched in wonder as the titans of Wall Street and Washington failed to practice what they’d preached for years–the famous “Washington consensus” of living within your means, building up reserves, embracing responsible monetary policy.

As a Mexican friend of mine who works in that nation’s Economy Ministry told me last year, “It was like that moment in your life when you realize it’s your parents who are a total mess, not you.” For people throughout the region, it was shocking to discover that the global economy could, for once, get into such a desmadre without them being responsible for it. “Kind of insulting, actually, when you think about it,” a high-level official at the Inter-American Development Bank once joked. “They didn’t need us to get in this bind.”

After all that preaching to spendthrift Latin Americans by the likes of Robert Rubin and Alan Greenspan, the scope of Wall Street and Washington’s hypocrisy this past decade proved breathtaking for policymakers from Buenos Aires to Mexico City. But the main Latin American economies had internalized the lessons from past crises and proved resilient this time around, enabled by healthy balance sheets to protect their currencies and spend on countervailing stimulus programs.

Obama left Cartagena on Sunday without getting other hemispheric leaders to agree to any joint communiqué. It’s simply harder for a U.S. president to do regional arm-twisting. Beyond our eroded credibility, the rise of China is another factor lessening Washington’s leverage. That nation is now the top trading partner of South American commodities powerhouses like Brazil, Chile and Peru.

In the ultimate world-turned-upside-down milestone, the International Monetary Fund’s Managing Director Christine Lagarde visited Brazil, Mexico, and Peru late last year to encourage them to provide support to the struggling Eurozone economies. Today’s aspiring Donald Rumsfelds should take note: Despite all its challenges, Latin America can increasingly be part of the solution to our problems, as opposed to being solely a problem.

Another symbolic triumph for the region will come in June, when Mexico will host a summit of the G-20 nations who call the global economy’s shots. The only bad news is that the summit will take place in Baja’s picturesque resort of Cabo San Lucas–a place a lot of Americans have been known to go a little nuts. Somebody might want to keep an eye on the Secret Service.