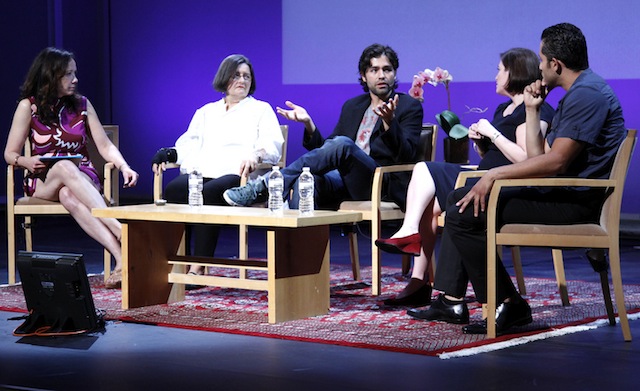 Actor Adrian Grenier sees the paparazzi as storytellers. Us Weekly editor Carolyn Davis publishes their photos to entertain. And celebrity photographer Galo Ramirez is just trying to make a living. But why do the rest of us crave photographs of Brad and Angelina’s wedding, or Jennifer Aniston’s baby bump–the two hottest “dream shots” of the moment–and what makes a great paparazzi photo?

“I think it’s seeing a star doing something you don’t expect them to do, like grocery shopping,” Los Angeles Times editorial writer and moderator Carla Hall told a crowd during a panel about the role of the paparazzi in our world. The discussion took place at the Getty Center, which has been exhibiting celebrity photography in the show “Portraits of Renown: Photography and the Cult of Celebrity.”

Although Grenier has been a target of the paparazzi, he has also looked at their work from another angle, as producer of Teenage Paparazzo, a documentary about the relationship between celebrity and society. “Tabloids are just stories,” said Grenier, stories manufactured by editors. “I don’t think there’s anything inherently wrong with storytelling. It’s what I do–it’s what we do on Entourage.” Our obsession with celebrity only becomes a problem “when that’s all we’re focused on at the expense of some very real things that are happening in the world and happening in your life.” 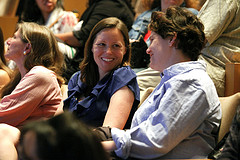 But, asked Hall, don’t the paparazzi sometimes take things too far? And should the tabloids be publishing unflattering photographs, say, of an actress “looking lumpy in her swimsuit with cellulite on her legs”?

Davis responded by saying that she doesn’t work for a tabloid and that Us Weekly and People, where she worked previously, don’t make up stories, and use guidelines to decide what photographs they’ll run. “I don’t want to run photos of people looking lumpy or bad,” she said. “I was a women’s studies major at NYU. I’m very sensitive to how the media treats women and their bodies.” Later on, she added that she won’t publish a photograph that shows a celebrity’s home address or the school where someone picks up her kids.

But “at the end of the day the magazines are motivated for eyeballs and readership because that’s what pays the bills,” said Grenier. “Let’s not pretend that that’s not the real motivation. That is the motivation.” And the readers are willing to pay for the photos too.

International Center for Photography curator Carol Squiers said that even the original Italian photographers for whom the word “paparazzi” was coined were in it for the money. They were originally news photographers, but they figured out that if they became a part of the story–by picking fights with celebrities–they could sell their photographs for a lot more money and become famous in the process. 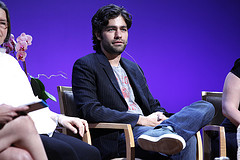 The business is no longer quite so lucrative, said Ramirez, because “it’s oversaturated with pictures.” The right photo can make a paparazzo thousands of dollars, but it depends not just on who and what is pictured but also the context, the quality, and whether the photo’s an exclusive.

Although Grenier admitted to sometimes messing with the paparazzi for fun, he likes them in general. “For the record, these guys are for the most part really cool,” he said. “Every paparazzi I met I got along with.” Is this, asked Hall, because it’s good for your career to be followed with paparazzi? Media attention is the avenue to making money, agreed Grenier, who said he doesn’t have much sympathy for celebrities who complain about the paparazzi, since they’ve chosen their own career.

But what’s the value of paparazzi for the rest of us? Grenier thinks they provide an antidote to the manufactured stories of Hollywood’s old-time star machine as well as a little junk food in our media diets.

“Stars are just like us, but in a way we are just like stars,” said Davis. It’s expanded the way we see celebrities as real people. “It’s much more dangerous just to hold them up on a pedestal, only to see the controlled image,” rather than seeing them as real people doing real things, she said.

Hall asked if paparazzi photos ever can be art.

“You can make a picture or you can take a picture,” said Squiers. “Great photographers make pictures. They understand that a picture is more than just a snap in someone’s direction.” Most paparazzi shots today wouldn’t make it into a gallery–although that wasn’t always true. Hall and Squiers pointed to the work of Ron Galella, who took iconic shots of Jackie O. 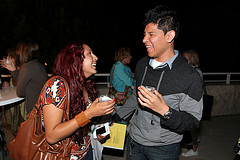 But even if paparazzi aren’t artists, not just anyone with an iPhone can be one. “You’re not my competition unless you can get into somewhere I can’t get into,” said Ramirez. Plus, he has the ability to sell his photographs to outlets all over the world.

Technology has evened the playing field in other ways, said Grenier. Celebrities are competing with reality stars, Twitter stars, YouTube stars, and more.

Reality stars like Kim Kardashian market themselves. “She goes to Beverly Hills a million times a day” in order to be photographed and seen, said Ramirez, who thinks she’s overexposed. “You hear about her all the time.”

“That’s her job,” said Squiers. She’s getting paid for going out and spreading her image. “That’s why she exists.”

In the question and answer session, an audience member asked Ramirez why more women aren’t paparazzi. It’s an aggressive field of work, he said, which keeps you on the run–and gets you screamed at often. “A guy at LAX got punched by Mike Tyson–do you think a woman could take that job? I doubt that,” he said.

Another audience member asked Ramirez why paparazzi don’t take responsibility for the fact that they’re peddling shallow photographs. Could they ever provide the audience with quality work instead?

Watch full video here.
See more photos here.
Read expert opinions on why we crave what the paparazzi has to offer here. 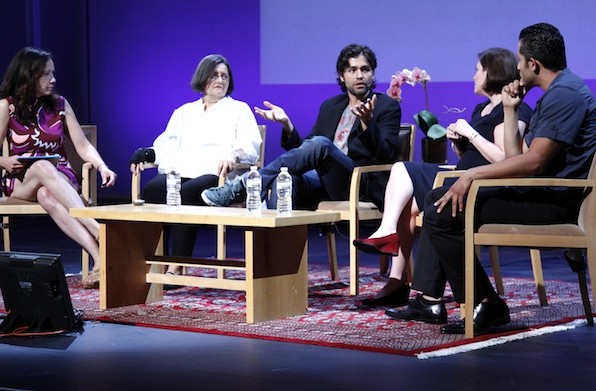