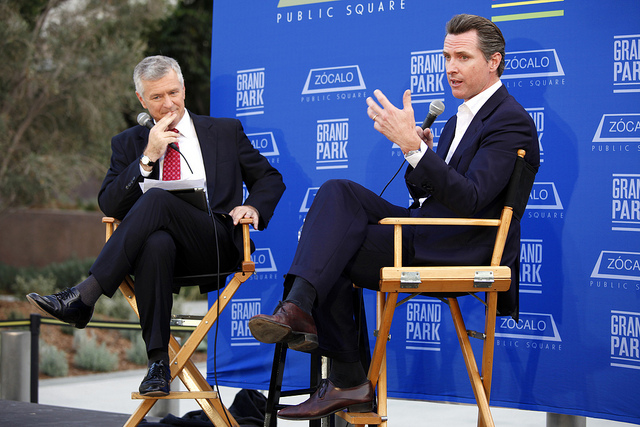 Californians and their leaders need to move beyond longstanding battles over minor policy changes and begin new, broad debates about how to transform the state’s economy and educational system, argued Lieutenant Governor Gavin Newsom during an event in downtown L.A.’s Grand Park, presented by Zócalo in partnership with the Music Center.

Speaking in a raspy voice with his rapid-fire delivery, Newsom—who was questioned at dusk by NBC4 Los Angeles reporter and “News Conference” host Conan Nolan before a large audience—mixed specific policy ideas on everything from climate change to homelessness with broad questions about how California should respond to technological change and build its future.

Newsom said the state and its leaders—including himself—needed to focus more on the long-term and on making dramatic changes. He called for a remaking of the state tax system to catch up with changes in the economy (he specifically supported a sales tax for services). He said state higher education needs to be transformed to adapt to technological change and to extend classes and learning to people who are outside the classroom via on-line tools.

And he spoke in detail about new economic strategies for the state’s diverse regions. In particular, he said more must be done to connect inland California with the more prosperous coast.

Citing a statistic that found the poverty rate for children was 29 percent in the Fresno region, he said, “I’m a Democrat. How can we think we’re doing a good job with that kind of statistic?” He added, “Guys like me need to step it up and start fixing this.”

Newsom’s most extensive and detailed policy comments came on education. He expressed frustration with “fixations” and obsessions with narrow debates about the federal Race to the Top program and “magic bullets” for improving schools, such as getting rid of seniority or tenure.

“We’re missing a fundamental point,” he said. “We still teach the same way we taught 150 years ago.” Newsom called for broad changes in virtually every aspect of teaching: the use of technology, the placement of students into classes and grades (Newsom suggested age not be the primary factor), the timing of classes and the day (more flexible), and the role of collaboration and learning in groups. “I think there has to be a radically different debate” on schools he said.

In many policy areas, California government has failed to respond to revolutions in technology, media and lifestyles. The current digital divide is not socioeconomic. “It’s between government and the rest of us,” Newsom said. “That is an ominous inflection that we need to reconcile.”

In offering a broad critique of the narrow public debate in California and the failure of the state to tackle bigger questions, Newsom was careful to emphasize that he was not criticizing specific officials. He repeatedly expressed his support for Governor Jerry Brown and also praised Mayor Antonio Villaraigosa, whose City Hall offices were just two blocks from the Zócalo event.

Newsom said he was determined to speak out and contribute to debate, but he acknowledged his transition from mayor of San Francisco to the lieutenant governorship had been frustrating, particularly in his first year. He said he came in with great energy to do many things, only to discover that the duties of a lieutenant governor—serving on the governing boards of the University of California and the California State University systems, and chairing an economic development commission and the State Lands Commission—were, while interesting, somewhat limited.

Newsom said he had tried to take the initiative by traveling around the state and to places around the world whose officials have been particularly aggressive about economic development. He said California must be more aggressive and innovative in supporting businesses and jobs and noted that business and economic development officials from places like Virginia, Utah, and Austin, Texas have set up permanent outposts in California, in part to lure businesses away from the state.

California’s economic problems, he argued, pre-date the Great Recession. After leading the country in growth in the post-war decades, California’s economic growth had declined over the past 30 years to about the national average. Being average, he said, was not enough. “We need to have a debate again about greatness in this state,” he said.

Near the end of the evening, Nolan asked Newsom whether he might run for governor in 2014. The lieutenant governor’s answer was that it would depend on what Gov. Jerry Brown does. “If Jerry doesn’t run, I’d like to run,” he said. “I still feel like I have a little bit left in the tank.” 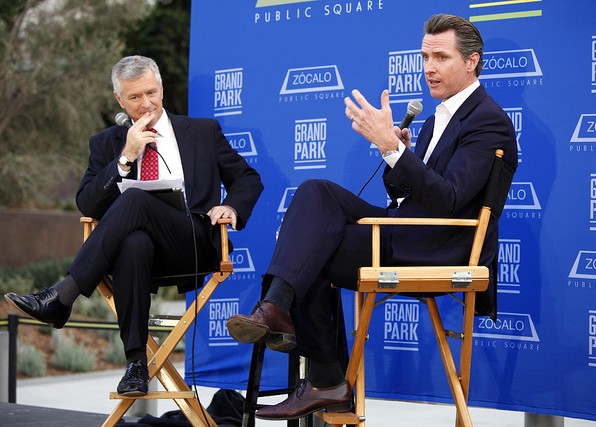 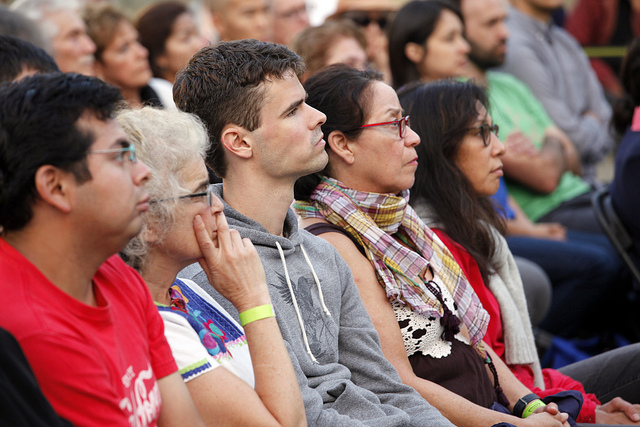 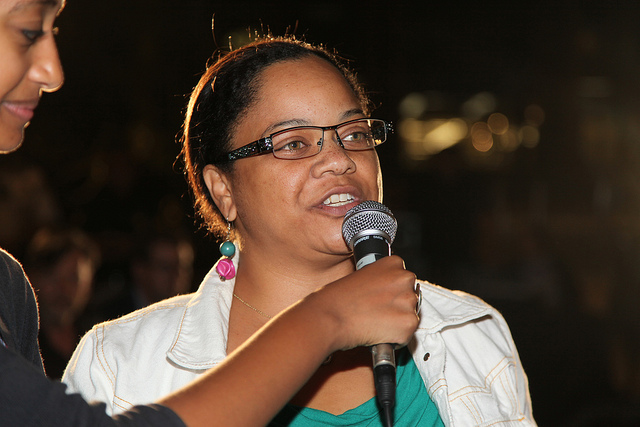 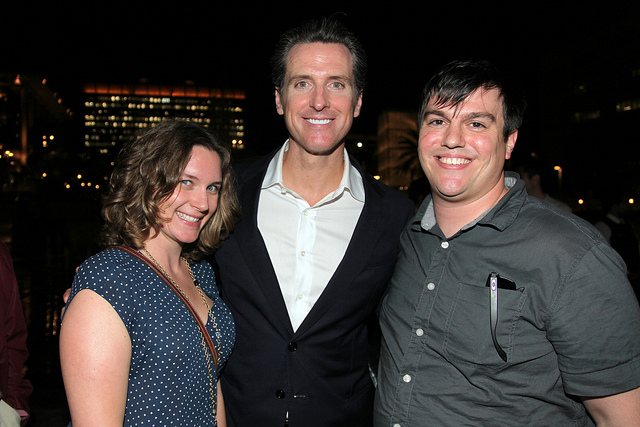