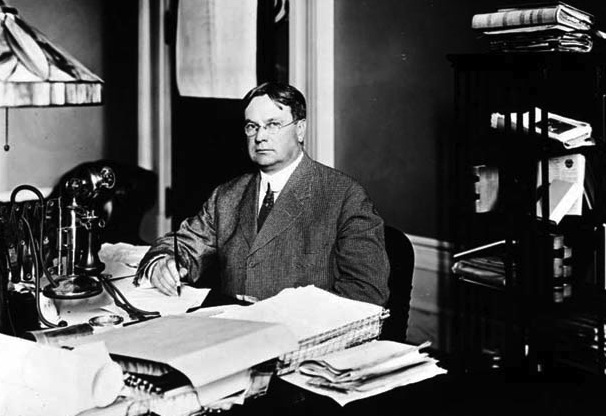 Why is California so hard to govern? One reason is that we’re suffering from daddy issues, and this Father’s Day is as good a time as any to confront them.

The daddy in question is Grove Johnson, father of one of our most revered governors, Hiram Johnson, who served from 1911 through 1917. Johnson is the governor who convinced Californians to adopt the ballot initiative process in 1911. Many of us revere that process, but it has its problems. And we never address those problems, because our media keep repeating a bogus story:

A century ago, the noble and sainted Hiram Johnson created the initiative process to give the people of California the power to fight the railroad and other powerful interests. But over a century, we Californians—and especially our special interests and rich people—have corrupted the people’s process into something Johnson never intended.

This tale is bunk, for two reasons. First, the problems of today’s initiative process (big money, interest-group domination, and public confusion) were present—and much rued—from the very beginning. Second, the biggest flaw of the initiative process—the flaw that makes California so hard to govern today—was not the fault of today’s Californians. It was introduced by Johnson himself.

Yes, Johnson sabotaged the initiative process. But how—and why? The answer lies in the story of a toxic relationship between father and son.

Hiram’s father, Grove Johnson, was a politician who always took the side of the machine. He was dogged throughout his career by charges of corruption. (During the Civil War, Grove had to flee Syracuse to escape charges related to financial fraud.) His son Hiram was born in Sacramento in 1866. They battled throughout Hiram’s childhood (son found father overbearing) and into adulthood, when Hiram worked for reformist candidates in Sacramento city elections and his dad, who served in Congress and the state legislature, backed the establishment.

Things got so bad in 1902 that Hiram and a brother broke up the family law practice and left for San Francisco. There, Hiram became a celebrated attorney and emerged as a leading contender for governor in 1910. But one of his biggest political problems was his dad.

Hiram Johnson was running for governor as an anti-railroad, anti-corruption candidate. Grove was a state legislator who defended the railroad at every turn and made little secret of his opposition to the election of his own son. Hiram was attacked from two sides. One set of enemies were his father’s supporters, who said that the opposition of Grove, who would know the shortcomings his son, was decisive. Another set of enemies were the Grove haters, who suggested that Grove’s opposition was a ruse and that Hiram was a phony reformer who was just as corrupt as his dad.

When Hiram was elected governor, he moved to within blocks of his father’s home in Sacramento—but the two did not see each other. In a December 1912 letter to his father, Hiram accused Grove of “a hatred the parallel of which we have never seen in sane human beings.” A 1915 birthday telegram from father to son, an attempt at peace, read: “I am still lambasting your policies but glorying in your ability to put them into effect.”

As with so many fathers and sons who quarrel, the real problem was that the men were alike in too many ways. Hiram’s biographer Richard Coke Lower wrote that Hiram Johnson “shared with his father not only a fighter’s determination and an eagerness to personalize political contests and call into question the character of his foes, but also a jealous nature, a mercurial temperament, petulance, insensitivity to others, and self-absorption in any campaign he waged.”

That petulance and personalization defined Johnson’s creation of the initiative. Every U.S. state that adopted the process before 1911, and every state and every single country on earth that’s adopted it since, has created an initiative with certain checks and balances. Specifically, legislative bodies have been empowered to fix or amend laws passed by initiative.

But not in California. Johnson’s initiative process made plain that once the people had made law at the ballot box, such laws could not be changed except by another vote of the people. That’s one reason California is nearly impossible to govern. Once the voters have done something, undoing it is extraordinarily difficult.

This was intentional. Hiram did not trust politicians backed by powerful interest groups—people like his father—to have any role in the initiative process. Indeed, they were to be cut out of the process altogether, just as Hiram had cut his father out of his life.

One result: We are governed by ghosts. The errors and decisions of voters long dead linger in statute unamended for decades, creating all sorts of unintended consequences. It’s why, to name just one example, California can’t even change our chiropractic regulations without a ballot measure.

As he left the governorship for the U.S. Senate in 1917, Hiram Johnson made wary peace with his father. But their rift remains embodied in the state constitution and in our initiative process. On Father’s Day, we should take careful note of the real history of the initiative and recognize that, after 100 years, we owe ourselves a reconciliation.