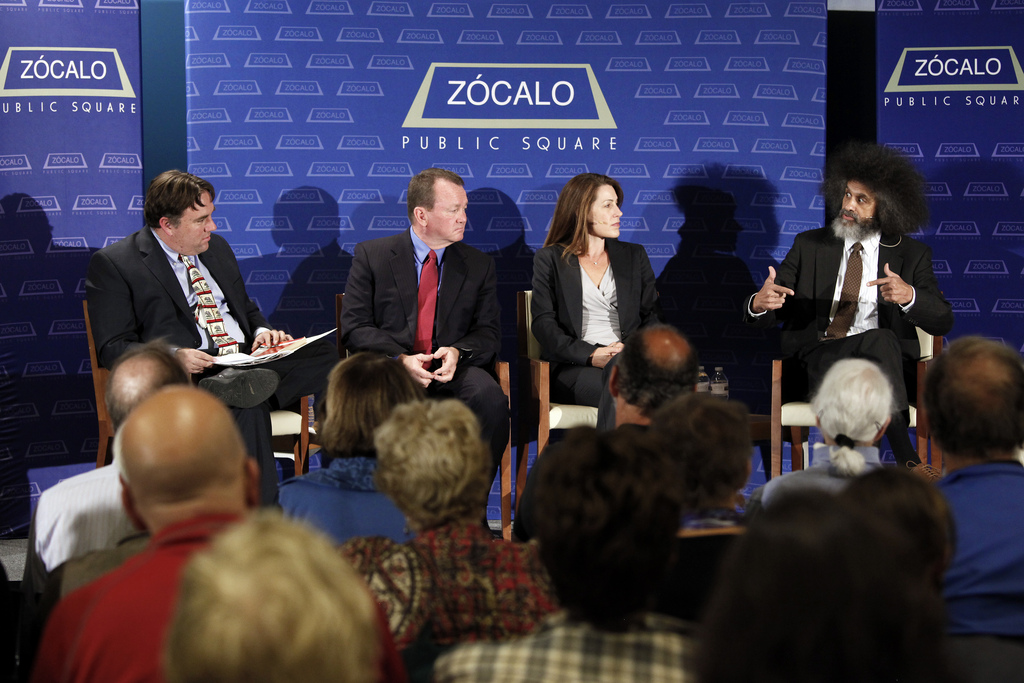 The debate over gun rights is so contentious in America that it often seems the two sides are speaking different languages. The fight continues, bitterly—and yet nothing seems to change. At an event co-presented by Zócalo Public Square and the California Wellness Foundation, three panelists closely involved in the issue offered their thoughts to a standing-room-only crowd at the RAND Corporation on what, if anything, might end this deadlock.

Joe Mathews, the evening’s moderator and Zócalo’s California editor, asked Robyn Thomas, executive director of the Law Center to Prevent Gun Violence, to assess the current climate of gun regulation. Is there broad consensus for action?

Thomas said that in the past year, since the massacre at Sandy Hook Elementary School in Newtown, Connecticut, she’s seen a sea change on the issue. A number of different organizations have formed and stepped up their games—including Newtown Action Alliance, Moms Demand Action for Gun Sense in America, Americans for Responsible Solutions (launched by former U.S. Representative Gabrielle Giffords), and Mayors Against Illegal Guns (started by New York City Mayor Michael Bloomberg). Eight states have passed sweeping gun reform packages, and 13 states have passed more minor legislation. Plus, 90 percent of Americans support background checks—something she said even gun rights advocates will admit “are OK.” Said Thomas, “There is common ground there.”

Yet many Americans continue to cling to their guns, said Mathews, the moderator, and many state that it’s for self-defense, despite the fact that the homicide rate has gone down precipitously over the past 15 years. Why do we feel this need in spite of evidence to the contrary?

Jody David Armour, a legal scholar at the University of Southern California, pointed to the death of Trayvon Martin and acquittal of George Zimmerman as evidence of a fear that persists, particularly “of young, strapping black males who look like they might be from a truly disadvantaged background.” This fear isn’t justified statistically, said Armour, “but that doesn’t make the perception any less compelling or palpable to those who feel it.” Combining the right to self-defense, guns, and social stereotypes about black males in particular makes for a “combustible” situation.

Our perceptions about gun violence are also distorted, said Armour; Sandy Hook Elementary School has become the embodiment of the problem, yet in the inner city, every two weeks, gun violence takes the same number of lives as the Newtown shooting. “Gun violence has a race and has a class dimension to it,” he said. To get at the problem, we have to feel as much empathy for the kids killed by inner-city gun violence as we do for the Sandy Hook kids.

There is no consensus, said McDonnell; rather, divides persist. Sheriffs, for instance, who are elected every four years and are generally in more rural areas, tend to object to gun control legislation; police chiefs, who are typically appointed to their offices in more urban areas, tend to be in favor of it. McDonnell added that the debate often neglects the complexity of the situation—with a focus on weapons rather than mental health, for instance. In all of the massacres that have made the news, the perpetrators have showed warning signs of violence and illness.

Could we, asked Mathews, see a federal redefinition of the mentally ill when it comes to guns?

So what else could break a deadlock?

Armour (of USC) looked back half a century, to a time when activists concerned about government oppression picked up firearms to protect themselves. “If you want to really achieve a lot of gun control legislation in California, bring back the Black Panthers,” he joked. With a number of other constitutional rights up for debate at the moment, he said, maybe this isn’t completely far-fetched.

Since 1996, federal funding for research on gun control has been frozen. Asked Mathews, what don’t we know about guns that we should?

Thomas said that there are 250 people shot every day in America; 82 of those people die. There are homicides, suicides, and accidental gun deaths. We need research on these different types of gun violence, she said. We also need to know how background checks, bans of particular weapons, and changes to licensing and registration work. But there is little money, public or private, going into that research right now.

One person who is putting money into fighting gun violence is Michael Bloomberg, said Mathews. How strong a force is he?

His position as mayor of the biggest city of America plus his money give him a bully pulpit few others have, said McDonnell (of the Long Beach police). We don’t know if his contribution is sustainable or if it can combat the money being spent by other factions. But for now, he is creating a dialogue we might not have otherwise.

Bloomberg, added Thomas, is providing a counter-balance to the NRA’s money in Washington. And he’s combating the apathy of American voters when it comes to guns; it’s an issue gun rights advocates will speak up about and vote on, but many people who are pro-gun control are less likely to vote with the issue in mind.

Is gun violence tarnishing America around the rest of the world, and could concern for our global image make a difference?

Maybe we can get shamed into change, said Armour: “If our brand is superior, how can we have all this carnage in the street?” 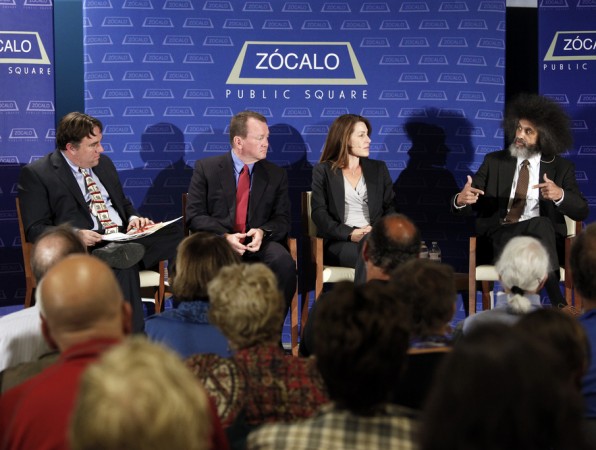 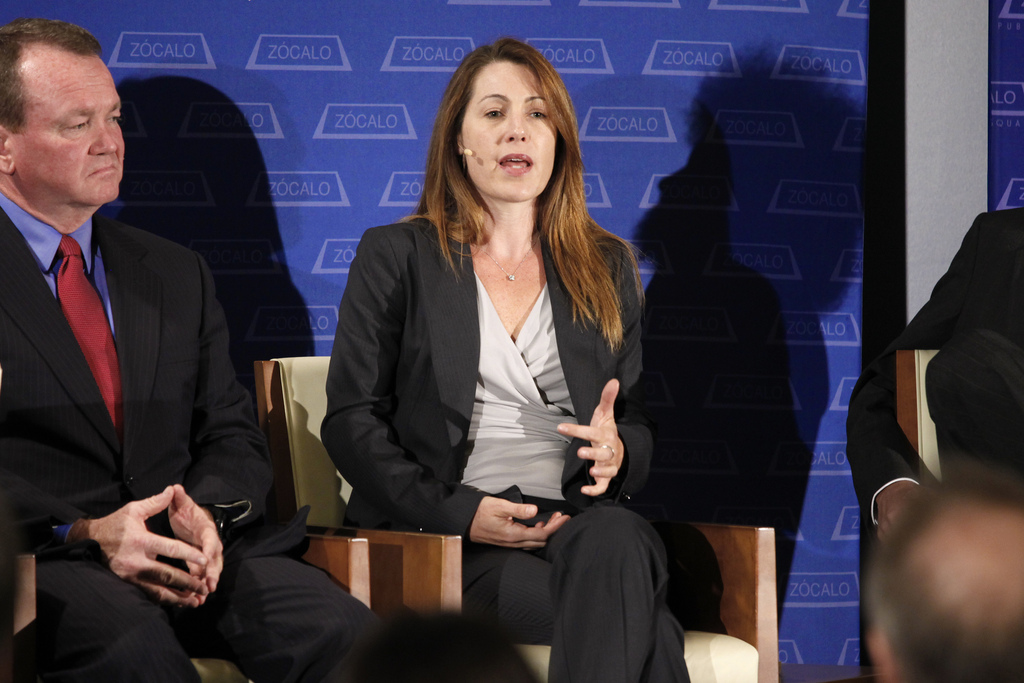 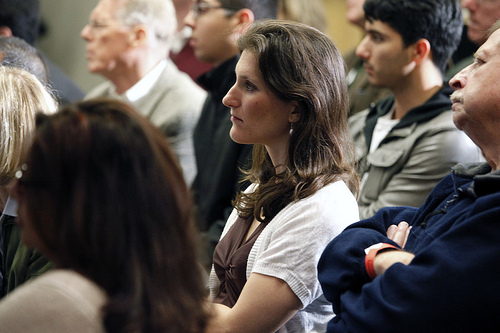 It was standing-room-only in the audience 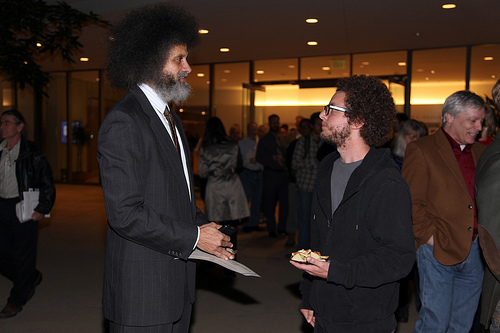 Jody David Armour of USC talks with an audience member 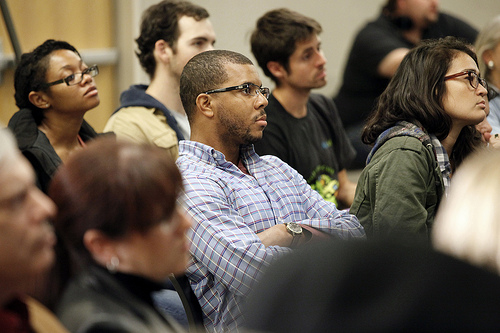 The crowd at RAND Corporation 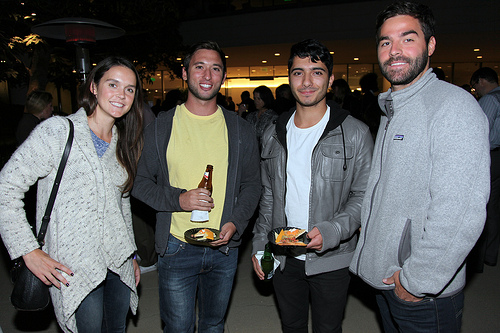 Audience members at the post-game reception