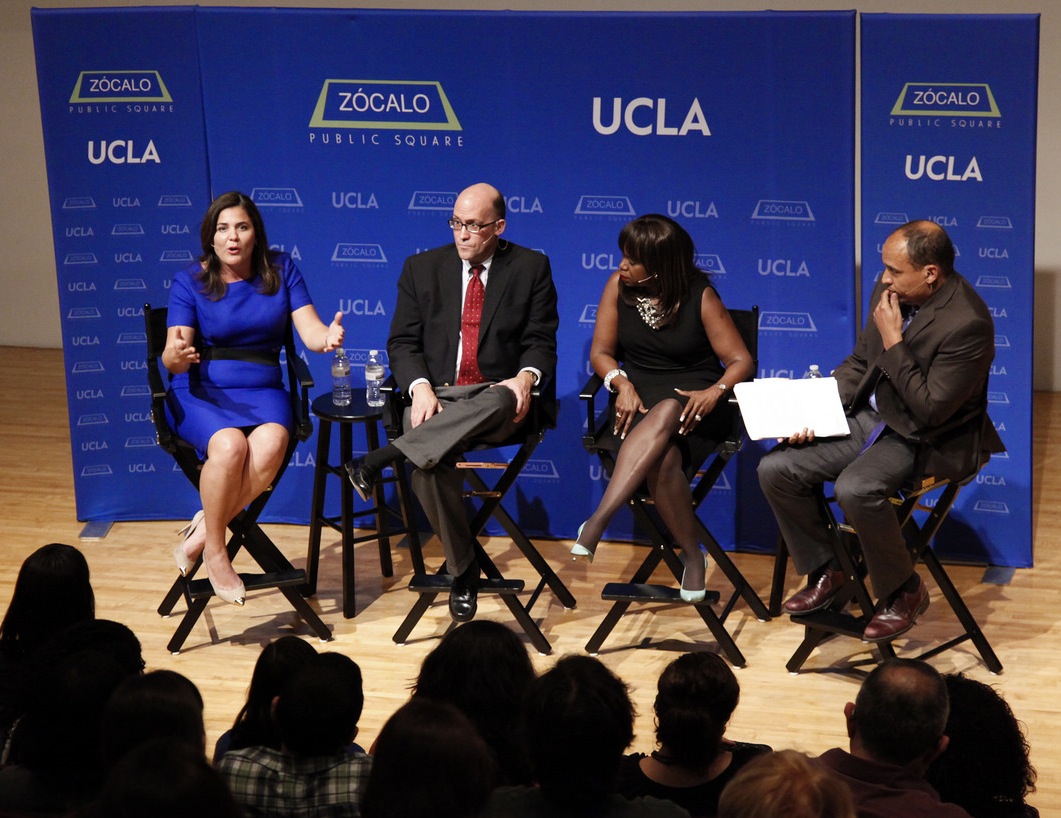 The University of California (UC) system has struggled to reflect the state’s ethnic diversity since California eliminated race-based affirmative action in 1996. Last fall, a video created by a group of African-American UCLA undergraduates about the low number of black male students on campus went viral, sparking conversation throughout California’s public universities on how to make higher education more inclusive. At a “Thinking L.A.” event co-presented by UCLA in front of a full house at MOCA Grand Avenue, a panel discussed why racial diversity matters, how to bring more underrepresented students to campus, and what can be done to make such students feel welcome at universities in California and around the country.

Michele Siqueiros, executive director of the Campaign for College Opportunity, opened the discussion by pointing to the “dismal” statistics and “persistent gaps” in college enrollment between white students and black and Latino students. However, she said, in terms of raw numbers, more Latino students than ever are graduating from high school and going to college. But they’re mostly going to community colleges, and the majority of students aren’t graduating. “When we talk about inclusivity in higher education and we don’t talk about community colleges,” said Siqueiros, “we don’t have a full conversation.”

One bright spot is California universities’ economic diversity. Century Foundation senior fellow Richard D. Kahlenberg said that the state “in some ways is the mirror opposite of the rest of the country” in terms of diversity. There’s “a healthy degree” of racial and ethnic diversity at America’s top colleges. But there’s almost no economic diversity. At the 150 most selective universities, rich students outnumber poor students by 25 to one. However, in the UC system, a significant number—around 40 percent—of students come from low-income households. UC Berkeley has more students receiving federal Pell grants than all the Ivy League universities combined.

Race remains an issue across the country—not just in California, said Youlonda Copeland-Morgan, associate vice chancellor for enrollment management at UCLA. She said that more than 1.7 million people viewed the UCLA “Black Bruins” video because “it’s a story across the nation.” In talking about the isolation they feel on campus, these students “put an exclamation point on this issue,” she said.

Stepping back and playing devil’s advocate for a moment, Los Angeles Times reporter Kurt Streeter, the evening’s moderator, asked the panel to discuss why race matters on campus.

“Context matters in higher education,” said Copeland-Morgan. “Race is a part of that context.”

Siqueiros added that it’s as simple as looking at California, where Latinos are about to become the state’s largest ethnic minority. Educating everyone is not simply about race and opportunity: “It’s about our collective future.”

Even when students from underrepresented backgrounds are at the top of their high school graduating classes, they’re less likely than their white counterparts to go to selective institutions, said Copeland-Morgan. Many of America’s most talented minority students are starting their higher education at community colleges—and they’re not ending up at four-year schools. Because there’s a correlation between selectivity and graduation rate, most of these students aren’t earning degrees.

Once you have minority students on campus, asked Streeter, how do you deal with their sense of isolation, alienation, and even fear?

Siqueiros said that institutions need to take responsibility for welcoming students. She recalled entering Pitzer College in Claremont—just 30 minutes from where she’d grown up in L.A.—and feeling as though she’d gone “to a different planet.”

Kahlenberg pointed to the Posse Foundation as one model for inclusion. The foundation groups low-income and minority students in cities across America into cohorts, works closely with them in their senior year, then sends each group to an elite university together. Kahlenberg added that universities shouldn’t be excused for enrolling low numbers of minority students just because they’re banned from weighing race in admissions. One way to bring more Latino and black students in is to measure families’ wealth rather than their income.

Siqueiros said that it is also time to discuss the UC policy of admitting the top 12 percent of students in the state—and other requirements for admittance. The high school course load necessary for students to enter a UC campus is not the default curriculum in every school in the state. “It’s not the achievement gap but the opportunity gap,” said Siqueiros.

Public universities in Texas and Florida, added Kahlenberg, managed to get the same levels of African-American and Latino representation on campus without weighing race in admissions. Are UC schools too selective for their own good? After all, UCLA, he said, is competing for high-achieving black and Latino students against Stanford University and the University of Virginia.

But the problem is made more complicated by the fact that inequalities begin well before students apply to college—in high school and middle school, and even all the way to pre-kindergarten programs. It’s critical, said Copeland-Morgan, that universities partner with high schools. The number of low-income and first-generation students currently enrolling is a result of high school outreach.

In the question-and-answer session, an audience member asked what could be done to get more minority students to apply to selective and four-year colleges.

Kahlenberg said that sending information by mail to high-scoring low-income or minority students is one successful intervention that costs just $6 per student.

Siqueiros said one study showed that keeping a high school counseling staff working through the summer reduced the “summer melt” of students who don’t make it on to college campuses after high school graduation.

Another audience member asked: Doesn’t California need a new master plan for education, like the one that created the UC and California State system? Californians, the questioner said, no longer believe in the value of educating the state’s children.

We need to communicate how closely we are connected, replied Siqueiros. The older white voter will need to sell her house or get healthcare services—and she’ll get a better price for her property and better healthcare if young people around the state of all backgrounds are better educated. 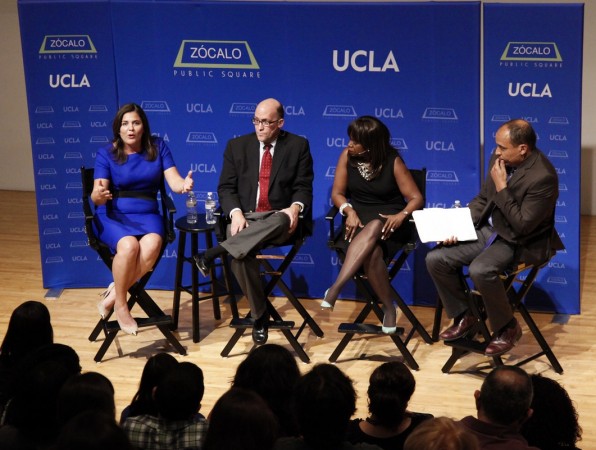 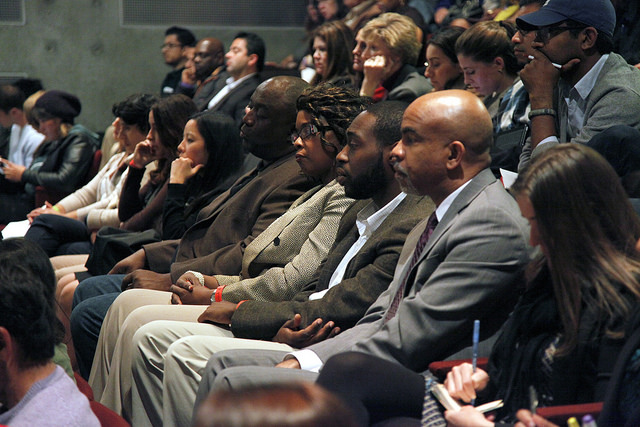 It was a full house at the Museum of Contemporary Art 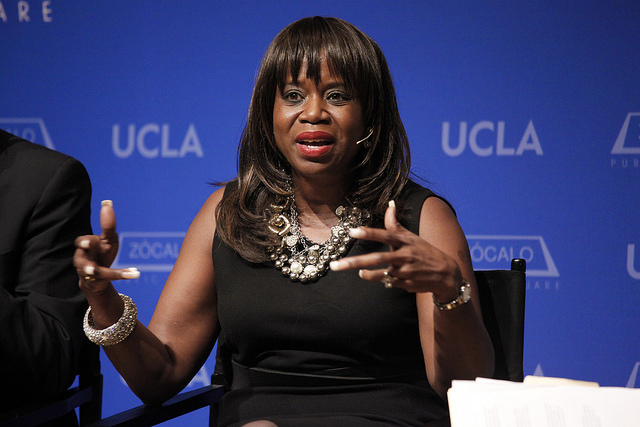 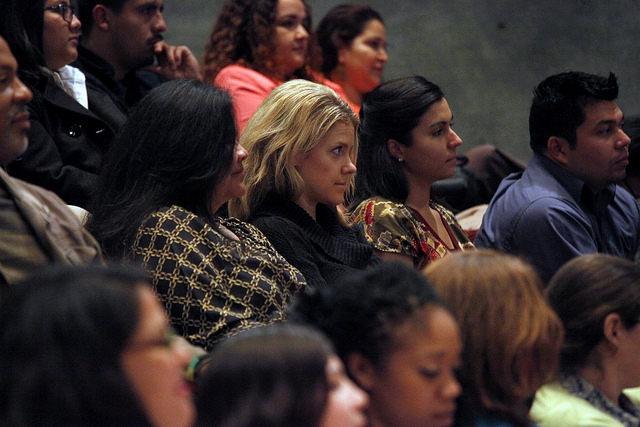 Audience members look on in the MOCA auditorium 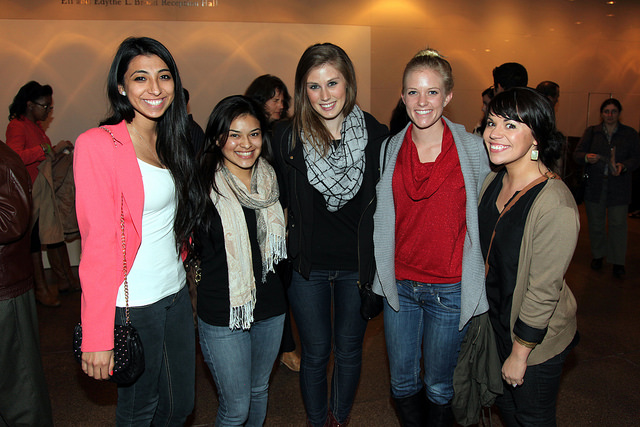 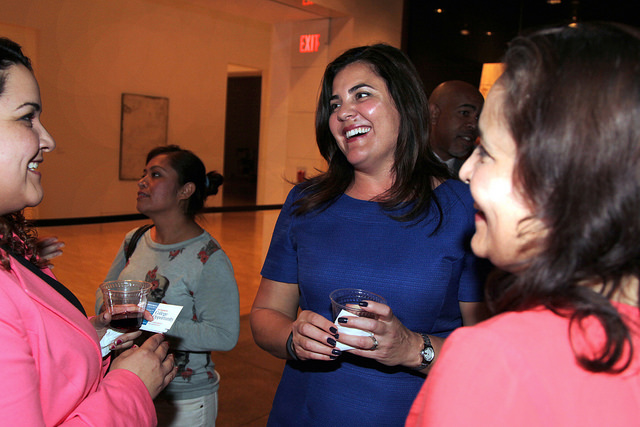 Michele Siqueiros, executive director of the Campaign for College Opportunity, talks with guests