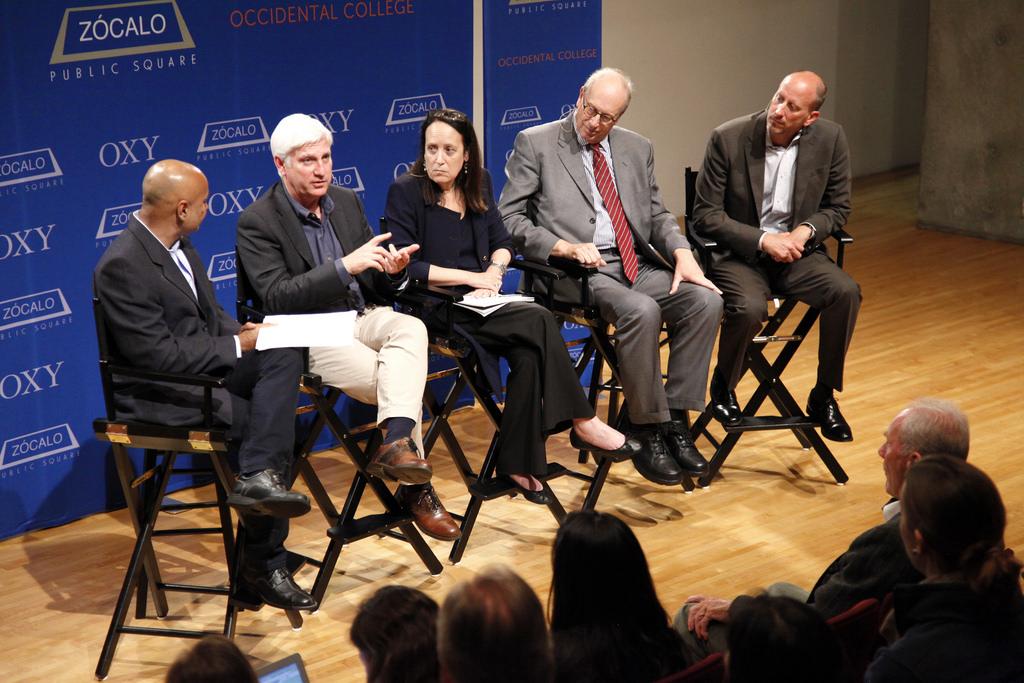 “Why doesn’t everyone in the world have access to clean water?” Occidental College political economist Sanjeev Khagram’s young son asked him this question today when he learned his father was moderating a panel discussion on efforts to bring safe drinking water and sanitation to people around the world. Khagram opened the program, co-presented by Occidental College at MOCA Grand Avenue, by posing this very question to a panel of people from around the American West who study and work on water issues and distribution.

Jeffrey Kightlinger, general manager of the Metropolitan Water District of Southern California, said that his utility delivers water to 19 million people. This means moving water thousands of miles, over thousands of miles of pipes, which takes “a breathtaking amount of infrastructure and investment” in public works that need to last for at least 75 years. It requires a mature economy and a mature society to think and invest that far into the future.

Felicia Marcus, chair of the California State Water Resources Control Board, said that economic inequality is part of the problem. Urban areas with a large concentration of wealthy people—which we have across the U.S.—can afford to pay for good water systems. But in countries with more disperse populations and in communities with less political power, it’s difficult to do the heavy lifting required to build clean water systems. Ninety-eight percent of Californians have clean water—but in a state of 38 million, that 2 percent represents a lot of people who are going without—which, said Marcus “is unthinkable in 2014.”

“Water is more capital-intensive than any other utility,” added Arizona State University sustainability scholar Michael Hanemann. Before you can deliver a single drop, you need a water source, a dam, an aqueduct, a treatment plant, and a distribution system. It’s immensely difficult to finance this everywhere. Raising money to build the necessary infrastructure is complicated by the fact that, even in poor countries, people have access to some kind of water—though the source may be polluted or require hours of travel each day. Many families in these places, given the choice between pipe water and electricity, would choose electricity to improve their daily lives.

However, said Natural Resources Defense Council water program director Steve Fleischli, the lack of improved sanitation that over 2 billion people live with has enormous implications. For young girls and women, not having access to a toilet can be life-threatening. And a contaminated water source can make people sick, preventing them from going to work and school. But fixing sanitation issues is challenging. Outsiders will go into a community and build a toilet—only to come back two years later and find it’s been turned into a storage shed for rice because it’s one of the only places in the village that’s waterproofed. Sanitation and water projects need to take local needs and wants into consideration—and people need to be taught how to fix something if it breaks.

So where, asked Khagram, are people innovating in water and sanitation?

Kightlinger said that Southern California is now recycling close to 10 percent of its water. This rate leads the United States. But in Israel, up to 75 percent of water is recycled—which causes a different set of problems with brine and salt accumulation.

Fleischli said that wastewater recycling and storm capture present opportunities for innovation, and that smaller, local efforts—like composting systems—can make more of a difference than big, expensive infrastructure projects. “Taking a bottoms-up approach is more innovative these days, and it really needs to be embraced,” he said.

Khagram pointed to a program he helped set up in South Africa, Water for Work, which hires historically unemployed people to clear water-intensive, alien vegetation from the landscape. Connecting environmental issues with other local problems, he said, is an important area of innovation.

Marcus agreed that placing our problems in separate siloes is dangerous. In California, it doesn’t rain often, but when it does, we spend large amounts of money getting storms and floodwaters out to sea. The rest of the time, we spend our money and energy importing water. “There’s a whole integrated way we could capture water,” she said, “so it doesn’t have to go through a sewage system and come back to us.”

In Southern California, said Kightlinger, we’ve already come a long way in decreasing our water use—we use 20 percent less water today than we did in 1990. But that’s only scratching the surface. The challenge ahead is to pick and choose what adjustments we make; it’s impossible to build 200 years’ worth of infrastructure in one generation. And there’s a danger in doing too much: Australia spent $10 billion in seven years building desalination plants. Today, 75 percent of those plants are out of use.

Marcus said that for too long, conversations about water have been a “clash of the titans,” with people arguing for just one thing—recycling, storage and conveyance, or conservation. Now, we’re seeing people pull together in the face of climate change. “We’re not going to make it unless we do all of the above,” she said—and protect and rebuild our ecosystem, too.

But people still don’t tend to work on solving water problems until they reach a crisis point. How, asked Khagram, can we get people talking and thinking about water: “How do we make water sexy?”

The panelists agreed that our water systems—particularly in Southern California—are so good that we take the resource for granted. And so, they said that like it or not, it takes that rare, severe crisis for water issues to become top-of-mind for most of us. 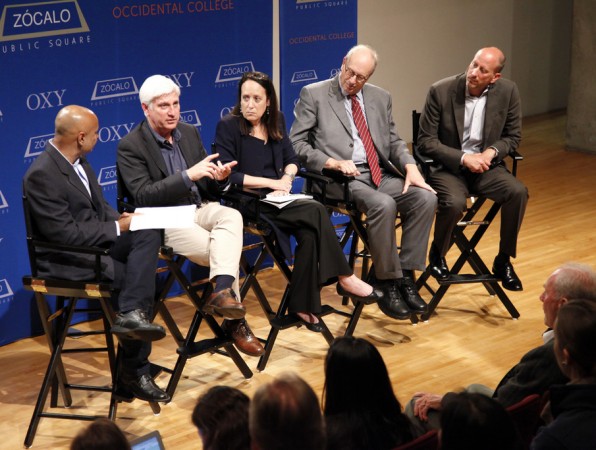 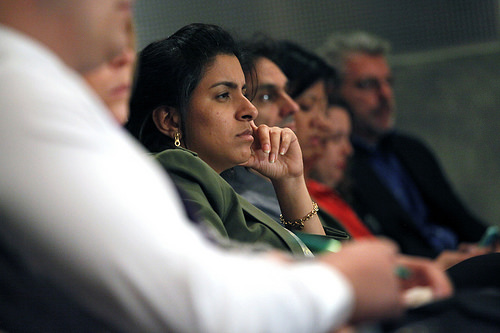 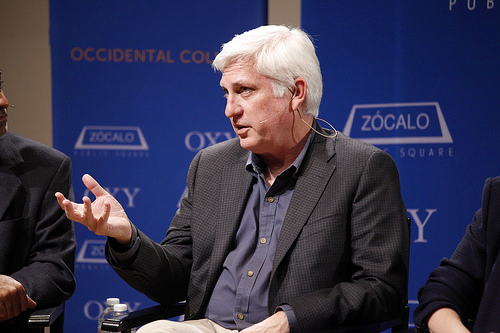 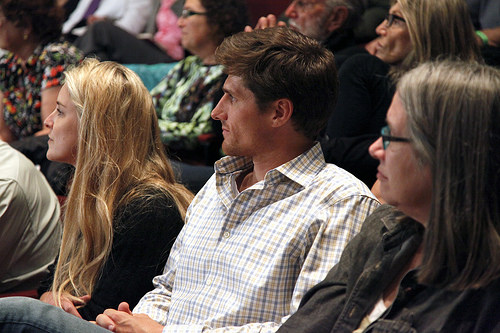 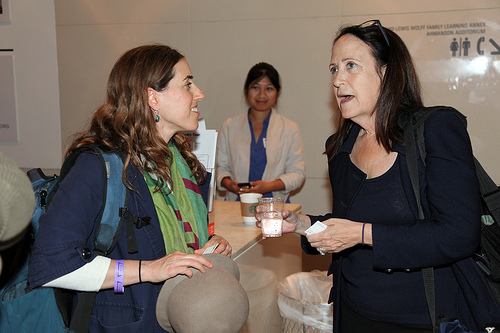 Felicia Marcus, chair of the California State Water Resources Control Board and a panelist, talks with a guest 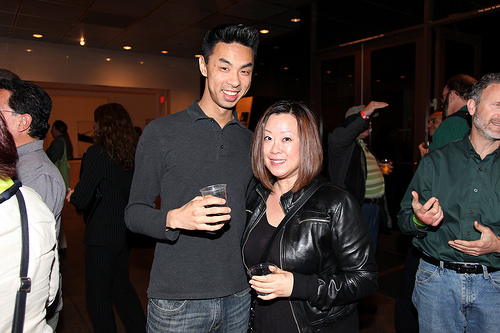