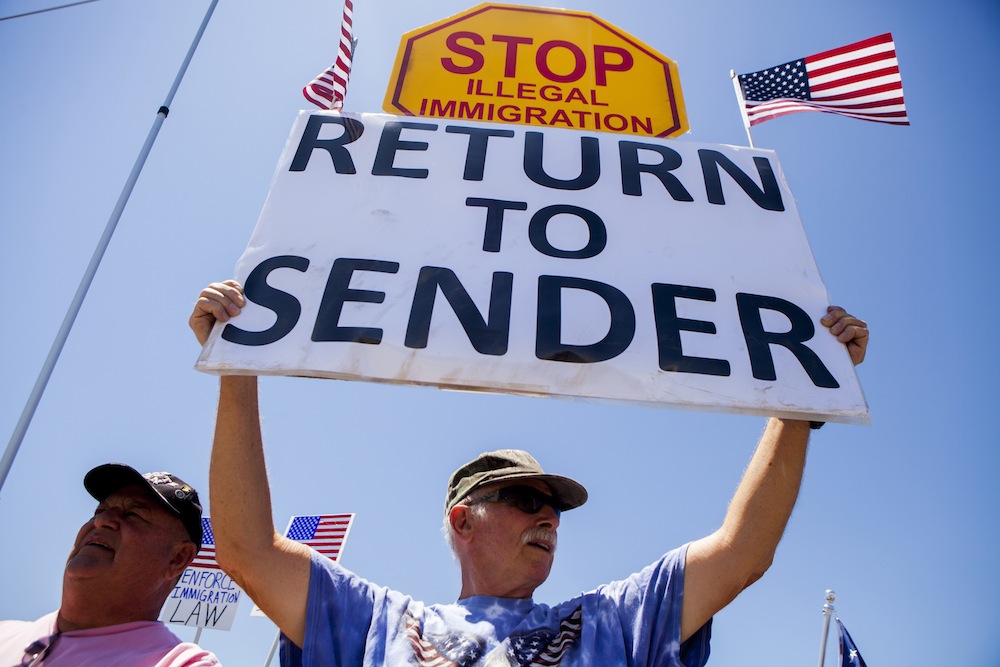 To: The People of Murrieta, Calif.
From: Joe Mathews
Re: Recent Damage to Your Global Reputation

You can still be “The Future of Southern California,” as your city’s motto promises, but it won’t be easy after these past few weeks.

There’s no denying that Murrieta, incorporated in 1991, is one of the fastest-growing places in the state. Your population has quadrupled to more than 100,000 over the past quarter century. More than 30 percent of your residents are children. And you’ve embraced a successful growth strategy based on encouraging people around the world to invest and settle there.

But then came the Central American refugee crisis, and the self-destructive decision by more than a few of your citizens to immerse your city in one of the country’s divisive, hateful political debates. The scene outside your U.S. Border Patrol station—the opening of which eight years ago was considered a city triumph, bringing 148 jobs to town—introduced Murrieta to much of the world. And it was an ugly greeting. A small but nasty group of protestors blocked the entrance for buses carrying refugees, reported to be women and children, and the Border Patrol decided to turn the buses around. Aggressive protests have continued since. Comments by local politicians opposing the processing of refugees in your town, and outright racist statements by citizens at a town meeting (all covered by the nation’s media), cemented an image of Murrieta as a hateful place. “Shame on You, Murrieta,” blared one L.A. Times headline.

That hateful image is, of course, unfair. As you have pointed out, many of the protestors weren’t from Murrieta. The media-amplified comments of a small number of citizens shouldn’t color our judgment of the 107,000 people living in your relatively diverse, vibrant, growing community. But at the same time, the lack of aggressive pushback by civic leaders against the protests and hateful comments raises legitimate questions not merely about the heart of the town, but about your collective brain. The last few weeks suggest your real problem is that too many of you don’t know your town or understand its interests.

Because to know Murrieta is to understand that there are few places in California as dependent on the goodwill of outsiders—and on having a welcoming reputation—as your city.

Yours is in many ways a city of refugees. You are mostly from somewhere else; you came to Murrieta to escape coastal California’s high housing prices, or fears of crime in other communities, or problems in your home countries (14 percent of Murrietans are foreign-born, and 23 percent speak a language other than English at home). Your city’s rapid population growth would have been typical of California communities in the 1980s, but in today’s slow-growth, low-birth-rate California, you are an outlier. This is a good thing. Except that cities known for their hatred don’t tend to remain magnets for people seeking a better future.

For now, continued population growth is an imperative for your local economy. Murrieta’s biggest employers—the school district, the Southwest Healthcare System, big retailers like Target, Wal-Mart, and Home Depot—all need more people to grow. Your location—at a logistics-friendly intersection of freeways just 80 miles from the border with Mexico and the ports of Los Angeles and Long Beach—positions you well to benefit from expanding global trade.

None of this is news to the more enlightened among you, who understand how important your global orientation is. Your city’s website features a video boasting that three of Murrieta’s city council members and two top city administrators have lived overseas. And some of your strongest local institutions—your churches—treasure their international ties, from immigrant pastors to successful outreach programs to Africa, China, and Mexico.

Most notably—and ironically, given the events of the past few weeks—your economic development relies heavily on attracting foreign investors. You’ve had a terrible time getting bank financing for development. And the state of California, with its budget cuts and elimination of redevelopment agencies, has made life difficult for cities, particularly newer municipalities in your part of Riverside County. So your city turned to the federal government’s EB-5 Immigrant Investor Program, which grants green cards to foreigners who invest between $500,000 and $1 million here.

Yes, that’s right: What would the anti-immigrant crowd who’s been cheering on your city for turning back refugees think if they learned that you’ve been paying for development by giving legal status to foreign investors? Particularly if they found out that they’d inadvertently been supporting these 20-plus investors (now green card holders) from China and other Asian countries by buying organic local produce at the market in the Olivewood development across the street from your city hall?

In this context, the lack of a quick, decisive response to the anti-refugee protests and rhetoric looks like self-sabotage. Your mayor, Alan Long, instead of distancing the city from the divisive national immigration debate, kept wading into it, and even positioned Murrieta as the victim of global attention: “The world showed up on our doorstep,” he told CNN, disingenuously, given your city’s aggressive courtship of the world. Your city manager Rick Dudley responded more wisely, acknowledging that “in some ways we fell down in the face of the challenge” and calling recent weeks “a loss for the city of Murrieta … It made this extremely compassionate community look heartless and uncaring. ”

But to restore your essential reputation for openness to the world, you need to go beyond apologies. You must come together to make clear to the world that Murrieta unequivocally empathizes with the plight of the refugees, wants protestors seeking to score cheap political points off a humanitarian tragedy to stay away, and supports the Border Patrol and other authorities doing what they must do without interference.

Remember this: Just as it is unfair to judge all of Murrieta by its least welcoming voices, it is unfair to make blanket statements about the motives and circumstances of those who come across our borders. All Californians should treat these refugees with respect, and allow them to have their cases heard.

That’s not merely the humanitarian and American response; it’s also the adult one. Your city is now 23 years old. It’s time for the Future of Southern California to grow up.