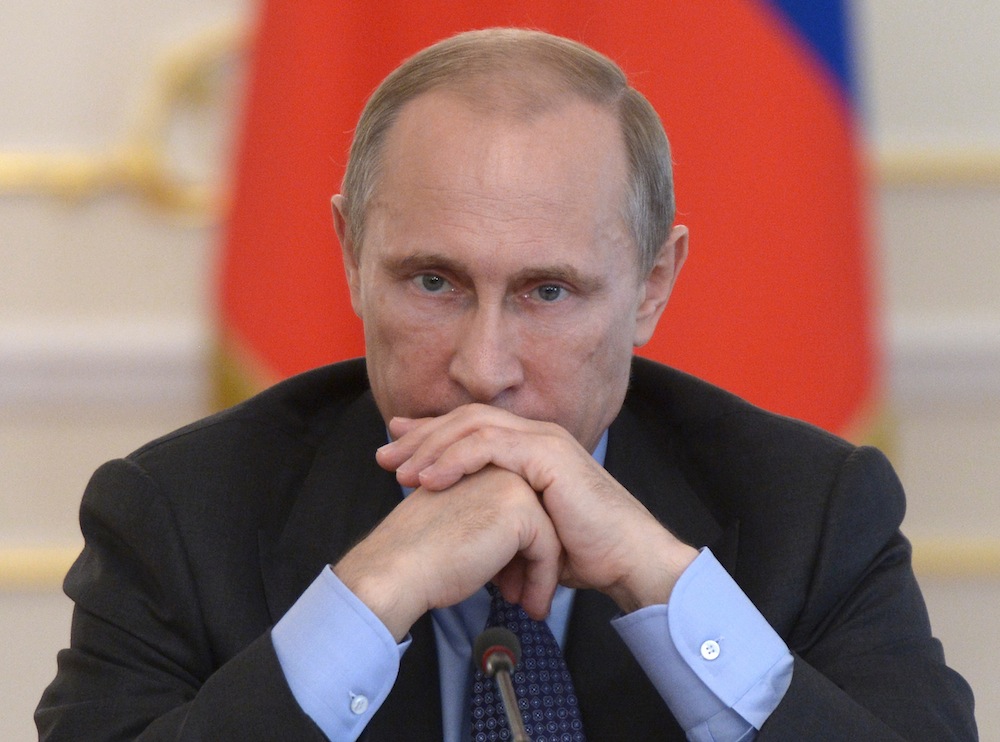 Here are two words Californians should say to Vladimir Putin:

California, with its historic reliance on defense-related industries, never quite recovered from the end of the Cold War. Today, Los Angeles has fewer jobs than it did in 1990. Fortunately, Putin seems intent on giving us a new Cold War.

Let’s stipulate that Putin’s crushing of dissent at home, his seizing of the Crimea, his wars against Ukraine and Georgia, and his bullying of European neighbors are bad for the peace and security of the world. But all this Russian madness—not to mention the threatening, nationalistic expansionism of Putin’s Chinese ally President Xi Jinping—presents an opportunity for California.

The belligerence of Russia and China could boost a host of California industries. Aerospace could benefit from increasing insecurity among Russian and Chinese neighbors, since more countries will be inclined to increase their spending on defense, and to curry favor with Uncle Sam by buying American. California’s space industry could become much more important as the United States moves from collaborating with the Russians in space to competing against them—and against a growing Chinese space program. And Silicon Valley’s data security firms are already booming in part because of widespread concerns about Russian and Chinese hackers, not to mention the intrusive behavior of U.S. intelligence agencies.

The threat of Putinism also could change the politics of oil and natural gas production here—more domestic production serving as another counter to Russia’s oil-based economy. (Maybe we’ll hear politicians from the San Joaquin Valley, where development of the Monterey Shale’s natural gas could be an economic game-changer, accuse fracking opponents of being soft on Russian imperialism.) Alternative energy businesses—from wind to solar to geothermal—should also find it easier to wrap their pitches in national security terms. It’s no longer about merely ending our reliance on Mideast oil, but also about declawing the Russian bear.

California’s softer industries could prosper too. Hollywood, which has struggled to develop compelling bad guys since the end of the Cold War, can mass-produce Russian villains again. As for tourism: With headlines of downed aircraft and bombings everywhere, isn’t it tempting to stay closer to home and go to Disneyland, or check out the minions at Universal Studios?

The potential here is for a partial revival of the 20th-century California growth model, which was based on embracing the world—and its conflicts. The state’s strategy was to develop ideas and an educated citizenry by investing in affordable, world-class higher education; turn those ideas and innovations into products like planes and weapons that could fuel international growth and wars; then welcome the ambitious people fleeing those conflicts (sometimes on planes we built) into our industries and universities. The big question that Putinism poses for California is whether our governments, our industries, and our people are still in a position to exploit the misfortune of others.

The pessimistic view: Our dysfunctional governing system will keep us from seizing the moment. The optimistic: Our persistent economic struggles (at least outside Silicon Valley) and the dangerous provocations of Russia and China might spur us to action. Our country has been mired in Middle East wars and has struggled against terrorists for years, but those threats and challenges seem awfully remote, and diffuse, to Californians. Formidable nuclear-armed nation-states seeking to reclaim their lost empires, on the other hand, might get our attention.

It is the military-industry complex where the opportunity for a Putin-inspired California comeback is greatest. The aerospace industry made the state a success—and brought millions into the middle class (including my grandmother, a line worker at North American Aviation), produced innovations from propeller-driven airplanes to satellites, and remade the state’s culture (historian Peter Westwick has shown how modern surfing owes a debt to aerospace engineers). Today, the industry is smaller but still cutting-edge, producing drones, satellites for commercial purposes, and space start-ups like Elon Musk’s SpaceX.

There is precedent for an aerospace revival here. After collapsing in the post-Vietnam funk, aerospace rebounded in the ’80s, headlined by the F-117 Stealth aircraft, the B-2 bomber, and the space shuttle. But more recently we’ve missed chances for revival. As defense spending increased after 9/11 and the industry expanded in other states, California’s aerospace continued its decline. The blame for this goes in part to California’s fractious Congressional delegation, with its fatal combination of conservative spending hawks and liberal pacifists, and a state government consumed with its own budget problems.

As important as stopping Putin is stopping Texas or another state from becoming the next California, the place the world turns to in its hour of need. Putin’s pronouncement that he will revive his own aerospace industry, at the same time the Chinese military continues it buildup, should rally us to offense. Putin’s madness and Chinese expansionism have created a new Sputnik moment, one that should also spur us into investing in science and math education—California needs hundreds of thousands more technically and scientifically skilled workers, for good times and bad.

The state has established a military council and created some incentives, but it should go further, and provide seed money to fund business investment and research that serve both national security and the state’s long-term interests. How to pay for it? Why not establish an emergency “Putin tax” on certain items (hard liquor, cigarettes, oil, and big houses would be fitting) or a “Putin break” from certain regulations for priority industries?

It’s time for the governor to call a “security council” summit of California officials, business leaders, and scholars. The perfect venue would be Fort Ross State Park, in Sonoma County, site of a settlement established by the Russians in the early 19th century, with the goal, not yet realized, of colonizing America. It’s a beautiful place, and a powerful reminder that there are few things more enduring than the need to keep Russians czars in their place.