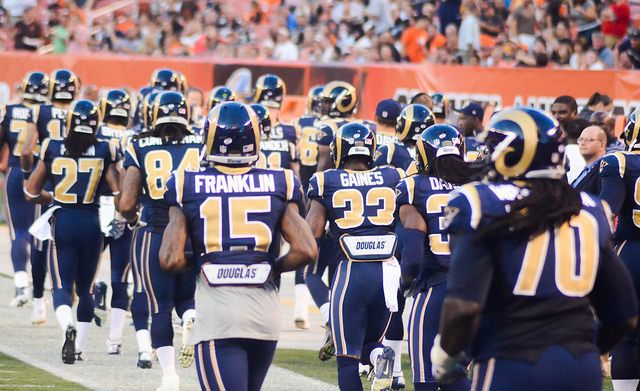 Mayor Eric Garcetti is wrong when he says Los Angeles shouldn’t give taxpayer dollars to the National Football League. To the contrary, L.A. would be wise to pay the NFL to stay away from Southern California. Permanently.

Unfortunately, 20 years after the Raiders and Rams left town, the very bad idea of luring the NFL back is gaining momentum. The city of Los Angeles just extended a downtown stadium deal agreement that was expiring. The NFL is surveying rich Angelenos to see if they’d buy season tickets. Garcetti himself says it’s “highly likely” a team will relocate here in the near future.

So there’s no time to waste in organizing an all-out blitz to stop the drive for a new team before it reaches the goal line. The arguments against bringing the NFL are so strong and numerous that I can’t list them all in a short column, but here are some of the all-stars among them:

An NFL team would add to our deep bench of dubious celebrities.

The L.A. media already has enough athletes and other celebrities to distract TV stations and newspapers from covering things that actually matter; we don’t need to add a team of rambunctious football players to our Kardashian culture. We also don’t need our wealthiest citizens, who give depressingly little to charities right here in L.A., blowing their money on football luxury boxes.

And let’s not forget our recent history with rich sports team owners. After the damage Frank McCourt and Donald Sterling did to our civic fabric, why risk bringing another rich and crazy person to town?

An NFL team in L.A. would cannibalize existing businesses.

Studies show that adding a pro sports franchise doesn’t add to a city’s wealth. Instead, it redistributes existing dollars away from other entertainment options to the new franchise. (Sporting events also create traffic jams, of which we already have too many.) And since the three teams likely to relocate to L.A. are the Oakland Raiders, San Diego Chargers or St. Louis Rams, we’d be stealing from our fellow Californians, or from pitiable Midwesterners who don’t enjoy L.A.’s wide range of cultural offerings. That’s not nice.

A new team would be wasteful.

The NFL requires cities to build a new football stadium in order to get a team–but that’s an outrageous waste in L.A. given all the stadiums we already have. Pasadena has spent nearly $200 million modernizing the Rose Bowl, just 10 miles north of the proposed downtown NFL stadium site. Less than 3 miles south, USC is refurbishing the Coliseum. And baseball’s Dodgers and Angels play in stadiums fully capable of hosting NFL games.

Yet the NFL persists in demanding its own new palace. If you want to see what can go wrong with a brand-new stadium, check out the 49ers’ Levi’s Stadium in Santa Clara, which has been beset by problems with parking, traffic, concessions, the field surface, and fan violence.

A new team might be bad for Los Angeles’ own football fans.

Just as ocean life often thrives around collapsed oil rigs, the absence of the NFL has allowed a delicate football ecology to flourish in the City of Angels. Our TV stations air the best pro games from across the country because there is no local team whose games must be broadcast each week.

In a strange way, we have become a football capital, the United Nations of pigskin. On Sundays in places like Westwood or Old Town Pasadena, people dressed in the jerseys of virtually every football team in this country walk the streets on their way to bars showing their team’s games. These often are the colors of the hometowns of these transplanted Angelenos (or of their significant others), and football provides them a way to connect back to those places, and to family and friends.
For those who want their football live, we have two top college programs (UCLA and USC) and the best high school pigskin in the country. And if you absolutely must see the NFL in person, the Chargers are just a short, pleasant train ride away in San Diego.

Despite all this, many of our leaders—including our mayor—insist that a city of our size and importance should have an NFL team. They also promise that such a team will cost L.A. nothing. If you believe that, I’d like to take a bet from you on the Raiders winning this year’s Super Bowl.

The city’s current deal for a downtown stadium provides for a private company to pay for a stadium. But that stadium would be constructed on public land, and the deal requires the city to sell some $300 million in bonds to build new convention space. Of course, the NFL hasn’t embraced even this proposal, because the league, which has long depended on public subsidies to build stadiums, doesn’t want its owner paying the $1.5 billion cost of a new stadium. The league has been shopping around Southern California for better terms; one leading contender is the city of Inglewood, where the Rams owner has acquired land.

The NFL could offer other lures to draw public subsidies–giving L.A. two teams instead of just one, or committing to hosting multiple Super Bowls here. And even if taxpayers escape paying for a football stadium now, a team, once here, would almost certainly come back for handouts in the future. Ask yourself: Do you trust the L.A. political and business leaders who just lined up behind a $1.6 billion tax giveaway to Hollywood to stick to a hard line against public support for a pro football team? Me neither.

It would be nice if the NFL, which has prospered during its 20 years without a team in L.A., would decide to stick to the status quo. The league has done well, after all, by dangling the possibility of a team returning here without ever sending one. Many new stadiums across the country have been built for NFL owners who’ve glanced longingly toward L.A.

But the big tease might be hard to pull off indefinitely, and the NFL seems genuinely interested in occupying the nation’s second-largest city. So, my fellow Angelenos, our only hope for keeping out the NFL may be to sweeten the incentives to stay away, by offering the league what it craves most: cash. It’s a distasteful thing to do, I know, but when you think of all the costs of having a team–stadium costs now in and in the future, additional traffic, the dollars that football would divert away from other entertainment options, and all the time and public attention wasted on the NFL drama–paying off the NFL becomes a bargain.

Together, the county and city should make an offer the league can’t refuse: $100 million in exchange for a guarantee never to put a team here. And what if the league turns it down, you ask? That, at the very least, would make the reality undeniable: The NFL wants to take L.A. for all it’s worth.