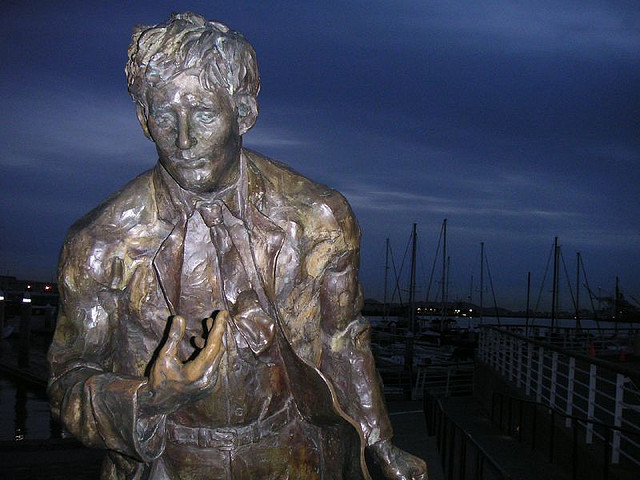 Let’s say your New Year’s resolution is to be not just a better Californian, but a truly great one. You seek to be a secular California saint, so revered that people put your name on parks and squares and schools. What should be your path?

As it happens, three of the best books I read last year were biographies of such secular California saints—the bestselling socialist adventurer-writer Jack London (1876-1916); the championship-winning UCLA basketball coach John Wooden (1910-2010); and the farmworker organizer Cesar Chavez (1927-1993), whose birthday is a California holiday.

Taken together, these very different biographies (Jack London—An American Life by Earle Labor; Wooden: A Coach’s Life by Seth Davis; and The Crusades of Cesar Chavez by Miriam Pawel) make a clear case for how you achieve serious acclaim in California. The first rule: In this state, sainthood is not for the saintly.

“Nice guys throughout the ages have done very little for humanity,” Chavez once told volunteers.

London, the writer, was a serious alcoholic who drank himself to death at 40. Wooden never let his high principles get in the way of winning, looking the other way as a real estate developer gave his players perks that violated NCAA rules. And Chavez repaid the loyalty of people in the farmworker movement with paranoid purges, false accusations, and forced participation in a bizarre encounter-group game Chavez learned from a cult.

“Nice guys throughout the ages have done very little for humanity,” Chavez once told volunteers, as quoted in Pawel’s book. “It isn’t the nice guy who gets things done. It’s the hardheaded guy.”

It’s not that the flaws of such men didn’t matter. It’s that their flaws were closely connected to their successes. The relentlessness that allowed these men to succeed also made it easy for them to confuse fact and fiction. London sold the world an image of himself as a picture of rigor and health, even though he was quite sickly. (“Do I endeavor to unconvince them?” London wrote, according to Labor. “It’s so much easier to leave their convictions alone.”)

Chavez created his own mythology around his movement; among the myths was that he had launched the United Farm Workers on his own birthday, which became an official union holiday. And as Davis writes of Wooden’s many apocryphal stories about his own sportsmanship: “Like so many great narratives, the accepted version, the one Wooden himself told, often diverged from fact, as the myth overtook the man.”

The myths about all three men proved easier to digest than the complexity of real California saints. Labor quotes London’s wife pitying biographers: “An attempt to set down his kaleidoscopic personality can result only in seeming paradox. He is so many, infinitely many, things.” Pawel quotes from a letter from one Chavez aide to another: “Cesar is just too complex. The little bastard is a genius but a destructive one.”

If you want to be a California saint, prolific winning—a philosophy even Charlie Sheen could understand—can mask your sins. John Wooden won 10 national basketball championships in 12 years. The reach, number, and acclaim of London’s books will be difficult for any one author ever to surpass. Chavez’s victories for workers are still important models for today’s organizers, and the landmark California agricultural labor law he championed remains on the books.

All three men also benefited from early success that attracted disciples (other writers for London, organizers for Chavez, better players for Wooden) who could promote their successes. London was a prize-winning author by the age of 17. Wooden was an All-American player at Purdue. Chavez was identified at a young age, after successful work in San Jose and Oxnard, as a genius at empowering poor people.

These early victories seemed all the more impressive because they were achieved by men of humble origins. London spent his boyhood delivering papers, hauling ice, setting up bowling alley pins, and working in a factory. Wooden’s father lost his farm to foreclosure, and Wooden’s older sister died before her fourth birthday. Chavez grew up in a farmworker family and dropped out of school after eighth grade. Did these backgrounds fuel all three men? Each worked so obsessively hard that he suffered serious health effects as a result.

All three men had national reputations, but they all stuck around California, building bases here that protected them from fame-seekers. London had a ranch in Sonoma County that is now Jack London State Park. Chavez, whose biggest failure was his inability to turn his movement into a functioning labor union, remade a tuberculosis hospital in the Tehachapi foothills into a compound. Both men became more and more isolated later in their lives. With Wooden, who lived in an Encino condo, the story is different; he was isolated from his players as a coach—but connected deeply with them during his long retirement.

But work and achievement aren’t enough in themselves to earn California sainthood. Each man became iconic because he represented a powerful idea that challenged the prevailing winds. London came to embody both the sense of adventure and wilderness of his books—and a socialist protest against an industrial society that ground down men and nature. Chavez was the epitome of the David versus Goliath struggle of workers for rights and respect. Wooden, whose greatest successes came in the ’60s and ’70s, was a conservative counter-example of squeaky-clean Midwestern teamwork in a time of drug-fueled individualism.

This hard fact—that sainthood requires ideology—deserves more attention today, when the most powerful among us argue that true greatness comes from rising above ideology and instead embracing data-driven pragmatism. This mistaken realism may be one reason why California isn’t making new saints these days.

Of course, being misunderstood is key to sainthood. Wooden was viewed as a cool character, even though he could be fiery (and vicious to referees). London’s womanizing and outrageous behavior were greatly exaggerated, reports his biographer Labor, who adds, “No American writer has been subjected to more misleading commentaries.” Today, Chavez is portrayed as an inspiration to immigrants—even though he wasn’t an immigrant, and his attitudes were often less than friendly to immigrants.

Did any one of these men even believe in saints? Does it matter? London, an atheist, wrote: “I believe that when I am dead, I am dead. I believe that with my death I am just as much obliterated as the last mosquito you and I squashed.” I suspect that wherever he is now, Saint Jack—and Saint John and Saint Cesar—know better.