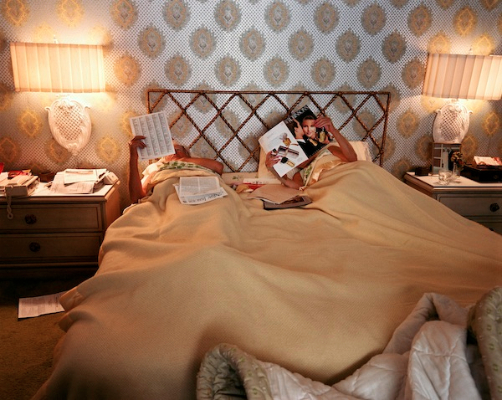 Reading in Bed from the series “Pictures From Home” 1988 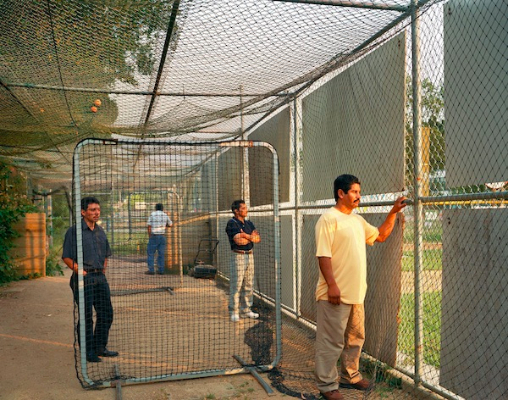 Batting Cage, 2007 from the series “Homeland” 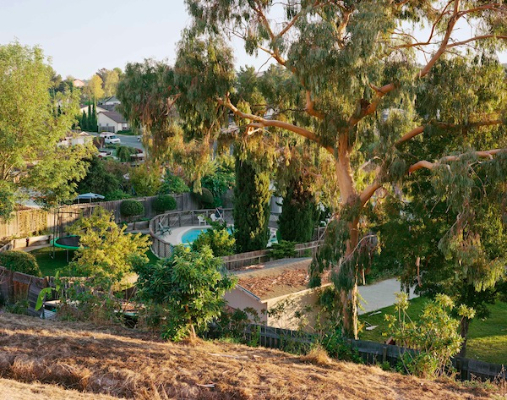 Backyard Hercules from the series “Homeland” 2009 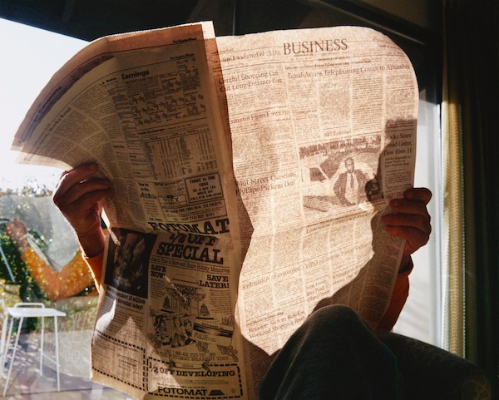 Business Page from the series “Pictures From Home” 1985 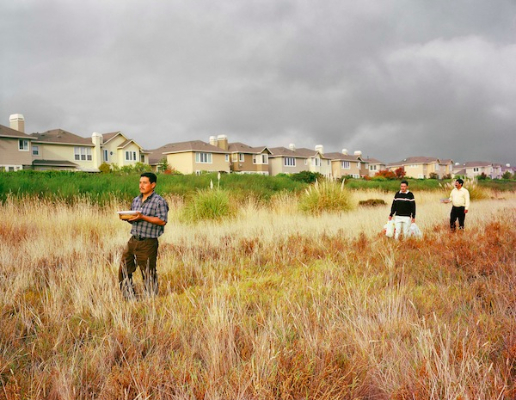 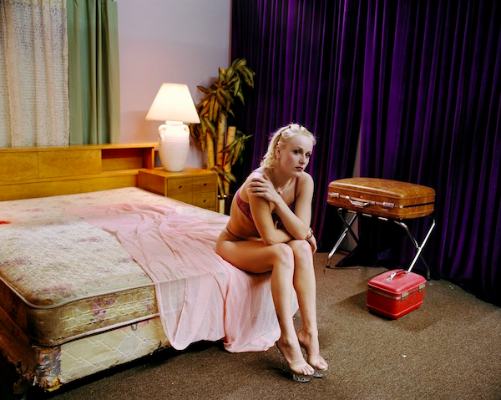 Sharon Wild from the series “The Valley” 2001 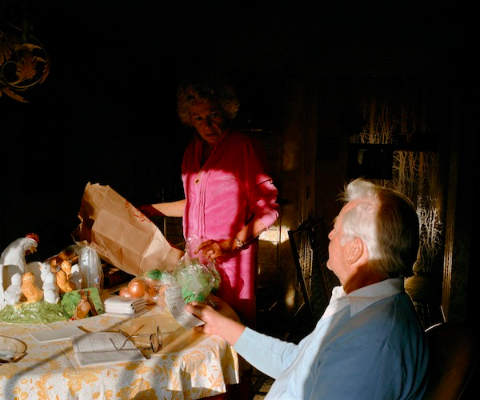 Discussion, Kitchen Table from the series “Pictures From Home” 1985 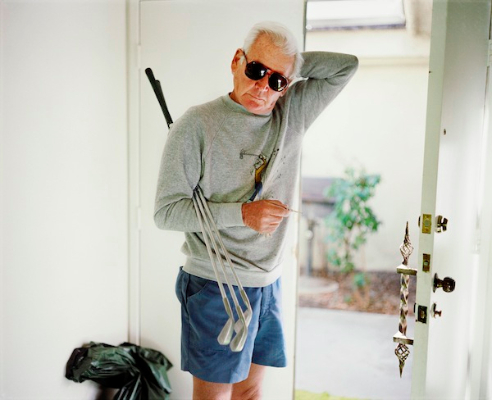 Dad With Golf Clubs from the series “Pictures From Home” 1987 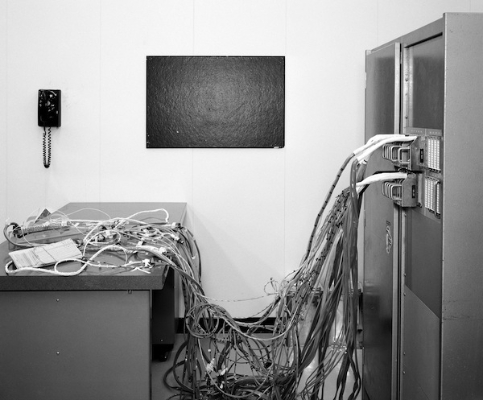 Untitled by Larry Sultan and Mike Mandel from the series “Evidence” 1977, printed 2013 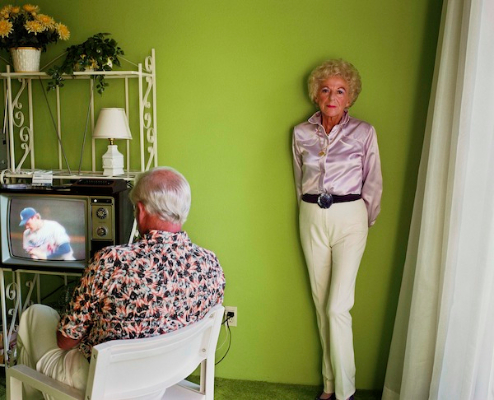 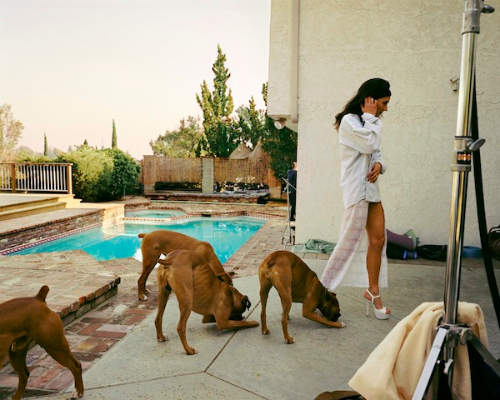 Boxers, Mission Hills from the series “The Valley” 1999

Photographer Larry Sultan grew up in Los Angeles’ quintessentially suburban San Fernando Valley, surrounded by tract homes and strip malls. What might appear bland to others, though, was transformed through his eye into a rich mine of domestic drama. His photos offer a chance to look beyond the cookie-cutter backdrop to the eccentric details of the subject’s particular life.

“I never tire of his images,” said Rebecca Morse, who curated Sultan’s first retrospective, now on display at the Los Angeles County Museum of Art. “Some details are of the world as it stands and some are purposeful and adjusted by him. The combination of those two things creates an interesting tension. You’re rewarded by additional viewings.”

For instance, there’s “My Mother Posing for Me,” from a series published in 1984. The main focus of the photograph is nominally the woman standing stiffly in a lavender satin blouse and white polyester pants. But Sultan didn’t just frame his mother in the shot—his father is sitting in the room, too, just to the left. His father, however, is ignoring the photo shoot and doing his own thing—watching the Dodgers on TV.

There’s an element of voyeurism in Sultan’s photographs—they give you the feeling of gaining access to sights you’re not usually allowed to observe. His “Swimmers” series (taken in San Francisco) invites you to stare at people’s bodies under the pool’s surface as they learn how to swim. “The Valley” series takes you on the sets of pornographic movies, where Sultan snapped shots of an empty, dirty-looking mattress or a high-heeled woman in a cover-up, smoothing her hair between shots.

Sultan often achieved the intimacy of his work by spending a lot of time with his subjects, Morse said. The pictures he liked best of his parents, for instance, typically came at the end of a weekend spent hanging out with them. Sultan seemed to want to get his subjects to the point of practically forgetting that he was there.

The level of comfort between Sultan and his subjects is evident in Morse’s favorite photograph, “Reading in Bed.” Sultan’s mother isn’t looking at the camera here, and has her nose buried in a magazine. His dad has strewn papers haphazardly on the bed and floor. They’ve kicked the comforter down to a twisted heap at the foot of the bed. You get the sense that you’re not disturbing the two of them as you check out the trinkets on their side tables, the rococo sconces, and that fabulous paisley wallpaper.