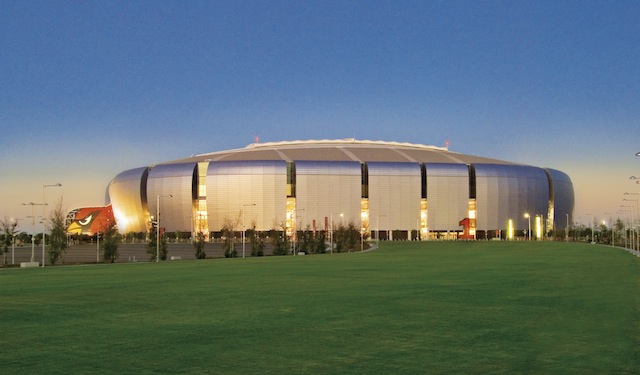 My family and I moved to Glendale, Arizona–where the Super Bowl will be played next week–in 1968, when it was one of many small Arizona towns ringing Phoenix.

Why Glendale? Serendipity. My relatives were realtors and found a house in Glendale that met our specifications. Glendale was a small, comfortable town. Our children, all under 10 years of age, walked a quarter mile to school. They played in the municipal park and swam in the municipal pool. There was little traffic, and getting to work or shopping in Phoenix took 10 minutes, tops. What is today the upscale area of Arrowhead was then a desert where we took the kids to ride motorbikes and to shoot BB guns. On a spring evening, the air was heavy with the scent of citrus blossoms from local groves.

Glendale has bet its future on making itself into a playground for professional sports.

Fans who attend the Super Bowl will encounter an entirely different city, a place that, as much as any other American municipality, has bet its future on making itself into a playground for professional sports. If some locals look less than happy about the plan, know that it’s the risks involved in that gamble, not the traffic, that’s bothering us.

Glendale has undergone dramatic change. At its incorporation in 1912, it was a Russian-Asian-Hispanic farming community. In the 1960s, when my family moved here, Glendale was a small city with a population of 45,000 covering just 12 of its present 52 square miles. Then, in the 1990s, new subdivisions, including Arrowhead, and new shopping, including Arrowhead Mall, grew up. Downtown reinvented itself as an antique mecca. With my children graduated from college and scattered to build their own families, Glendale adopted a district system of political representation rather than the at-large system that perpetually placed the “good ole boys” from downtown in positions of power. At the urging of friends, I ran for the city council and won a seat, serving from 1992 to 1996.

But Glendale wanted more than to be just another Phoenix suburb with the same chain stores. We were determined to carve our own distinct, national identity. In the early 2000s, as I returned to the council, our attention turned to the possibilities of sports as a catalyst. A strategy took shape: if we built major sports venues, the resulting tourism and sales tax dollars would strengthen city coffers and allow us to make major improvements in the quality of life of our residents. Build it and they will come, so to speak – especially sports fans and tourists.

First, a city-owned venue for professional hockey and for entertainment, the Gila River Arena (formerly known as Jobing.com Arena), and a complementary retail complex, Westgate, were built in partnership with developer Steve Ellman. Then, via another partnership with the Arizona Sports and Tourism Authority, we created two more sports facilities: the county-owned University of Phoenix football stadium (home to the NFL’s Arizona Cardinals) and a city-owned spring training baseball facility called Camelback Ranch (home-away-from-home to the Los Angeles Dodgers and the Chicago White Sox). The football stadium put Glendale in the Super Bowl business for the first time; promised windfalls from hosting the big game were supposed to afford us the option of paying off construction debt related to the hockey arena and the baseball facility sooner.

Glendale became the NFL Arizona Cardinals’ home field. At the time of approval of the three new Glendale sports venues, our economy was robust. We saw no hint of the dramatic national recession to come. We learned to manage the crowds of people who descended upon our community for games; the effect is felt only by those who live in close proximity to the stadium, as I do. I cope by not shopping or driving near the stadium on game days, and the city, at my insistence, discouraged fan parking in adjacent neighborhoods. And 350 days a year, when there is no football, Glendale remains very much itself.

The bigger downside proved to be financial. It wasn’t long before optimistic staff projections of increased sales tax receipts and new economic development proved to be wrong. Then came the national recession. As we hosted our first Super Bowl in 2008 – next week’s will be our second–Glendale was in trouble. Nevertheless, expectations were high–a major selling point for building these sports facilities had been that the international publicity of a big Super Bowl game would put Glendale on the map, accelerating business relocations to our city and bringing new development. Those expectations weren’t met. To this day not one company has relocated to Glendale as a direct result of the Super Bowl. New retail development has located as close as possible to our freeway, not the stadium.

Pulling off that Super Bowl in 2008 was an all-hands on deck effort, with all city departments involved in the planning, preparation, and execution of Glendale’s moment in the spotlight. The city spent $3.4 million on the event and recouped a little over $1.2 million in sales tax and fees.

The resulting $2.2 million loss, combined with a national recession, was just one sign that our sports strategy was unsustainable. Debt related to the two sports venues that Glendale itself owned–the hockey arena and the ballpark–had once seemed manageable but soon proved to be a financial albatross. Glendale was bleeding. The regular season football games proved to be a wash financially. While sales tax revenues from Westgate are greater on game days the additional revenue is consumed by increased public safety and transportation costs to manage traffic and safety issues.

Other Super Bowl host cities, Miami Gardens in Florida and the Arlington area in Texas, have mechanisms for state reimbursement of their hosting costs, but we don’t. In recent years, Glendale’s mayor has concluded it doesn’t seem prudent to be in the Super Bowl hosting business if there is no way to recover its costs.

So why is the Super Bowl in Glendale again? The Super Bowl bid process is a long one, and locations are approved many years before the actual event. Tremendous political pressure was placed on the city from the Bidwill family, owners of the Arizona Cardinals, as well as other stakeholders, swaying a majority of the council to approve the bid in 2011. I was not in the majority. Glendale held out hope for a bill introduced in the Arizona state legislature in 2014 that promised to reimburse the city for its $2 million in game-related public safety costs. We got the Super Bowl but not the legislation. Glendale expects to reintroduce the bill this year in hopes of a different outcome.

There are some good things about the Super Bowl. Even though Glendale loses money, the state, the county and the Phoenix Metropolitan area will share in the injection into the economy of a projected $500 million dollars. Direct TV is hosting a major music festival in Glendale across the street from the stadium. The city has scheduled one of its premier events, the Chocolate Affaire, the weekend of the Super Bowl. The confluence of chocolate lovers and football fans will generate revenue for Glendale’s merchants and restaurants.

Costs to host this year’s Super Bowl have gone up since 2008. The city’s loss for this game is sure to be greater than the $2.2 million dollars loss the first time. Despite some additional development during the economic recovery, there are still not enough amenities surrounding the stadium to generate the sales tax needed to cover the hosting costs.

We love Glendale and so will this year’s Super Bowl visitors. Even as our population has grown to nearly 250,000 (we’re the nation’s 87th largest city and Arizona’s fifth largest), the city still retains a hometown feel. My family isn’t going anywhere–we are “nesters” and once we plant ourselves we stay planted. I invested 16 years as a councilmember helping to shape Glendale’s present and future. I choose not to walk away from my investment. So we’ve scrubbed our faces, slicked back our hair and picked up the living room. We are ready to welcome you to our home.

But the lack of financial relief has led many of us to believe that this should be Glendale’s last Super Bowl.