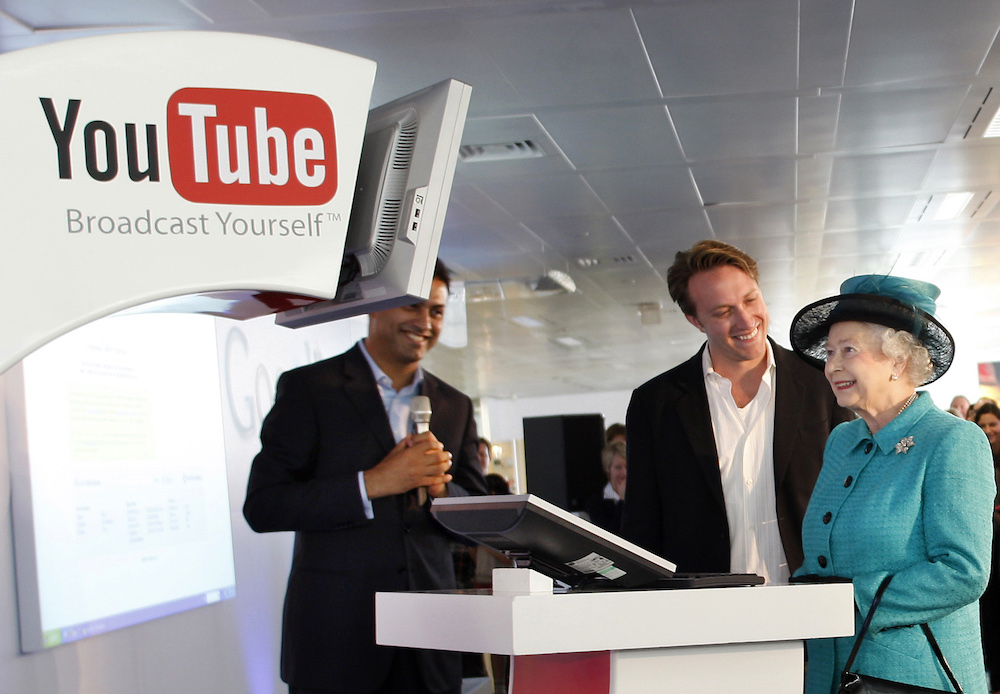 Britain's Queen Elizabeth II uses a computer to upload a video to the Royal Channel on You Tube video alongside co-founder of You Tube Chad Hurley, centre , and President of Google Europe, Middle East and Africa Nikesh Arora , during a visit to the company British headquarters in London Thursday Oct. 16, 2008. (AP Photo/Adrian Dennis, Pool)

This is true even in the capital of the old empire. When I visited London last week, the newspapers were full of stories about the United Kingdom pulling the plug on its global ambitions and voting to leave the European Union in a June referendum. But what caught my eye as I walked and took public transportation around London were the garrisons of the Golden State.

“London Has Fallen,” a dumb new Hollywood thriller, might as well have been the city’s new slogan, given the ubiquity of its advertising. Within blocks of where I was staying, I encountered two different Hollywood production studios and testing space for films and TV that would play overseas. And on the telly, our TV shows—“The Muppets,” “Last Man on Earth,” “American Horror Story”—were everywhere. Adrian Woolridge, an editor at The Economist who used to live in California, lamented at a Zócalo event that it’s no longer true that the British are funnier and make better TV than we do. “All the best television—you know, Breaking Bad—it all comes from the United States,” he said.

When I wanted a bite, I stopped at Tortilla, which served me “real California burritos” as I scrolled through my iPhone. And for most of one day, I wandered around Tech City, a cluster of technology companies in Central and East London, which also is touted as “Silicon Roundabout” in a nod to Silicon Valley.

British Airways had blanketed Underground stations with ads for its new direct flights to San Jose. I talked with people at six different technology firms; all seemed focused not on building a transformational company but on selling their start-ups to some tech giant back in California. (And in those conversations about high-tech mercantilism, I realized that Silicon Valley jargon is the exception to the rule that everything sounds better when spoken with an English accent.)

Then an old friend took me around the perimeter of the property near King’s Cross where Google has planned to build its giant new U.K. headquarters. He also filled me in on the drama involving proud British architects prostrating themselves before the men from Mountain View to earn this commission.

The building of such a bold public monument to United Googledom would be a reminder that the California Empire is something different than the timid American Empire, which the British historian Niall Ferguson described in his book Empire as “an empire in denial” because it “lacks the drive to export its capital, its people and its culture to those backward regions which need them most urgently and which, if they are neglected, will breed the greatest threats to its security.”

The California Empire is thus more like the British one, unapologetic in its conviction that it represents a better way of thinking. And the cult of California technical “disruption” bespeaks a confidence that we can do whatever your work is better than you, no matter how long or expertly you might have been doing it.

Hollywood has prospered by making big, nasty pictures designed to obliterate the senses of people around the world. California companies and people are busy colonizing the world with inventions and reinventions in social media, food, bioscience, and energy. While the American government is withdrawing from space travel, Hawthorne-based Space X is leading a renewed global push for cheaper space exploration.

One could argue that California-based tech executives have assumed some of the “leader of the free world” space once occupied in Washington. While the lame-duck Illinois president leads from behind, Golden State CEOs—most notably Apple’s Tim Cook—practice foreign diplomacy and wage cyber-war against everyone from American intelligence agencies to European regulators to censors and hackers in the employ of the Peoples Liberation Army. Heck, Steve Jobs, even from the grave, has more juice than any American elected official, and just last year got the worshipful if weird biopic genuflection from a group of British film worthies that included Kate Winslet, Michael Fassbender, and Danny Boyle.

Just as 19th-century British Prime Minister Benjamin Disraeli launched imperialist expansion to seize new markets and grab raw materials, Mark Zuckerberg and Larry Page set up shop around the world to command tech markets in every country possible, and to harvest today’s essential materials: the brains of the young and educated.

This is not the empire of governance that the U.K. maintained; California will never amass all the colonies and protectorates and mandates and territories that the British military and civil servants once made their own. But the reach of the Californians is far greater. At its height, the British Empire held sway over only one-fifth of the world’s people, while California firms have convinced the world to carry phones that allows us to track the movements, choices, and behaviors of more than one-half of the planet’s population. California’s virtual empire controls the hearts and minds of more people than any previous empire in history.

California is a worthy successor to imperial Britain in other ways. California’s empire, like the British one, builds on previous empires (ours the American one, while the Brits followed Portugal and Spain of the 15th and 16th centuries). The British ruled by the seas; we rule through underwater cables. Britain’s rise was accelerated by the industrial revolution; California’s empire is fueled by digital revolution. As the British before them, our imperialists say they are making not merely profits but making the world a better and more peaceful place. Call it the Pax California.

Both empires have been delivered big blows by Washington. In the British case, it was George Washington, and the revolution he led, that robbed Britain of a crucial piece of the empire. In California, it is Washington, D.C.—and its gridlock on energy and immigration policies, not to mention the intrusive hacking of its intelligence agencies—that have slowed the state’s progress and threaten the credibility of Silicon Valley around the world. European continentals whose ancestors once slowed the British via warfare now fight the California empire with European courts and commissions and anti-trust regulations.

The California empire, like when Elizabeth I authorized British raids against Spanish ports and shipping, is not above hacking and piracy in the service of power and economic growth. And the California empire is finding it difficult to relate to the former jewel of the older empire: India. Recently, the Silicon Valley investor Marc Andreessen, angry at a decision by India’s telecommunications regulatory board that went against Facebook, started a firestorm by tweeting that India was better off as a colony. (To his credit, he apologized more quickly than the British did.)

Just as their British forebears did, California’s imperial set, for all their hard work and passion, make a great show of their commitment to their hobbies (George Orwell wrote that his was a nation of flower-lovers, stamp-collectors, amateur carpenters, and many other things). Zuckerberg has made an annual tradition of taking on new outside projects, such as learning Mandarin, as successful would-be colonizers do.

There are many books offering many reasons why the British lost their empire: arrogance, overreach, too many wars, financial mismanagement, and doubts back home in the U.K. about the wisdom and justice of possessing colonies. It remains to be seen if California’s empire can learn from those mistakes, or whether its days too are numbered, on account of its hubris.