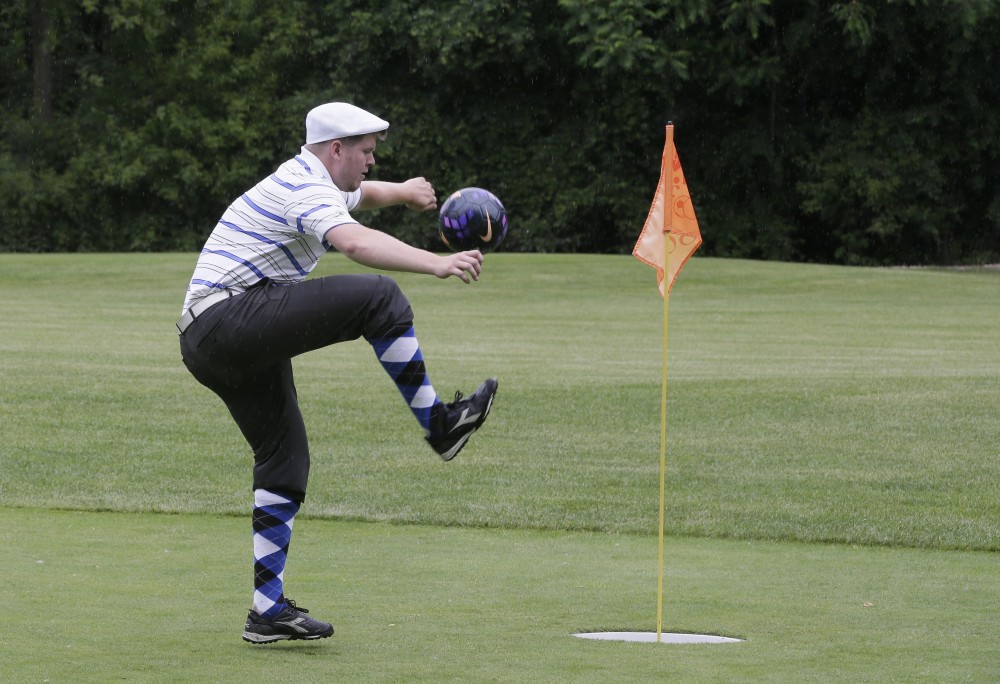 Your columnist is not an Olympic athlete. But last Friday I managed a serious athletic feat: playing 18 holes of golf in just 45 minutes, without using a cart or even lifting a golf club. And, no, this wasn’t miniature golf or a video game.

My secret? I was playing FootGolf, which involves kicking a soccer ball into extra-large holes placed on regulation golf courses. This new sport, spreading fast in California, is one of the more promising answers to a full-blown statewide challenge: what to do about our glut of golf courses?

In California, golf is not a matter of fun and games. For more than a century, the sport has helped define our state’s landscape, its tourism economy, its leisure culture, its real estate market, and the finances of hundreds of California cities with municipal courses. Today, golf is still a $13 billion California industry—that’s 10 times bigger than the legal side of a more talked-about (and also grass-oriented) business, cannabis.

But golf has had a very bad decade, with the number of golfers declining by nearly 20 percent nationally (with similar declines in California and other golf-saturated parts of Europe and Asia). The number of golf courses, after increasing for 60 consecutive years, from 1946 through 2005, is also dropping, with golf clubs and municipal courses shutting their doors.

This decline is posing new questions because California’s growth and land use have been so tied to golf. The game was a big part of the leisure culture that Californians created as a challenge to America’s tired Puritan ethic and as a lure for millions of people to relocate here in the 20th century. As the California booster Charles Fletcher Lummis wrote, “We are destined to show an astonished world the spectacle of Americans having a good time.”

Large regions of the state—notably the Coachella Valley and Monterey Bay—fashioned themselves as leisure destinations, and created some of the world’s greatest golf courses. After the Second World War, golf courses were used to promote new housing developments around the state. In the 1950s, the Thunderbird Country Club in Rancho Mirage, one early such developments, allowed Ford to use its name on a new car model, which in turn inspired a classic Beach Boys song about a fun-loving girl driving her daddy’s automobile. Does it get any more Californian than that?

While playing golf feels like an individual pursuit, this growth in the game was heavily subsidized, through tax laws that fueled development and by local governments that saw public golf courses as an essential amenity, like parks and playgrounds. That investment seemed like a good one in the 1990s when an Orange County kid raised on municipal courses—Tiger Woods of Cypress—became one of the world’s most popular athletes, inspiring a younger, more diverse generation to take up the game.

But then came 2006, and California’s housing crisis crashed the global economy. Just like that, the whole world turned hard against California golf. The middle class that sustained so many golf courses suddenly didn’t have the money or the jobs or the time to take up such an extravagant pastime. Successful golf course owners—like Donald Trump, who owns a club open to the public in Palos Verdes—catered to the wealthy (Trump charges as much as $280 a round), the only people gaining in the current economic recovery.

Today, golf is still a $13 billion California industry—that’s 10 times bigger than the legal side of a more talked-about (and also grass-oriented) business, cannabis.

Golf is now a social face-to-face pasttime in a world that prefers digital communication, a slow game based on courtesy in a fast-paced society that has forgotten its manners, and a Republican-leaning game at a time when the Republican party is cracking up. Trends in fitness also work against golf, with many Californians seeking less relaxing exercise, and slimmer, more muscular bodies than you find on golf courses.

“The thin athletic body now represents leisure and privilege in the way that a plump well-fed body represented leisure and privilege,” says Utah State historian Lawrence Culver, author of Frontier of Leisure: Southern California and The Shaping of Modern America. Today, he adds, “there are arguments for having golf courses, but not in the number we now have them. It’s an expensive and expansive form of outdoor recreation.”

With fewer customers playing fewer rounds—and higher water bills during the drought—golf courses across the state have struggled. A few dozen have closed, and dozens more could shut down.

But replacing a golf course is a quandary. Some struggling courses are close to industrial sites or airports, and remain useful as buffers. It would make sense to turn golf courses into desperately needed housing, or into public parks in the many California communities that lack such spaces. But California rarely makes sense. And regulations and politics make such conversions difficult and expensive.

In the meantime, golf course operators are doing everything they can to find new uses for their courses. Around the state, you’ll see everything from concerts to film shoots to car and dog shows on golf courses. Some courses have hosted events for young singles, often on Friday or Saturday nights, that combine hitting golf balls with video games, shows of golf technology, and drinking.

One of the better innovations is FootGolf, which is being popularized by Roberto and Laura Balestrini of the Palm Springs-based American FootGolf League. More than 150 golf courses nationwide added FootGolf last year, and I tried it out one morning at an 18-hole par three golf course in Arcadia, in the San Gabriel Valley.

The course had added separate tees and small greens, with 21-inch-wide holes, off to the sides of its usual golf greens. At the pro shop, I handed over a $15 green fee to a young course employee named Jordan Godfrey, who happens to be America’s national FootGolf champion. He carefully explained the rules—kicking a size-5 soccer ball in as few kicks as possible from the tees into the big holes—and warned me not to damage the well-manicured regular golf greens by kicking off of them.

I had a great time. Without a bag of golf clubs to carry, I jogged around the course in 45 minutes. The three real golfers on the course greeted me warmly and let me play through. And I narrowly avoided falling into the giant holes when fishing my ball out of them.

My only mishap came on the damp fifth tee, when I fell as I kicked the ball 50 yards down the fairway, landing hard on my bottom. That’s never happened to me playing regular golf. But no great California transformation is without its risks.