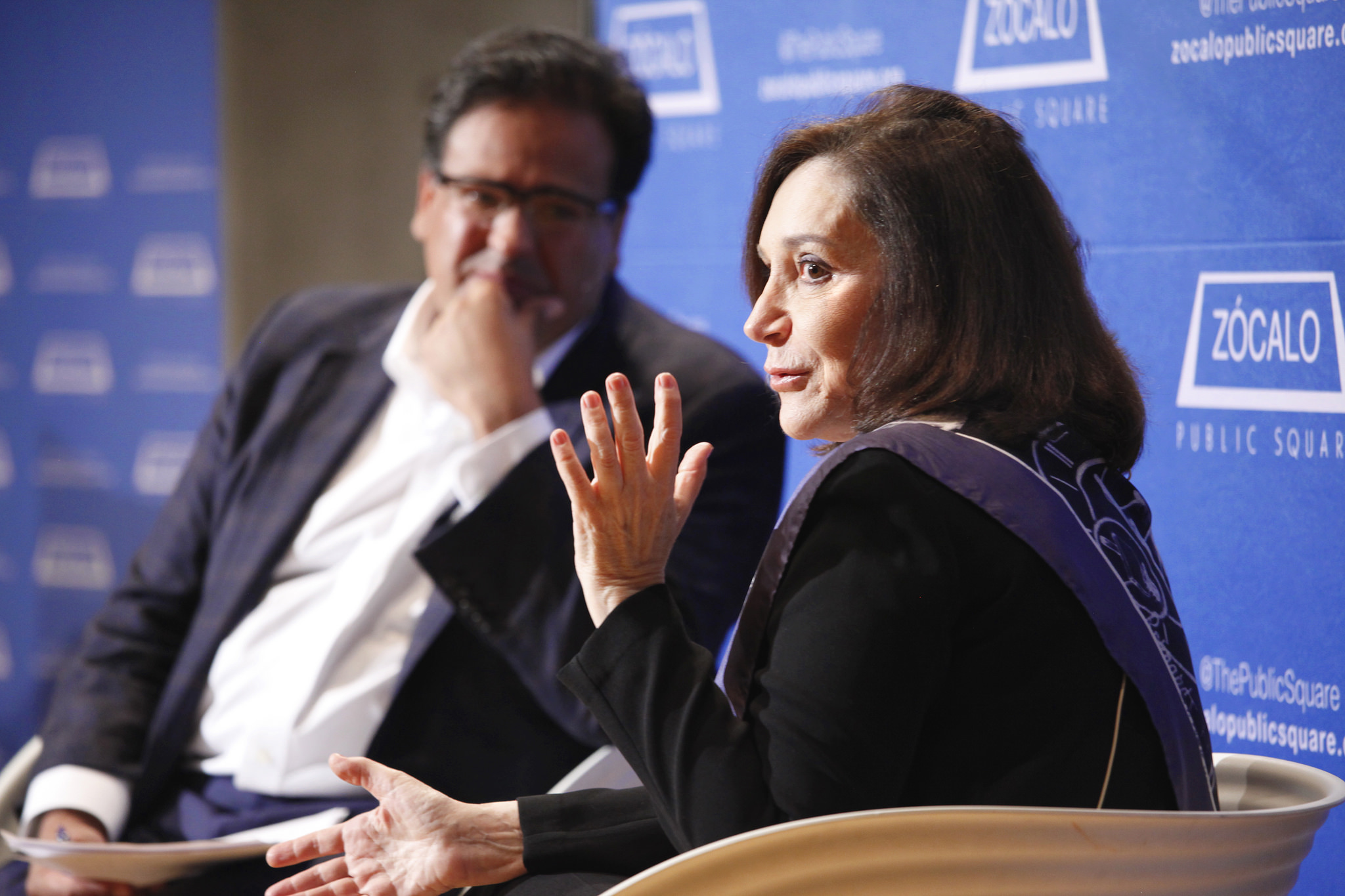 Zócalo Publisher Gregory Rodriguez said he was terrified as he opened a discussion onstage at MOCA Grand Avenue with MIT’s Sherry Turkle.

It wasn’t, however, because he was moderating in front of a full house, or because Turkle is an esteemed sociologist and psychologist who was there to accept the sixth annual Zócalo Book Prize for Reclaiming Conversation: The Power of Talk in a Digital Age. It was because Turkle’s book argues “that our fixation on technology is making us less empathetic,” and that an “empathy gap” has opened up between human beings as a result of our obsession with being digitally connected.

Turkle didn’t disagree that our decreased capacity for empathy can be scary. Studies have shown, she said, that even having a silenced, turned-off phone on a table between two people “disconnects us, because it reminds us symbolically of all the other places we can be.” Researchers have found a 40 percent decline in empathy in college students over the past 30 years, with the majority of the change taking place in the past 10 years.

So why, asked Rodriguez, is Reclaiming Conversation ultimately optimistic about our chances of overcoming the empathy gap? After all, he himself missed having his phone on, even while speaking onstage.

“I think people sense that we’re in trouble, and they’re not happy with where they are,” said Turkle, citing a recent Pew study showing that 89 percent of Americans said they took their phone out during their last social interaction—and 82 percent said that doing so somehow diminished the interaction. “I think we’re in a moment of inflection,” she said, “a kind of tipping point” in which we can change our behavior and seize control back from technology.

Turkle recalled interviewing a father of 11-year-old and 2-year-old girls. The conversations he had with his older daughter in the bathtub when she was a toddler formed the basis of their relationship. Today, he checks his email while he bathes his 2-year-old. “We love our phones; we’re going to live with them,” said Turkle. “But we’re going to live with them better in ways that are better for us and better for our children.”

“What compels the father to take out his iPhone in that moment?” asked Rodriguez.

Turkle said that phones, like benevolent genies, offer us three gifts: We will always be heard. We can put our attention wherever it wants to be. And we will never be bored. But just like fairy tale genies, phones bestow curses along with the gifts.

“Constant stimulation is not good for you,” she said, adding that boredom is necessary for us to be creative, to learn how to listen to others, and to achieve a stable sense of self.

Our sense of who we are is also plagued by being constantly connected. Thanks to social media, “we know in excruciating detail what other people are doing,” said Turkle. But it’s “a glamorized version of what they’re doing.” Turkle said she herself might post on Facebook that she’s in Los Angeles to accept an award. But what she won’t post is a photo of her dressed “in a sweatsuit, coming off the plane from Boston to L.A. looking like a bag lady.” As a result of these glamorous social media lives, we become jealous of other people, and even of ourselves. It’s alienating, said Turkle.

Rodriguez asked about Turkle’s notion “that we have edited lives, that we’re always performing.”

The trouble, Turkle replied, is that when we rely wholly on performance to connect with others, we “shy away or find ways around a certain kind of conversation.” We don’t go off on tangents, make spontaneous jokes, or free-associate.

Young people today, she said, fear real-time, unperformed, unedited conversation. The college students she studied “get together and write romantic texts in groups” to make the messages perfect.

But, Turkle argued, it is showing weakness and vulnerability that helps us be more empathetic. “The experience of empathy basically comes in situations where you get to see someone thinking, and you get to be able to learn how to project yourself in the mind of the other,” she said. Turkle added that, in her book, her ideas are at their most polished—but seeing her talk about them in person offers a different window into her way of thinking.

“I’m engaging with human beings, because that’s who we are,” said Turkle.

If we go back a half century or so, asked Rodriguez, were we more centered, more connected, because we were less distracted by technology?

“I don’t want to paint a golden era,” said Turkle. There are plenty of people who never liked being alone, or whose families didn’t have deep conversations well before the onset of these technologies. But “what’s going on now is undermining our ability” to empathize, she said. “Visibly around us, we’re seeing our children not developing that capacity. I don’t want to say it used to be perfect. Let’s just get a grip on how we’re behaving ourselves and with our kids.”

Turkle took questions from the audience that ranged from asking about parallels between the digital divide and road rage (which she likened to cyber bullying) to her inspiration for Reclaiming Conversation (it arose from her previous book, Alone Together).

One audience member asked Turkle about how to make digital life less overwhelming. Trader Joe’s, the audience member noted, originally became successful because the store didn’t offer a ton of choice—it carried just one kind of black beans. “How do you make a Trader Joe’s experience for people so they don’t feel overwhelmed with all of the possibilities?”

Turkle thinks that a consumer movement could grow out of our dissatisfaction with all our choices, one that’s similar to the way our eating habits have changed over the past half-century.

Growing up in post-World War II Brooklyn, Turkle ate fruit and vegetables from cans. “We didn’t have anything fresh,” she said. But she fed her own daughter a different diet, with fresher foods. That shift, she said, didn’t come from the food industry. “It was a hard-won fight,” said Turkle, about obesity, diabetes, and our health. We need to ask designers of technology to create phones that don’t try to keep us glued by our screens but that let us do what we want to do, then turn away. That would include phones that don’t let us text while we’re driving.

“These are simple things we can ask for,” she said. 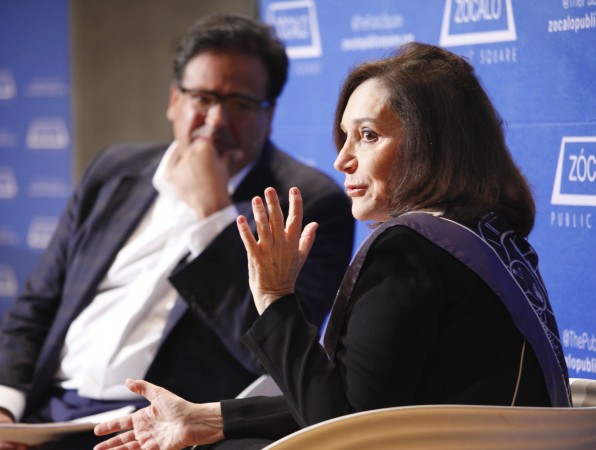 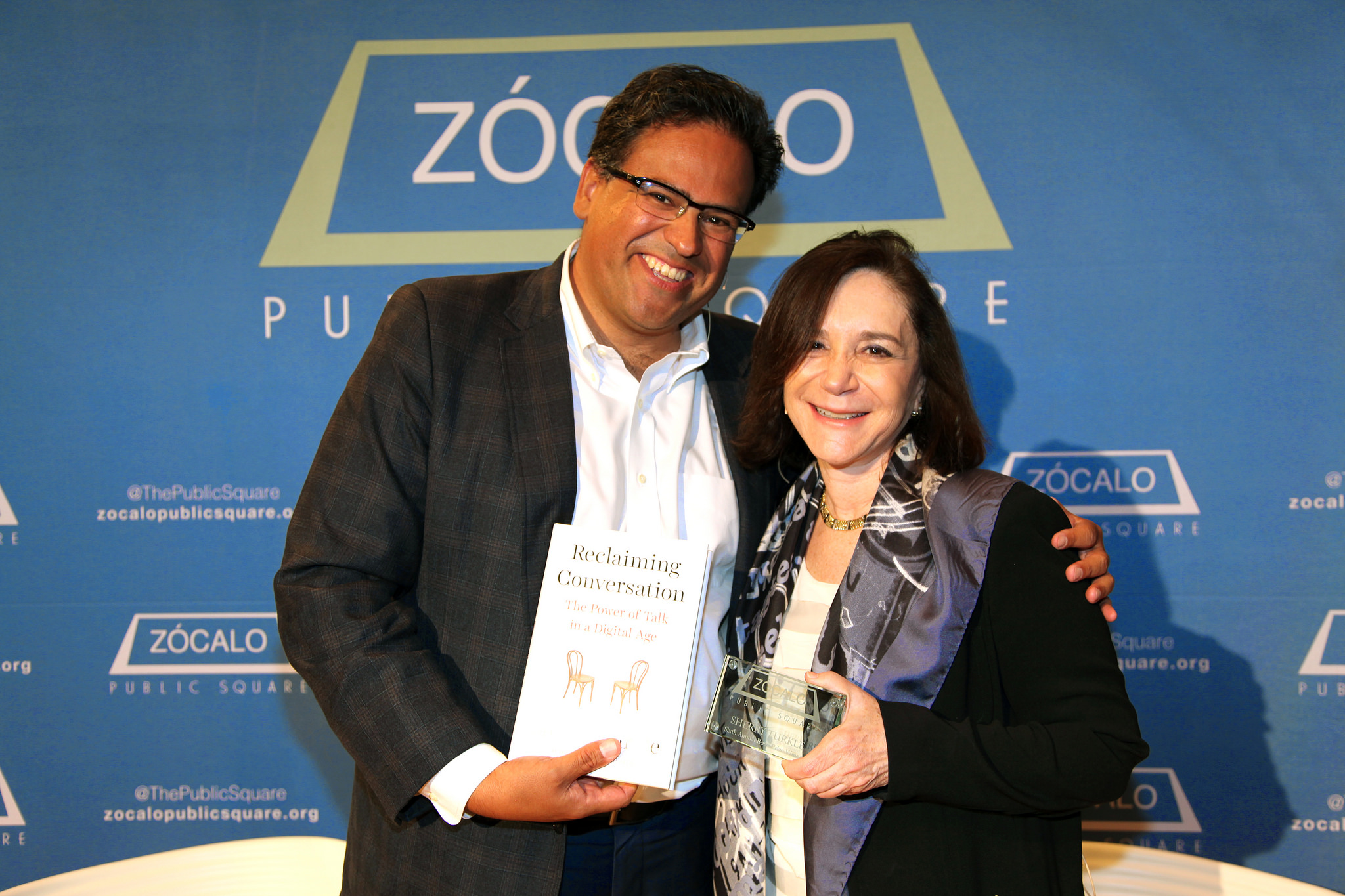 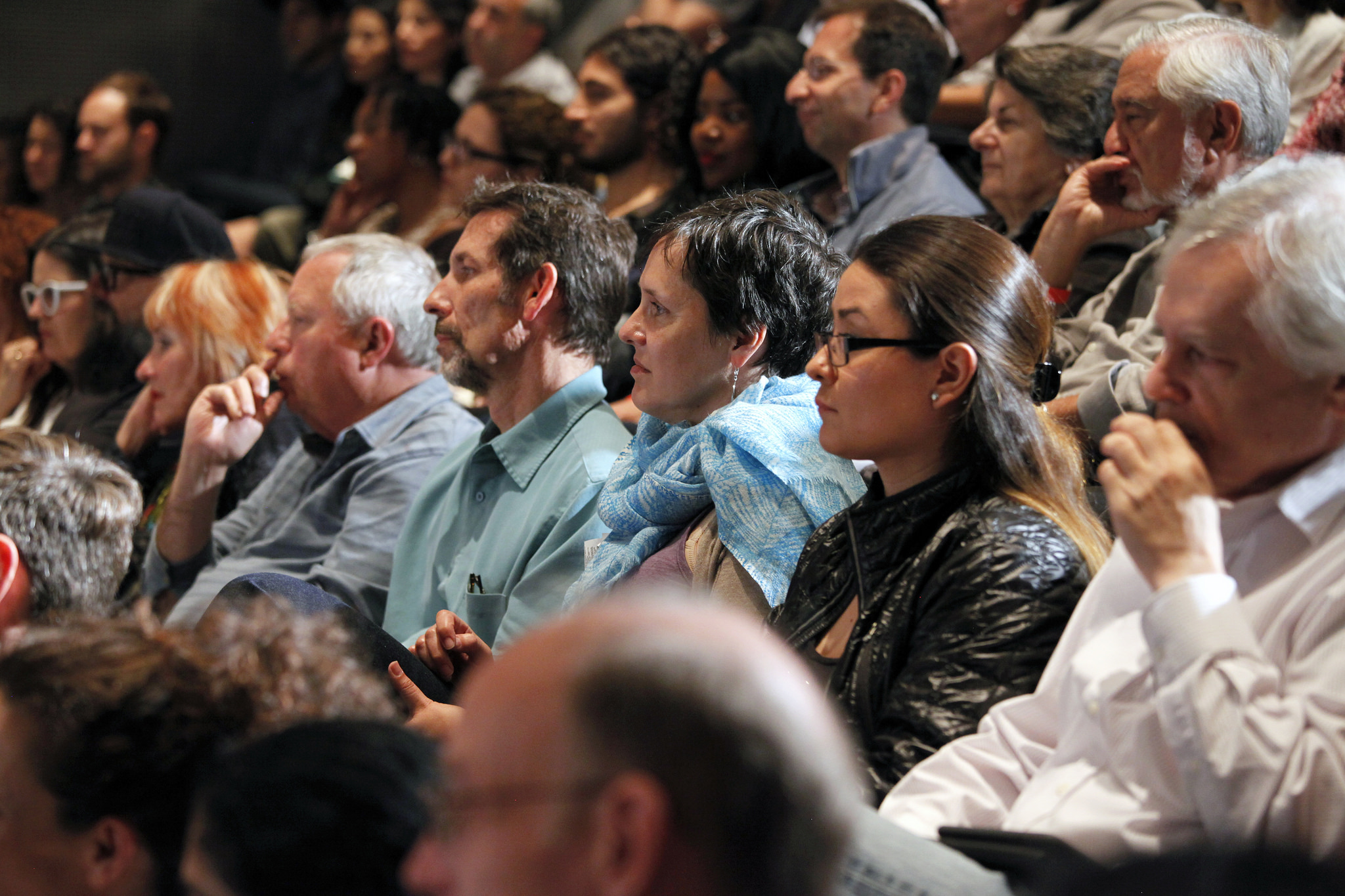 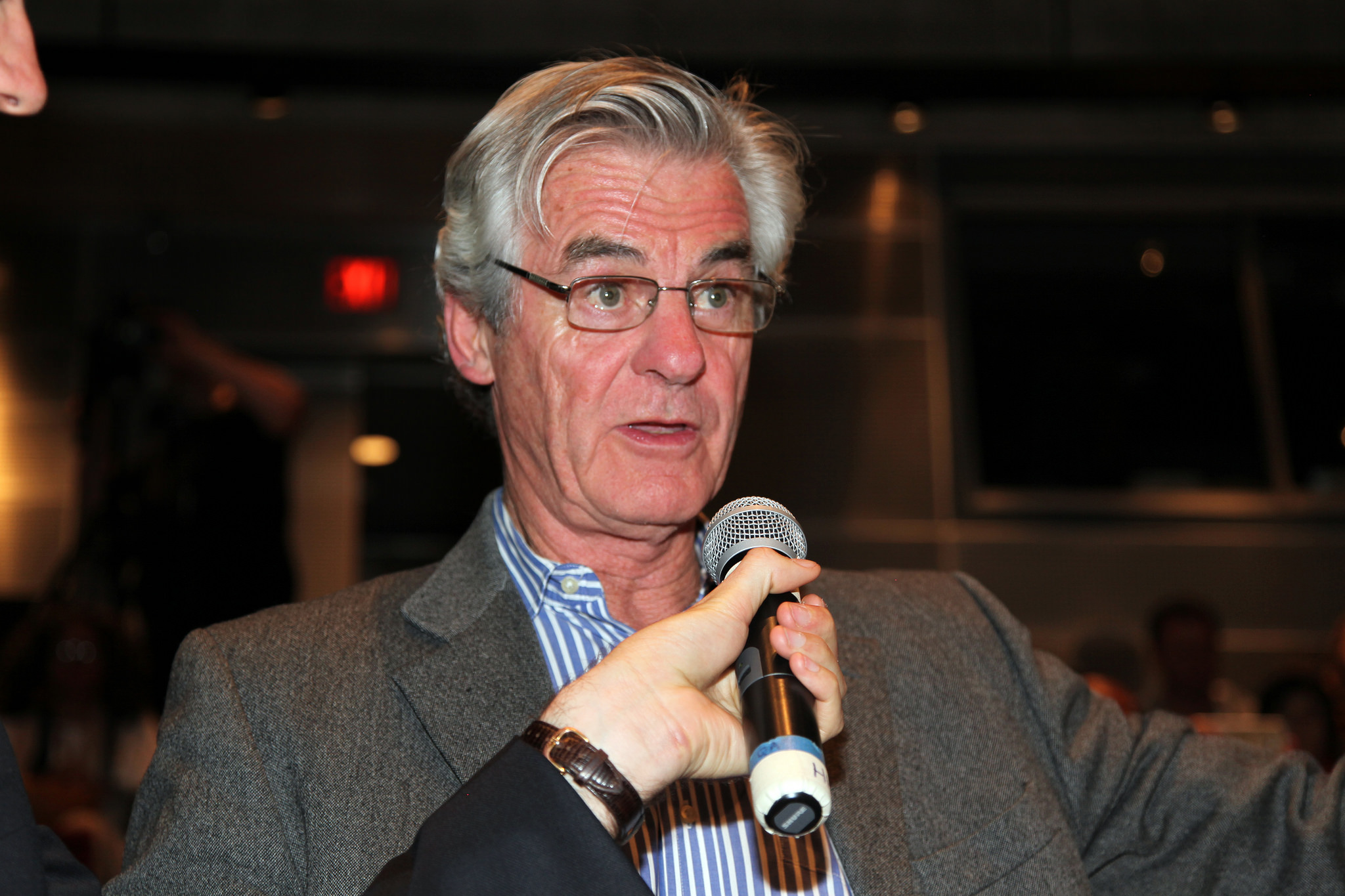 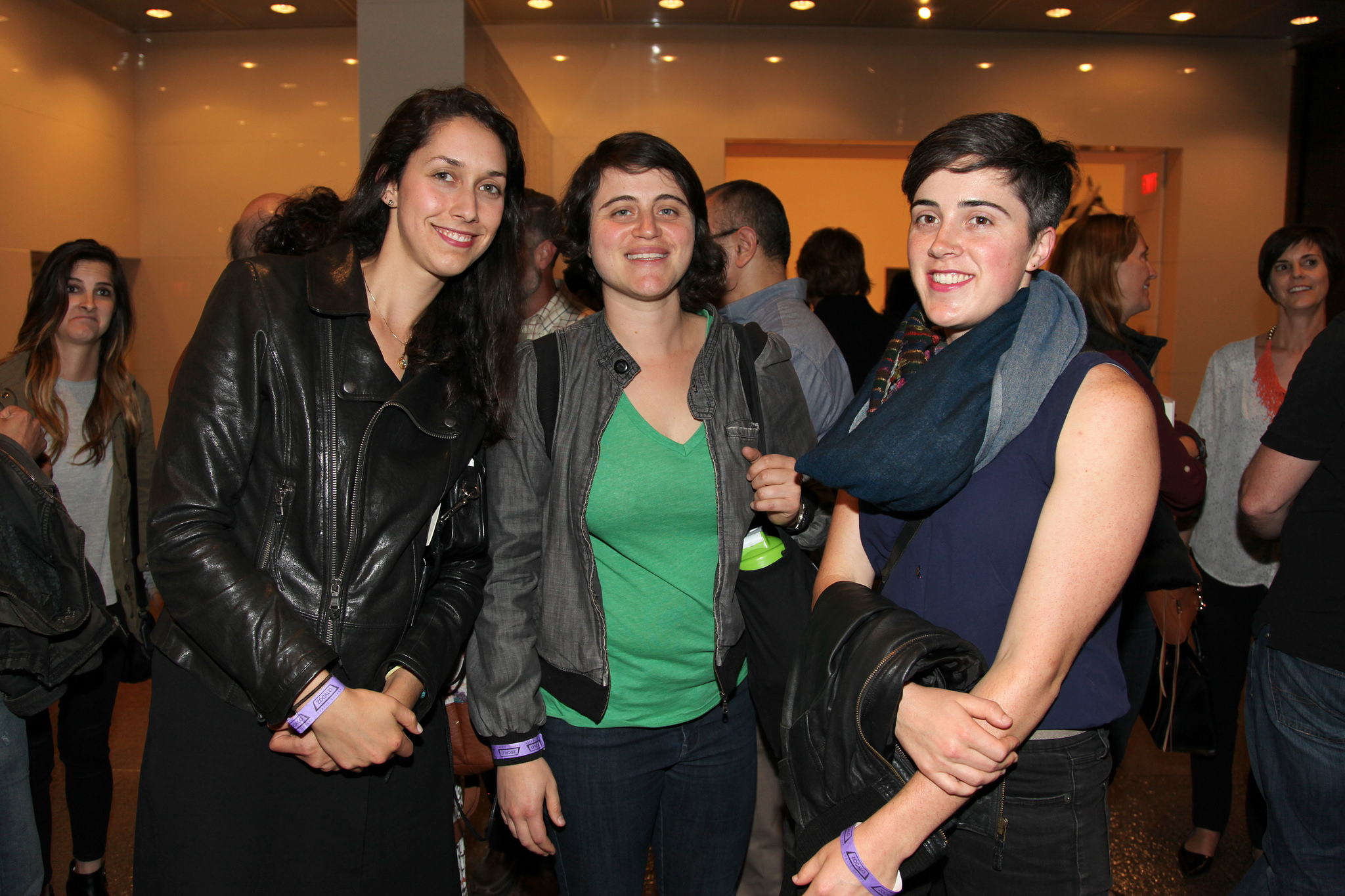 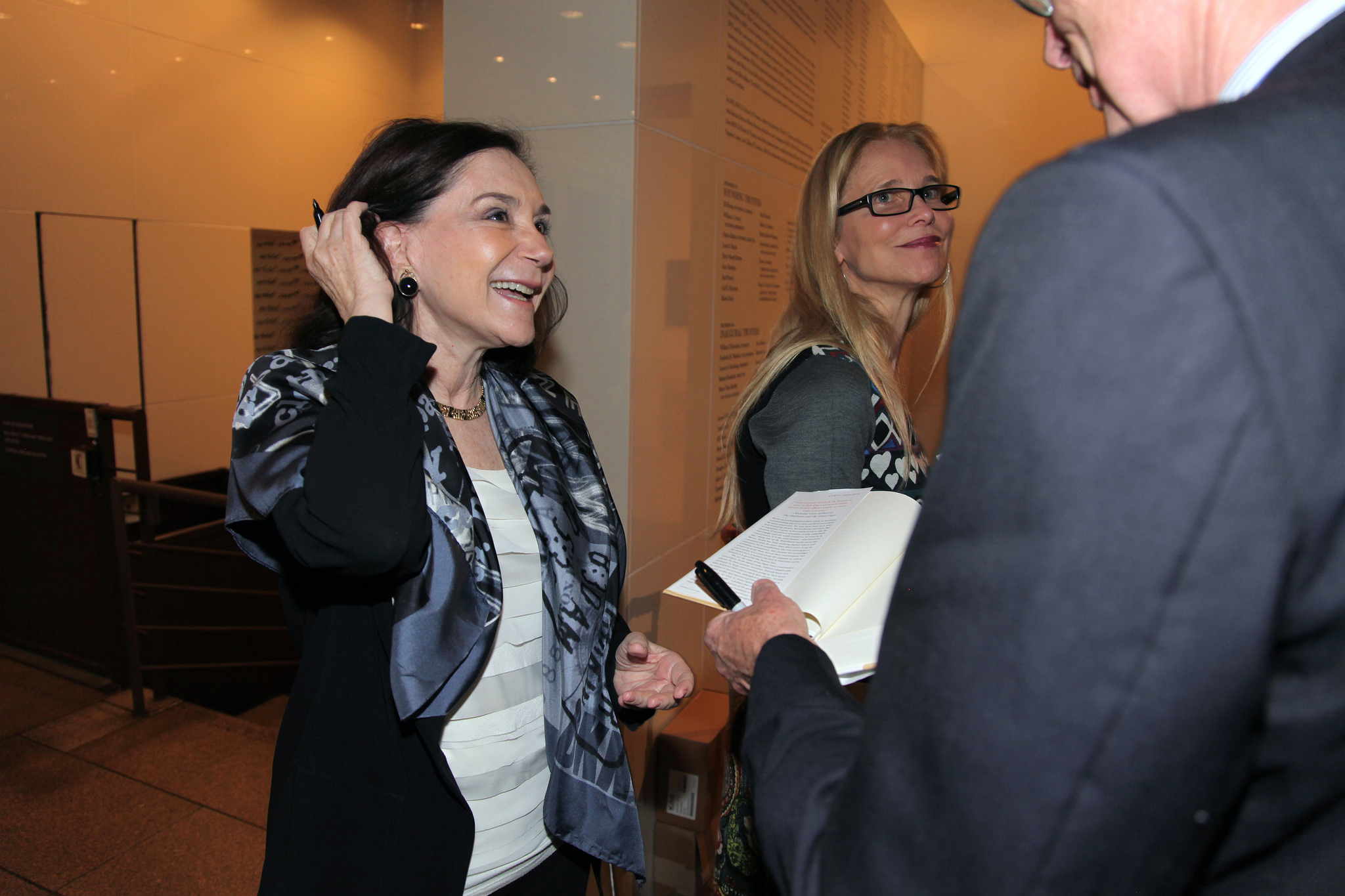 Sherry Turkle speaks with guests at the reception