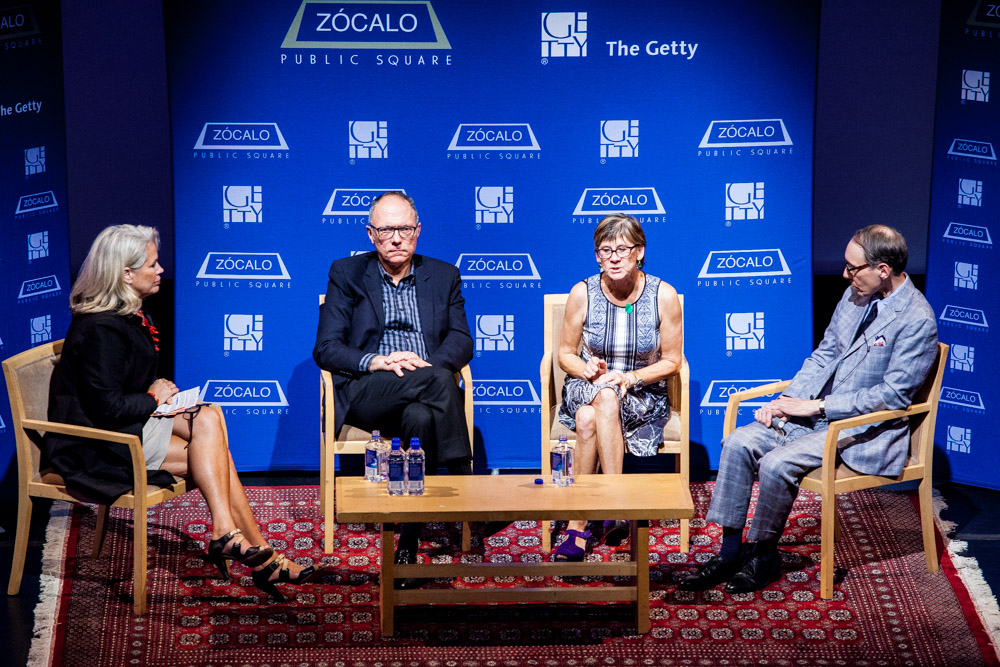 The yearning for intimacy with the sacred remains as potent today as it was in medieval days, when art was preoccupied almost entirely with depicting the divine. Last night’s spirited (pun intended), time-traveling Zócalo Public Square/Getty “Open Art” event at the Getty Center connected wide-ranging contemporary yearning (as evidenced by the success of the grilled cheese sandwich press, the recurring monthly apparitions of the Virgin Mary in the Mojave Desert, and the spiritual fervor at Burning Man) to the medieval art on display in the Getty’s exhibition Things Unseen: Vision, Belief, and Experience in Illuminated Manuscripts.

The evening’s moderator, documentarian Jody Hassett Sanchez, raised the question of whether artists illustrating religious scenes for the elites’ manuscripts or for more widespread consumption within churches were true believers or merely manipulators, hired to inspire certain emotions and reinforce the authority of church doctrine.

University of Southern California medieval historian Lisa Bitel is the author of Our Lady of the Rock, which examines the apparition of the Virgin Mary to the same woman on the 13th day of every month in the Mojave Desert. She is struck by the contemporary thirst not only to experience such miracles, but to witness the religious experiences of others. And so she was fascinated by the crowds that would come together every month to watch this woman see the Virgin in real time.

“And so there I was, watching these people watch someone else seeing the Virgin,” she said.

Leonard Norman Primiano, a religious studies scholar at Cabrini University in Philadelphia, stressed the great interplay between High Church depictions of the divine and those that appear in the vernacular, and how they each inform the other. “Your kitsch can be your sacred,” he said, pointing to two different people in the audience. That first person might walk down Broadway in downtown L.A. and pick up what he thinks is some tremendous religious “kitsch” that was never intended to be ironic.

At the same time, there is a great deal of fluidity not only between high art and the vernacular, but between classic Christian traditions and today’s spiritual imagery. Primiano compared a 1430 manuscript illustration of St. Francis receiving the stigmata to the endless stigmata representations you can find today on YouTube. The same motifs are handed down through the generations, even if today’s YouTubers are (according to Primiano) “visually illiterate,” having decoupled the images from their original content. But, Primiano also noted, the appropriation of spiritual images and traditions across secular and religious realms has always existed. “The Christians got the angels from the Etruscans,” he said.

Hassett Sanchez posited that the boundaries between the material world and the otherworldly were far more porous in the Middle Ages than today. So much more about life and their world was utterly mysterious, so people were more credulous about the supernatural.

But that doesn’t mean that people in our more scientific age have moved on from craving the supernatural. As Zócalo’s publisher suggested during the audience question-and-answer period, perhaps we now crave intimacy with apparitions and the supernatural for the opposite reasons medieval Christians might have—because so much in our lives is otherwise routine, predictable, known.

Bitel agreed that the craving is there, even as “the institutional bonds of our spirituality have loosened.” A Pew poll shows that 42 percent of Americans say they’ve changed religion.

To another question from the audience, on whether testimonials as an art form grew in popularity as a result of rising skepticism in society, Primiano reminded the audience that doubters are not a modern creation. “Remember,” he said, “Thomas the Doubter had to touch Jesus’ wounds to believe.”

So where does this yearning come from? Primiano recounted a recent trip to Mexico to find folk artists depicting miracles in their daily lives. A painting by one artist showed a standoff between the Virgin de Guadalupe and Donald Trump, with an American flag and scenes of Philadelphia (in Primiano’s honor) in between them.

Tolkin agreed with his fellow panelists that the yearning for spiritual experiences, coming from our “terror about our fate,” is not diminishing, though he encouraged the audience to embrace a broader definition and understanding of the religious. For Tolkin himself, seeing The Godfather in the 1970s in a crowded theater in Vermont, after waiting in line for hours, was a “religious communal experience.” And so, too, is attending the Burning Man Festival in the desert, which he has done for a number of years.

Such experiences don’t have to come at the expense of more traditional religious experiences. For Tolkin, one of the most compelling reasons to go to Burning Man is for the Sabbath services there. He explained feeling “the amplification of intensity” experienced with hundreds of other people—who are anonymous to you—on a Friday night in the desert, in the Jewish month of introspection, with the most beautiful of music. “There are naked women running around, too, everyone is weeping, and it breaks down the heart,” he said. It’s “a religious experience and a vision of paradise.”

But it’s perhaps even more elemental than that. When another audience member asked about how secularization alters our relationship to spiritual imagery, Bitel seemed to sum up the consensus on stage: “Religion is like lint in your pocket, it doesn’t go away.” 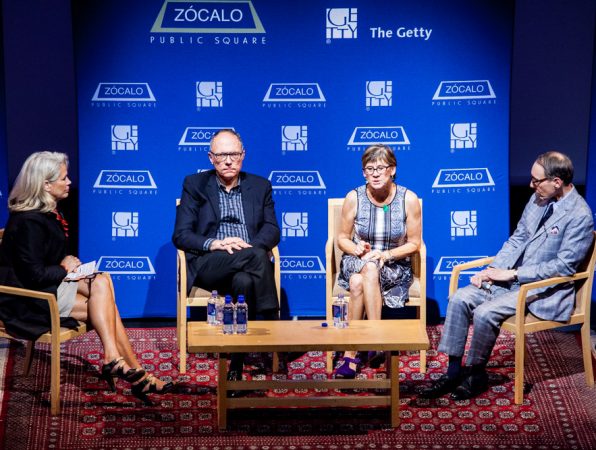 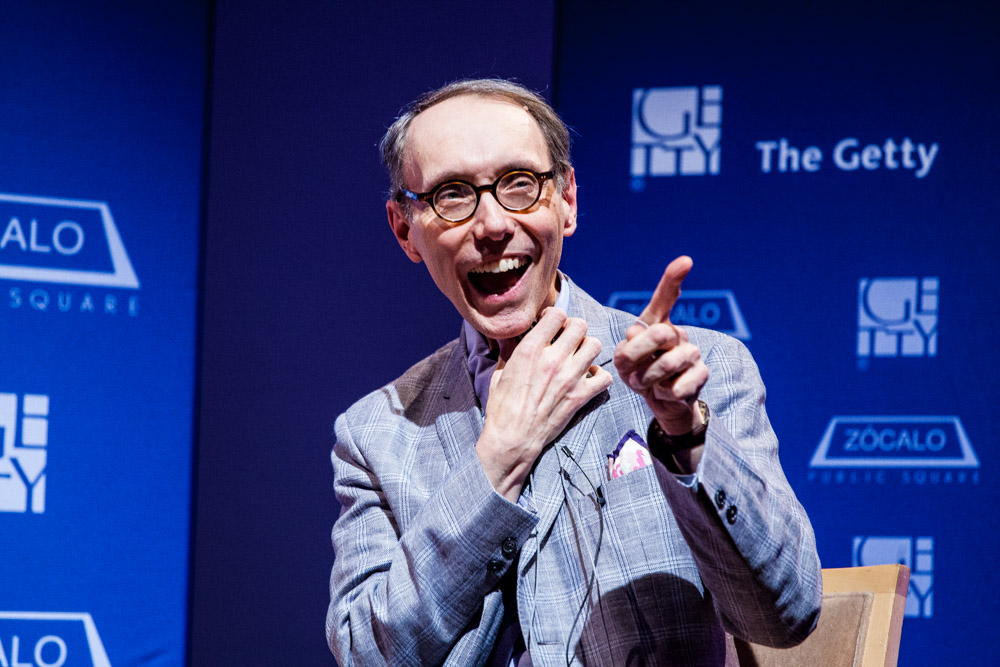 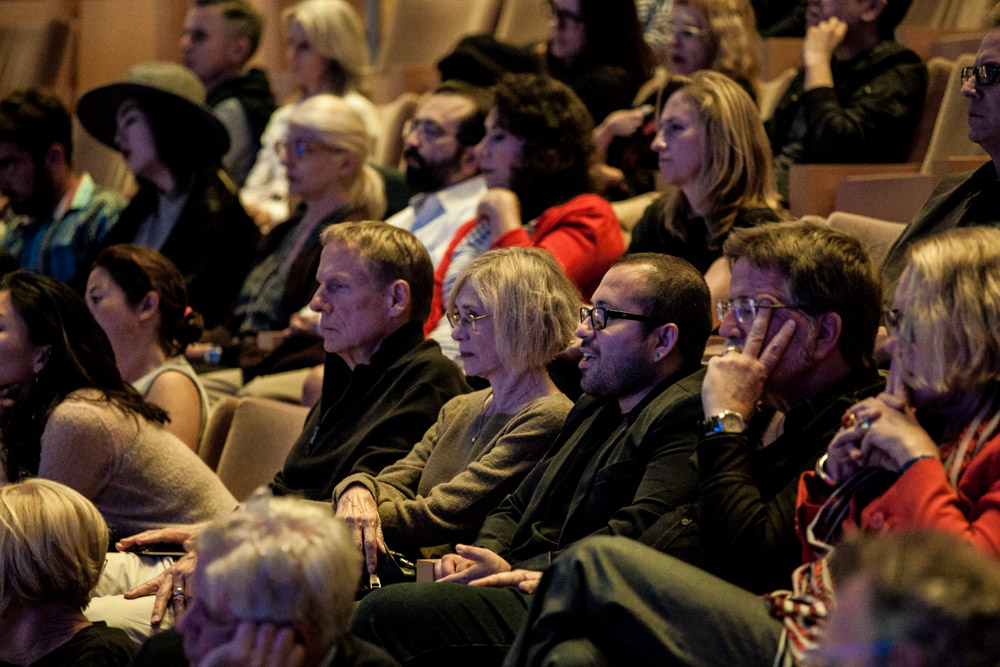 The crowd at The Getty Center 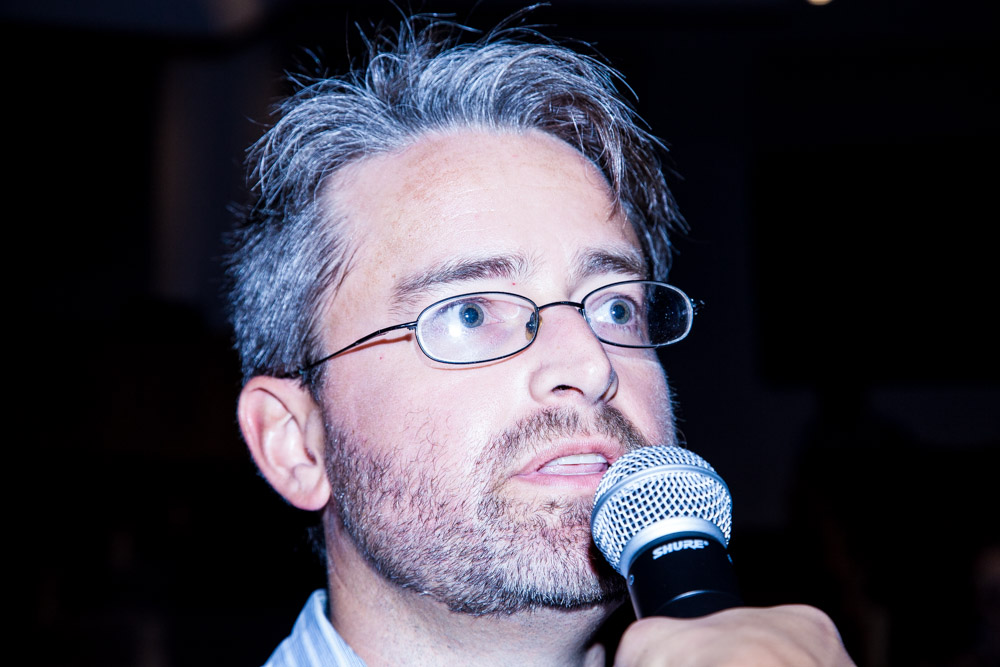 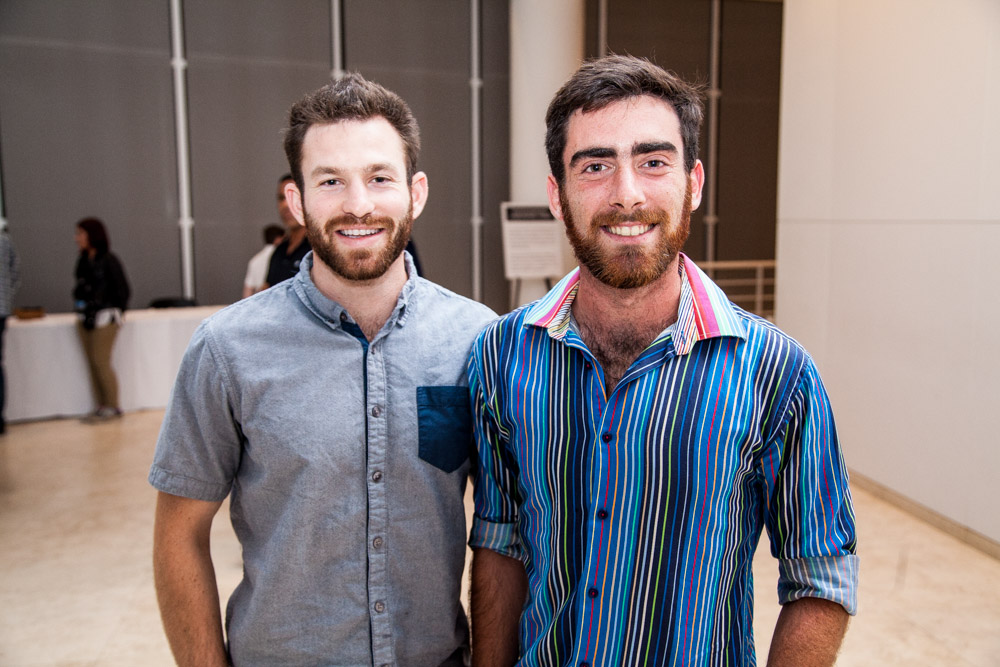 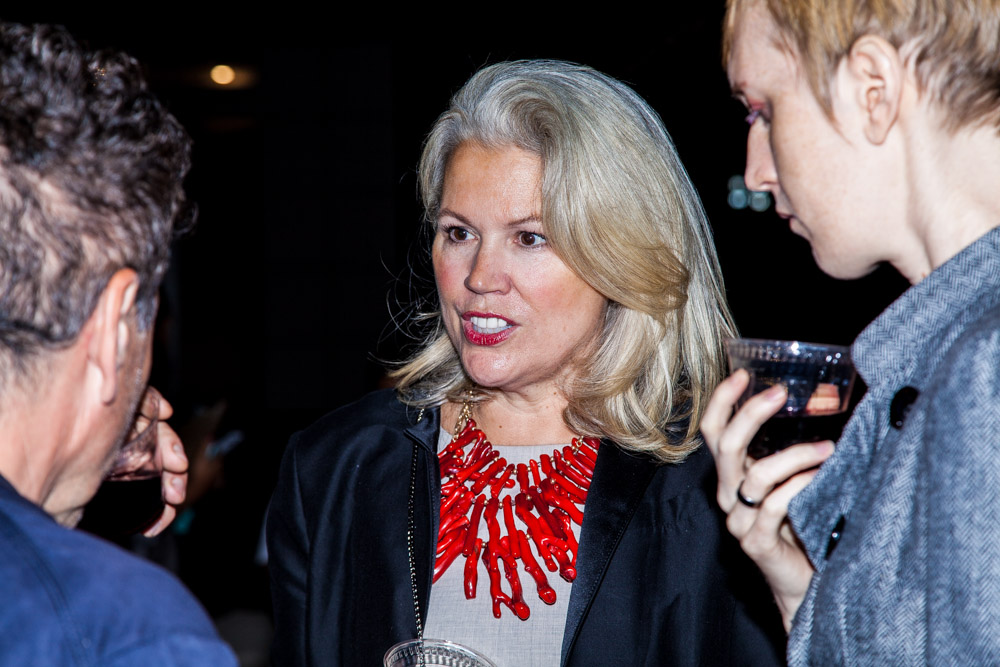 Jody Hassett Sanchez speaks with guests at the reception