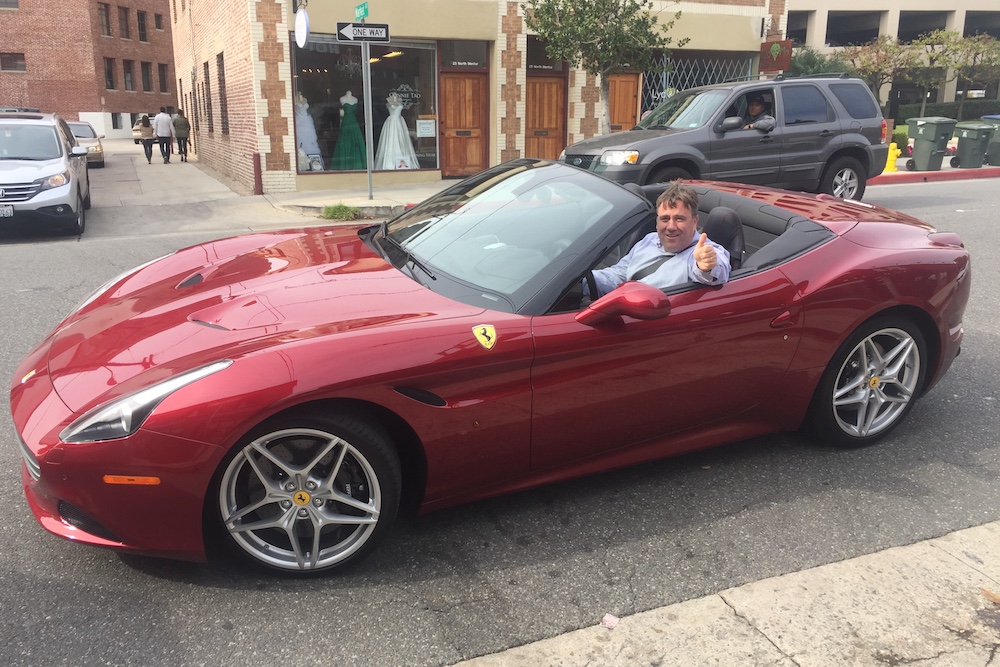 When I finally got the keys to California, I wondered how fast it would go. So, on the 210 freeway, I floored the accelerator and within seconds I was driving 100 miles per hour.

I immediately felt exhilaration—and fear. This speed was totally unfamiliar to someone who has spent his life driving beaten-up Toyotas. In California we like to think we can move as fast as our imaginations can take us, but this shiny red convertible named California moved too fast for me.

I was not driving my own car. Ferrari let me drive its latest California model—officially the Ferrari California T—for four rainy January days. I requested the loaner because I thought it might provide some escapist fun at a difficult time for our state and country, and because, on the north side of age 40, I deserve a mid-life crisis.

But for journalistic purposes, I wanted to know whether the rare car named for our entire state (it’s far more common to name automobiles for specific California places, like the Chevrolet Malibu or Tahoe) could really embody California. I suspected that the folks back in Maranello, the Italian town where Ferrari makes its cars, might just be using our state’s name to sell a pretty automobile.

My suspicions were wrong. The Ferrari California was a revelation—as wonderful as our most kaleidoscopic dreams of the Golden State can be. The real problem was that Ferrari’s representation of California may be too faithful. The car is so damn perfect that it has a way of reminding you of our state’s imperfections.

The Ferrari California aligns with the state on the level of metaphor. California is famously the “Great Exception” among American states, as the 20th century author Carey McWilliams named it, and California is an exception among Ferraris. But the nature of that exceptionalism might surprise you; California is not the most expensive or the most glamorous or the fastest Ferrari.

To the contrary, Ferrari markets the California as the most practical and versatile of its cars. In its ultra-luxury, high-end way, it nods to the realities of modern California lives—our business, our diversity, our traffic. 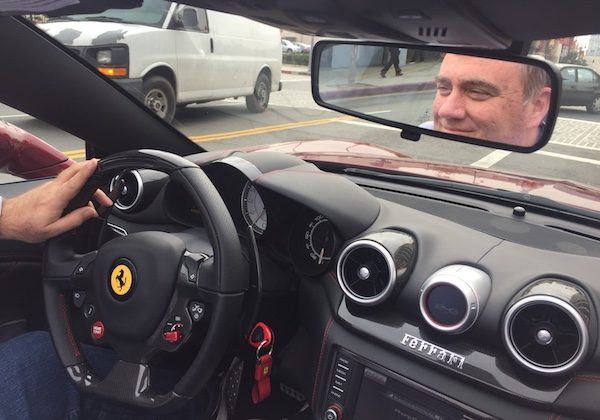 The California is not a sports car, but a convertible grand touring car, built for comfort, which makes sense if you’re a Californian who works far from where you live, has kids, or is often stuck on our state’s abysmally congested freeways. It’s got two doors, but also enough space in back to fit two children’s car seats.

“It is a little bit an exception,” Edwin Fenech, the president and CEO of Ferrari North America, told me by phone. “It’s able to be very versatile. You can drive it every day, and it’s very easy to drive. You can go to the grocery store with your car.”

This has frustrated some Ferrari purists, who seem to equate the brand’s value with extreme male self-indulgence (you’ll see it referred to disparagingly as the “chick” Ferrari online) and complain about everything from its cupholder to its eight cylinders (most cars make do with four or six, but some Ferraris have 12).

But Fenech said that versatility shouldn’t detract from the car’s mystique, or California’s. It’s supposed to represent our sun-kissed Hollywood beauty, the kind he experienced as a young professional who saved up to fly his grandparents to California and guide them on a long drive up the coast, from Los Angeles to Monterey to San Francisco. The memory of that trip is a touchstone for Fenech and his family.

“It’s a car that has all the attributes of being a Ferrari,” he said, referencing “high performance, elegance and flair.” He added pointedly that, in an era moving with surprising swiftness toward self-driving—or autonomous—vehicles, Ferrari wanted to affirm its support for Californians determined to steer clear of the trend. After all, what is more emblematic of the Golden State than our belief in primacy behind the wheel?

“We are the ones who are going to defend the right to drive,” Fenech told me. “Americans in California should have the right to drive every day … Don’t brainwash the new generation with autonomous driving—it’s so beautiful, driving.”

Fenech said that, while Ferrari makes all its cars in Italy, the U.S. and California also have defined the brand and its market. The race car driver Luigi Chinetti, who immigrated to the U.S. in the middle of the 20th century, pushed Enzo Ferrari to build his own cars and then imported them here.

Today’s Ferrari California draws on our current infatuation with everything mid-20th century. Ferrari produced three different California models between 1957 and 1967. (Filmmakers used replicas of a 1961 Ferrari 250 GT California Spider in the classic ‘80s comedy, Ferris Bueller’s Day Off). The car became such a valuable collector’s item (some have sold for $20 million or more) that Ferrari revived the brand in 2008.

The California is not a sports car, but a convertible grand touring car, built for comfort, which makes sense if you’re a Californian who works far from where you live, has kids, or is often stuck on our state’s abysmally congested freeways.

The newest iteration, the Ferrari California T, was introduced for the 2015 model year. Fenech said the car fits California in multiple ways. It’s designed with a dual-clutch automatic transmission and a technologically advanced suspension, which makes it easy to navigate through the dense neighborhoods of America’s most urban state. “It’s the most urban Ferrari in our range—you are able to drive it comfortably in the city,” he said. And the T stands for Turbo, as in the twin-turbo, 3.9 liter engine, which is a nod to our environmental awareness. It can still get the car to 196 miles per hour but uses less fuel and decreases the car’s emissions. (The auto press has speculated that all Ferraris will eventually be hybrids).

The Ferrari representative who loaned me the car encouraged me to do as much as I could with it. So I tested its California-ness. I drove it for 90 minutes through bumper-to-bumper traffic to my office in Santa Monica. I navigated potholes in downtown L.A. (The seats are so comfortable you barely feel the bumps). I made my rounds to the grocery store and the In-N-Out drive-through, complete with the requisite in-car consumption of a double-double. I chauffeured my kids to school, secured in their car seats in the back. And I carted luggage, golf clubs, and Little League equipment in the trunk.

The car held up. I felt far safer while driving it in a rainstorm or on bad roads than I do with my usual ride, a five-year-old Prius. With the top down, I loved the way that the car connected me with other drivers and pedestrians, some of whom offered a thumbs-up and asked what the car was.

When I took it out on PCH with the top down, the ride was joyful. And I’ve never had an automotive experience happier than the drive up Angeles Crest Highway, with the radio first playing Tom Petty and the Heartbreakers’ “California” (“It’s time we better hit the road”) and then R.E.M’s “Electrolite” (“Hollywood is under me. I’m Martin Sheen. I’m Steve McQueen. I’m Jimmy Dean”).

I didn’t want to keep this experience all to myself, so I took the historian Bill Deverell, director of the Huntington-USC Institute on California and the West, for a spin, hoping for expert commentary on the car’s California-ness. He took exception to the suggestion that such a luxury item could be for anyone but the most moneyed Californians. But mostly, he just enjoyed the ride, and the respite from work. “It sure is fun,” he said.

Of course, the car, like so many wonderful things in our state, fails the core test of accessibility: the base MSRP of the Ferrari California T is $198,973. The one I drove costs $240,00. By Ferrari standards, that’s a bargain (the hybrid La Ferrari sells for well over $1 million), which is by design: An estimated half of Ferrari California buyers are new to the brand. But the car I was driving would cost this non-profit journalist more than three years’ take-home pay.

Which is another thing that makes the California very Californian. The good life is highly visible throughout our state. But only a few can afford more than a brief ride.