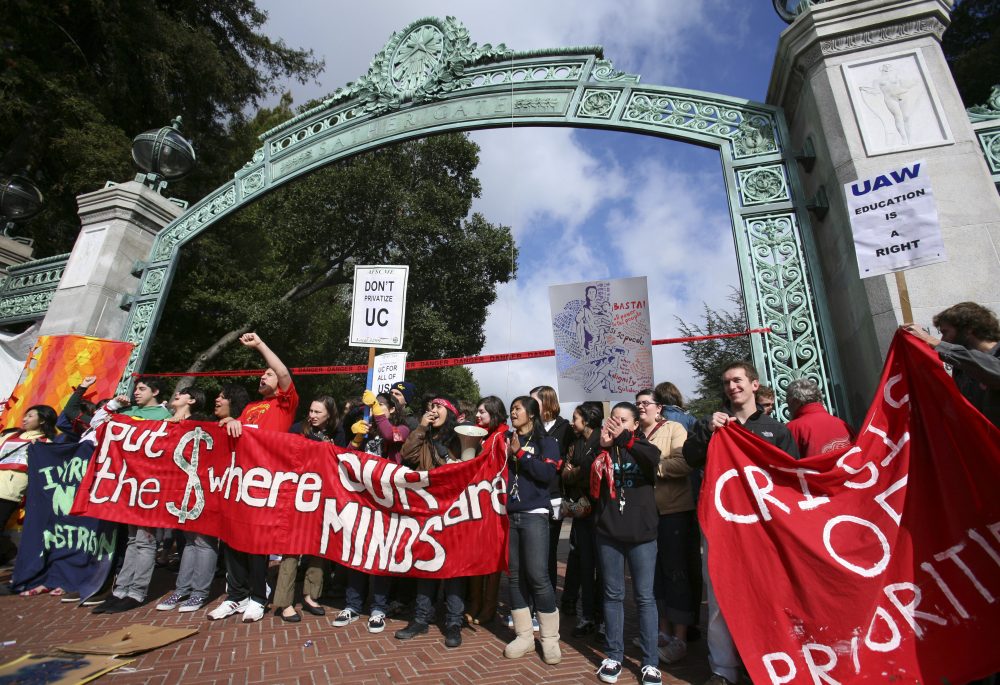 Political partisans of many stripes love to scapegoat UC Berkeley. Students block Sather Gate on the campus during a protest on March 4, 2010. Photo by Ben Margot/Associated Press.

Recent headlines should remind Californians of yet another way we are lucky. Our state has the world’s best scapegoat: you.

You—our most distinguished public university and all the people, institutions, and neighborhoods surrounding it—do far more than research and educate. You serve the vital social purpose of being a convenient punching bag for angry people of all manner of ideological preoccupations.

The right and the center can pin all of California’s liberal sins, real and imagined, on you. And the left sees a reactionary threat in everything, from your fundraising, to police action on or near campus, to the presence of law professor John Yoo, who defended torture under President George W. Bush. Sometimes you’re denounced as dangerously permissive, and other times you’re frighteningly authoritarian.

And when it comes to higher education’s struggles, legislators on both sides of the aisle blame you for everything: You’re too arrogant, and you charge too much and you let in too many out-of-state students—even though the need to pocket that higher out-of-state tuition is the direct result of the legislature’s systematic disinvestment in you and your sister university campuses across California.

Yes, California as a whole takes a lot of critical blows. But can you imagine how more bloodied the rest of our state would be if we didn’t have you around to absorb so much abuse?

In recent months, as a furious world chokes on its own populist vomit, it’s been deeply reassuring to see you play your familiar role as California’s sacrificial lamb with your practiced aplomb.

First, you suffered widespread condemnation from President Trump and the media—both for your decision to cancel a speech by the Breitbart News provocateur Milo Yiannopoulous, and for the anarchist, anti-fascist violence (from arson to window smashing) that prompted the cancellation. And you didn’t gloat or demand apologies—because no one is ever sorry for slurring you—when Yiannopoulous was subsequently disgraced for defending pedophilia.

You and the Berkeley police have patiently dealt with pro-Trump provocateurs who hold rallies near campus to start fights—as well as the anti-Trump counter-protesters who took the bait recently. And most recently, you’ve taken incoming from the left for permitting the right-wing diva Ann Coulter to speak on campus, before you got roasted by the right for canceling her appearance because you couldn’t guarantee her safety.

You can’t win in any of these fights, of course, which is why you’re such an easy target. And yet you endure—which is precisely what makes you so valuable to California. And I want you to know that, while Californians are unlikely to thank you publicly, many of us are quietly grateful to you for keeping so many cranks and extremists focused on you, and away from our own neighborhoods and campuses.

What I marvel at is your ability to relish your role as whipping post, without complaint or counter-attack. I know folks in working-class places like Bakersfield think they’re the most hardened Californians, but the truth is they’re not even half as tough as you, California’s leading scapegoat.

Yes, California as a whole takes a lot of critical blows. But can you imagine how more bloodied the rest of our state would be if we didn’t have you around to absorb so much abuse?

When I think of you, I can’t help but recall the work of the late Rene Girard, one of the 20th century’s greatest philosophers and a professor at your rival Stanford (so I’ll understand if you take him with a grain of salt). Girard wrote that modern society has become addicted to scapegoating; we take our anger out on sacrificial lambs just as cruelly as ancient societies did, most famously in a certain Crucifixion. (Yes, Jesus really loves you, Berkeley, and not just because you’re home to the Graduate Theological Union.)

Most pointedly, Girard said, this scapegoating has value—in bringing people together and reducing the scale and damage of violence. He wrote: “When human groups divide and become fragmented, during a period of malaise and conflicts, they may come to a point where they are reconciled again at the expense of a victim.”

Indeed, you, as scapegoat, are a protector of many vulnerable people. Just look at the rest of the country and the world, where elected leaders and voting publics are scapegoating whole classes of people—migrants, Muslims, Mexicans. We haven’t had the same level of scapegoating in California, and one reason for that is you take such a heavy helping of the racists’ rage.

You’re such a good scapegoat because you’ve had so much practice. You were the largest public university in the world by 1912, and your city has been a pioneer in everything from domestic partnerships to curbside recycling to Alice Waters’ cooking—and leaders always take heavy fire.

Politicians love to hate you. Ronald Reagan built the most successful American political career of the last half-century on scapegoating you; he ran for governor declaring he would clean up “the mess at Berkeley” and made you a leading symbol of “a leadership gap and a morality and decency gap” in the country. In 1969, he made great show of sending the National Guard into People’s Park.

Of course, his successor, Jerry Brown, liked to poke you, too, even though he was a graduate. Things were so bad between you two during his first tenure that his gubernatorial papers ended up at USC. Pretty much every governor since then has taken swipes, both rhetorical and budgetary, at you.

If I were you, on the business end of so much blame-shifting, I’d be tempted to point to the reality: that Berkeley itself is not so different from the rest of California. The city has a mix of the beautiful and the gritty, and for all its supposed radicalism, it contains the regular chains—Starbucks, McDonald’s—of every university town. And your university is mostly just a collection of kids from all over our state and our world.

But you won’t make this argument because you know that perception is reality, and there’s no use in fighting a stubborn perception. After all, that was a central insight of Bishop George Berkeley, the Irish philosopher for whom you are named. Berkeley suggested that the objects we see in the world are really just ideas, made real only by the minds of those who perceive them.

Since the scapegoating of Berkeley isn’t really about you, there’s not much you can do about it. Except steel yourself for more.

Girard, the Stanford philosopher, argued that as humans experience more conflict and identity-based backlash, scapegoating increases. “We easily see now that scapegoats multiply wherever human groups seek to lock themselves into a given identity—communal, local, national, ideological, racial, religious, and so on,” he wrote.

I’m sorry, Berkeley. Times being how they are, California is going to need you to shoulder even more of the blame.