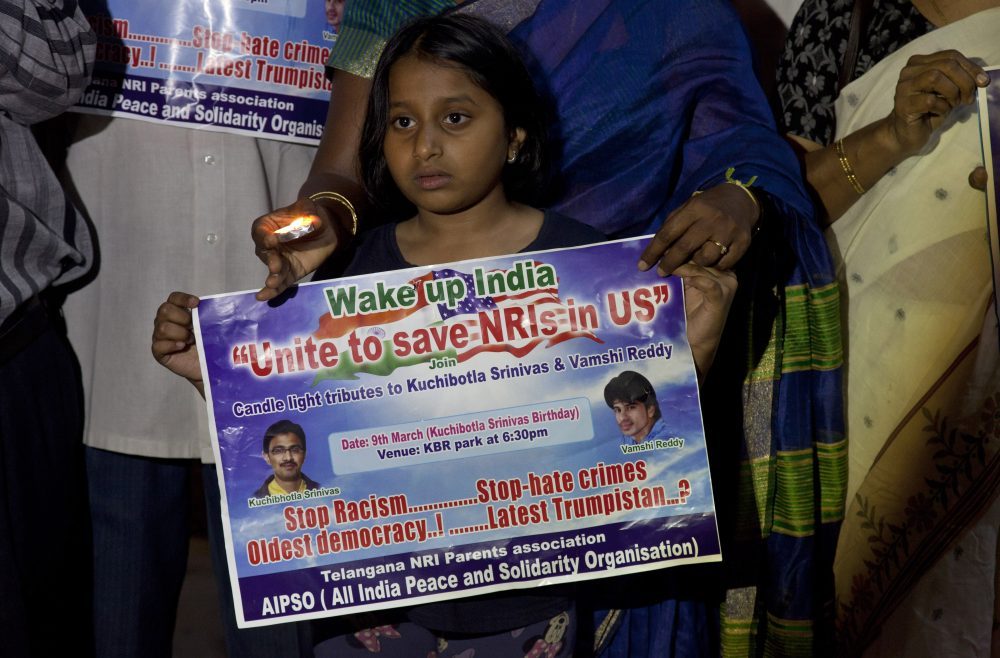 A girl holds a placard as she joins parents of Indians living abroad and others in a candlelight vigil to pay tribute to Srinivas Kuchibhotla in Hyderabad, India, March 2017. Kuchibhotla was a 32-year-old engineer who was killed in an apparently racially motivated shooting in a crowded bar in a suburb of Kansas City in February. Photo courtesy of Mahesh Kumar/Associated Press.

Of the Trump administration’s anti-immigrant actions, the best known are the barring of immigrants and refugees from Muslim countries, and the rounding up and deporting of undocumented immigrants, even those without criminal records or those who came to the United States as children. Now Trump has proposed slashing the number of legal immigrants, restricting family reunification, and moving towards a “merit-based” system that favors highly-educated, highly-skilled, and English-speaking applicants.

The impact of this era’s anti-immigrant sentiment is broad, and touches immigrants and native-born Americans in unforeseen ways. The problem is that Angelenos don’t yet recognize just how broadly this atmosphere is hurting immigrants of all backgrounds, because too many different kinds of people get left out the narrative. Some of these omissions are due to prejudice and divisions within immigrant communities themselves.

As an example of the problem, let’s look at the cases of two individuals, Srinivas Kuchibhotla and Vincent Chin, and the different reactions to them among Asian Americans and U.S. residents of Asian heritage.

Vincent Chin’s name may well be familiar to you. He was bludgeoned to death 35 years ago in a Detroit suburb by two white men who mistook him for Japanese (the assailants blamed the Japanese for the decline of the U.S. auto industry). Chin’s death, followed by the lenient sentence of three years’ probation for both men, sparked outrage among Asian Americans from coast to coast, and led to protests in Los Angeles.

Vincent Chin’s death is now a rallying cry for Asian Americans to mobilize across ethnic boundaries in the face of anti-Asian prejudice and violence, and gross injustice. This is highly relevant now in Los Angeles, where the Asian American population has grown by 20 percent in the last decade.

Asian Americans collectively identified with Chin, seeing in his tragic fate our own vulnerable status, in a country that repeatedly has questioned our allegiance—a vulnerability that, among Asians, cuts across national origin, ethnicity, nativity, and class.

But the name Srinivas Kuchibhotla is less familiar, even though he made the news more recently.

On February 22, Kuchibhotla, a 32-year-old Indian engineer in Kansas, was shot and killed by a white man who mistook him and his friend, Alok Madasani, for Iranians. Witnesses said that the man yelled at Kuchibhotla and his friend to “Get out of my country!” before shooting both, and killing Kuchibhotla. The suspect has been charged with premeditated first-degree murder, and the case is being investigated as a hate crime.

Among whites, 41% believe that Indians are not Asian, while 35% of Blacks and Latinos feel the same. Moreover, the other Asian ethnic groups in the survey … are just as likely to perceive Indians as not Asian, despite the fact that Indians see themselves as Asian.

Kuchibhotla’s death, compared to Chin’s older story, remains obscure, and the collective silence on the part of Asian Americans is deafening. While Indian Americans and Indians have claimed Kuchibhotla as one of ours, other Asian Americans have not done the same.

So why do Asian Americans continue to rally for Vincent Chin even 35 years after his death, but fail to do the same for Srinivas Kuchibhotla?

In part, it is because many Asian Americans do not perceive Kuchibhotla as one of us. Findings from the 2016 National Asian American Survey show that while Americans—including Asian Americans—see Chinese, Koreans, and Japanese as Asian, they view Indians differently. Among whites, 41% believe that Indians are not Asian, while 35% of Blacks and Latinos feel the same. Moreover, the other Asian ethnic groups in the survey—Chinese, Filipinos, Vietnamese, Koreans, Japanese, Cambodians, and Hmong—are just as likely to perceive Indians as not Asian, despite the fact that Indians see themselves as Asian.

In short, Americans—including Asian Americans—draw a sharp boundary between Asian and non-Asian that separates East Asians (Chinese, Korean, and Japanese) from South Asians (Indians). This explains the silence.

In an era in which the president is creating fissures among Americans, and excluding groups from the American fold, the bitter irony is that many Asian Americans are doing the same within our own group. This is a mistake.

Social psychologists have shown that Asian Americans are stereotyped as competent but cold by Americans of all racial and ethnic backgrounds. Hence, despite our achievements—including obtaining graduate degrees, opening businesses, and succeeding in professional fields—Asian Americans are perceived as unsociable, and, therefore, incapable of gaining support from other groups. This makes Asian Americans an easy target for prejudice and discrimination. Interestingly, Indians are the only Asian ethnic group perceived as both competent and sociable, but this has not shielded them from nativist prejudice and violence.

Without the support from other groups—including other Asian Americans—we set ourselves up for a harder fight when another of us becomes the victim of a hate crime. If we cannot mobilize among ourselves and garner unequivocal support for Srivanis Kuchibhotla, we cannot expect that other groups will step up and back us. This is paramount in a political climate in which the current administration wields fear and unleashes prejudice to divide Americans. Asian Americans need not follow suit. For starters, we could embrace Srivanis Kuchibhotla as one of our own, rather than one of “them.”

So rather than fracturing along ethnic boundaries, Asian Americans can decide to unite across them, and coalesce on the many issues that unify us. The majority of us strongly oppose banning Muslims from entering the country, and we support a pathway to citizenship for undocumented immigrants. And despite what the Department of Justice may believe about Asian Americans’ position on affirmative action, two-thirds of us support affirmative action programs designed to help blacks, women, and other minorities get better access to higher education.

The current administration, however, has proposed policies that fly in the face of our values, priorities, interests, and concerns. What divides us pales in comparison to what unites us. When Asian Americans recognize this, we will become a powerful political force.