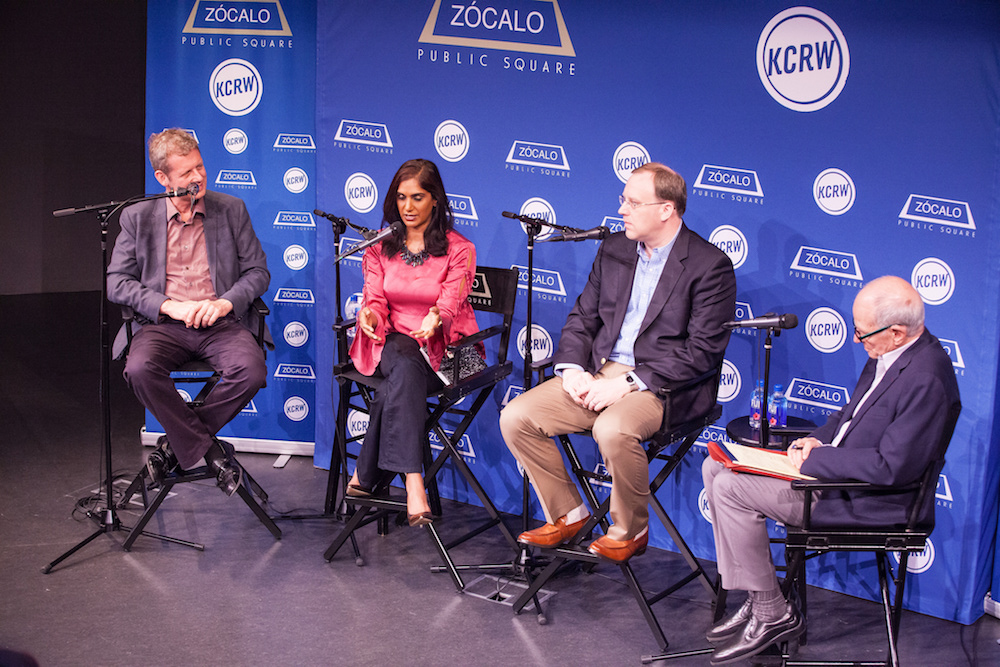 So, Larson said, the Founders pointedly included a limited definition of treason in the U.S. constitution. The more expansive version in English law made it easier to punish those who opposed the King as traitors—with not just execution but decapitation and disembowelment. The Founders had another reason for making treason hard to charge and prove: to discourage political opponents from accusing one another of treason and being un-American.

“What the framers did not want was to have a democracy where the winning side prosecutes the losing side for treason,” Larson said, a sentiment that echoes in today’s bitterly partisan American politics.

Larson explained the history in response to questions from Olney, the legendary public radio host and dean of Southern California journalists, during the event at the National Center for the Preservation of Democracy in Los Angeles. Larson and his fellow panelists, all lawyers and scholars, emphasized that treason is the only crime defined in the U.S. constitution: “Treason against the United States shall consist only in levying war against them, or in adhering to their enemies, giving them aid and comfort.” It is also the only crime with a standard of evidence: “No person shall be convicted of treason unless on the testimony of two witnesses to the same overt act, or on confession in open Court.”

UCLA legal scholar Eugene Volokh said those requirements—treason must occur in the context of war, and there must be two witnesses—severely limit prosecution for treason. When Americans commit crimes that are popularly characterized as treason, they are usually charged with other crimes. Even assisting countries like Russia and China, with whom the U.S. is often in conflict, isn’t treason because we’re not currently at war.

“There is a vast range of bad behavior, including bad behavior having to do with other countries,” he said, “a tiny fraction of which is treason.”

Another panelist, senior lecturer at Yale’s Jackson Institute for Global Affairs Asha Rangappa, had firsthand dealings with what might be called treason in her previous job as an FBI special agent. She worked to identify those engaged in intelligence for foreign governments, and then flipped them to help the U.S. “They are essentially betraying their country for the United States,” she noted. “This is the spy game. We do it. Other countries do it.”

But American double agents do not necessarily commit treason under the Constitution, she said, given the requirements of war and witnesses. The notorious Robert Hanssen, a former FBI special agent who provided information to the Soviet and Russian governments for two decades, wasn’t convicted of treason, but of espionage.

“There are very few laws against spying,” said Rangappa.

Rangappa suggested using alternative words to convey betraying the country—her preference is “treachery.” In the Inferno, Dante reserved the ninth circle of hell for treachery. “He made it the lowest, blackest, and furthest from heaven,” she recalled. “When I talk about Edward Snowden or Chelsea Manning,” both of whom she said she considered traitors, their behavior “may not be the legal definition of treason,” but it is “treacherous.”

Snowden and Manning are part of a long line of American figures who are perceived at least by some as traitors. The panelists mentioned Benedict Arnold (who “remains the greatest traitor America ever had,” said Larson); Robert E. Lee (Volokh saw him as a traitor but noted that the Civil War shows the wisdom of having a pardon power to promote national reconciliation); and John Walker Lindh, who aided the Taliban (he pleaded guilty to charges lesser than treason).

The panelists also argued in complicated detail over Anwar al-Awlaki, a U.S.-born cleric who became an Al Qaeda propagandist and was killed by a U.S. drone on orders of President Obama. Intriguingly, panelists said that al-Awlaki’s online recruitment videos would not meet the Constitution’s requirement of two witnesses. However, Larson allowed that if the Founders had anticipated video technology, they might have included such a video declaration as a standard for proving treason.

During the question-and-answer session, audience members pressed the panelists to comment on the ongoing investigations surrounding Russia, the 2016 elections, and President Trump and his associates. One audience member asked: “Could you explain what might happen when we have the results of special counsel Robert Mueller’s investigation?”

“Many things,” said Volokh, “but not a treason prosecution.”

Rangappa praised Mueller, her former boss when he served as FBI director, but said that people expecting his investigation to put people in prison may be disappointed. Even if he uncovers bad behavior, it could be difficult to prove federal crimes. At another point in the evening, she noted that providing information to Russians on how to use Facebook to target certain voters is not a crime, and definitely not treason.

She added that it’s important not to equate what’s legal with what’s right. She recalled doing FBI background checks of government appointees, and asking questions about people’s loyalties, bias, personal finances, or use of alcohol and drugs. The point of such checks isn’t to identify crimes so much as it is to identify people who should not be in positions of public trust.

“There’s a bigger picture we lose sight of when we just focus on legality and criminality,” she said. 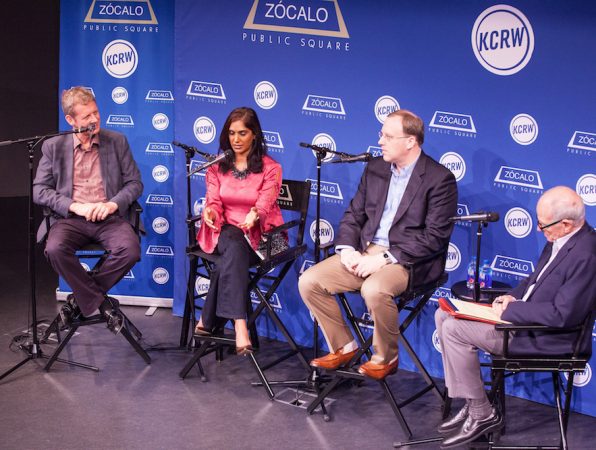 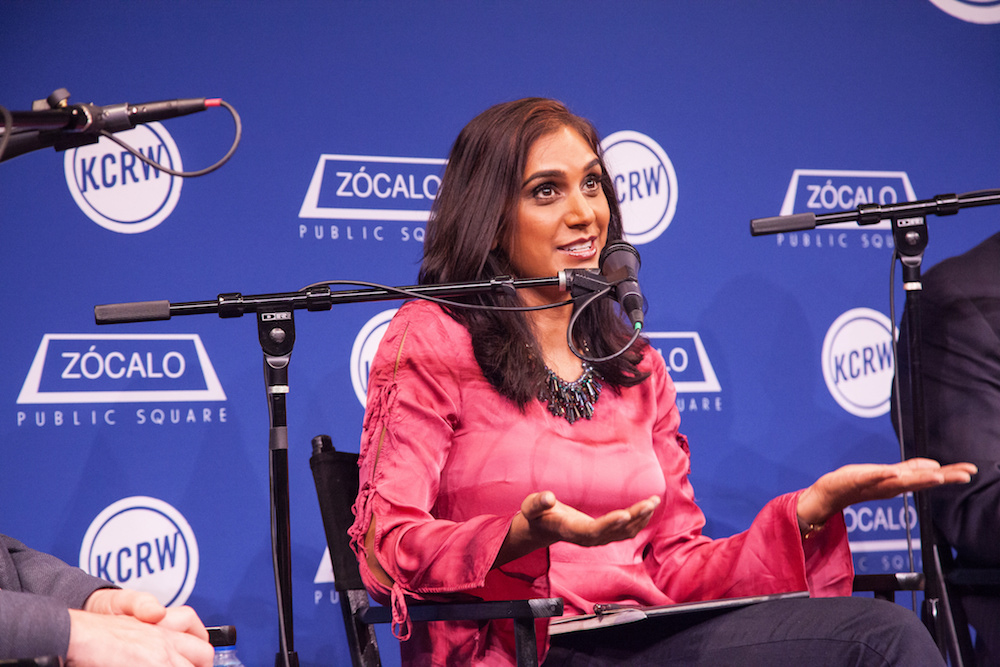 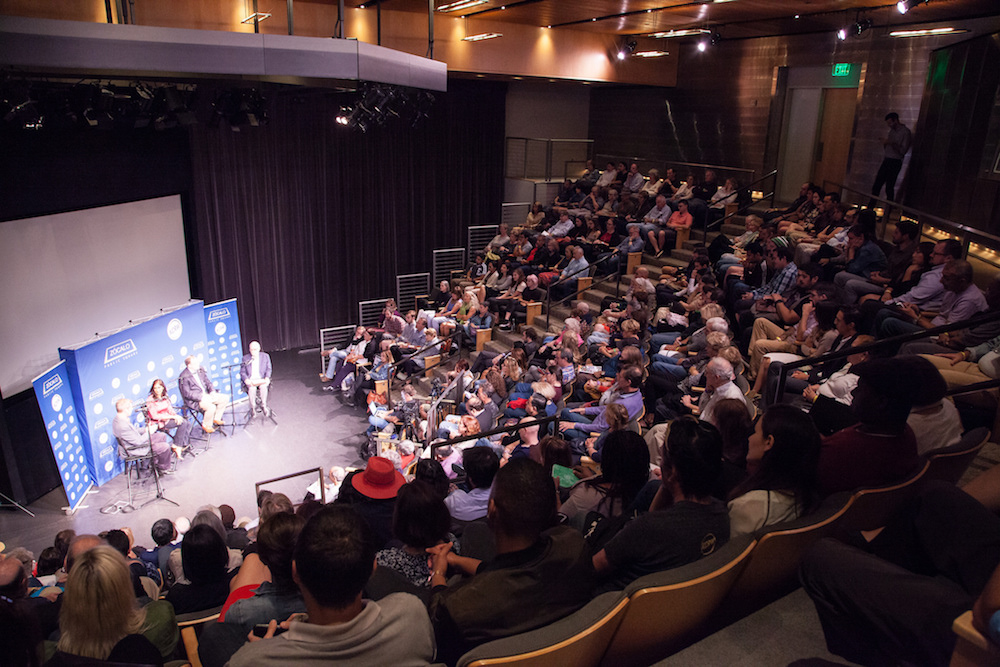 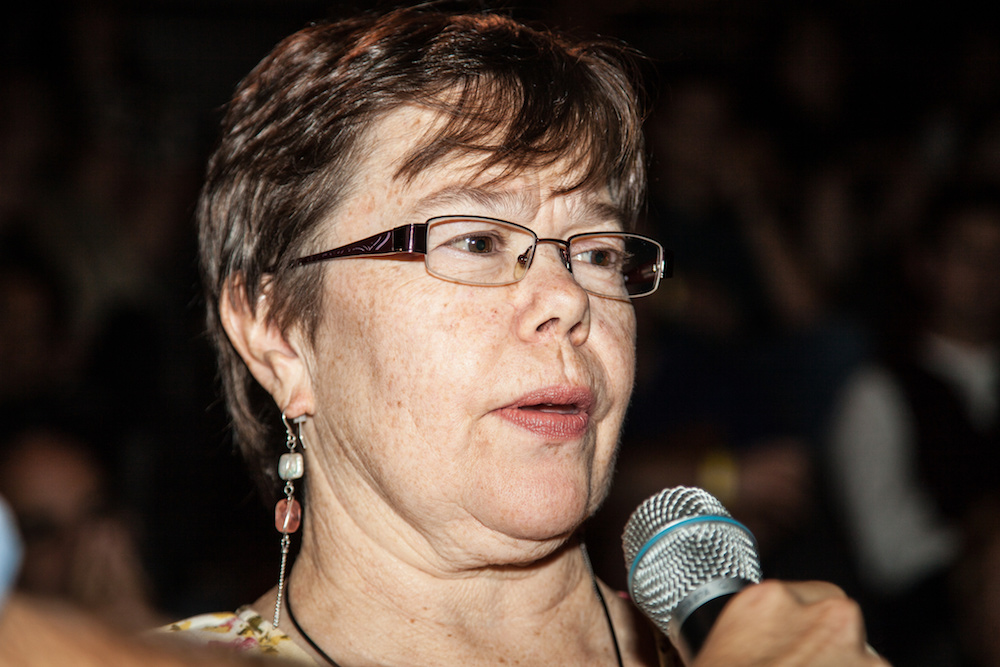 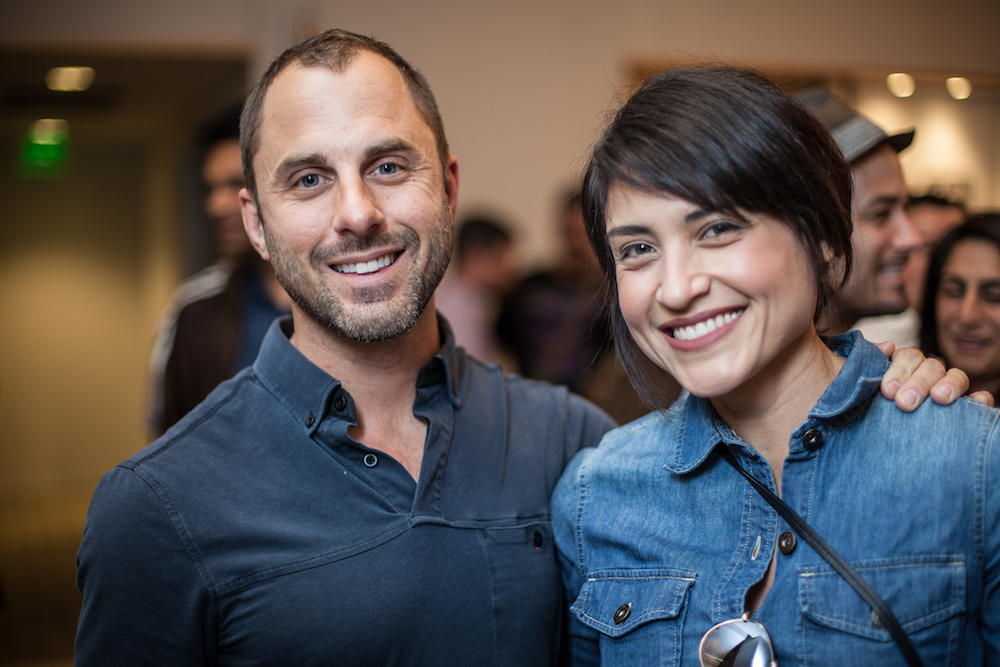 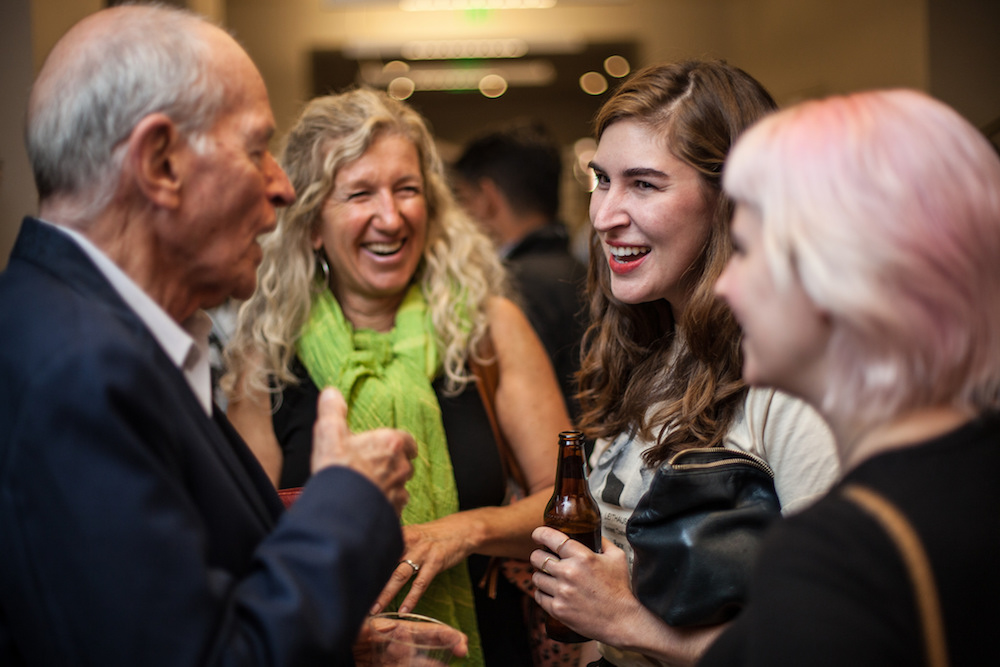 Warren Olney speaks with guests at the reception.