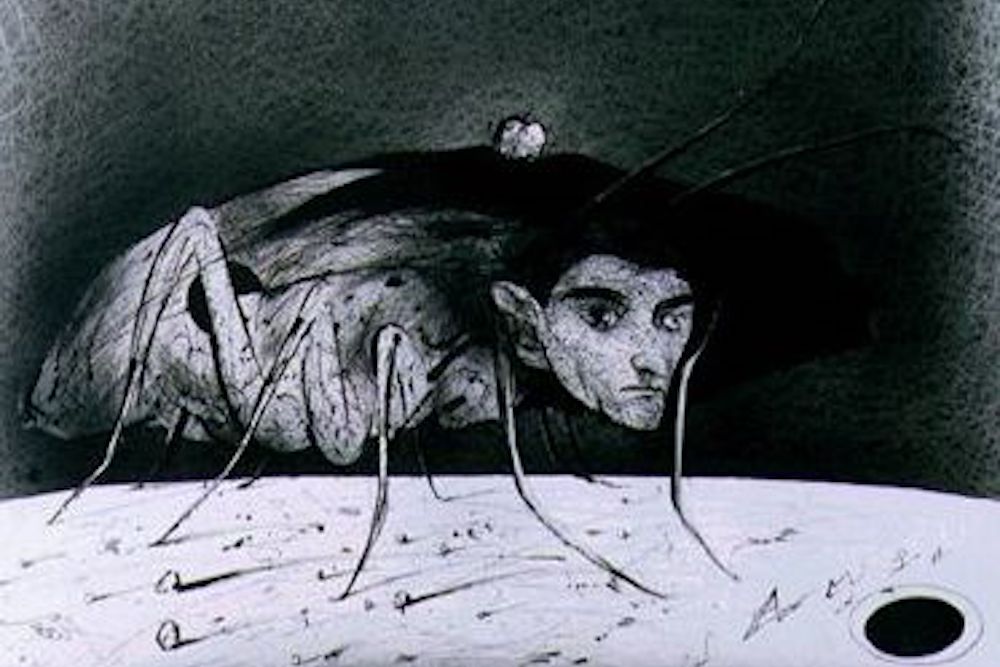 Franz Kafka comes back from the dead in California. Image courtesy of Wikimedia Commons.

You are far too kind: I never imagined a bureaucratic nightmare this cruel, absurd, and surreal.

I don’t know exactly how I got to California, or even how I came back to life. But I appeared here some weeks ago, in the form of an insect, like my protagonist in The Metamorphosis. And I’m glad I did. If I’d known weather like this in my lifetime, I might not have died of tuberculosis in Prague in 1924, shortly before my 41st birthday.

In my prime, I was a master of conveying oppressive and intangible systems that trap humans and defeat attempts at reform. California, and its housing markets, do indeed fit that bill. But I never had any idea that a dystopia could be as beautiful and wealthy as yours.

Indeed, California’s talent for self-deception and absurdity leaves me in awe. You know, I thought I portrayed myopia pretty scarily in The Trial when my character K goes into the dark cathedral and can see only one piece of the painting, leaving its true meaning in pitch black. But I couldn’t have conceived of a fantastically rich place of 40 million people that claims it is open and welcoming to the whole world, while refusing to house people.

You Californians talk a big game about how you support the environment. But by a surreal trick, the laws that supposedly protect the environment also make it so difficult to build housing—especially near your transit hubs—that people are forced to live and work on the periphery, where the environmental costs are actually higher. You have enough land—and the right zoning—to have housing, but you give NIMBYs and lawyers all this power to stop housing and development even where it’s legal.

While I am proud of my ability to create nightmares of labyrinthine illogic, I never managed to dream of anything so diabolical as your California Environmental Quality Act, which you call CEQA. One lawyer, Jennifer Hernandez, who has written about this CEQA with scary flair, put it this way:

Imagine spending five years and $5 million to defend against a lawsuit challenging a plan for where to put transit improvements and other infrastructure, and critically needed housing and related public services—and then to get sued again, and again, and again, and again, for trying to implement the plan…. And then imagine that the reason for this “process” is a handful of construction trade leaders who don’t care a bit that their workers can’t live near their jobs, and can’t afford to buy a home anywhere within 2 hours—along with enviro advocates who define the “environment” as the view outside their kitchen window. And then imagine that the lawsuits can be filed anonymously, at a near zero cost, and without an iota of legal merit [and] can kill a project for 3-5 years by ending access to financing.

That surpasses my most chilling passages!

Californians have forgotten just how fundamental housing is—not merely as shelter from life’s cruelties but as a place that creates space to rest and think. As I once wrote, “It is not necessary that you leave the house. Remain at your table and listen. Do not even listen, only wait. Do not even wait, be wholly still and alone. The world will present itself to you for its unmasking, it can do no other, in ecstasy it will writhe at your feet.”

I portrayed the paradoxical isolation of an overcrowded city in The Trial, which, by the way, starts in a lodging house (the sort of housing your state could use more of). Your state is reminiscent of that, but at a scale—of escalating homelessness and housing prices far beyond the median income—that exceeds my horizons.

And oh, the terrible price you pay! I had some real health problems in my life—not just tuberculosis but migraines, insomnia, constipation, and boils. Modern scholars have concluded I also endured clinical depression and social anxiety. But your housing crisis is making you sicker than I ever was.

Millions of you have moved far from your jobs to find affordable housing that suits your family, but now your commutes are ruining your health. I know about commuting, too—while writing timeless works of literature, I had a day job with insurance companies—but I couldn’t imagine the traffic you endure or the hyper-crowded buses and BART cars you squeeze into.

All these pressures can put households in, well, Kafkaesque predicaments. I know about families—I had a tyrant of a father, and lost my two younger brothers to childhood disease. In my story, “The Judgment,” a father won’t make any room in the world for his son, who at the end hops over the railing of a bridge and plunges to his death.

But younger Californians have it worse: They can’t even have a child. So many of you are delaying marriage and child-rearing because you can’t afford a home that your state’s birthrate just fell to the lowest ever recorded—even lower than during the Great Depression.

I never managed to dream of anything so diabolical as your California Environmental Quality Act, which you call CEQA.

Even those of you who have housing often have to do without very important things—like education—to pay for a roof over your heads. My father didn’t provide me much, but I got sent to good German schools, and got a law degree. You live in a 21st-century world where education is even more important, and yet your education levels are stalled, and not enough of your people can afford college.

Worse still, your schools don’t capture the full value of this huge run-up in housing values because you have limited your property taxes. When I buzzed about this to Californians, they started talking about how you all worship a strange and immortal god named “Prop 13.” And people think my stories are weird!

In this and other ways, your housing crisis has turned your sunny state into a prison I never could have conceived of in gloomy Prague. Now, I did once describe an apartment as a prison in my unfinished novel Amerika. But, by not building enough housing, you’ve created a run-up in prices that traps people in your own homes. Millions of you—perhaps most of you—live in places that you could not afford to buy or rent now if they came on the market. So you can’t move and follow prospects for jobs, education, and love.

And yes, I know that many of our civic and political leaders are proposing ways to address the crisis. But so many of the ideas (Mandatory solar! Higher affordable housing requirements! Rent control!) would only add to the costs of housing. Your local leaders don’t approve housing because politics and financial incentives run against it. And instead of changing the calculus by encouraging them to do the right thing, your state legislators suggest new laws to coerce them.

When listening to those lawmakers, I thought of an old line of mine: “It’s only because of their stupidity that they’re able to be so sure of themselves.”

If you don’t, I fear you Californians will lose your taste for your very sweet land, just as the salesman-turned-insect in The Metamorphosis loses his taste for his former favorites of bread and milk.

I’d suggest that all Californians pick up my final, unfinished, and posthumously published novel The Castle, in which the protagonist K arrives in a village but struggles to get the permission to live there.

I never wrote the ending, but I planned to have the village grant him the right to make his home there only when he was on his deathbed.

California, do you really want to come to an end as Kafkaesque as that?