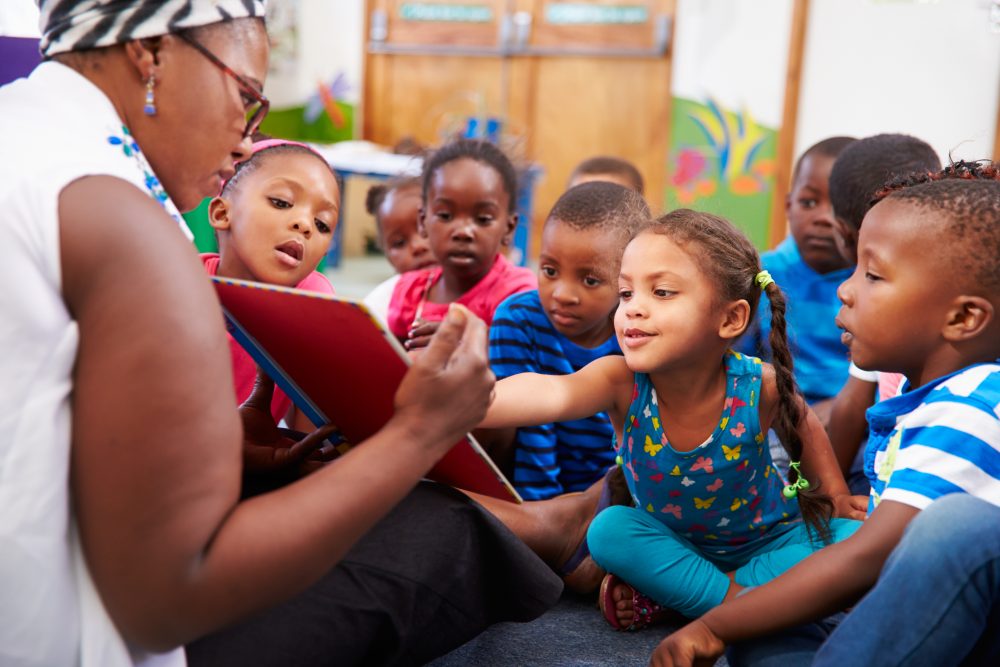 Teacher reading a book with a class of preschool children. Photo courtesy of Shutterstock.

Since the 1990s, California’s leaders have promised to make preschool universal for every child.

Maybe they’ll do it by the time I have grandchildren.

It’s already too late for my own kids. The youngest of my three sons graduated from preschool last week. I celebrated by writing my final preschool check—for monthly tuition of $1,165. With that check, my spending on preschool tuition for all three boys, over the last seven years, totaled more than $120,000.

All that tuition, alongside a 21st-century Southern California mortgage, has wiped away most of my family’s savings. And yet, my kids are extremely lucky because they got to go to preschool at all.

Today, only half of California’s 4-year-olds and 21 percent of our 3-year-olds are enrolled in either a public preschool or Head Start, according to figures from the National Institute for Early Education Research. By comparison, 90 percent of 5-year-old Californians attend a public kindergarten.

That leaves most families to search for their own preschool solution, if they can. Many middle-class families struggle to find anything affordable (preschools often charge tuitions higher than the $14,000 of the University of California) and full-day (to accommodate work schedules). The state’s tax credit for preschool—$516—would cover two weeks at such facilities.

Subsidized preschool programs mostly target low-income kids, but an estimated 170,000 California children who are eligible for publicly funded preschools can’t go because there aren’t enough spots. And only 13 percent of low-income kids are in high-quality preschools, advocates say. In a state with high childhood poverty and inequality, such statistics are unconscionable.

Preschool makes liars of California adults, demonstrating the vast canyon between our progressive rhetoric (“children are the future”) and reactionary reality (“kids don’t vote so why should we care about them?”). Investments in early childhood education are of enormous social value: Kids who get high-quality preschool are less likely to fall behind in school, be victims of crime, or drop out of high school. The RAND Corporation even found that spending on early childhood had a higher rate of economic return than dollars devoted to infrastructure or workforce training.

So it would make a great deal of sense for California to invest in our kids. But the state can’t even match Oklahoma, which established universal preschool in the 1990s. Voters turned down a ballot initiative to establish universal preschool in 2006. Even part-way measures get blocked. In 2015, Gov. Jerry Brown vetoed a bill guaranteeing one year of part-day preschool to every low-income 4-year-old.

This year, California has the billions necessary to make preschool universal, but instead the new state budget throws $16 billion into rainy day reserves. This failure to do the best by young children is barely an issue in an election year in which Californians are debating a tiny gas tax increase that doesn’t do much for infrastructure.

Since the Great Recession, which saw $1 billion in cuts to early childhood programs, preschool has made progress: increases in the number of subsidized preschool slots, improved ratings and quality systems for preschools, and the establishment of transitional kindergarten for 4-year-olds. Some local school districts have added programs, passing local taxes. But all this falls short of a universal system in which preschool is guaranteed, like a grade in school; instead early childhood education is provided through a complicated patchwork of nine programs with different settings, standards, hours, and fees. The closest thing to universal preschool—transitional kindergarten—is limited to students born between September 2 and December 2. State spending per child on early childhood education actually declined last year.

This lack of commitment to preschool undermines quality and staffing. It’s hard to get talented people to devote their careers to early childhood, given the uncertainty. And California relies far more than most states on unlicensed providers.

Preschool makes liars of California adults, demonstrating the vast canyon between our progressive rhetoric (“children are the future”) and reactionary reality (“kids don’t vote so why should we care about them?).

Despite all these challenges, I have hope. And that hope is grounded in four Northern California children—the four kids, all under the age of nine, of our likely next governor, Gavin Newsom.

Newsom talks obsessively about early childhood, which is a good sign. Yes, he’s rich and lives in Marin, but the difficulty of readying small children for the world is one thing that even the glitterati have in common with the rest of us. A few years ago, while I toured a ridiculously expensive and irresponsibly progressive L.A. preschool, one prospective parent, the actor-musician Jack Black, became so frustrated at the school’s absurd child-centeredness (“we never correct the children even when they’re wrong”) that he asked the principal, with full School of Rock exasperation, “Don’t you think kids need a little more structure?”

Newsom proposes, in great detail, to create a robust system of public early childhood services that starts in the womb (with greater prenatal care), emphasizes coaching for parents of very young kids, and includes universal preschool. He calls for integrating the early childhood system with K-12 education and even universities.

This could be just the most elaborate of a generation’s worth of unfulfilled promises, but there are reasons to take him seriously: As mayor of San Francisco, he implemented a “Preschool for All” program, funded by a voter-approved tax. And in putting together a statewide ballot initiative that legalized cannabis in 2016, Newsom directed some marijuana money to early childhood.

Of course, Newsom will have to negotiate with child care providers wary of change, as well as education and health interests who see universal preschool as unwelcome competition for public funds. He should build a broader constituency for preschool by making sure his expansion reaches middle-class families. Middle-class support is why Social Security and Medicare are more popular than targeted programs for the poor.

And he shouldn’t wait. Those early years fly by. In the fall, my youngest will start kindergarten at our local public school. And while I no longer will be paying preschool tuition, I still will be writing checks.

California guarantees only half-day kindergarten, which means that he’ll be in the classroom for just three hours and 25 minutes a day, 8:10 to 11:35 a.m. Since my wife and I work, we’re very relieved that we can keep him at school by enrolling him in a “kindercare” program for the 11:35 a.m. to 3 p.m. stretch, and then an after-school program to cover 3 to 6 p.m.

Those two extra programs will allow us to keep our jobs. They also will cost us $750 a month.