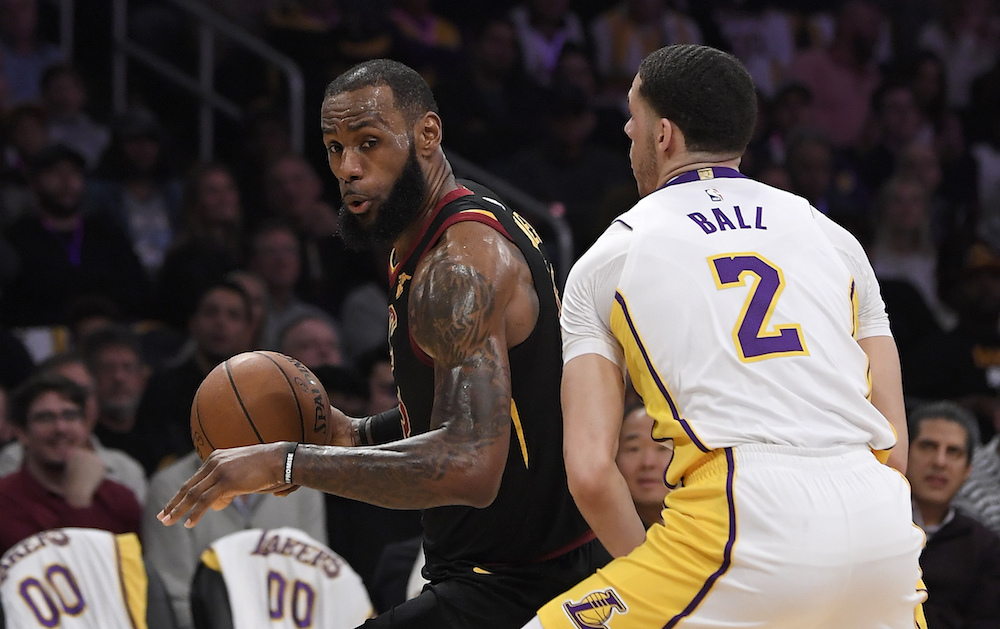 Yes, as a fan, I’m happy to see the world’s greatest basketball player relocate to California and join my favorite team, the Los Angeles Lakers.

But as a Californian, I fear LeBron is the last thing our state needs.

His arrival is a high-profile symptom of one of our state’s big problems: California tends to favor flashy outsiders who are older, proven, and wealthy over our young, homegrown compatriots who haven’t succeeded yet.

Comparing LeBron to his young new teammate, point guard Lonzo Ball, demonstrates the problem—and shows that the stakes for the state go beyond whether the Lakers can deny the Golden State Warriors another championship.

In recent decades, California has been very good at recruiting people like LeBron, who received a $154 million, four-year contract to leave his hometown Cleveland Cavaliers and to revive a losing Lakers squad. A Stanford study shows that, despite its high taxes on the wealthy, the Golden State attracts more millionaires than it loses, since one advantage of being rich is not having to worry too much about taxes or other costs when you’re deciding where to live.

The trend holds even among those who are merely upper-middle-class. People moving to California have more education (the state has seen net gains in graduate degree holders) and income ($110,000 annually or more) than the average Californian. They need the money to afford our expensive housing.

But, at the same time, California has been struggling to develop and retain people like Lonzo Ball, a 20-year-old L.A. native who grew up in the Inland Empire community of Chino Hills. Younger Californians who were born and raised here have struggled to find their footing and have been leaving the state for cheaper places like Arizona, Nevada, and Texas. This is especially true for those who make less than $55,000 a year, don’t have college degrees (like Lonzo, who attended UCLA for just one year before joining the NBA), or want to start families.

Lonzo himself may be on his way out the door; the sports media are reporting that he could be traded in exchange for older and proven players who can help LeBron win now.

This makes sense in 2018, when LeBron is far superior to Lonzo. But in the long term, LeBron’s value to Lakers could be less than Lonzo’s. LeBron, at age 33, is old for a pro basketball star, and he is likely to be injured and in decline, perhaps ready to retire, by the time his new contract expires in 2022. In contrast, if Lonzo realizes his potential, he could help the Lakers win games into the 2030s.

At this point, I’ll leave the basketball debate to the hoops experts. But in the larger context of California’s changing demography, the Lonzos are indisputably more important to our state’s future than the LeBrons.

That’s because so many more of us are Lonzos.

This Lonzo-ization of California represents a sea change. From the Gold Rush until 2010, we were mostly a state of LeBrons—people who had migrated here from some other state or country. As a state, we were very much like the Lakers, traditionally a franchise dependent on free agents from elsewhere, like Kareem Abdul-Jabbar, Wilt Chamberlain, and Shaquille O’Neal. There were great advantages to our free agent past; California didn’t have to develop as many of our own taxpayers by paying for their schooling and health care, because so many of our people just showed up from someplace else.

But in this decade, as immigration levels have fallen, we’ve become a state of Lonzos.

Now, more than 54 percent of Californians were born and raised here. Most of our adults are originally from someplace else. But Lonzo’s rising cohort of millennials is so homegrown—at more than 70 percent—that it will be California’s first homegrown generation.

With this shift, California needs to develop and educate more of its own young people, so that they can replace the immigrant entrepreneurs who have been responsible for starting so many of our innovations and businesses. “Homegrown Californians are the anchor of our economic future,” Dowell Myers, the USC demographer who has detailed the rise of the “homegrown majority,” has said.

In other words, we desperately need our Lonzos to succeed. Too many haven’t. Some are leaving the state. And those who are staying are contributing to our highest-in-the-nation poverty rate. Education levels have stagnated among California’s young—a huge problem since today’s youth will have to be more economically productive to support our aging population.

Yes, the LeBrons of California help subsidize the Lonzos by paying taxes under our progressive system. But the LeBrons also retard the growth of the young. Arriving LeBrons help run up the price of housing—LeBron already has two homes in L.A.—making it harder for Lonzos to buy houses and start families.

The LeBrons of the world tend to be expensive—and less innovative, since younger people are responsible for most inventions. Even more important, California’s Lonzos are far more loyal to the state; they are about three times more likely to stick around California and make their lives. When LeBron tires of his new Hollywood friends Leo DiCaprio and Al Pacino, with whom he recently lunched, he can go back home to Ohio. But Lonzo’s family—including a father who may be sabotaging his career (that’s another story)—is here.

The Lonzos’ loyalty has real value to the Golden State—it will help California retain its labor force as baby boomers retire in greater numbers. Polls also show that the Lonzos are far more supportive of taxing themselves to support public investments than the LeBrons are.

In this context, the Lakers are sending precisely the wrong message to their fans, and to all Californians. So cheer for our superstar import if you’d like. But don’t forget that our future depends on Lonzo.