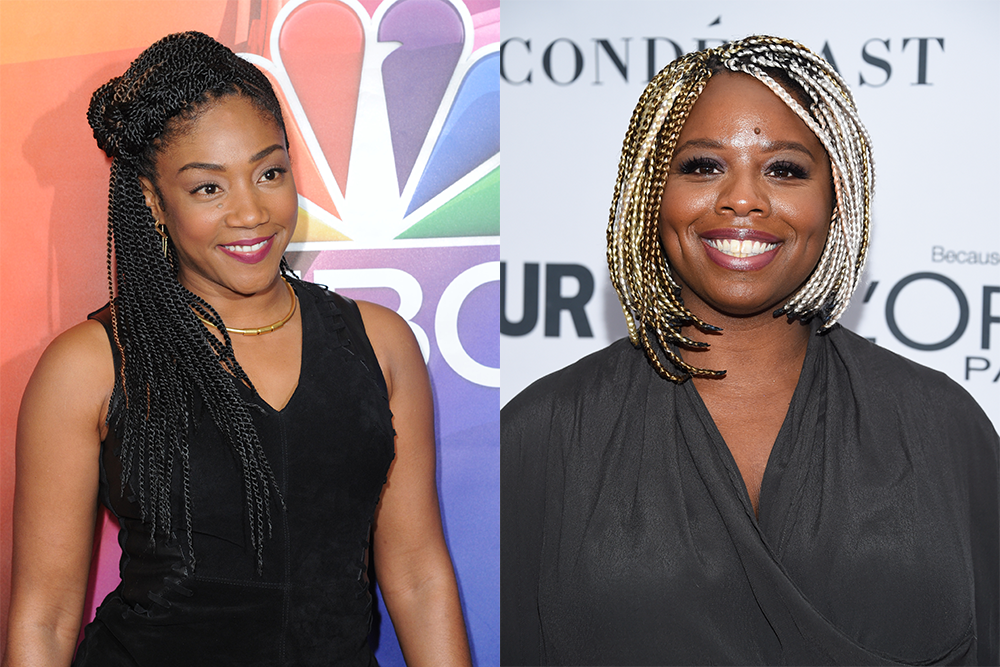 How can Californians rise from horrific local circumstances to national influence?

Two recent books offer one answer: It may help to have grown up amid the racism and institutional failures of Los Angeles in the 1990s.

The two books are both popular and compelling memoirs from African-American women and Southern Californians now in their 30s. But the authors are very different people. One is the Black Lives Matter co-founder Patrisse Khan-Cullors, a deeply serious activist whose memoir, When They Call You a Terrorist, quotes Nelson Mandela and Emma Goldman. The other is the TV and movie star Tiffany Haddish, a profane comedian whose memoir, The Last Black Unicorn, offers an excruciating exegesis of discovering a sex tape of her boyfriend and his mistress—and that the video time stamp is her birthday.

But, in distinct ways, the women show how to turn the pain of Los Angeles into national power. In their telling, the worst of L.A.—its discrimination, neglect, and public agencies so awful that they were taken over by other governments—helped forge strong identities. And the best of L.A.—its diversity—taught them how to speak to the broadest audiences.

Both women learned bitter and useful lessons in the San Fernando Valley. Khan-Cullors recalls growing up in a Section 8 apartment in a poor, mostly Mexican-American corridor of Van Nuys, where takeout restaurants pass for community anchors. “Ours is a neighborhood designed to be transient,” she writes. Haddish was a South L.A. kid, but she rose daily at 5 a.m. to ride a school bus to Woodland Hills.

Both are from families that fell out of the middle class during the deindustrialization and recession of the 1980s and ’90s. Khan-Cullors’s mother is abandoned by her parents when she becomes pregnant as a teenager, and one of Khan-Cullors’s fathers loses his job at the Van Nuys GM plant and never quite rebounds. Haddish’s mother is a postal service manager and property owner who is never the same after suffering major injuries in a freeway accident.

In the Valley, both must reckon with wealthy white people who are unaware of their privilege. Khan-Cullors goes to a Sherman Oaks school, where she makes a friend whose father turns out to be the slumlord who won’t repair her family’s apartment. She is arrested inside her classroom at age 12 (while the school’s white teenage drug dealer goes free). “That was the year I learned that being Black and poor defined me more than being bright and hopeful and ready,” she writes.

Haddish, also attending schools with wealthy whites, decides not to be ignored or insulted, but to emphasize, even with clothing (“poor as f—k chic”) how she’s different. This makes her popular. She also seizes the opportunity, developing a steady business providing dancing and entertainment at bar mitzvahs.

Both women give credit to their Los Angeles Unified public schools. Khan-Cullors recalls how teachers and classmates at Cleveland High introduced her to concepts of social justice. Haddish enjoys the social life at El Camino Real High (she serves as El Conquistador, the school mascot), and a teacher there helps jump-start her academically—to the point that New York University offers her admission (though not enough money for her to attend).

But outside of school, both learn the lesson that L.A. doesn’t really care much about the lives of its kids—especially black, poor ones.

Khan-Cullors watches her friends get harassed and arrested for nothing more than minor acts—tagging, underage drinking, cutting class, talking back, and, in one case, wearing the same T-shirts. She sees how the drug war, the “three strikes” law, and Prop 187 injure friends and acquaintances. And she is particularly angry at how gang injunctions are used to label kids even when they have nothing to do with gangs. “Kids were being sent away simply for being alive in a place where war had been declared against us,” she writes.

The book is particularly powerful—and infuriating—in recounting how Khan-Cullors’s brother, Monte, a schizophrenic, is charged with progressively more serious crimes (“I spent my childhood watching my brother get arrested”), even though he doesn’t physically harm anybody. Monte is beaten, tortured, and drugged in the L.A. County Jail during a time when, subsequent investigations showed, such abuse was a regular practice of the county sheriffs.

Khan-Cullors fights to protect her brother from institutions that treat him as disposable. The line to her eventual activism is clear: Wouldn’t Monte have received the care he needed, rather than abuse and incarceration, if all black lives really mattered?

In Haddish’s memoir, it is the author herself who suffers the abuse. This fact—and Haddish’s comedic instinct to make herself, not others, the butt of jokes—gives her funny book unexpected pathos. She is beaten by her mother, as well as in the foster care system, in which she spends her teens. She describes the indignity of having to beg a judge—since she had no official parent and was a ward of the state—to seize an early opportunity to appear on television.

“It didn’t feel like anybody gave two f^*ks about me, unless it was benefiting them. Unless they was getting paid,” she says, recalling that her grandmother insisted on being compensated for a stint as her foster mother. “Me just being myself was never good enough for anyone to love me.” She falls into difficult relationships with men—some of them cops to whom she is drawn because of the illusion that they provide safety. “I end up picking jealous and possessive guys, because in some sick, twisted way, I think that means they care,” she writes.

You can’t negotiate or compromise with people or places that discriminate against you.

In the face of awful realities, both women conclude they have little choice but to assert themselves. Khan-Cullors builds a commune of activists and artists, defying police raids. She helps organize the first Black Lives Matter march, strategically held in Beverly Hills, to gain broad notice. She finds that having had to navigate the many different peoples of L.A. allows her to build diverse alliances—and to make Black Lives Matter a truly democratic organization. Perhaps it’s easier to be intersectional if you’re from a city with so many intersections.

“We have built a decentralized movement that encourages and supports local leaders to name and claim the work that is needed in order to make their communities more just,” she writes, noting that her own name remains little-known. “This is monumentally difficult in a world that has made even activism a celebrity pursuit.”

Haddish has to fight racism and sexism as she breaks into comedy, with only a day job at an LAX ticket counter for support at first. She is cheated and propositioned by producers. But she is lucky in that her unlucky childhood has made her fierce and uncompromising. In 2017, she breaks out in the film Girls Trip, and by this spring, she was a presenter at the Oscars. Toward the end, Jada Pinkett Smith, alongside her husband Will Smith, hilariously enters the narrative playing Henry Higgins to Haddish’s Eliza Doolittle, who needs to be cleaned up so she isn’t “too street” for stardom.

Ultimately, both books make the same timely point: You can’t negotiate or compromise with people or places that discriminate against you. The best you can do is confront that discrimination—and use that experience to build your voice.

As it happens, that is also a strong point in the USC sociologist Manuel Pastor’s new State of Resistance, the best book so far about California in the age of Trump. Pastor argues that the story of California of the past 20 years is how younger Californians, many of them immigrants and minorities, got tired of being victimized. After realizing that complaining doesn’t work, they built institutions and alliances (Black Lives Matter among them) that have protected immigrants and other at-risk people—and took over state politics in the process.

Black Lives Matter and its allies are often criticized as advancing “identity politics.” That’s backward. Khan-Cullors and Haddish each show how forging a strong identity—even through suffering—can allow you to advocate for universal values. The power is in the pain.

“That’s why my comedy so often comes from pain,” Haddish writes. “In my life, and I hope in yours, I want us to grow roses out of the poop.”