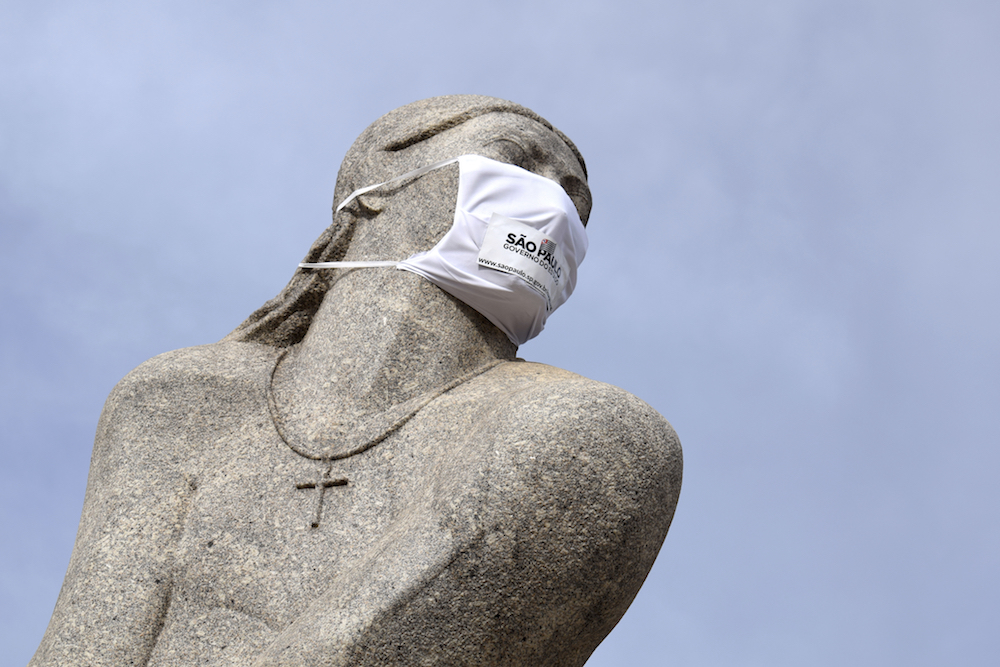 I’ve been training myself to be productive at home since I finished high school. The very idea of becoming a writer came from an interview with Patricia Highsmith that I read in the 1990s; the journalist described her life in a beautiful house near the mountains in Switzerland. Still a teenager, I thought this was the kind of life I wanted. Not necessarily Switzerland, I thought. A small apartment in the city could also satisfy my dreams of quietude, if I were able to work at home.

But my teenage dreams have now come true in a time when I cannot enjoy them without guilt. It started in the last days of February, just after Carnival—our most famous festivity—when the National Department of Health confirmed the first case of coronavirus infection in the country. Twenty days later, all schools and stores were closed to prevent the spread of the disease. TV drama production and all cultural events were suspended because of this disease that spreads fast and could kill up to 200 thousand people by August here in Brazil.

Since then, I’ve been teaching my college classes online. I’ve managed to keep my job, which I find surprising, because the other industries I’ve worked in have all suffered recent disasters, leaving my friends out of work. For many years I had worked as a screenwriter, but I gave it up for an old dream of dedicating myself to the low-paid profession of novel writing. So I started to work part time as a college instructor, saving some free hours in the afternoon to write. Teaching proved to be a wise choice last year, when a far-right president, Jair Bolsonaro, assumed office and suspended federal funding for films. Film festivals, new productions and even films in post-production were paralyzed in the president’s “culture war.”

Things were no better for the book industry. Publishers and bookstores were in deep financial crisis due to five years of poor national economic conditions. Even children’s books became targets in the trophy hunting of a president who declared school textbooks have “too much writing on them.” He chose an education minister“ready for battle” to “clean up” textbooks of the “filth” they see, for example, in the picture of a healthy and happy kid with LGBT parents. We were sure these problems were unbearable enough.

No one expected things to get even worse.

Just a week into quarantine it was clearer than ever that my steady job was a privilege. Newspapers reported that 13 million people lost their income overnight and didn’t have savings that would cover more than a week of food. In Brazil 40 million people work in the gray economy. I used to see some of them selling corn, pizza, beer, and brigadeiros (local chocolate sweets) on the sidewalk right in front of my college, at the end of the day. With the students at home and no one on the sidewalks, all these people lost their already meager earnings.

I also know my assured monthly salary won’t last long. College tuition is already too expensive for many families and students. With unemployment rising, many of them will quit studying. Almost every day, my department head sends emails asking teachers to be extra dedicated, sympathetic, and charming to avoid student dropout. We had to come up with homework they could do at home with their cellphone cameras. Acting teachers perform alone in front of the computer to show how well or badly a scene can be done. We cannot ask for too much work from students, otherwise they will get stressed. We cannot take attendance, because it would be unfair to students with internet connection problems. But as hard as we tried, two or three students dropped out every week—in a department with only 150 of them to begin with.

Worrying too much about tomorrow is of no help. For today I have a job, so the best I can do is to sit down and work. In the first week of the quarantine I was a bit nervous about handling a whole class of 30 students in an online platform. It turned out to be much easier than I expected. Screenwriting programs are about exchanging ideas, and that works online. I talk for 60 minutes, show my notes on slides, and ask them to watch short films and selected episodes of national web series. That’s how I try to prepare them to work in the entertainment industry that I quit.

My desk is in the TV room, the same room where my partner and I read, write and watch our favorite films and series. We both have indoor personalities. We both love to stay home and do exactly what I am doing in this quarantine. But I keep this contentment to myself, because I don’t want to sound like the fitness influencer who posted a video of her party, shouting “Screw life!” My comfort now comes with guilt.

Meanwhile, I am moved by the stories about poor neighborhoods that I read in online newspapers. A father buys hand sanitizer for his kids and is left with no money to eat. A mother works as a cleaner for a doctor and keeps going to work on a bus full of people; her employer won’t pay her if she doesn’t work.

I gave up the fantasy novel and started a short story about a woman during the quarantine. She finds the courage to confess an old secret love for her closest friend. Declaring our deepest feelings is what matters for me now.

Unemployment is a sensitive matter for me. The shadows of poverty still hover over my family, which reached the middle class not that long ago. My mother and father were the first generation in their families to finish high school. When I was a teenager, my mother made bread at home and sewed our sweaters herself to save money to pay for our English classes. The year I graduated from university, my father lost his job and could never find proper work again.

If not for my partner, Dani, maybe I wouldn’t even think about why all of this is happening. While the quarantine has secluded me, she works for a large university hospital that offers free, high-quality healthcare for everyone who needs it.

As a psychiatrist in the mental health institute, Dani is not on the front lines of the COVID-19 crisis. Appointments with regular patients have been suspended, but emergency cases still show up. In the first weeks, psychiatry patients suspected of COVID-19 infection were transferred to the “covidario,” a unit prepared for the illness. Now this unit has reached full capacity, so the mental health institute have to admit its own suspected cases. But short supplies and bureaucracy make it hard for psychiatrists to get protective wear—even though we live in the most prepared state to handle the outbreak. Some of Dani’s colleagues have become infected. “Doctors feel the anguish of knowing the danger, even when they can do nothing to prevent it,” she told me.

Dani comes home every evening with news from the hospital. I feel myself changing, as the world changes dramatically outside my apartment. I read with great sadness that many artists I admire are dead now from COVID-19: Naomi Munakata (64), Daniel Azulay (72), Rico Medeiros, Aldir Blanc (73), Abraham Palatnik (92), Sérgio Sant’Anna (78). Journalists warn us that young people can also have severe symptoms, but the unexpected death of old people strikes me more. It is terrifying to realize that our elected president is insensitive to all this danger and pain. He makes things worse by inciting people to “go back to normal” and forcing doctors to use some medicine that does not help and could even be harmful. He stated before the election that he had no sympathy for gays, women, black, and poor people. Now it is clear that he does not even care for old and sick people. Arnaldo Lichtenstein, technical director of the hospital where Dani works, declared in a live news broadcast that this cruel reasoning has a name: eugenics.

For Bolsonaro, “the rain is there” and “some people will drown.” He says families should put their “grandpas and grandmas in a corner of the house.” How do we react to that?

My mother is 72 now. My father is 76. My stepfather is 81. They all live in the city of Curitiba, where I was born, 250 miles south of where I live now. They are all healthy, smart, and funny as always. We talk on the phone every week, and from their voices I hardly notice they are getting older. In my mind they are still 50, and I easily forget that I am nearly 50 now myself.

When the quarantine began, in the third week of March, my mother was part of a group touring Brazil’s southern wine routes. She sent a photograph of herself and my stepfather smiling behind a fountain of red wine in Bento Gonçalves, Brazil’s “wine capital.” They were having dinners in large hotel restaurants with 200 or so other retired travelers.

I was suddenly worried. She had to come back and protect herself.

Dani’s parents live nearby, so she meets them every Saturday, at safe distance, when she brings them groceries. She is attentive to any sign of bad health: a hoarse voice, a complaint of fatigue. Since we’ve been together, I have become aware that parents may hide minor symptoms of weakness because they don’t want their children to worry. They don’t want to waste our time together talking about suspicions of diseases. It is we, the adult children, who must stay aware and offer help before being asked.

In my late 20s, I watched the serious illnesses of my grandparents in their last years. I saw how my mother and father were worried and stressed. Still absorbed by my youthful fantasies, I thought my parents were overreacting. Losing health and lucidity in your 80s is nothing but normal, I told myself. We should just accept that life will end someday.

Today I’m old enough to know how wrong I was then. I want my mom and dad alive and happy for our weekly phone calls and our holiday reunions, for as long as possible. I don’t even want to think that it could end someday, and the possibility that a sudden disease could take them away terrifies me.

The fear invades my silent and peaceful landscape. Inside the apartment, one day after another, I see the quiet city from my window. The air is cleaner and the sunsets are beautiful. The irony is that I was just beginning to write a fantasy novel about a future when the human population was drastically reduced. I have spent most of my adult life creating strategies to stay at home alone, with my books and my ideas—ideas such as a wish-fulfillment story of a more empty world.

Now there’s no need to fantasize. I gave up the fantasy novel and started a short story about a woman during the quarantine. She finds the courage to confess an old secret love for her closest friend. Declaring our deepest feelings is what matters for me now.

In a good story, the hero often goes after his goal only to find out he was wrong from the very beginning. That’s how I feel. I hope for my partner to come home by the end of the day. I call my parents to hear their voices. And I wonder what Patricia Highsmith would say about these days, if she were still there, in her stone house in Switzerland.