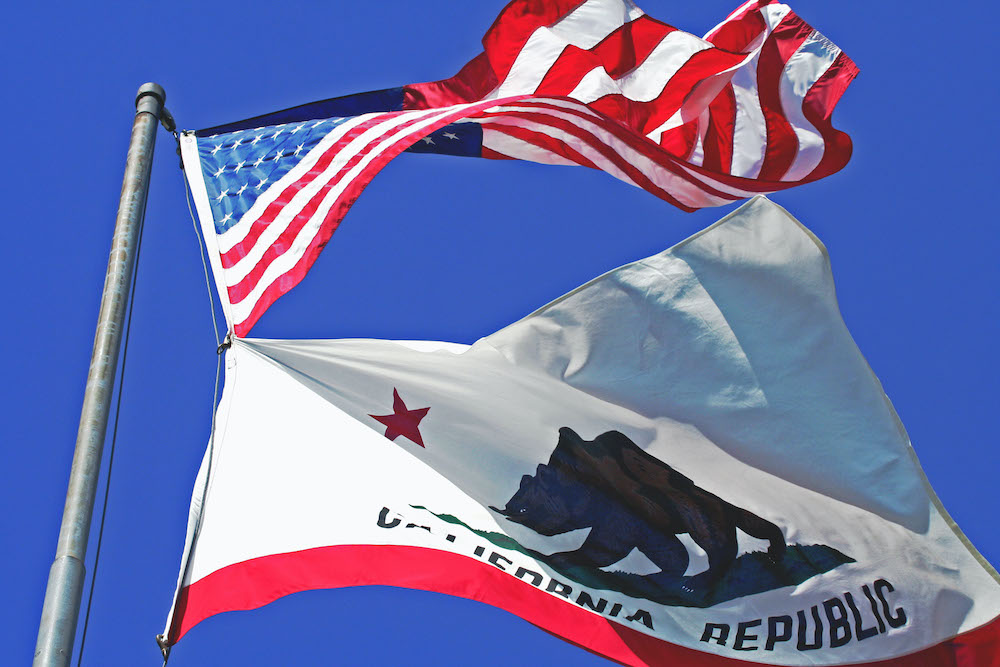 Do you trust your state more than the U.S. government? Do you dream of California independence? Does breaking the U.S. into regional republics intrigue you?

Then you might be a true patriot in the greatest American tradition.

Or do you cling to the hope of national unity? Do you believe that we must compromise to preserve our sprawling union of 330 million?

The frightening 2020 election is already disrupting how we think about America and California’s place in it—and thank goodness for that. Perhaps now, Americans might come to see national unity as a dangerous and destructive pursuit, and to recognize that embracing our divisions may provide the best hope for protecting our rights and building a better future.

This powerful argument fuels two smart new books. One is a revisionist American history, Break It Up: Secession, Division, and the Secret History of America’s Imperfect Union by The Nation contributing writer Richard Kreitner. The other is a deep, California-inspired analysis of the present and future, Citizenship Reimagined: A New Framework for States’ Rights in the United States, by Arizona State University political scientist Allan Colbern and UC Riverside Center for Social Innovation director S. Karthick Ramakrishnan.

The two books share a crucial insight: that the federal government has never been a reliable protector of Americans and their rights. So progress and protection often result not from unity, but from different parts of the country going their own way. From fighting slavery to advancing women’s suffrage, from same-sex marriage to marijuana legalization, states have often led the way in extending our rights, often in the face of fierce federal opposition.

When Americans unify and govern themselves through national compromise, on the other hand, we have done awful things together—adopting a Constitution that enshrined slavery and shunned democracy, ending Reconstruction and launching Jim Crow, incarcerating minorities, granting ever-greater powers to presidents, and pursuing endless wars.

The good news is that we Americans—“an Obstinate and Ungovernable People, Utterly Unacquainted with the Nature of Subordination,” in the words of a British officer quoted by Kreitner—aren’t often cursed with national unity. Division, disunion, and cold civil war are our natural states, as befits a country that venerates its founding divorce filing, the Declaration of Independence.

“Secession is the only kind of revolution we Americans have ever known and the only kind we’re ever likely to see,” Kreitner writes.

Perhaps now, Americans might come to see national unity as a dangerous and destructive pursuit, and to recognize that embracing our divisions may provide the best hope for protecting our rights and building a better future.

Kreitner shows how breaking up the country—an idea typically associated only with the Civil War—has been sought by every region, across every American era, and even considered by major figures like Jefferson and Madison. He offers wonderful tidbits, from President Zachary Taylor’s 1849 opinion that California would be better off as an independent entity to the American diplomat George F. Kennan’s 1993 argument that the U.S. had become “a monster country” that should be divided into a dozen different republics. Our devotion to disunion is so great that, if you haven’t thought of splitting up the country, you probably don’t belong here.

“Paradoxically,” Kreitner writes, “disunion has been one of our only truly national ideas.”

From the Civil War to the civil rights movement, division and conflict have inspired Americans to make big changes. “Disunion startles a man to thought,” said the 19th-century abolitionist William Lloyd Garrison, who argued that the North should leave a Union fatally compromised by slavery. “[Disunion] takes a lazy abolitionist by the throat, and thunders in his ear, ‘Thou are the slaveholder!’”

How to use division in pursuit of a better America is the focus of Colbern and Ramakrishnan’s book, Citizenship Reimagined. These two scholars argue that, to counter toxic federal regimes and expand the rights and powers of regular people, states should exercise powers that we typically think of as federal.

They call this approach “progressive state citizenship” and say that the California of the past decade is a model. In particular, they point to a series of bills signed by Gov. Jerry Brown that expanded immigrant rights. These laws granted undocumented Californians the rights to work, drive, and access public services, while also defending law-abiding immigrants from federal overreach.

In this way, California is a turnaround story—in previous decades, the state practiced “regressive state citizenship,” eroding rights for immigrants and racial and ethnic minorities. For that reason, they caution that the nation needs robust enforcement of the 14th Amendment to ensure a “federal floor” of rights through which states can’t fall.

“Progressive state governments can provide rights and protections to citizens and noncitizens that exceed the federal floor, temporarily anchoring the country to progressive values and ideals during times of restrictive national regimes,” Colbern and Ramakrishnan write.

The pandemic, with the federal government’s failure forcing states to take on health and safety duties, may accelerate the trend of state leadership going forward, the authors suggest.

Since division is so powerful and productive in the United States, it’s quite possible that whatever conflict follows our current election may be far more consequential than the vote tallies themselves. After all, both campaigns prize unity, albeit in very different ways. President Trump explicitly urges authoritarian, anti-democratic, and violent measures to unify America by force, no matter the costs. And Joe Biden’s emphasis on bipartisan unity, and his desire to avoid bolder policies that might divide his broad coalition, explain why his candidacy feels hollow, even to many Americans who support him.

What the country needs is not another compromise that preserves false unity, but an honest reckoning with the costs and benefits of keeping the national marriage together. This means that everything—from a new constitution to the honorable and traditional American idea of independence and secession—should go on the table. Breaking up the country might even prove the least divisive way to make American life more just.

“If the day should ever come … when the affections of the people of these states shall be alienated from each other; when the fraternal spirit shall give away to cold indifference, or collisions of interest shall fester into hatred,” John Quincy Adams said in 1839, as quoted by Kreitner, “far better will it be for the people of the disunited states, to part in friendship from each other, than to be held together by constraint.”