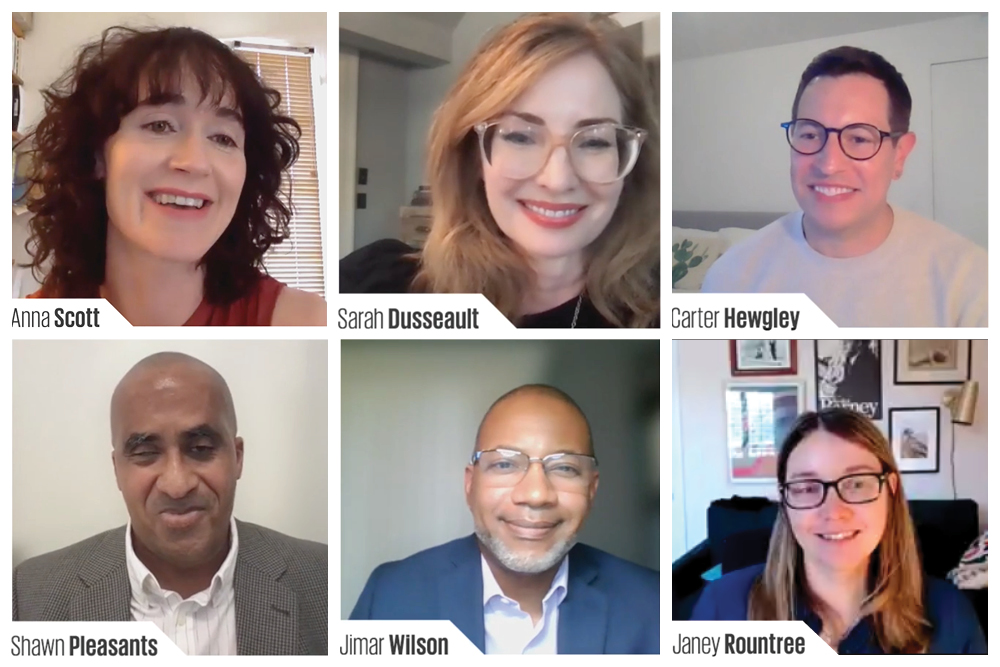 Panelists discuss "What Will It Take to End Homelessness in L.A.?" at Zócalo Public Square.

Homelessness is the biggest crisis Los Angeles faces today—one that’s only expanded in urgency with the COVID-19 pandemic.

In search of solutions to the problem and its root causes, Zócalo, United Way, and the Committee for Greater Los Angeles convened policy makers, advocates, and experts to ask “What Will It Take to End Homelessness in L.A.?”

“It’s a complex narrative, but so is life,” said Pleasants. “It’s something I didn’t imagine could possibly happen to me.”

A graduate of Yale University who had worked on Wall Street, he ended up unhoused after his mother died and his business failed. Living on the street, he dealt with addiction and had to find food, water, and basic resources, such as the bathroom, each day, as well as a safe place to stay. “It’s a very exhausting existence to have,” he said, “one that keeps you from looking forward or have any hope.” Multiple attempts to get housed failed for various reasons—including a caseworker’s arrest for fraud. “The promise of me finding a way out, working with a particular caseworker or an agency, and suddenly be dropped into nothingness, it’s very disappointing and it’s very disruptive,” he said.

Ultimately, it was one of his Yale classmates, Kim Hershman, who was able to provide Pleasants with the support he needed. Today, he said, he has been housed for one year, is 584 days sober, and is working to help others conquer the issues he faced.

“What would have been more helpful to you from professionals that you did interact with up to that point?” Scott asked.

First, said Pleasants, Hershman asked him what he needed. And second, he emphasized, she came to see him regularly and they formed a relationship based on trust, which made him decide to ultimately accept her offer of help.

Dusseault, whose brother is unhoused, said she is working “on making sure lived expertise is at the forefront of both design and execution. … It is real easy to design a program that on paper looks amazing,” she continued, “but if we don’t have that real-life experience at the forefront in the design process, it can easily not be as effective as it could be.”

Scott asked the rest of the panel what holes they see in the system for people who need mental health and addiction treatment services.

UCLA California Policy Lab executive director Janey Rountree said that her team looked at everyone enrolled in street outreach services for a year, and then linked that data to clinical mental health diagnoses and substance use disorder diagnoses. They found that 30 percent of street outreach participants have either a serious mental illness or a substance use disorder and about 10 percent have both.

“If you’re really meeting people where they are, you’re going to hear about a lot of different kinds of needs, and for that outreach to be credible, you’ve got to follow through,” said Rountree. The challenge to such follow-through is that street outreach workers “don’t have the full spectrum of resources that are needed,” the most pressing of which regards the housing gap.

Fifty years ago, Rountree said, California stopped building housing to keep pace with population growth; as a result, housing costs skyrocketed while the average income has stagnated. “When you get to spending more than 30 percent of a person’s income on housing, you can expect to see homelessness in your community, and in Los Angeles we’re over 50 percent,” said Rountree.

“We need to raise the bar,” Pleasants said. “[Caseworkers] shouldn’t be able to take on another person until they have solved the problems of the people that they have in under their care,” he added. “It’s not just passing them on to another worker with another agency. There’s a myriad of different fragmented systems that are very siloed.”

The goal, he said, should be to get people off the street as quickly as possible, and there needs to be clearer pathways to do that. “If a veteran has a problem, they go to the Veterans [Affairs]; they know what to do,” he said. “Well, if someone’s homeless, what do you do? And nobody seems to know.”

“When you get to spending more than 30 percent of a person’s income on housing, you can expect to see homelessness in your community, and in Los Angeles we’re over 50 percent,” said UCLA California Policy Lab executive director Janey Rountree.

Wilson said a multitude of solutions are needed to solve the gap between wages and housing prices. “There is no one solution, but high cost, and barriers to that gap of what people need to stay in housing is something that we need to address,” he said.

Innovative ideas to solve these problems are out there, Dusseault pointed out. But the issue is scale. Los Angeles County, she said, is currently short half a million affordable rental homes. “We just need to put up a whiteboard and figure out a plan to get there,” she said. One hopeful example she cited was the Vignes Street housing project, which was built in less than six months and will provide 232 units of permanent and interim housing at a cost of about $200,000 per bed.

Pleasants added that there is a lot of untapped potential in the city—citing, for example, the many units in receivership without tenants. “I’m sure those landlords who own those buildings would love to have the city put someone in at any cost to keep them afloat,” he said.

The issue is enacting policy. Frustrated at recommendations LAHSA has made but cannot execute, Pleasants continued, “We need to find a way to get all of this wonderful thought and all this wonderful potential here into actual action.”

“We’ve got to get focused and organized on a shared goal, and drive progress across all of our power structures, toward the same common agenda,” said Hewgley. “I don’t know that we’re ever going to live in a Los Angeles where one entity has the authority to end poverty and reverse the housing crisis, but I am eager to get to a point where … the best of those ideas to rise to the top and resolve them.”

What about change now, asked Scott: “Are there just basic concrete things that the city and the county could do to work better together?”

Hewgley said the region’s COVID-19 response made him optimistic. “A crisis like a pandemic reminds you that you can coordinate. You know you can bring it together and have a unified vision,” he said. “We need to treat homelessness the same way.” Our societal failures, he said, whether it’s healthcare, housing, or systemic racism, “all comes and manifests in homelessness, and so I think we’ve got to have that kind of unified effort that we had during the pandemic … on getting people safely inside and getting them housed.”

Tackling homelessness will require systemic change, the panelists agreed. “One of the things we’ve got to acknowledge at the federal level is that housing is a human right. Healthcare is a human right. And we’ve got to start putting our money where our rights are. And delivering those rights at scale is something that I think the whole country would benefit from,” said Hewgley. “Too many people have been waiting too long who deserve nothing less than that.”

Turing to audience questions flooding into the virtual chat room, Scott asked the panelists to discuss what they think is holding Los Angeles back from adopting a right to housing, and how helpful it would be to have such a right.

“I absolutely believe in a right to housing, and I think that concept of housing as infrastructure has been part of what has been holding us back,” said Dusseault. “There needs to be a real understanding of how we got here in order to get out of this, and the real understanding is that we’ve had tons of federal subsidies for all sorts of things—for mortgages for homeowners and other things that the federal government’s subsidized—but we have completely starved our public housing, and that has had a real impact. We’ve starved our access to mental health care and our access to basic health care.”

Following up on that question, Scott asked the panelists: Are there any other cities that have successfully made a big dent in this issue?

Hewgley argued that L.A., in fact, is where we should turn for answers. “We are probably doing some of the most innovative stuff in the country,” he said. “We’re just not doing it at scale.” Instead, he said, it’s a pilot project in a single district. For example, he noted, there are several pilot projects happening right now where social workers trained in de-escalation and connecting people to services are responding to crises instead of armed police. But the problem is providing the resources to scale up such programs. “We probably have the best examples of great practices here in this jurisdiction,” he said. “[But] our bold ideas are not always matched with bold money and bold scale.”

Another audience member had a question for Pleasants about street outreach: What should the approach be if an unhoused person refuses care or services?

A case worker, said Pleasants, is walking into someone’s life at a random moment. “They may have just gotten robbed, they may not have eaten for a while,” he said. “You really don’t know what issues they are going through, and unless someone takes a trauma-informed approach, you’re not going make headway.”

Sometimes, it’s a matter of coming back at a better time. “You’ve got to build trust, you have to build a relationship,” he said.

A final questioner wanted to know if homelessness is something that L.A. can manage, or even end.

“I think we’re in an extremely unique moment where we already have the federal government’s interest,” said Dusseault. “The federal government made some huge mistakes in the Great Depression. We made some huge mistakes in the Great Recession, where the drive for recovery was inequitable and created some of the mistakes that are ending up in homelessness now.” Governance reform and maximizing the impact of that federal help are key right now, she added.

“As we’ve talked about today, we’ve seen what we can do in our response to COVID-19. Within a matter of months, we housed thousands and thousands of people,” said Dusseault. That took collective action across sectors. “I really do think we can do this, but it’s going to take a completely different approach.” 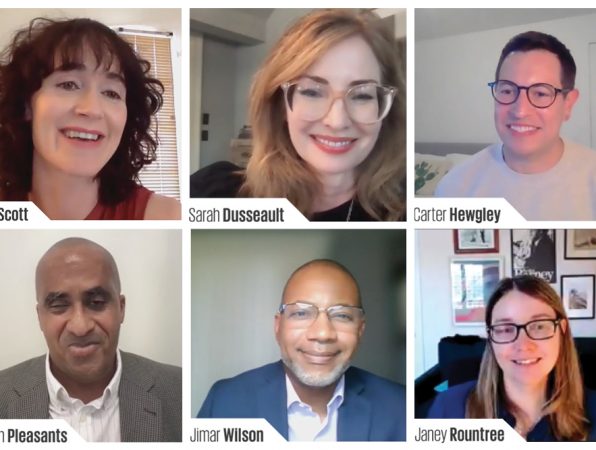