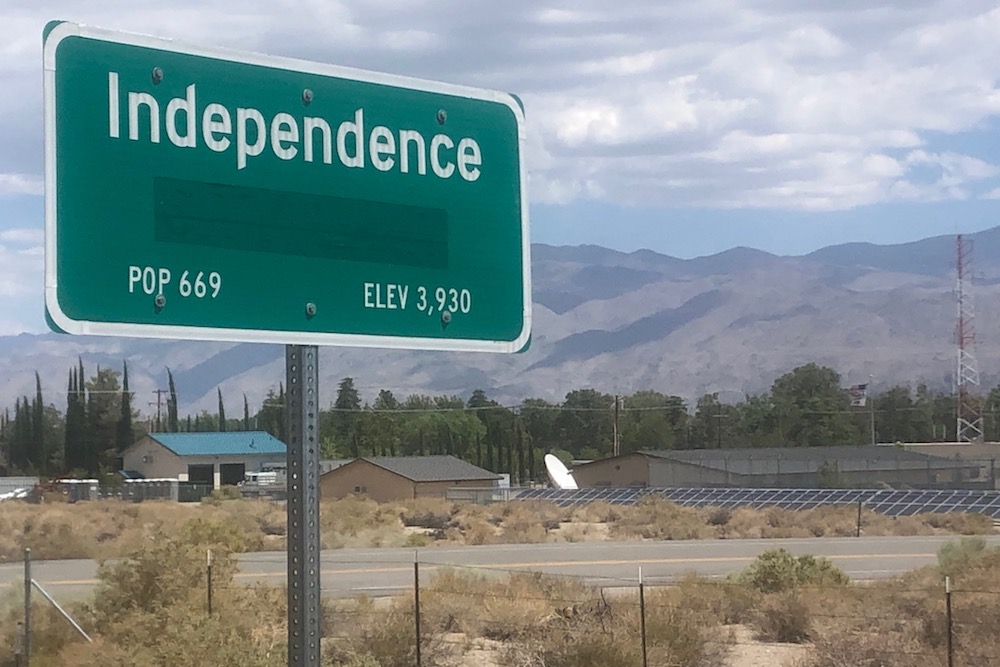 "There is very little that’s independent about Independence," Joe Mathews writes—"Or about us." Courtesy of the author.

Why do Californians celebrate Independence Day when we’ve given up on our independence?

That question occurred to me on a recent visit to Independence, California, a settlement of 600 people on U.S. 395, south of Bishop and north of Lone Pine in the windswept Owens Valley.

Spending the day on the streets of Independence, in the shadows of Mt. Williamson and other Eastern Sierra peaks, got me thinking about how much we talk about independence, and how little we cherish independence as a value.

While Independence is the sort of rural, out-of-the-way place that in the American and Californian imagination should embody our ideals of independence, there is very little that’s independent about Independence. Or about us.

There also isn’t much business. When I visited, local cafes were closed, and the hotel-restaurant across the street from the courthouse was for sale. When I asked what was new in town, I kept getting the same answer: The Subway sandwich shop next to a gas station had been replaced by a smaller, Nevada-based chain, Port of Subs.

Independence is the seat of Inyo County, which helps keep the place alive. The county is a vital employer—between the county courthouse, the county administration, and the county jail on the south edge of town. Like so many rural communities, Independence is also dependent to a great degree on the federal and state governments. The feds manage or own more than one-third of the land in the area, via the Bureau of Land Management, the Bureau of Indian Affairs, the National Forest Service, and the National Park Service. The state of California controls another 15 percent of the land. Independence depends very much on the protection of Cal Fire, with a summer of wildfires already underway.

While Independence is the sort of rural, out-of-the-way place that in the American and Californian imagination should embody our ideals of independence, there is very little that’s independent about Independence. Or about us.

But the biggest outside landowner in the area, with nearly half of the managed land, is the L.A. Department of Water and Power. L.A., in an unforgettable act of deception and treachery, bought up much of the Owens Valley to obtain water for the city in the early 20th century. Today, LADWP manages state-owned lands to control for dust in the Owens Lake, now mostly dry since L.A. took much of its water. DWP trucks are visible around town, and their facilities occupy multiple blocks west of 395. All this means Independence is peculiarly dependent on a city government over 200 miles away from it.

Around the corner from the LADWP buildings is Independence’s greatest public attraction, the Eastern California Museum. But inside this marvel of local history is an origin story rooted in dependence.

The name Independence was imposed by the U.S. military, which established Camp Independence in this valley back on July 4, 1862. In that period, the U.S. Army was not protecting anyone’s independence in California; it was making sure the new state stayed in the Union, while fighting and killing local Indigenous people in campaigns that, according to recent scholarship, amounted to genocide.

That history sat with me when I drove six miles south of town to visit another example of the American government’s approach to this part of California: Manzanar, the World War II incarceration camp for people of Japanese ancestry. The wind never stopped howling as I completed the three-mile loop through the camp, peering at old barracks and reflecting on the insatiable hunger of the United States to imprison its own people and—again in recent years—those who try to migrate here.

Did we stop believing in independence? Or did we ever really believe in it to begin with?

Perhaps we’d be better off giving up on glorifying independence as an American value. The 21st century is all about interdependence instead. We’ve needed one another to survive the pandemic, as our governments proved unable to prevent mass deaths. It seems certain that we’ll need to do the same to save ourselves from climate change. In a country as rough as ours, to be independent is to risk isolation and worse.

“Go as far as you dare in the heart of a lonely land,” wrote the Independence-based writer Mary Austin in her 1903 book about the region, The Land of Little Rain, “you cannot go so far that life and death are not before you.”

Today, a large plaque hangs from Austin’s former house on Market Street. As I read it, I wondered: why not call the 4th Solidarity Day? After all, it’s a holiday where we don’t behave independently. Instead, we act collectively, performing the same rituals of barbecues, parades, and fireworks all across the country.

Would we even miss Independence Day if we redefined it? After all, independence is dangerous these days. Americans spend considerable energy pressuring one another to be loyal team members—and not stray from our political, cultural, or corporate tribes. Independent thought, expression or action is likely to get you fired, sued, or severely ostracized.

Meanwhile, our elected representatives, our social movements, and our non-profits spend much of their time cozying up to the wealthy people and institutions that fund them. Talk of revolution and rebellion has been relegated to the fringes.

Just don’t call it a celebration of independence. Because neither you nor anyone else believe in that anymore.