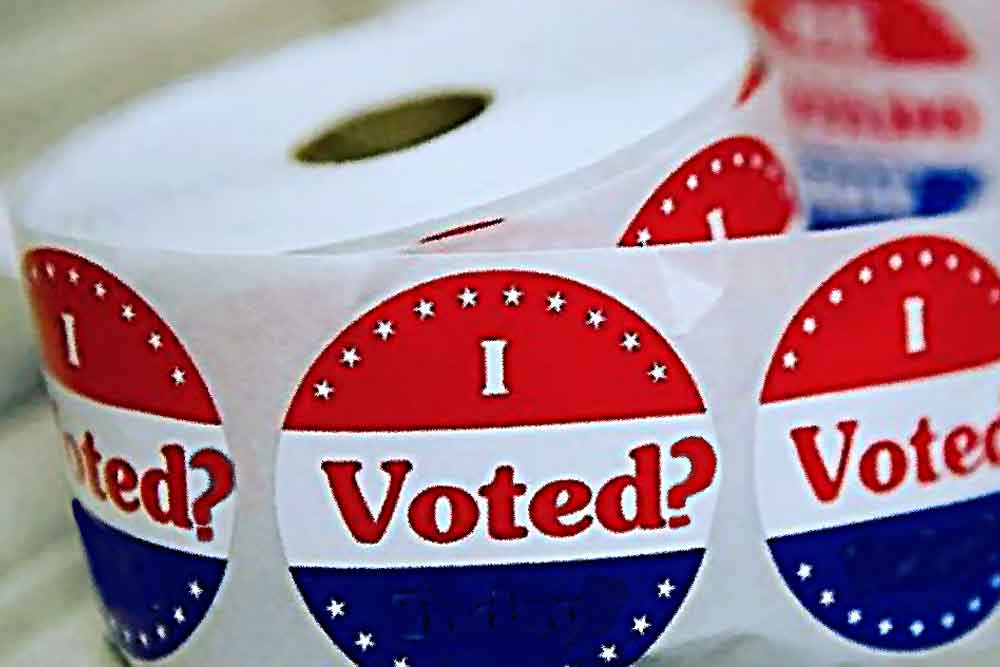 The recall election is fraught with confusion and mixed messaging. Illustration via polaristest/Flickr CC BY-NC-ND 2.0 and Zócalo.

Even before the voting started, Democrats and California elites were crying foul. And when they say we need to change the way we do recall elections, they are half-right.

The recall—the question of whether to remove a governor—works just fine, despite what you may have read. But the election piece—the second question on the ballot, in which voters must pick a replacement for the governor if he’s recalled—is an anti-democratic mess.

And worrying about an undemocratic result in this one election understates the problem. All California elections, be they recalls or not, don’t match how human beings think, choose, and vote.

For one thing, humans do best when we have a lot of information about a few clear choices. But our elections give people dozens of possible candidates, about whom we often have very little information. Low-information elections are also deeply vulnerable to misinformation.

Over the last decade, we California voters eliminated party primaries for state and federal elections. The change was supposed to discourage political polarization and give us more moderate candidates. It’s done the opposite.

In the party primaries of old, a voter could study their party’s relatively short list of candidates, then choose one. The process gave us a greater sense of the people for whom we were voting.

Our reforms should make it easier for us to vote by party. The simplest and fairest way to do that would be to adopt a system of proportional representation, in which Californians vote for a party or slate of party candidates.

Our current “top two” system, sometimes called an “open” primary, confuses and overwhelms voters. We put the dozens of candidates for a single major public office all together, regardless of party, with 30 or more names running over multiple pages. It’s impossible for voters to know anything about more than a handful of the candidates—much less to find the choice they prefer in that thick jungle of names.

The recall replacement election, with 46 candidates, is thus a typical California electoral clusterfuck, and voters are confused about how or whether they should vote on this second question. Democrats, unable to come up with short and clear messaging on the matter, have given up, and told voters not to name a replacement for governor. When the largest party in the state is telling people not to vote, something is seriously wrong.

Such confusion and mixed messaging also tend to discourage voter turnout. But this is hardly the only problem; these big, all-party, open elections can be easily gamed.

The main argument against this recall is that a person could become governor with a slim plurality of the vote (the current leader’s vote share is 20 percent in polls), and with far less popular than the governor, who could get 49 percent of the vote and still be removed from office. That’s awful, but it’s not the only awful possibility in these too-many-candidate California elections.

That isn’t democratic. And it doesn’t fit how we vote. Humans are party animals—party affiliation almost always determines our vote, studies show. And if you doubt that, just try to remember the name of the person you voted for in your local State Assembly race last year. (Unless you are incredibly active politically, you won’t be able to.) But can you remember the party of that candidate? Probably yes. Most Californians vote for candidates of the same party.

Our reforms should make it easier for us to vote by party. The simplest and fairest way to do that would be to adopt a system of proportional representation, in which Californians vote for a party or slate of party candidates. Whether it’s a recall or a regular election, the party with the most votes would get the office—and a number of representatives equal to their percentage of the vote.

If that’s too radical for you, another alternative would be to replace the current election system with ranked choice voting, which was used recently in the New York City mayoral election. Ranked choice encourages coalition building, and elevates candidates with broader support—unlike the top two and the recall jungle election systems, which are better for candidates with narrow but intense support.

Unfortunately, these types of reforms aren’t on the table. The leading Democrats, and California elites who are angry about this recall, are proposing reforms that in fact limit democracy.

So far, there have been calls to make it harder to qualify recalls for the ballot, even though it’s already very hard—requiring nearly 1.5 million signatures in a short time frame. (This year’s recall had an extra four months to qualify, because of a judge’s unusual ruling; in the normal time frame, it never would have made it.) Making recalls harder to qualify would only make them more expensive—meaning that only the richest people or interests could pursue recalls.

Another argument is that there shouldn’t be an election at all—that the lieutenant governor should succeed a recalled governor. That may be what previous constitutional framers in California intended, but that’s not very democratic. Lieutenant governors are often allies of governors, so replacing one with the other isn’t change. Shouldn’t people have the right to choose the successor of any official they want to recall?

Still other elitists are arguing for limiting the basis for recalls—requiring that a politician be guilty of violating the law or corruption to be removed from office. But that would make the recall like the federal impeachment process—a quasi-prosecution to meet a standard of “high crimes and misdemeanors”. And as we learned in the Trump era, it’s impossible for politicians to remove even the most abusive fellow politician from office in a process like that.

People should be able to remove their governor for incompetence, failure, or any other dereliction of duty. In this apocalyptic century, a governor who can’t respond effectively to emergencies might need to be replaced. California’s recall, which can have any justification, might save lives.

Making it harder to use recalls also would diminish some of the positive effects of the tool. Gavin Newsom’s performance clearly improved earlier this year when it appeared he might face a recall. He was more responsive to the public, replaced failing staff members, and took more aggressive actions to aid needy Californians.

Regardless of whether Gavin Newsom wins or loses, California may win—if this recall election forces us to reform all of our elections.