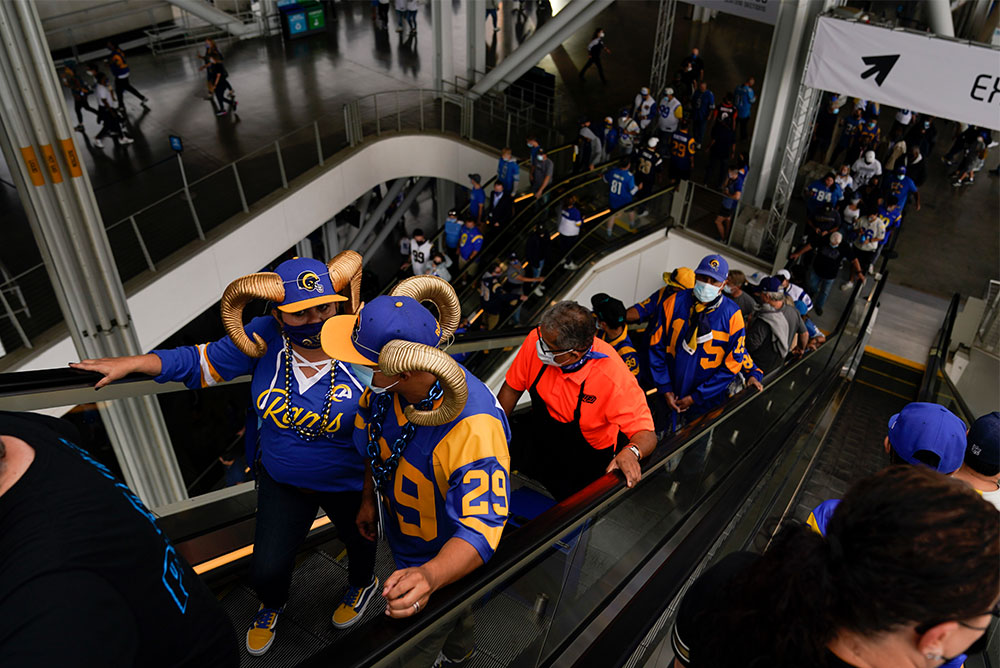 When is California going to stop playing COVID games?

Your columnist is a devout follower of state public health officials and their guidance. I wear two masks in public settings and get tested regularly, even after having had all three of my COVID vaccine shots.

Yet I’m struggling to take California’s latest public health directives seriously—especially the reminder to keep gatherings small and avoid large events. That’s because it’s not clear that state and local officials are serious about what they’re saying.

I can witness their lack of seriousness firsthand in my own hometown of Pasadena.

As the state and Los Angeles County announced a new indoor mask mandate and other updated COVID-safety recommendations in recent weeks, tickets were going on sale for the January 1 Rose Bowl between football teams from the University of Utah and the Ohio State University. Already, Utahans, whose university has never before qualified for the “granddaddy” of bowl games, are descending upon us.

So, it’s likely that 90,000 fans who have traveled from two states with even lower vaccination rates than California’s will cram into a small and historic stadium in the midst of an enormous winter surge of the Delta and Omicron variants. That same day, hundreds of thousands of people more are planning to line Colorado Boulevard to watch the world’s greatest floral parade.

“Our collective actions can save lives this holiday season,” says State Public Health Officer Tomás J. Aragón’s statement reinstating the indoor mask mandate. If officials truly want to save lives, wouldn’t they cancel this exhibition football game? Or, at least, wouldn’t we be seeing a reduction in the number of tickets sold, and the number of people allowed to attend?

And wouldn’t I be hearing, from my many friends at the Tournament of Roses, about plans to enforce physical distancing along the five-and-a-half-mile parade route?

Or to put my question more directly, to Gov. Newsom, who has extended his own emergency powers through March 31: Why should anyone take seriously your mandates and emergency declarations while you allow major sports and entertainment events in California to go on before packed crowds?

Now let me be clear: I’m not advocating for a return to the lockdowns that destroyed businesses, crippled schools, and touched off a society-wide crisis of isolation and mental health. We need to keep the essential institutions of California, our communities, and our economies open.

But the Rose Bowl—while it may be the most entertaining college football game of the year, and a favorite event of your columnist—is not essential. Yes, it can bring a lot of money to our hard-hit tourist industry, to other local businesses, to universities that play in the game, and to the media that broadcast it. But, in this context, it’s a significant risk, even if masking and vaccine rules are carefully enforced (which seems unlikely). In fact, if it were to become a super spreader event or a contributing factor in rising post-holiday case numbers, it might even jeopardize our returns to schools and workplaces after the holidays.

It’s hard for a Pasadena boy to say this, but holding the Rose Bowl in this time and place appears irresponsible.

So, too, is holding the Super Bowl, scheduled to be played in Inglewood, another Los Angeles County city, on February 13. Indeed, the case against the Rose Bowl, a fully outdoor venue, is weaker than that against the Super Bowl, which takes place at SoFi Stadium, which has open sides but a canopy-like roof.

It’s like a college football game in which our team is getting annihilated (800,000 American deaths and counting) and the clock keeps ticking.

If this emergency continues into the first several weeks of the new year, the Super Bowl needs to be called off or postponed—or at least held without a capacity crowd in the audience. I don’t make this suggestion with any satisfaction. Inglewood and its businesses have invested heavily on their town becoming an international leader in putting on mega-events, and this game is an early test. But if the recent guidance is serious, then the Super Bowl needs to be less super-sized this year.

At this point in the column, I am tempted to suggest ditching the Grammys, set for January 31, and the Oscars, scheduled for March 27, four days before the governor’s emergency order is expected to conclude. But very few people care about these award shows anymore.

Which brings me to the larger problem: that these massive high-profile events make a mockery of public health directives, and those of who follow them. Watching crowds gather fuels cynicism, conspiracy theories, and dangerous social divides. Why do the rich and powerful get to keep having their parties and bowl games, while your office or church feels pressure to call theirs off?

It’s become common for officials and elites to dismiss criticism by blaming the actions of everyday people for the continuing pandemic. My unvaccinated, unmasked neighbors richly deserve our scorn, which renders the tactic effective.

But blame has become a substitute for leadership, clarity, and consistency. Newsom and other authorities won’t say what would have to happen for the state-declared emergency to end. There’s been no discernible shift in strategy among California governments to account for the fact that the coronavirus seems likely to become endemic, a part of life, like the cold or flu. State and local officials, and their media acolytes, defend their lack of clear explanations by citing the virus’ unpredictability.

Meanwhile, they trot out an endless loop of mixed messages. Get vaccinated for your protection—but a vaccine is really not enough protection, so reconsider your holiday plans. And please avoid large gatherings—and root on the Rams and the Chargers all the way to the Super Bowl, right here in their home stadium.

These contradictions add to the widespread, desperate feeling that we’re living in a pandemic purgatory where no one is in charge. You might even say it’s like a college football game in which our team is getting annihilated (800,000 American deaths and counting) and the clock keeps ticking.

In recent weeks, my faith in public health, and my resolve to stay safe, have been shaken. I’ve been thinking of calling up a buddy who can hook me up with Rose Bowl tickets, so I can go to the game, and, in solidarity with my fellow Americans, roll the dice on whether I catch COVID. State and local public health officials don’t seem to mind.

Because if they weren’t playing games with our health, they’d call off the games, right?