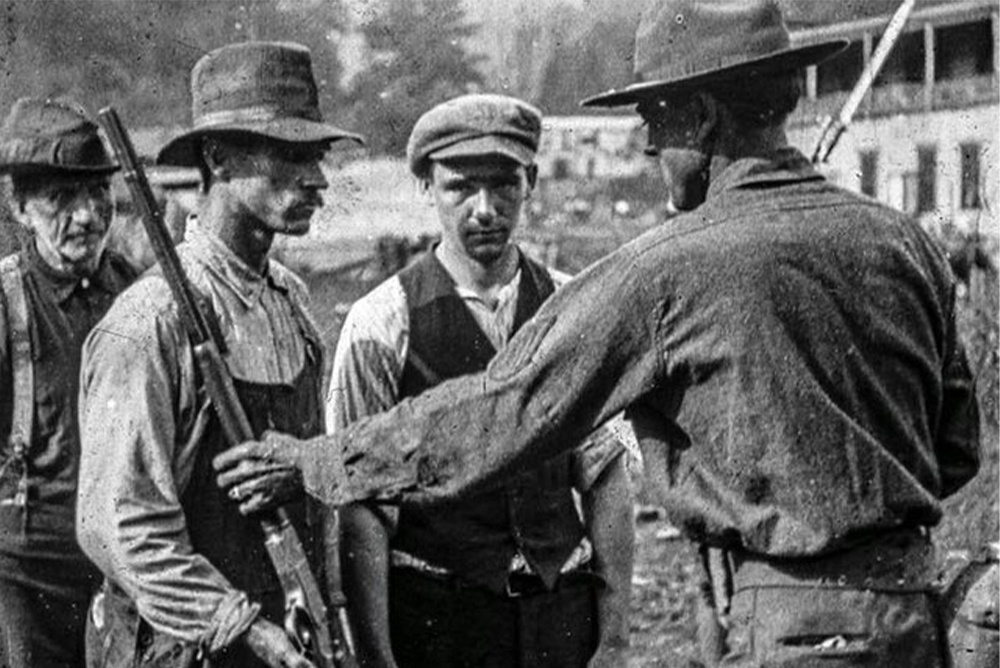 In September 1921, as part of the largest armed labor uprising in American history, members of the Red Neck Army surrendered their arms to the U.S. Army. While the battle stayed alive in miners’ families, the stories being “passed down around kitchen tables and on front porches,” it has largely been forgotten in collective memory, writes Kenzie New Walker. Courtesy of the West Virginia Mine Wars Museum, collection of Kenneth King.


For most people, the memory of the largest armed labor uprising in American history is unknown, buried beneath the dirt of West Virginia’s Blair Mountain alongside bullet casings and relics of coal camp life. In miners’ families, the stories stayed alive, passed down around kitchen tables and on front porches. But until the 21st century, there were no monuments, museums, or markers of the West Virginia mine wars, a seminal American story of how labor unions came to be.

In late August 1921, some 15,000 mineworkers and allies banded together across racial, gender, religious, and ethnic lines and marched south from the town of Marmet, West Virginia. They were determined to free jailed miners who, for decades, had been trying to unionize the southern West Virginia coalfields. Some of the marchers dressed in military uniforms—many were World War I veterans—while others wore blue-jean overalls. All tied red bandanas around their necks to distinguish friend from foe. Known as the “Red Neck Army,” they were highly organized and armed to the teeth.

The miners never reached their intended destination. Instead, beginning on August 31, they clashed with coal company deputies, mine guards, and the state militia over five and half days of combat at Blair Mountain. It was the largest armed uprising since the Civil War—and it ended only when the U.S. Army intervened. While the number of fatalities remains largely unknown (estimates range from 16 to over 100), we do know that it was the second time in American history the government planned to bomb its own citizens—only three months after the first, Oklahoma’s Tulsa Race Massacre.

Those five and a half days were a generation in coming. The majority of West Virginians had gone from living and working on their own land to being totally dependent on out-of-state coal mining companies, who controlled and owned entire towns. The work was unrelenting and exploitative: Coal companies often paid miners in “scrip”—a currency only redeemable at the company store—by the tonnage of coal they hand loaded from the mountains. The conditions underground subjected workers to roof falls and gas explosions, both of which were often catastrophic. For workers and their families, these companies became landlords, employers, and overseers.

Blair Mountain faded in West Virginians’ and Americans’ collective memory. Politicians strategized to stamp it out of textbooks and public discourse, while miners—many of whom had been on trial—swore themselves to secrecy for fear of retribution.

In addition to hiring West Virginians displaced from farms, the coal companies recruited immigrants from Europe and African Americans from the South. Companies housed them in tight but segregated communities, aiming to use prejudice and racial barriers to prevent unionization. But their strategies backfired. Unionization efforts, including the Red Neck Army, broke those barriers partly out of necessity and partly as a source of strength. Striking workers moved into desegregated canvas tent colonies after being evicted from their company-owned homes.

By 1921, the United Mine Workers of America (UMWA), which formed in 1890, had organized much of the coalfields in West Virginia and elsewhere with the promise of better working conditions and a better life. However, in the southern counties of the Mountain State, such as the areas around Blair Mountain, the coal operators and hired mine guards employed harsh countertactics to keep the miners from unionizing, including the murders of union-supporting police chief Sid Hatfield and his deputy Ed Chambers. Hatfield and Chambers’ murders in early August sparked pro-union rallies throughout southern West Virginia, which ultimately led to the Red Neck Army’s armed march.

After the end of the physical battle, a legal battle began that put over 500 miners on trial for a variety of charges, including murder and treason, and crippled the UMWA. Mineworkers in southern West Virginia would have to wait to join until the right to organize was written into federal law as part of the New Deal. In the mid-1930s, they finally gained the better wages, safer working conditions, and other benefits and protections they had been fighting for over decades.

Blair Mountain faded in West Virginians’ and Americans’ collective memory. Politicians strategized to stamp it out of textbooks and public discourse, while miners—many of whom had been on trial—swore themselves to secrecy for fear of retribution.

In 2013, a ragtag group of Appalachians—mineworkers, educators, townspeople, activists, and descendants of Red Neck Army members—came together and shared a table at the UMWA Local 1440 hall in Matewan, West Virginia, 47 miles from Blair Mountain. The folks who gathered were determined to ensure that this history would be celebrated, remembered, and shared for generations to come.

This was the first board meeting of the West Virginia Mine Wars Museum, which opened two years later in downtown Matewan. I started work at the Mine Wars Museum as its first part-time executive director in 2018. As the daughter, granddaughter, and great-granddaughter of union mineworkers, it is an honor to preserve and share the history and legacy of my ancestors and those who stood with them for labor justice. 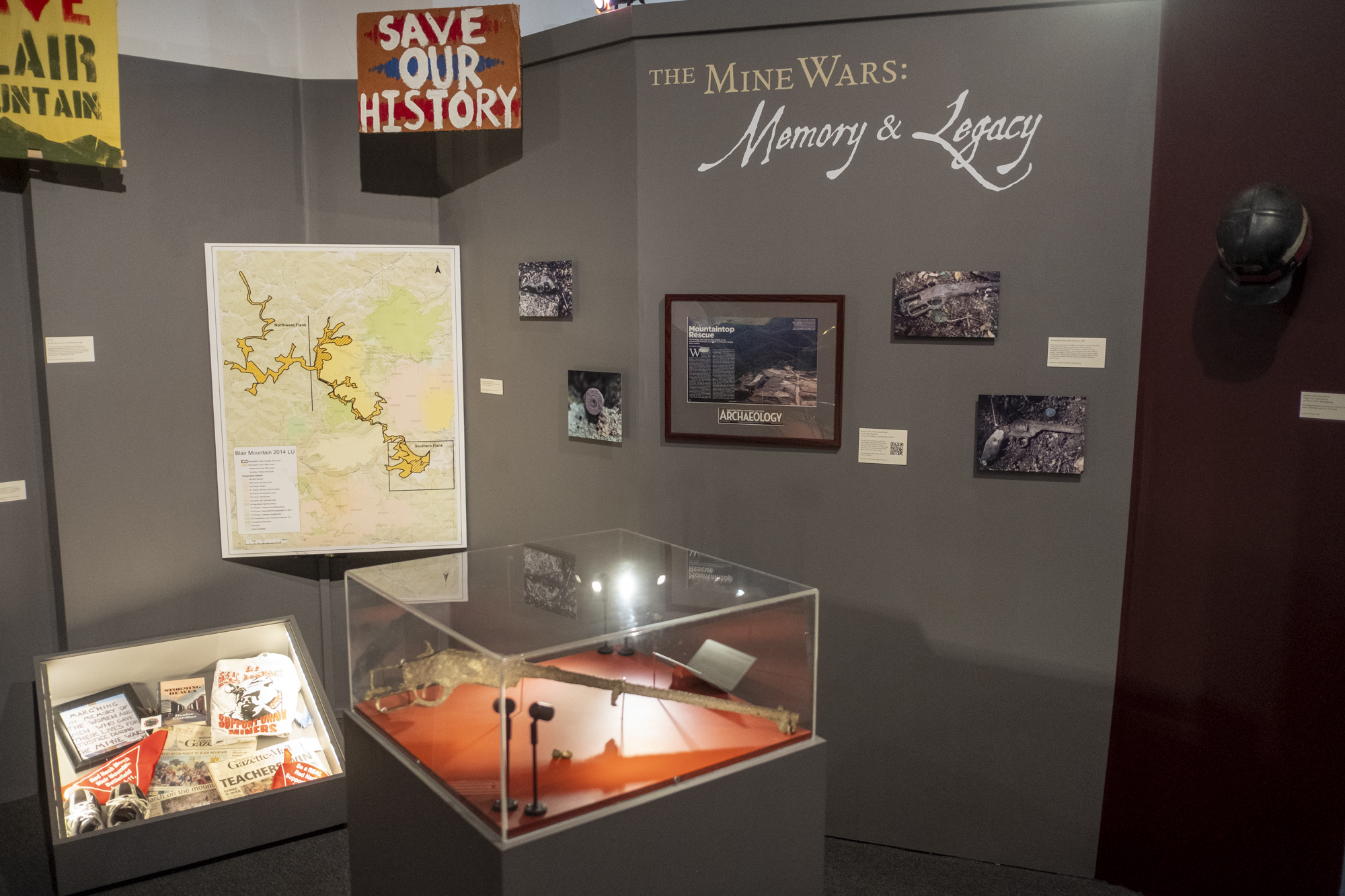 One of the museum’s key initiatives is to bring visibility to the sites of the West Virginia Mine Wars. Today, Blair Mountain’s twin-peaked ridge stands tall and quiet. Despite the mountain’s inclusion on the National Register of Historic Places, you can drive through the miners’ marching route and over Blair Mountain without realizing you’re there. But that won’t be the case for much longer.

On the heels of the Battle of Blair Mountain Centennial and with funding from Philadelphia’s Monument Lab, in 2022 we launched Courage in the Hollers: Mapping the Miners’ Struggle for a Union. We’re taking the museum beyond its four walls and holding community meetings along the miners’ 50-mile route to resurface the stories of the Mine Wars and working people—past and present—in public.

This Labor Day, steel silhouettes of 10 men and women, shoulder to shoulder in solidarity, marching toward Blair Mountain, are being erected in Marmet, where the Red Neck Army’s route began, and Clothier, just 12 miles from where the battle raged. The silhouettes are not of the original miners but of local community members—honoring the history that fuels our shared hope for the region and working people across America. As much as it pays homage to the past, it’s a vision for the future.

We held our Courage in the Hollers kickoff meeting in Clothier in a small building that started as a school, then became a church, and is now a union hall. One attendee wondered out loud about Monument Lab’s backing: “Why does someone in Philadelphia care so much about coal miners?”

The simple question struck me. Local residents know this history has been ignored—it is absent from the landscape, their textbooks, public records, and gathering places. But they haven’t forgotten.

Neither have the local archeologists who have spent decades unearthing and preserving artifacts, and the miners’ descendants, more and more of whom are sharing their stories publicly. New accounts of the battle are surfacing for the first time as the monuments and markers to labor make their homes in Clothier and Marmet. Meanwhile, many people are still fighting for the rights and standards the Red Neck Army marched in support of—from miners in Alabama entering their 17th month on strike to unionizing workers at Starbucks and Amazon.

Though the history of those who fought at Blair Mountain is now 101 years old, it is also as alive as ever.