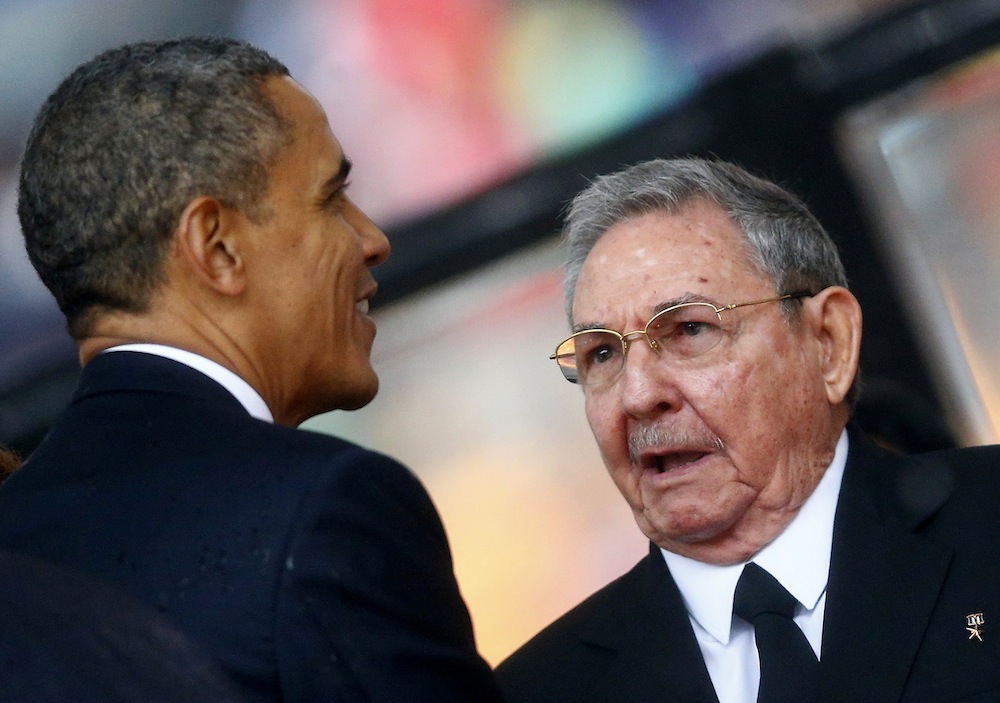 Barack Obama’s handshake with Raúl Castro at Nelson Mandela’s memorial service made headlines around the world, but it’s understandable that the president’s “selfie” with Danish leader Helle Thorning-Schmidt received more buzz. The U.S.-Cuba drama is about as sexy as one of those aging daytime soap operas, with protagonists (or their descendants) who stick to their assigned roles and go through the motions, even after much of the audience has moved on. (Even if your interest is in Latin America, “the handshake” deserved less attention than “the kiss,” Obama’s greeting of Brazilian President Dilma Rousseff, who notoriously cancelled her fall visit to Washington on account of Edward Snowden’s revelations that the NSA spied on her.)

On all fronts, Cuba has lost its luster. For all of the romanticizing of Ché and Fidel, no one can pretend that the impoverished Caribbean island nation is still a model for anything apart from depriving a nation of freedom for half a century. Standing in line at airport customs in Mexico recently, I was reminded of the extent of Cuba’s collapse when I read signs admonishing returning travelers from Cuba to be mindful of cholera symptoms.

With that sort of record, it helps to have a hostile “imperio” to scapegoat, especially when it imposes an embargo and threatens regime change. But the United States is becoming a less convincing villain in this drama. In real life, the consequences of antagonism toward el imperio nowadays seem to be minimal, even if the NSA might choose to spy on you. As Hugo Chávez and his allies have proven, you can mock and bash the U.S. all you want. As Brazil has shown, you can successfully thwart American policies for the region at every turn. When Secretary of State John Kerry announced last month in an address before the Organization of American States that “the era of the Monroe Doctrine is over,” Latin American dignitaries weren’t sure if they should applaud—probably because they assumed that era was over long ago.

That Castro shared the speakers’ podium in South Africa was an unfortunate nod to the nostalgia felt around the world for the heroic David of an island that stood up to the Goliath hegemon across a narrow stretch of water (and that stood up for Nelson Mandela when he was imprisoned). Mandela’s fidelity to the Castro brothers (defended here by my colleague T.A. Frank) may be understandable, but it is also a betrayal of the universal democratic values Mandela espoused. For 11 million Cubans, there is nothing endearingly David-like about the Castro regime; it’s just one interminable nightmare.

But back to the handshake, which the Obama administration neither planned nor seems to regret. Obama took some heat from the right over the gesture, but not much more than he takes from the right for having breakfast each morning. The White House line is that the handshake was the polite thing to do under the circumstances. But it’s also true that antagonism between Washington and Havana has mellowed over the past year, and the bilateral relationship is becoming less and less about governments and more and more about interactions between people.

Cuba has made it easier for its citizens to travel abroad, and the United States has made it easier for Cubans to obtain multiple-entry visas and go back and forth. Washington has relaxed (although, shamefully, not eliminated) the ban on travel to Cuba. And the Obama administration has lifted limits on the amounts of cash U.S. residents can send relatives in Cuba. This advances two goals: it helps ordinary Cubans, and it makes them less dependent on their government. (I should disclose here that the New America Foundation, where I work, is developing communications technologies to help connect Cuban citizens to the outside world and to each other, with the support of U.S. government funding.)

The other big impetus for the recent thaw was the Castro regime’s surprising decision to keep Edward Snowden out of the Americas, frozen in Moscow. It’s not clear what Havana’s motivations were, but Cuba’s government asked Russian authorities at the last hour to keep Snowden off his connecting Moscow-Havana Aeroflot flight last July—and you can draw an implicit line between that decision by the Castros and the handshake in Johannesburg. The thaw is also evidenced in closer dialogue between both governments on prosaic matters like postal service and shared law enforcement concerns.

Not that we’re ready to kiss and make up. Much like those long-running soap operas that can’t resolve all plotlines lest they go off the air, the United States and Cuba can’t bring themselves to normalize their relationship. For the Castro brothers, such a move would mean the end of their great scapegoat. That is why the regime continues to hold onto Alan Gross, the USAID contractor jailed for bringing telecom equipment to Cuban groups. If Cuba really wanted improved ties, Gross would have been reunited with his family long ago.

The Obama administration, for its part, remains stuck in its outdated, surreal, and counterproductive framework for Cuba policy. The core fallacy underlining our approach is that the United States must either keep the embargo in place or else become fast friends with Cuba. But the United States has full diplomatic and commercial relations with plenty of countries ruled by undemocratic and obnoxious regimes (see China), and we rightly defend such engagement. Embassies are go-betweens, not friendship bracelets.

Meanwhile, critics of current U.S. policy, both at home and abroad, often end up as apologists for the Castro regime, working hard to minimize its abuses. It shouldn’t be so difficult to stake out a position where we call two spades two spades: Cuba’s regime is awful, and our policy in response is counterproductive. The sad reality is that with Obama facing so many competing, and seemingly more urgent, challenges overseas, Cuba policy drifts along through inertia, in a way that serves the Castro regime’s purposes.

The United States is correct to insist that Cuba not be given full-fledged membership in the hemispheric community until it lives up to the Inter-American Democratic Charter—much the same way countries that fall short on the democratic scale can’t join the European Union. But we will stand on firmer moral ground to make this case if we drop the embargo and forge diplomatic ties, and the United States will then be in a better position to empower Cuba’s people and civil society.

In other words, just because Obama shakes hands with Castro, it doesn’t mean he’s about to take a selfie with him.