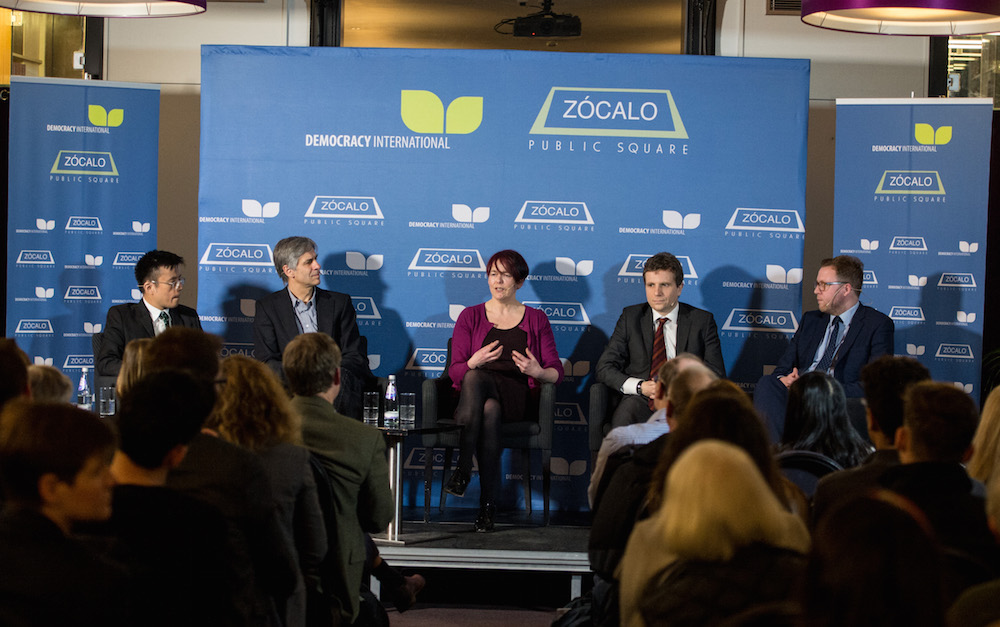 On the surface, this would seem to be a simple yes-or-no question. But what exactly are voters supposed to take into consideration when casting their votes? What does the European Union mean to them? And what exactly does “remaining” or “leaving” even mean, in the context of the U.K.’s ties to the continent? Those were some of the themes explored last night at a Zócalo/Democracy International event entitled “What Does Britain Owe Europe?” at the Royal Institution in London.

Sewell Chan, an international editor for The New York Times and the moderator for the evening, kicked off the discussion by asking the panelists to try pinning down the meaning of the referendum: “What is this debate really about? Is it about money, migrants, identity, sovereignty, democracy, football, or something else?”

Stephen Booth, co-director of Open Europe, a think tank that has not taken a position on the referendum, pointed out that if the debate begins to be more about certain issues than others, the side likely to win also changes. If the referendum debate revolves mostly around immigration policy, then the “Leave” EU campaign has an advantage. But if it’s more focused on the economy, then the “Remain” side has an advantage. Both sides are trying to foment fear around the uncertainties of each other’s position.

Britain’s Prime Minister David Cameron has been talking about his strategy with the EU in a way that doesn’t help clarify the question for the public. Strangely, Cameron hasn’t led his campaign or talking points with the most important overarching concession he recently obtained from his fellow European heads of state: an exemption from embracing the notion of the “ever closer union” the EU has long professed to be.

That, Booth said, “should’ve been the philosophical debate we’re having and how does everything else fit into that?” It’s long been clear that Britain is not going to adopt the euro or agree to the shared-border Schengen agreement that governs core continental EU members, and Booth thinks that the government could be doing a better job of reconciling this reality with the possibility of still being an important EU member, deriving benefits from access to its single market.

For Damian Chalmers, a professor of EU law at the London School of Economics, the referendum is broadly about “What does the European Union do for us?”

For better or worse, he pointed out, EU law makes up one-seventh of British law, and these statutes have revolutionized laws affecting everything from the environment to workplace discrimination, financial services and broadcasting. So the three questions the British public must answer about the EU are: Does it provide the sort of market support that British citizens like? Is the EU sufficiently democratic? And do the British have a more mobile, cosmopolitan outlook or a more immobile, rooted one?

This question of national identity is key, said Laura Cram, professor of European politics and director of the Neuropolitics Research Lab at the University of Edinburgh. There is a huge portion of Britons that feel anxious because of issues such as migration, and it’s important for campaigners on both sides to empathize with those concerns. “There is … a sense within certain parts of the community that their cultural identity is under threat,” she said. “I think we underestimate that at our peril.”

Gerald Häfner, who was a Green Party member of the German and European Parliaments and one of the founders of Democracy International, pointed out that Germans think that it is “strange” that Britain is having an identity crisis about its relationship to Europe. Germans, probably because they lost the war and feel a great deal of guilt for starting it, see no alternative to a future in which “we want to live in Europe with all other European nations as friends.”

In Germany, he notes, a large majority says they need a common Europe. “And no one could imagine a Europe without Great Britain,” Häfner said.

And yet, at the same time, the entity known as “Europe” is having its own identity crisis, Häfner said. What should be decided at the national level and what should be decided at a level beyond the nation-state? And how can ordinary citizens feel more connected to the decisions that the European Union makes when so many of the decisions right now seem to be made by civil servants?

“I think we should make an end to that very complicated, top-down Europe,” he said. That would involve making fewer decisions at the level that applies to all of Europe, and then, for the important ones that remain, instituting conventions of elected officials who can get together to discuss the ideas and vote on them, so that people feel as if they have some say in the process.

Back in Britain, another issue that makes the referendum vote so thorny is that it’s hard for voters to know what the real consequences of a Brexit might be.

Booth pointed out that most analysts agree that leaving the EU would be disruptive in the short term. “But how long that goes on for, we don’t know,” he said. In the long run, “our view is that [the Brexit] could be either positive or negative, but not by a large margin each way.” It all depends on the terms of the divorce settlement between the EU and U.K., and whether the British embrace an accelerated globalization and engagement with the rest of the world once freed of the EU, or, conversely a “Little England” isolationist posture.

But one aspect of British politics that a “Leave” vote would certainly affect is the question of Scottish independence, said Cram. A 2014 referendum on whether Scotland would leave Great Britain failed, but if Britain chose to leave the EU, “it’s undoubtedly clear that there would be a strong sense amongst within those in Scotland that there is a possibility for another referendum” on Scottish independence. The Scotts, the argument goes, deeply value their EU membership, partly as a counterweight to English hegemony within the U.K.

In the question-and-answer session that followed, a member from the audience raised the question of whether the euro is destroying the European Union, noting that his previous support for the EU had diminished over time with all the troubles afflicting the euro currency, and the extent to which those troubles seem to have hijacked the EU agenda in recent years.

Booth agreed that Europe’s conflicted ideas about what should be required for true EU inclusion is muddying the waters when it comes to U.K. participation. If, as recent summits suggest, the EU is all about the shared currency and how the migrant crisis threatens the Schengen Convention governing border controls, then the U.K. won’t feel very included because it has excused itself from both of those agreements.

But if the main questions for EU discussion include how the single market can be made more efficient and deepened, and how the EU can become a stronger geopolitical player in the world, then the U.K. definitely has a role.

“If the EU continues to focus the vast majority of its energy on Schengen and the euro zone, it’s hard for Britain to know where it stands,” Booth said.

On this note, Häfner conceded that it isn’t only the British public that needs to reflect on what Europe means to them. People across the continent need to do so, too, with an eye towards making the Union more democratic and less remote, for all its citizens. 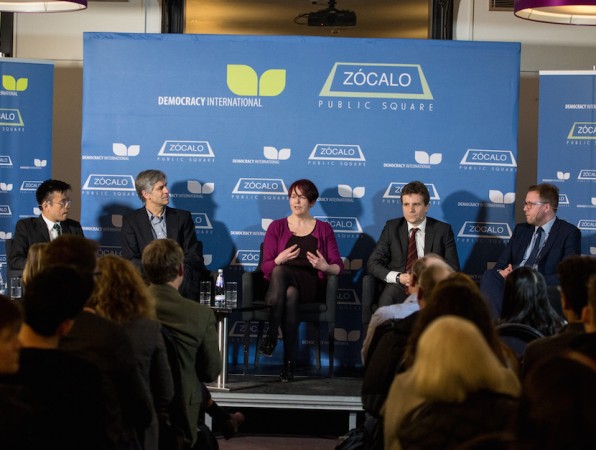 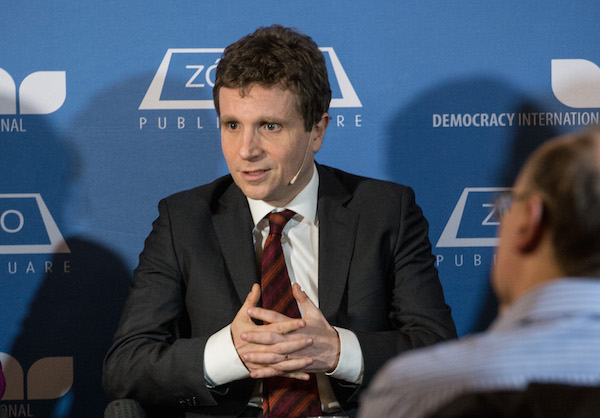 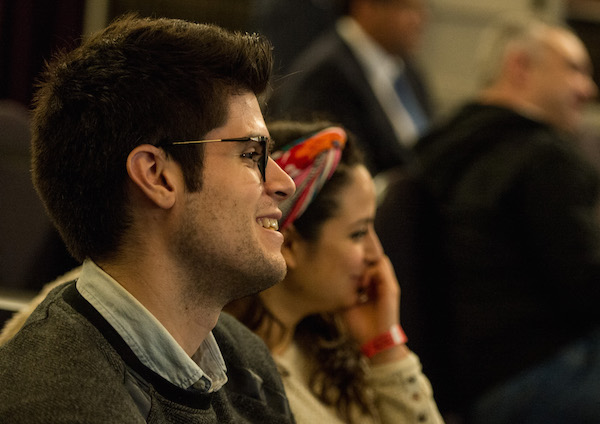 Great crowd at the Royal Institution 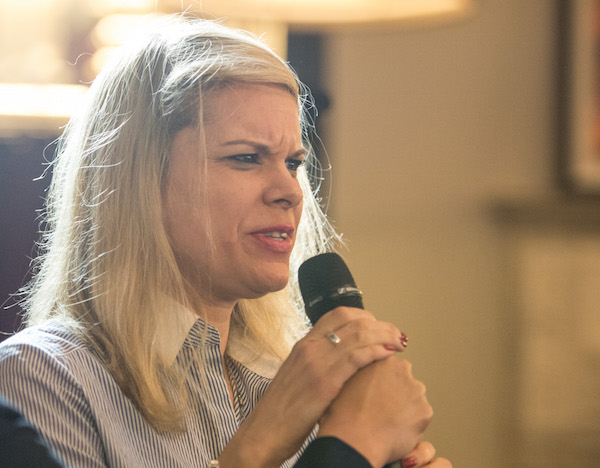 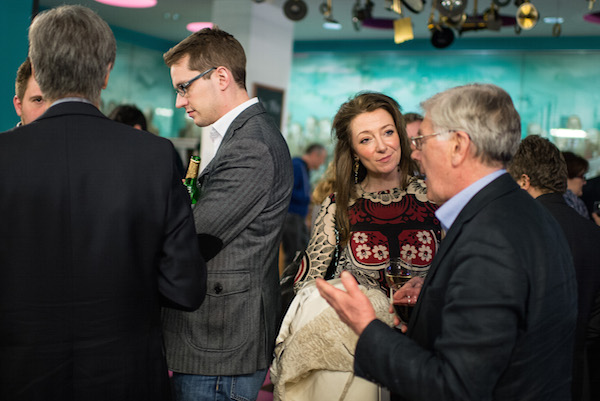 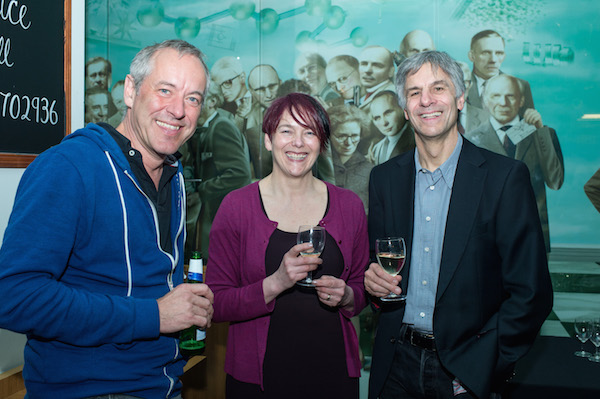 Panelists Laura Cram, center, and Gerald Häfner, right, with a guest at the reception