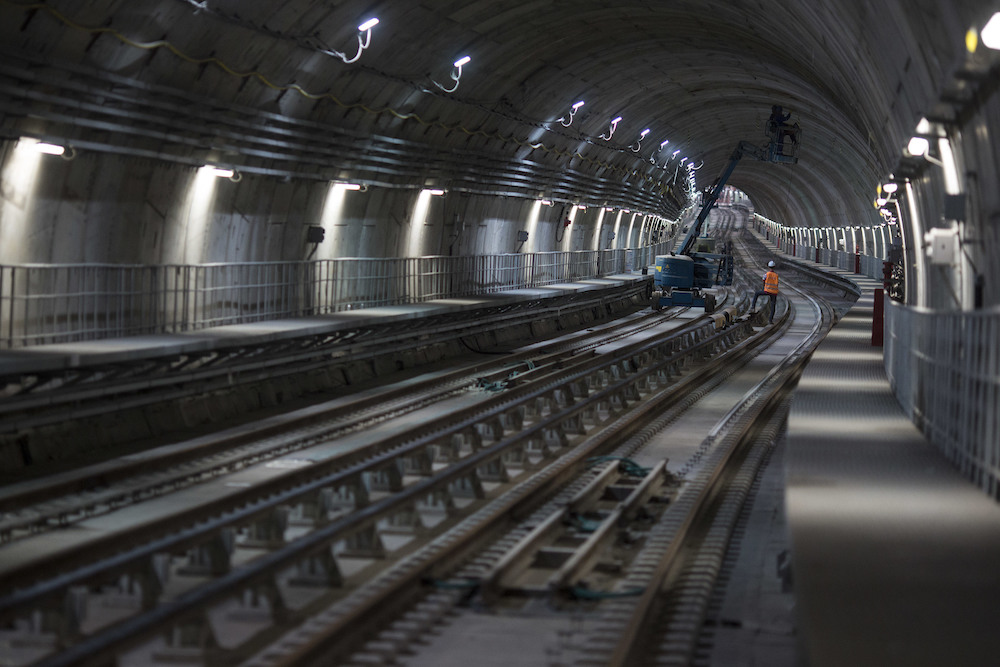 When the self-proclaimed greatest legacy infrastructure project of the Rio Olympics is a new metro line that stops eight miles short of the actual Olympic Park, you already know there’s a problem.

Yet there was the city’s mayor, the state’s governor, the national legislature’s leader, and the country’s interim president all at the metro’s inauguration—a half-year late, way over budget, and only a week before the opening ceremony for the 2016 Games.

Michel Temer, the interim president standing in while elected president Dilma Rousseff faces impeachment, had flown in just to make the landmark ride. He stood among smiling faces as the sleek subway glided over 10 miles of fresh track from the line’s previous terminus at Rio’s famed Ipanema beach to the western suburb of Barra da Tijuca, which houses the main Olympic Park and Athletes’ Village—though those facilities are a full eight miles away from the last stop.

As his train screeched into the station, a youth orchestra struck up “The Girl From Ipanema,” perhaps in reference to how that tall and tan and young and lovely girl no longer has to go on walking, but can hop on the metro instead. In the press scrum, I asked a reporter why we hadn’t been allowed to ride the metro, too. She suggested it was because of the risk of lefty journalists chanting “Fora Temer!” (“Out Temer!). Most Brazilians want new elections, and the political instability continues to be a preoccupation for Brazil and Olympic organizers.

Inside the airy Jardim Oceânico station, Temer, who Brazilians are quick to note bears a striking resemblance to Bela Lugosi’s Dracula, took to a podium and promised that Rio would show “what it’s capable of.” In turn, the mayor, in his trademark jeans and untucked work shirt, and the governor, still weak from a recent cancer treatment but seemingly determined to be part of the hoopla, also heaped praise on the project. Their common message: the $3 billion transit project will unify disparate parts of Rio, just as the Olympics would unify a divided Brazil.

You don’t have to have been a Brazil correspondent for three years to recognize that overstatement. Moreso than forging unity, the rail project seems like yet another marker of Rio’s controversial, overhyped, and ultimately underwhelming haul toward hosting the first ever Olympics in South America.

Sure, it’s easy to hate on the Olympics. Predicting the myriad of things that will go wrong is an established tradition of the Games, as much of a ritual as the torch-lighting ceremony. In much of the media, the competition is fierce for the most dire prediction, the most alarming headline, the most damning criticism of “the disaster that is Rio.” The Athlete’s Village is not up to spec (it wasn’t in Sochi or London either). The military has taken over airport screening (again, as happened in London). The environmental pollution is alarming (as it was in Beijing, which was called the most polluted games ever). The doomsayers came out in force before the 2014 World Cup too, but were proven wrong when the tournament went off largely without a hitch.

… the rail project seems like yet another marker of Rio’s controversial, overhyped, and ultimately underwhelming haul toward hosting the first ever Olympics in South America.

Amid all the finger-wagging, it’s no wonder 60 percent of Brazilians believe the Olympics will do more harm than good—a far cry from 2009, when the bid was supported by 89 percent of the population.

But it’s still hard not to be cynical over the self-congratulatory glad-handing on full display during the inauguration of the new metro line. And perhaps the troubles surrounding this heralded project help explain the downbeat mood in Brazil right now. It’s just another of the scores of big promises made that have failed to come to fruition.

Built over six years by as many as 10,000 workers at any given time, Rio’s new Linha 4 line claims to be the largest modern urban infrastructure project in Latin America—a dubious claim, given it’s just 10 miles of track with five stations. It was originally targeted to open in January 2016, but construction repeatedly threatened to halt amid funding shortages from the cash-strapped state government, whose economic woes reflect the recession that rattled Brazil in recent years. Costs ran over. The federal government was forced to step in with an emergency aid package. The length of the line was halved. An investigation into contracts-related bribery was opened. And after all that, the line will only be open to Olympic ticket holders until September—so much for connecting the people.

Then there are questions about who this new metro will really serve when it opens later this fall. In contrast to public transportation projects in U.S. cities that are attacked for skirting wealthier neighborhoods exercising their NIMBY vetoes, the expensive metro expansion in Rio is being criticized for routing into more affluent neighborhoods at the expense of poorer ones. And it’s not even clear that the wealthy residents will take the metro. One transportation expert involved in the planning of Linha 4, Marcus Quintella at the Getulio Vargas Foundation, explained to me that changes to the original design, including the scratching of planned parking near the line’s final stop, mean that these more affluent residents may opt to stay in their cars.

Officials tend to sweep aside such criticisms. At an earlier metro station unveiling, I spoke with Rio’s state secretary of transportation Rodrigo Vieira, who was in charge of finishing the $3 billion legacy project. He said costs were on par with transportation projects elsewhere in the world. He also countered that the line connects people of all classes, including a new stop just outside the city’s largest favela and service that better connects poorer residents to the wealthy neighborhoods where many take service jobs. The upgrades will cut a commuter’s ride by up to two hours, meaning people “will have more time to be with their families, to work, to have pleasure, to live.”

“Of course it’s not cheap,” he added, “But it’s a way to change the lives and change the city.”

As we spoke, trains rumbled through the station conducting test rides, seats still covered in plastic wrap. The station itself was still unfinished: equipment needed to be installed at the ticketing counter, an emergency closet lacked its fire hose, and the ceiling-mounted security camera boxes had yet to be equipped with actual cameras. Vieira brushed off these concerns too.

“We will operate with all the security and safety that the Rio de Janeiro subway is known for all over the world,” he said, though it isn’t clear that the small metro system has any reputation outside Brazil, and the city’s not exactly known for safety.

The statement stands in contrast to a feeling of insecurity that seems to be permeating Rio right now. After the inauguration ceremony, I rode the newly inaugurated metro back to Ipanema with Mateus Araujo, the conductor of the youth orchestra that had played “The Girl From Ipanema.” He said they would likely use the new line during the Olympics to perform at venues around the city, but he was concerned about safety. He’s been robbed at gunpoint twice over the past two years, and kids in his orchestra sometimes miss practice because it’s not safe to leave their homes in favelas riven by gang violence and police reprisals.

… it’s clear that the 2009 host bid was made amid the hype of the country’s future prospects, but with no real plans for how to accomplish everything the investment promised to bring.

It’s not limited to poorer neighborhoods either. To maintain security during the Olympics, some 85,000 military and police personnel have descended upon the city. Helmet-wearing commandos patrol the beaches and streets with their fingers ready on the trigger. Despite this, a gang was filmed last week pulling a man from his car and emptying his pockets within blocks of the governor’s palace. Tellingly, the government of France has issued an advisory to tourists suggesting they have a banknote ready to appease potential attackers, suggesting that in Brazil security is not a matter of avoiding robbery, but coping with it. The arrest of 12 suspects in an ISIS-pledged terrorist cell also did nothing to quell a city already on edge.

For residents and tourists alike, the first concern isn’t even about where the metro goes, but about getting there safely in the first place.

In this way, the Linha 4 line seems to underscore Brazil’s tendency to put the cart before the horse. Looking back, it’s clear that the 2009 host bid was made amid the hype of the country’s future prospects, but with no real plans for how to accomplish everything the investment promised to bring.

The city’s crime is down, but serious safety concerns remain because thousands of extra security units aren’t enough to combat deep-rooted violence. The bay remains horribly polluted with raw sewage because pledged water treatment infrastructure never appeared. Foreign capital is coming in, but won’t necessarily turn the tide of an economic crisis.

The new metro tracks were laid, but the city will remain disjointed.

Perhaps the best one can say is that at least the train runs. Given the country’s unexpected downturn and political upheaval, it is arguably a feat that Rio accomplished what it did. Sure, it’s disappointing—but maybe it was doomed to be.

The train will run, the Games will go on, and the country will likely get a boost. But will Brazilians be more united after their Olympic moment?