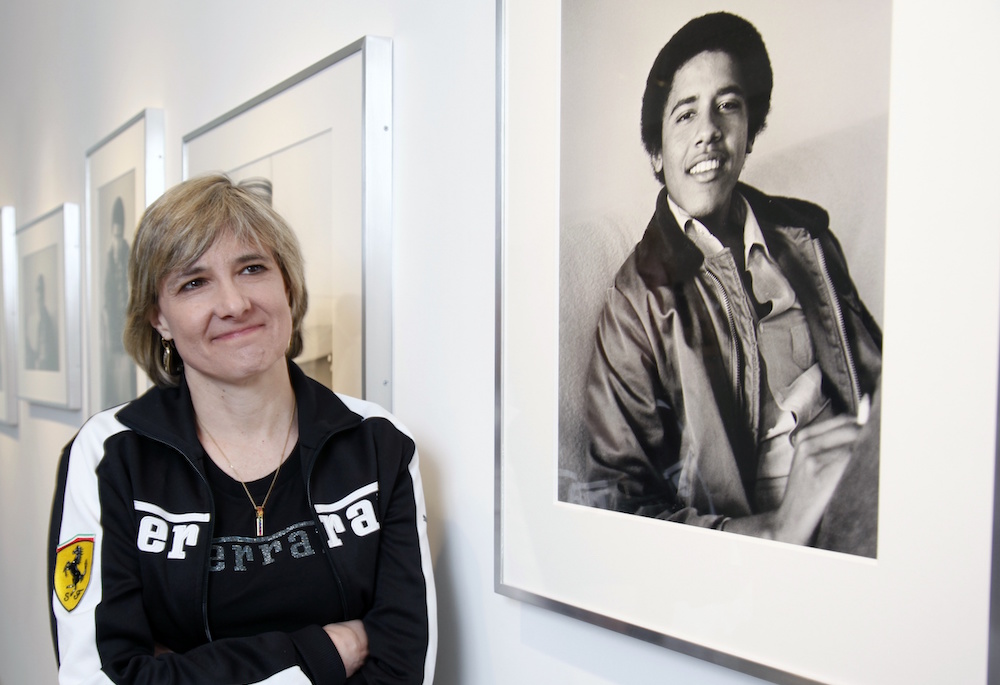 In this 2009 image, photographer Lisa Jack poses with her photos of "Barack Obama The Freshman" taken during the year he lived in Pasadena and attended Occidental College. Photo by Damian Dovarganes/Associated Press.

I recently learned that, in the second grade, I was part of presidential history.

Every morning during the 1980-1981 school year, I walked the five blocks between my family’s home in southwest Pasadena and Allendale Elementary School, where I was in Beverly Thomas’ class. Sometimes I went back in the evening to play in the Little League at Allendale Park, adjacent to school.

The round trip seemed unremarkable then, as I passed homes and dumpy apartment buildings. But just last month, my hometown of Pasadena announced that my path had crossed with greatness. The city installed a plaque on the sidewalk outside one of those dumpy apartment buildings I used to pass—an ugly place at 253 Glenarm Street. The plaque explains that an Occidental College sophomore occupied one of the apartments in 1980 and 1981.

The occupant’s name was Barack Obama.

This revelation—that the president of the United States was once my neighbor—might seem trivial. But it has had a powerful impact, making the California news and drawing a crowd of more than 200 people for the plaque’s December dedication. Seizing on this public relations momentum, my own state senator, Anthony Portantino, has proposed renaming a portion of the 134 Freeway, connecting Pasadena with Glendale, the “President Barack H. Obama Freeway.” 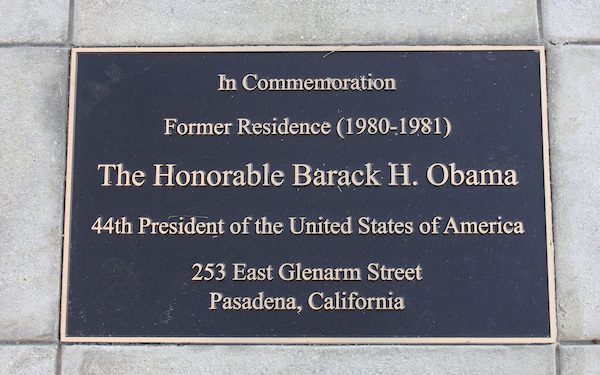 A plaque is seen in front of the Pasadena residence where Barack Obama lived during his sophomore year at Occidental College. Photo by John Antczak/Associated Press.

I still live less than two miles from the sidewalk plaque, and coach my kids in the same Little League where I played. And so, while I’m not a big fan of the president, I’ve found myself stopping at least a half dozen times to see the plaque over the holidays. The draw is some combination of childhood nostalgia and the deliciously incongruous 21st century updating of the president-from-a-log-cabin story. Plus, I’m never alone—there always seem to be other curious locals in front of the otherwise forgettable apartment building.

But I must confess I also find the plaque—and my own interest in it— embarrassing, in an “Aren’t we behaving like small-town hicks?” sort of way. And, for the record, I felt that embarrassment even before my in-laws, visiting from Chicago, a city somewhat familiar with the president, made fun of the plaque when I took them to see it.

Obama, after all, left us as fast as he could, transferring from Occidental to Columbia University in New York City after that sophomore year. And the plaque is the product of a conversation between Obama and a city councilman in which the president said he’d loved Pasadena—but could only remember that the street he’d lived on started with a G. (A search of phone directories and utility records identified the address, according to the Pasadena Star-News).

So why is my hometown holding so tightly to such a thin connection to a president? There’s our strong commitment to celebrating African-American history in a city with one of California’s oldest African-American communities (Jackie Robinson grew up in Pasadena). It’s also understandable that Californians are clinging to a president for whom we voted twice, particularly at a time when we’re confronting a president-elect that most of us see as a threat to the republic.

But that doesn’t justify our state’s lack of caution in celebrating Obama so robustly and so quickly, even before he leaves office. There are already two schools named for Obama in Los Angeles, and another in Oakland; more are likely on the way. The town of Seaside, near Monterey, gave its Broadway Avenue a second name—Obama Way—six years ago. And scientific researchers even named a lichen they discovered in the Channel Islands after the president. (The fungus is officially called Caloplaca obamae).

Such celebrations seem excessive because the president hasn’t exactly reciprocated them. The president didn’t dote on California with half the passion Bill Clinton once did. Obama came to our state mostly to raise money and play golf. And he didn’t always have our best interests at heart. He attacked Silicon Valley for not collaborating with his administration on mass surveillance of questionable legality. He turned down our recession-era requests for financial assistance that would have prevented the worst of the state budget cuts. And he deported an awful lot of our undocumented neighbors. 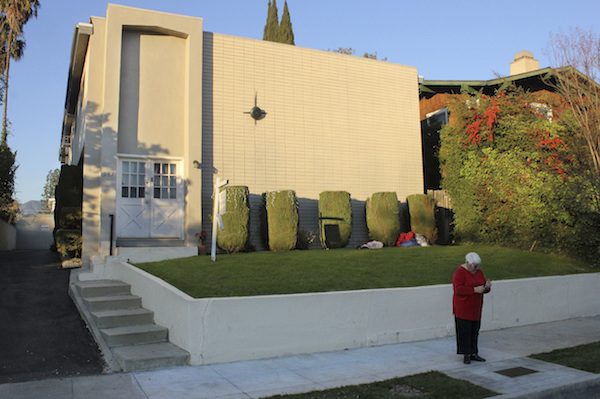 A woman takes a picture of the plaque in front of the Pasadena residence where Barack Obama lived during his sophomore year at Occidental College. Photo by John Antczak/Associated Press.

At the very least, high honors for this president should be seen as premature. It’s always dangerous to name things after living people, and he is just 55 years old, with—potentially—decades to screw up his reputation here. Depending on what his successor does, Obama’s legacy may soon seem rather ephemeral.

So why not hold off on renaming more schools or roads for him?

Yes, the stretch of the 134 Freeway in question is near Obama’s alma mater. But that’s too big an honor for a guy who spent such little time here in his youth—and was here only long enough to tie up traffic as an adult. It’d be more appropriate to name that bit of freeway for Mildred Pierce, the title character of the novel and 1945 film noir, whose daughter, a bratty social climber, dreams of leaving drab Glendale for higher social status in Pasadena. (Perhaps the president, who loves film and literature, might prefer that as well).

In spite of that note of caution, I must confess that I feel differently about the sidewalk plaque in my old neighborhood. Yes, the plaque—or, as some of us locals prefer to call it, the Obama Monument—is hokey. And yes, if you have friends from Pasadena, you may have to get used to us bragging that Obama was once our homie.

But I say we swallow our pride and keep the plaque (and maybe even have T-shirts made). It’s a sweet little reminder that sometimes history is hiding just around the corner, and living in a really shabby apartment.