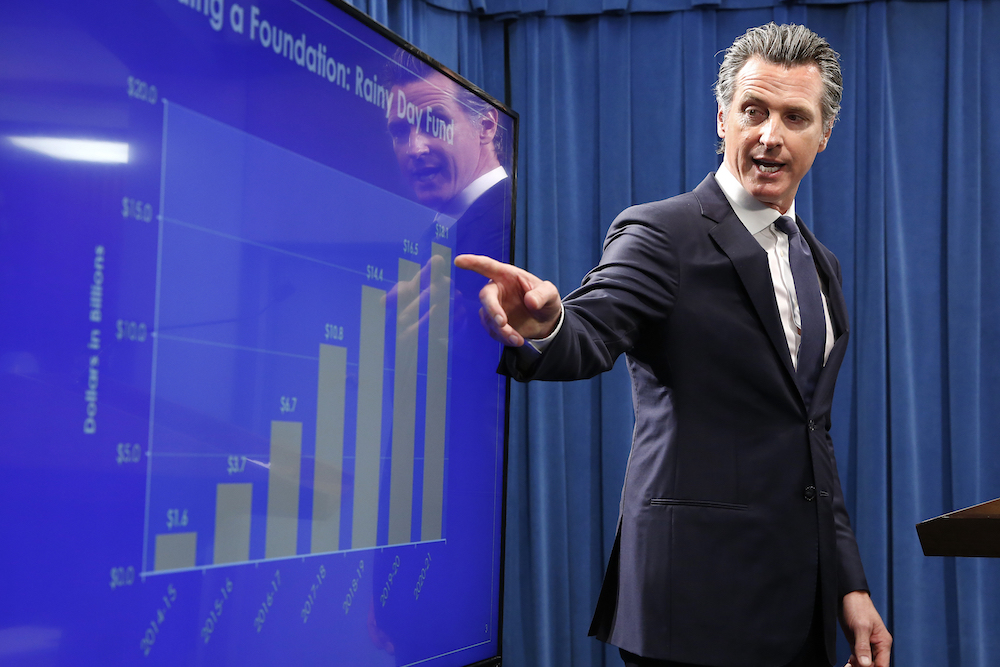 California Governor Gavin Newsom gestures to a chart showing an increase in funding for the state's rainy day fund during a 2019 news conference. Courtesy of Rich Pedroncelli/Associated Press.

OK, as a budget fund without acting credits, I shouldn’t expect Greta Gerwig to put me in her next film—even if both she and I are Sacramento natives. But the time is coming—quite quickly—when I, California’s humble Rainy Day Fund, will stand at the center of our state’s civic stage, and my fellow Californians will finally have to pay me the attention I deserve.

I’ve had to stand on the sidelines for the past decade, like the kid ignored on the edge of the dance floor, while Californians partied through one of the longest economic expansions in our history. Yes, it’s true that this expansion made me a billionaire many times over—in fact, if I were human, I’d rank right between Elon Musk and Laurene Powell Jobs on those business magazine lists. But my real time is the bad times.

Oh, and look, what do we have here? The coronavirus and a monster stock market crash! Do I smell a recession and a huge drop in tax revenues? Because that’s my cue!

My role is to be the adult fund in the room, holding onto my cash instead of spending it constantly, like the thousands of other state government funds do.

I have to be stable and dependable because you Californians are so crazy and volatile. Your incomes, your business receipts, and your investment earnings go up like rockets and down like, mmm, bad rockets, which then open up giant holes in the state budget. And it’s my job to rush in with the funds I’ve been holding onto and plug those holes.

But I must confess to being a bit nervous about the hole-plugging, because, well, I’ve never done this before.

Yes, Prop 58 created me in 2004, but in that decade, I was so empty that there was nothing in me for the state to tap when the Great Recession hit. In 2014, voters took steps to enhance me via Prop 2, and ever since, I’ve been filling up with money.

But I’ve never had my funds drawn down in an economic downturn. I’ve been sitting on the shelf so long—like an old can of soup or a two-term vice president—that no one can be sure I’ll be able to do the job when I’m needed. Can I really prevent teacher layoffs, shore up Medi-Cal, or provide money fast enough to slow down a pandemic?

Few people, in fact, even know how I really work. Even my former significant others will tell you that, while I always insisted that I was truly there for them in our relationships, they eventually found me too complicated.

I have to be stable and dependable because you Californians are so crazy and volatile. Your incomes, your business receipts, and your investment earnings go up like rockets and down like, mmm, bad rockets, which then open up giant holes in the state budget. And it’s my job to rush in with the funds I’ve been holding onto and plug those holes.

For one thing, while I’m called the Rainy Day Fund, I actually encompass more than one account. Most of my billions are in what is called the Budget Stabilization Account, but I also have a few billion in the Special Fund for Economic Uncertainties and the Safety Net Reserve. The Public School System Stabilization Account is also part of me, but there’s not much in it, with education instead depending on local school district reserves. (Good luck with that, kids!)

Like so much else in California, I’m governed by formulas. The gist of me is that I’m supposed to get 1.5 percent of the state’s general revenues each year; I also store away more money during stock market booms, when capital gains tax revenues peak.

My success in storing money has really surprised the state. Back in 2014, when I was enhanced by the voters, the best guess is that I would be very small, gathering maybe $1 billion a year. But I’ve grown at more than three times that rate, making me as swole as Schwarzenegger before he went into politics. Today I’m worth around $20 billion.

Why did I get so big? Governor Brown and Governor Newsom figured out that I was a great place to put money—and so they have put more money into me than required. They had their reasons. First, when you make a deposit into me, it’s easier to balance the budget, because of the way the budget formulas are written. Second, governors love the fact that the legislature has so little power to access my funds. For the state to get at my money, the governor has to declare a state of emergency. So the bigger I am, the more leverage a governor has over the legislature!

Governors also liked the fact that putting money in me made them seem fiscally prudent—giving them cover for new spending in other areas. And my badge of fiscal prudence is one of my finest features: Some think I singlehandedly restored California’s credit ratings. I’ve created a culture where the budget cool kids in Sacramento have arguments over how to most rapidly pay down debts.

In recent years, the biggest controversy about me has been whether I’m too big—and whether I should be tapped to handle urgent needs like homelessness, housing, and health care.

But, as the economy takes a bad turn, I’m steeling myself for contention—maybe even struggles and fights. I fear that, as huge as I am, I won’t be able to handle a bigger recession, which could cost the state revenue of $100 billion or more over four years.

Even if we have just a teeny tiny recession, the rules for tapping my dollars are arcane and untested, and there are competing legal opinions about who they would work. For example, if state revenues collapse over a coronavirus cliff and abruptly go down $20 billion this year, the rules suggest that only half my money—$10 billion maybe—could be tapped to fill the hole in one budget year. The other half of the hole would have to be made up with budget cuts or tax increases.

One reason I’m writing this is to manage expectations, and to let you know that I can’t handle an economic crisis alone. I need the help of California and its lawmakers, who should start making budget plans for a recession right now.

At the very least, they should redesign me for the future, so that I might be more easily and quickly used in an abrupt or dramatic downturn, like the one we’re about to go through. I also should be allowed to grow bigger during good times, and thus provide more of a cushion during bad times.

In other words, while I’ll be there for you, I can’t do everything for you. You have certain obligations from which you can’t run.

And my presence should keep reminding you of those obligations. To quote a favorite movie of mine, Fatal Attraction, I am not going to be ignored.