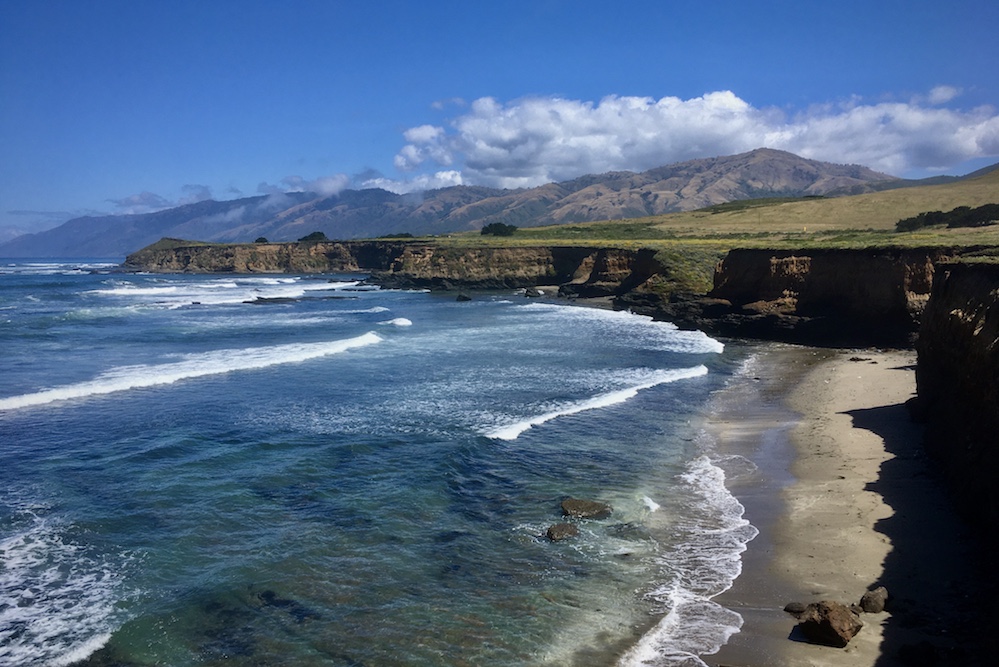 SLO down, California. Even in pandemic, you move too fast.

This new year, perhaps we should all resolve to model the spirit of SLO, the acronym that embodies San Luis Obispo, perhaps the easiest place in California to catch your breath and get a little rest.

SLO has been central to my own coping strategy during this miserable COVID year. Whenever work pressures or distance learning horrors or home confinement makes our family feel like we’re going insane, the five of us take our 2006 Toyota Scion three hours north from L.A. to some empty and beautiful spot in that empty and beautiful county. So far, we’ve taken five short SLO breaks of three or four days each.

In pursuing this strategy of escape, we’ve been exploiting not only extreme pandemic discounts on lodging, but also a geographic and metaphorical truth about California. The Golden State is loudest and most exhausting at its extremes and on its geographic edges, where most Californians live. If you want to find more room, and a little solitude and peace, you should look to the state’s middle.

The paradox of San Luis Obispo County is that it feels like a place apart precisely because it’s centrally located. The Cal Poly historian Daniel E. Krieger called it California’s “Middle Kingdom,” with a nod to Tolkien. In this Middle-earth, both San Francisco and L.A. hold sway but neither dominates; electricity comes from PG&E in the north, and gas from Southern California Gas.

And this middle identity runs deep. San Luis Obispo was the middle mission in the chain of Franciscan missions, and the place where coastal rail links to the north and south finally met in 1901. SLO also takes middling pride in having invented the motel in 1925, with the opening of the Milestone Mo-Tel, which served middle-class vacationers who couldn’t afford finer lodging but wanted a cheap place to stop and sleep on long coastal drives. (Eventually renamed the Motel Inn, it closed in 1991, but there are plans to redevelop the site with guest rooms and a restaurant.)

The paradox of San Luis Obispo County is that it feels like a place apart precisely because it’s centrally located.

Today, San Luis Obispo County retains a decidedly middle-class vibe, amidst the rich-and-poor extremes of 21st-century California. SLO incomes are a little lower and costs, while still too high, are less than in many other parts of the coast. Its politics, while trending left, are middle of the road by California standards.

While SLO County may be small in people—with just 283,000 residents, or about as populous as the San Diego suburb of Chula Vista—it retains a big sense of itself. In recent weeks, its elected officials and media protested the state’s new stay-at-home order, which put the county in the “Southern California region” along with counties as distant as Riverside and Imperial. The San Luis Obispo Tribune editorialized, with fervor unusual for SLO, that “If Gov. Gavin Newsom doesn’t want a full-scale rebellion,” he’ll recognize the Central Coast as its own region.

Most of the time, San Luis Obispo, rather than a place for revolt, is an escape from the permanent revolutions of life in our urban regions. I’ve loved the place since childhood, when my family stopped there on frequent drives from the San Gabriel Valley to see my grandparents in the Bay Area. As an adult, I’ve dreamed of vacations on the super-cool SLO coast during hot L.A. summers, but summertime SLO hotel and motel prices were too much for a nonprofit journalist. Until the pandemic hit.

We first snuck away one sweltering July week when it was 100-plus in Southern California, and 62 on a hill outside Cambria, where a motor lodge with summer rates often above $400 a night was offering rooms for $99. Social distancing was easy—the lodge didn’t have indoor hallways, and there was hardly anyone around, making it far more COVID-safe than our dense L.A. County community. Even just a few days there felt restorative—mental health therapy far cheaper and more effective than any shrink.

We certainly haven’t become SLOcals. We don’t drink wine or have a taste for olallieberries. And try as we might, we don’t quite understand the boomer-vs.-millennial debate over whether this glorious place should be called “San Louie” or just plain SLO.

But we’ve come to appreciate the different worlds of the Middle Kingdom. There’s no denying the sun-splashed beauty of the Five Cities area (from Pismo Beach to Oceano), and the pleasures of splashing in the creek that runs under downtown San Luis Obispo, before emerging at Mission Plaza. I’ve been so impressed by Cal Poly, an unfussy educational treasure with the best graduation rates in the Cal State system, that I dream of sending my science-minded oldest son there.

Still, those are all South County places, and we’ve learned that we prefer to spend time “over the grade”—that is, above the steep Cuesta Pass that divides North from South in SLO. We’re partial to the North County’s oak trees and gardens, to drives along Highway 46, to the Mexican food and mini-golf in Atascadero, and to the cookies and coffee in Cambria.

For me, the least stressful day of a very stressful 2020 came on the cold late summer afternoon when I left my wife to her work and the kids to online lessons, and walked alone for a couple miles along the beach at San Simeon State Park. My eyes delighted in the landscape—looking over the coast, out to sea, and then up at Hearst Castle, closed for COVID. For two hours, in the middle of California, this middle-aged newspaperman didn’t see a single other person, and imagined the Middle Kingdom was his own.

I walked as SLO-ly as I could.