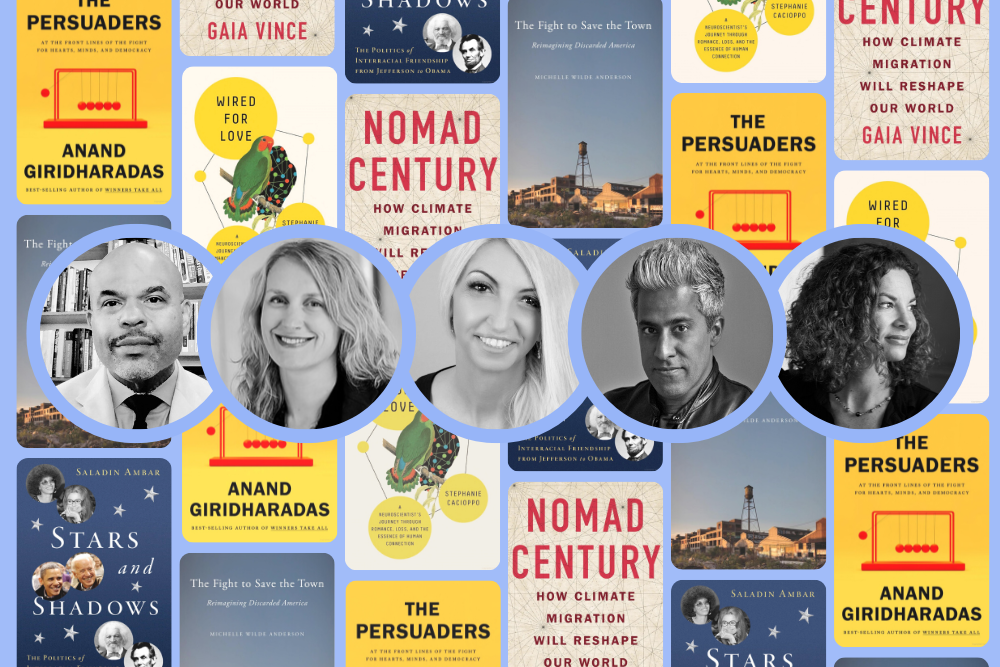 The books shortlisted for the 2023 Zócalo Book Prize address five of the most urgent issues of our current moment: racial inequality, economic inequality, the struggle for human connection, political polarization, and climate change.

Since 2011, Zócalo has honored the author of the nonfiction book that best enhances our understanding of community and the forces that strengthen or undermine human connectedness and social cohesion. This year, the Zócalo staff selected our shortlist from 183 titles submitted by publishers and authors on a broad range of subjects, including biographies (of a diverse group of people, as well as of the city of Jerusalem and of the U.S. national anthem), personal histories (that journeyed from antebellum Tennessee to 21st-century Los Angeles), and explorations of meteorites, the banjo, clothing, and reality TV.

We’re delighted to recognize the authors of these shortlist titles, who come at our central concern from different fields and perspectives:

• Saladin Ambar, Stars and Shadows: The Politics of Interracial Friendship from Jefferson to Obama

• Michelle Wilde Anderson, The Fight to Save the Town: Reimagining Discarded America

• Stephanie Cacioppo, Wired for Love: A Neuroscientist’s Journey Through Romance, Loss, and the Essence of Human Connection

• Anand Giridharadas, The Persuaders: At the Front Lines of the Fight for Hearts, Minds, and Democracy

Zócalo will announce the winner of the Zócalo Book Prize in February 2023. This year’s winner will receive $10,000, deliver a lecture on their book, and take part in a live interview in the spring at the ASU California Center in Los Angeles. (And they’ll be in very good company; see our previous winners here.)

Zócalo is grateful to screenwriter and philanthropist Tim Disney for his continuing sponsorship of our annual literary prize program, which also includes the Zócalo Poetry Prize, which is accepting submissions for original poems through January 23, 2023.

Our past winners are:

• Heather McGhee for The Sum of Us: What Racism Costs Everyone and How We Can Prosper Together (Penguin Random House)
• Jia Lynn Yang for One Mighty and Irresistible Tide: The Epic Struggle Over American Immigration, 1924-1965 (W. W. Norton & Company)
• William Sturkey for Hattiesburg: An American City in Black and White (Belknap/Harvard University Press)
• Omer Bartov for Anatomy of a Genocide: The Life and Death of a Town Called Buczacz (Simon & Schuster)
• Michael Ignatieff for The Ordinary Virtues: Moral Order in a Divided World (Harvard University Press)
• Mitchell Duneier for Ghetto: The Invention of a Place, the History of an Idea (Farrar, Straus and Giroux)
• Sherry Turkle for Reclaiming Conversation: The Power of Talk in a Digital Age (Penguin Press)
• Danielle Allen for Our Declaration: A Reading of the Declaration of Independence in Defense of Equality (Liveright Publishing)
• Ethan Zuckerman for Rewire: Digital Cosmopolitans in the Age of Connection (W. W. Norton & Company)
• Jonathan Haidt for The Righteous Mind: Why Good People Are Divided by Politics and Religion (Pantheon)
• Richard Sennett for Together: The Rituals, Pleasures and Politics of Cooperation (Yale University Press)
• Peter Lovenheim for In the Neighborhood: The Search for Community on an American Street, One Sleepover at a Time (Perigee Books)