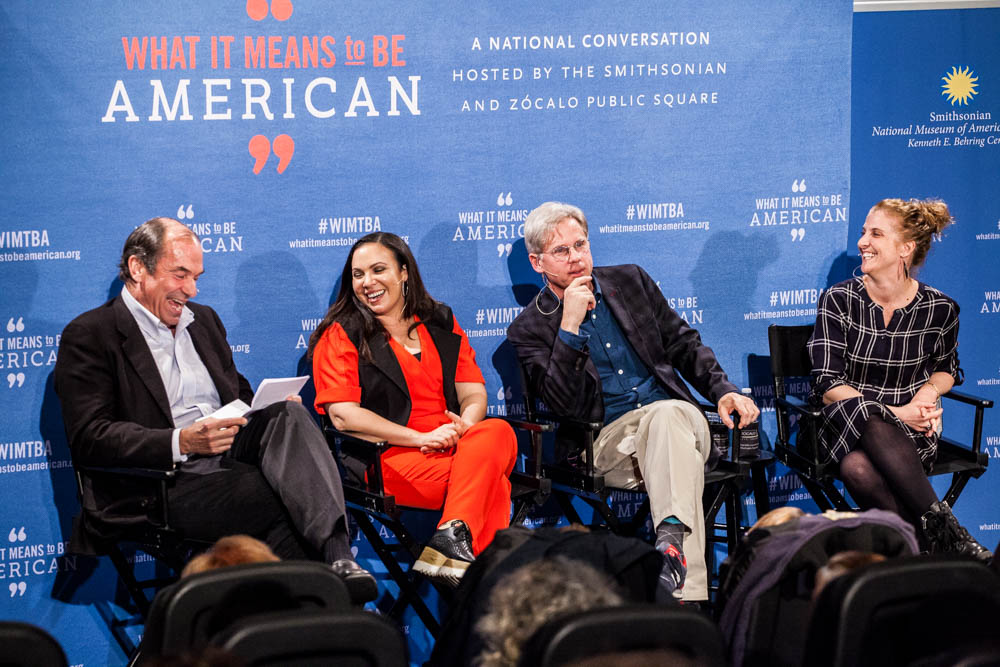 “Can television bring America together?” asked writer John Bowman, the moderator of a panel posing that question. He immediately answered his own query with, “God knows I’ve tried.” And so began a lively and engaged conversation between Bowman and several other writers and creators of television shows that have challenged traditional cultural and social boundaries.

The discussion, before a full house at a Smithsonian/Zócalo “What It Means to Be American” event at the Landmark Theaters in Los Angeles, explored both the opportunities and the obstacles in trying to bridge seemingly vast cultural divides via TV.

Bowman, an Emmy award-winning writer and creator of Martin, described his experience in 1995 as “the white head writer of a black show” called The Show. “I wanted to explore racial issues in an integrated show,” he said. “It was the best reviewed show I ever wrote, and it was canceled after four episodes.” At a subsequent focus group, he recalled, a white respondent and a black respondent bonded over their dislike of the show and wound up hugging. Small comfort, Bowman said. “I had brought black and white together in their hatred of my show.”

The trick, said Dan O’Shannon, former executive producer of Modern Family, is to find a way to create relatability without “condescension and preachiness.” When the show first aired, in 2009, much of television “was divisive, about making fun of the other side.” In crafting the story line for Cam and Mitch, the gay couple on the show, the writers intentionally avoided physical intimacy in the first season, O’Shannon said. “We wanted to have Americans embrace them as empathetic human beings first and as a gay couple second.”

Jennie Snyder Urman, Jane the Virgin showrunner, concurred, saying it’s important to understand every character, “from the most evil villain to the family unit at home.” Empathy, she said, is “the catchphrase in the writer’s room,” with scripts given a painstaking review from every character’s point of view.

Portraying characters honestly, even when it’s unflattering, is essential, said, Gloria Calderón Kellett, co-showrunner and executive producer of Netflix’s One Day at a Time. When the teenage daughter on that show came out as gay, her father refused to dance with her during the traditional father-daughter dance at her quinceañera.

Why portray the father in that light? Bowman asked.

“We wanted to let the audience know that she was going to be supported and be okay, but maybe not everyone was going to have that perfect, warm response to it,” Calderón Kellett said. “It wasn’t just hurray, she’s gay! We wanted to represent the totality of that experience.”

All of the writers on the panel—as in much of television itself—Bowman observed, had worked on shows revolving around families struggling with the deepest social and cultural questions of the day. “In TV history, the family is always the crucible of social issues,” Bowman said. “It’s where we talk, it’s where we tolerate.”

“In TV history, the family is always the crucible of social issues,” Bowman said. “It’s where we talk, it’s where we tolerate.”

The holy grail of placing family at the heart of television’s efforts to sort through social divisions is the 1970s Norman Lear sitcom All in the Family, Bowman said. That ground-breaking show succeeded in provoking thought and conversation among non-like-minded people. But, said O’Shannon, at that time there were just a few networks competing for viewers’ attention, and even if they offended some viewers, others would tune in “to see what this car wreck was about.” Now, he said, with much greater competition, no one wants to offend because they can’t take the risk of “losing a single viewer.”

What then, is the way forward, asked Bowman, citing as an example of the vastness of the divide one recent survey that found that the favorite television show among liberals was Modern Family, and among conservatives Duck Dynasty. He specifically wondered whether in this moment where audiences place a premium on authenticity, his whiteness would be an obstacle. He posed the question to Urman, who is white and whose protagonists are Latino.

Urman said that initially she did question whether she should embark on the show, but then, she said, she realized that, “I spent all of my career writing men. I’m a lot closer to Jane,” the show’s heroine, who she described as “type A with a very complicated relationship with her mother.”

The key, Urman said, is “being open, listening and making sure that your family is so specific that they are not caricatures. We all want the same thing: We want happiness, we want love, we want to be respected.”

One of the big challenges, the panelists agreed, is in fairly portraying “red” characters—those with conservative values—without relying on the buffoonery of an Archie Bunker, for example.

Jay, the grandfather on Modern Family presents one such opportunity, said O’Shannon. “Jay spent his whole life following rules. Everything he was taught was okay is bad, he’s the bad guy now,” O’Shannon said. “I don’t know if you forgive him for some of the things he does, but you understand him.”

During the question-and-answer session, one audience member asked whether the writers worried that when they presented their characters’ flaws they were disrespecting them, suggesting that viewers might extrapolate negative stereotypes about them.

Urman agreed. “Our characters mess up all day every day,” she said. “If we just made these characters that are perfect, then they have no relatability.” 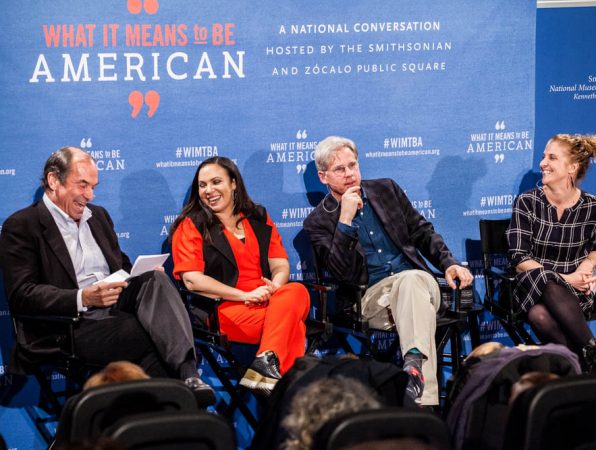 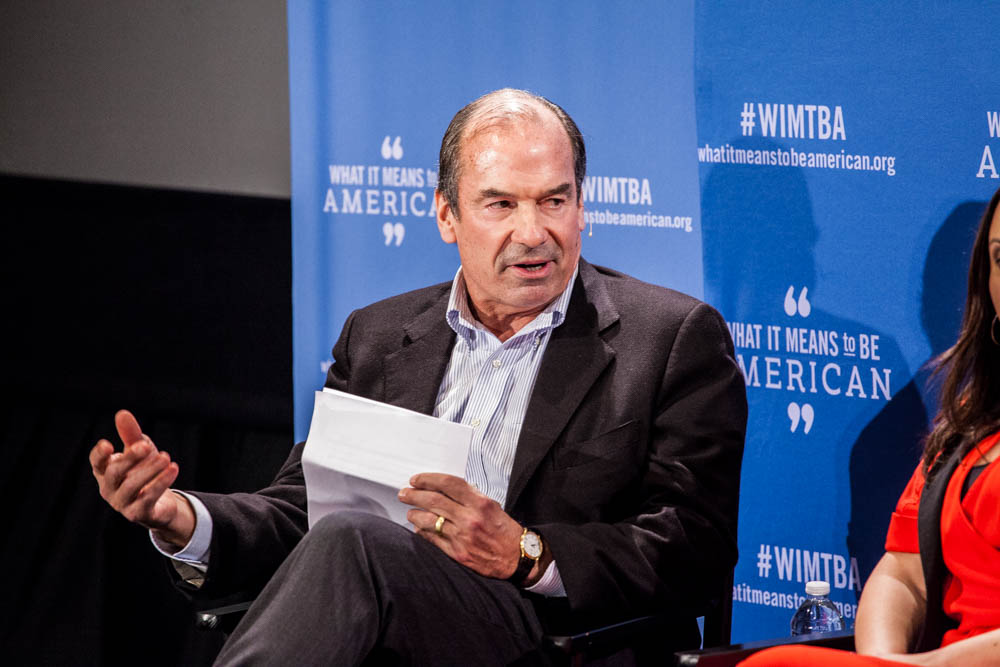 A packed house at Landmark Theaters. 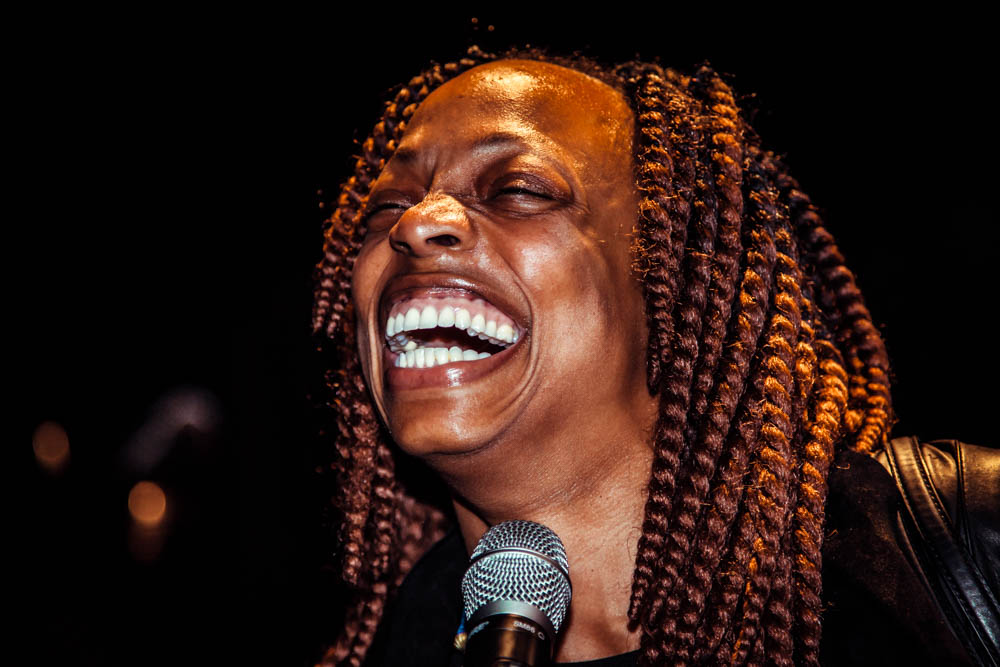 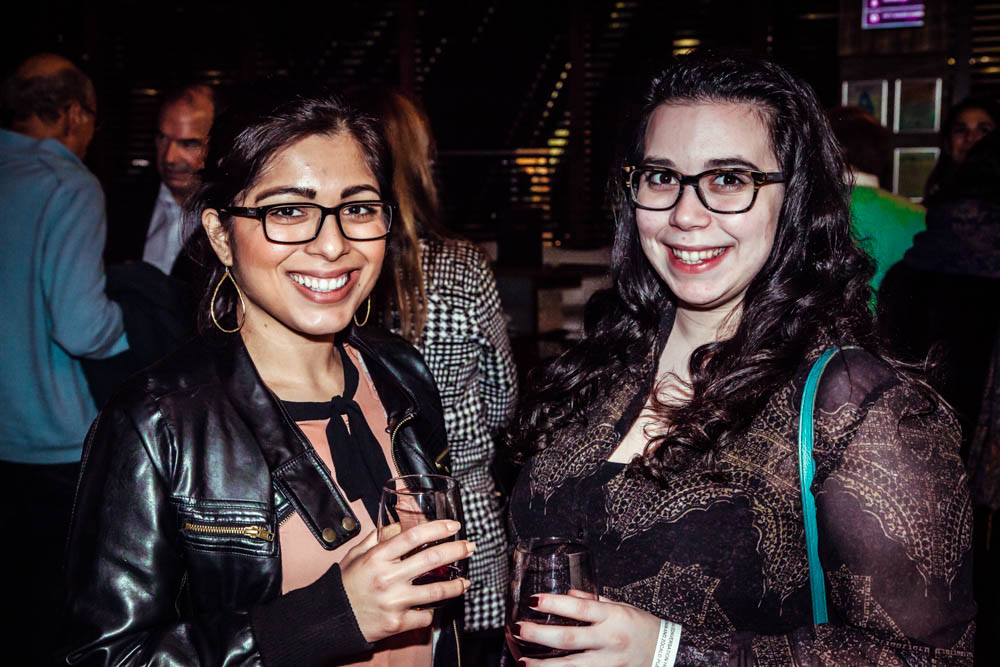 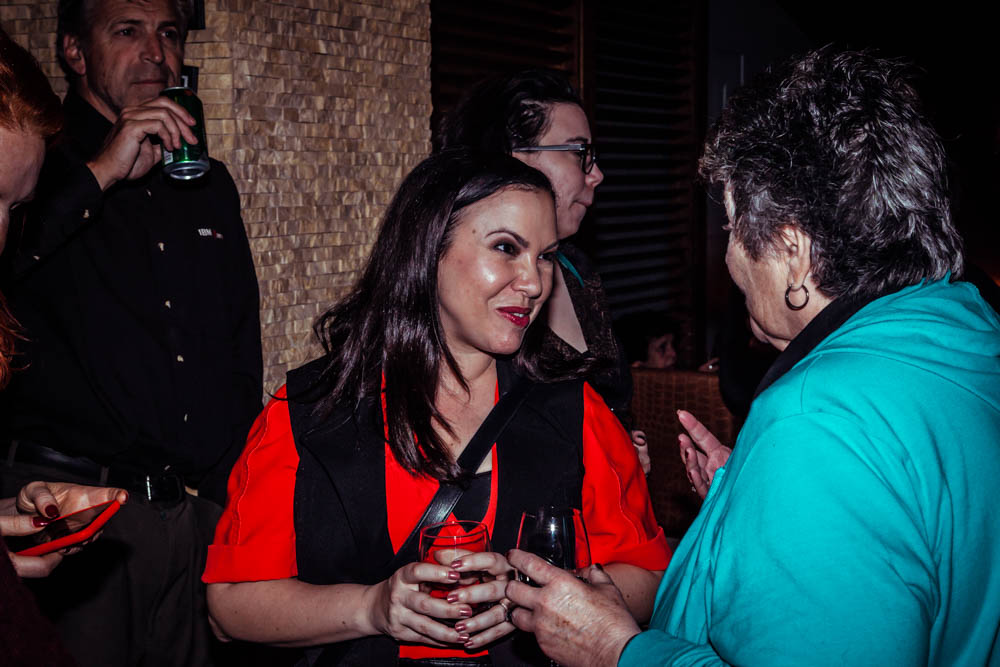 Gloria Calderón Kellett, co-showrunner and executive producer of Netflix’s One Day at a Time, speaks with guests at the reception.