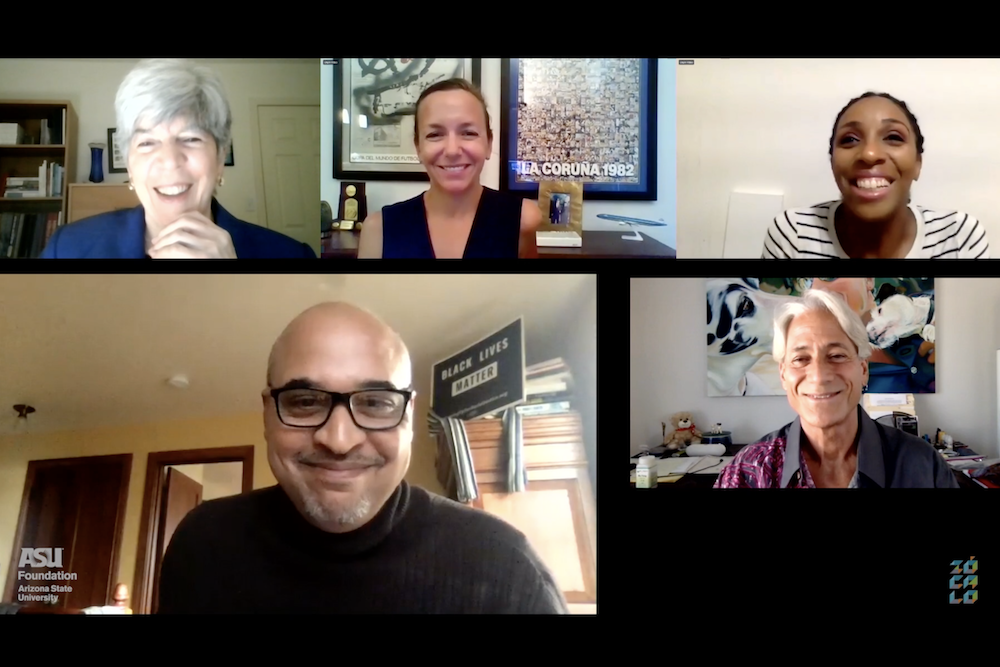 The Olympic Games need to overhaul their governance and give more decision-making power to athletes if they are ever going to address their many failings, from the costs they impose on hosting communities to a lack of equity in participation, said panelists at a Zocalo/ASU Foundation event Thursday night.

The event, streamed online over multiple platforms and titled “Can We Build A Better Summer Olympics?” featured four accomplished athletes, two of them Olympic medalists, who have gone on to varied roles that touch on the Games—a sports historian, the leader of a major women’s group for equity and sports, and advocates for LGBTQ people and anti-doping reform.

The hour-long discussion encompassed an Olympic-sized array of the Games’ challenges and failures—including militarization and state violence at the Games, policing abuses, the use of Games by dictators and authoritarians, their high costs for host cities, doping, displacement of people for the Games and Olympic facilities, lack of access to the Games, and deficiencies of the International Olympic Committee and other governing bodies.

Much of the discussion focused on ideas for changing the Games; the event also included nine short videos submitted by current and former Olympians offering their suggestions for the Olympics—ranging from changing the judging of boxing to leaving behind more useful transportation infrastructure after the Games.

The event’s moderator, New York Times sportswriter Kurt Streeter, started the discussion by recalling his time covering the 2016 Summer Olympics in Rio de Janeiro, where he reported on the favelas, or slums, in the hills above venue for the Games. Those neighborhoods were full of security people with large guns, he said.

“It was interesting to see the level of policing,” in the favelas, Streeter recalled. “The crackdown was immense. The people I spoke to were fearful… They also felt completely cut off from the Games,” which in some cases were less than a half-mile away from where they lived.

In response, sports historian Victoria Jackson, of Arizona State University, noted that the origins of the Games, more than a century ago, were rooted in white supremacy. And the militarization that Streeter observed is a phenomenon dating to the 1968 Summer Games in Mexico City, which occurred during a summer of demonstrations against Mexico’s ruling party. Shortly before those Games, government forces—police and military—opened fire on a protest in the capital’s Tlatelolco area, leaving a death toll that is still in dispute. Some accounts estimate that hundreds were killed and thousands beaten and jailed.

Jackson suggested that after 1968, the Summer Games in 1972 and 1976 created a militarization and security around the Games that has become entrenched. She also argued that the Olympics themselves have resisted change—in part by limiting the voice and rights of Olympic athletes, who are young and people who would be most likely to improve the Games.

Another panelist, the Olympic diving gold medalist Greg Louganis, suggested that more care and deliberation should be taken in the location of the Games. Instead of opening up the Games to bids, he suggested that the Olympics establish a few home sites—maybe two for the Summer Games, and two for the Winter Games—and alternate between them.

That would reduce the costs, displacement, and the environmental and climate impacts that come with the extensive new construction every host city must take on. Instead, Olympic facilities could be used for multiple games and for training and research between Games, he said.

Louganis also said that establishing home sites would allow the Olympics to avoid chasing dollars and accepting bids from countries with authoritarian governments and poor human rights records. He recalled traveling to Russia around the time of the 2014 Winter Games in Sochi, where an anti-LGBTQ law put athletes and attendees at risk.

“Why are we going to back to a lot of these countries with abysmal human rights practices?” he said. “I’d like to see three or four Olympics venues, so you don’t have the bidding.”

In the online chatroom on the YouTube stream, some audience members expressed opposition to holding the 2028 Olympics in Los Angeles, without a public referendum to confirm support. They expressed outrage at potential impacts of those Olympics, from displacement of people for Olympic-related projects to the danger to immigrants from the planned security presence of the U.S. Department of Homeland Security, which handles mass deportation and other immigration enforcement. Some questioned how profits from the 1984 Olympics, held in L.A., have been spent.

Olympic hurdler Lashinda Demus, who was only a year old during the 1984 Olympics, recalled that when she was growing up, the Games felt distant to her—even though she learned to ride her bicycle in the parking lot of the Coliseum, which hosted the Games in 1932 and 1984.

She said the Olympics need to do more to support athletes—and free up athletes to find sponsors so more of them can support themselves. While she said that the Games are one of the few spaces where there is equality among athletes, Demus, who is African American, recalled having difficult experiences while traveling to international events because of her race, and that, as a woman, finding sponsors to make an Olympic career possible was difficult.

“Being a good athlete is never enough when you’re a woman. You have to have this great story,” said Demus, noting that she got some attention and support because she is the mother of twins.

Panelist Donna Lopiano, a softball star who became CEO of the Women’s Sports Foundation, backed up Demus’ sense of having less opportunity as a woman with statistics. The Olympics fall far short of gender parity by all kinds of measures, she said—from the number of medals and sports offered, to the number of female officials.

“The Games are given to autocratic leaders because they are so expensive,” she said. “It’s not a democratic choice to spend all this money on the Olympics. And who is ill-served? It’s the poorest people in those countries.”

Jackson, the historian, suggested three changes in the Games. First, she would eliminate Rule 40 of Olympic Charter, which limits the ability of athletes to market themselves and mention sponsors who are not Games sponsors. Second, Rule 50, which prohibits political, religious, or racial expression by athletes, should be repealed. Third, there should be rules requiring male-female equity; if a country doesn’t support a women’s team in one sport, she said, its men shouldn’t be able to compete in that sport.

With economic and political freedom, Jackson said, athletes could advocate powerfully to make the Games better, not just for themselves but for the communities they impact. The existing restrictions on expression and athlete freedom are “inhibiting the potential of the Games.”

In response to questions from audience members, who watched on YouTube and Vimeo, the panelists discussed whether the Games are simply too big, how Black Lives Matter might impact the games, and why doping remains such a problem. Demus noted that a Russian athlete, who won the 400-meter hurdles in the 2012 Games when she took the silver, now faces an arbitration hearing on doping, adding that the Olympics need to figure out what to do for competitors who are victims of doping.

Despite the daunting problems facing the Olympics, the panelists closed the evening on an optimistic note. They said that the recent global protests against racism and police violence had seen prominent athletes, who once shunned political participation, speaking out for change.

“I don’t think we can do anything until the athletes get in power,” said Lopiano, who then added that protests suggest that moment of power is approaching. “We’re seeing this flower open up in front of us.” 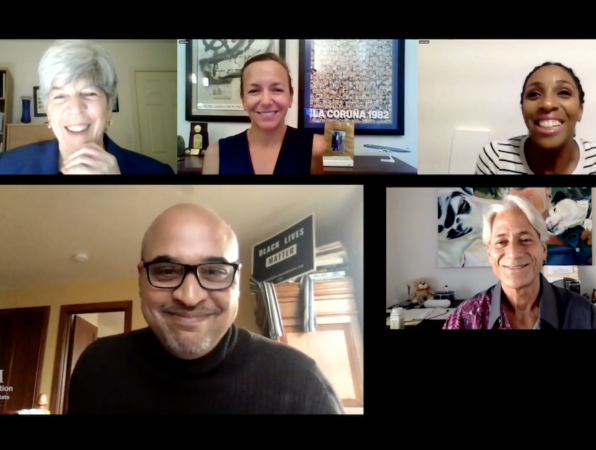 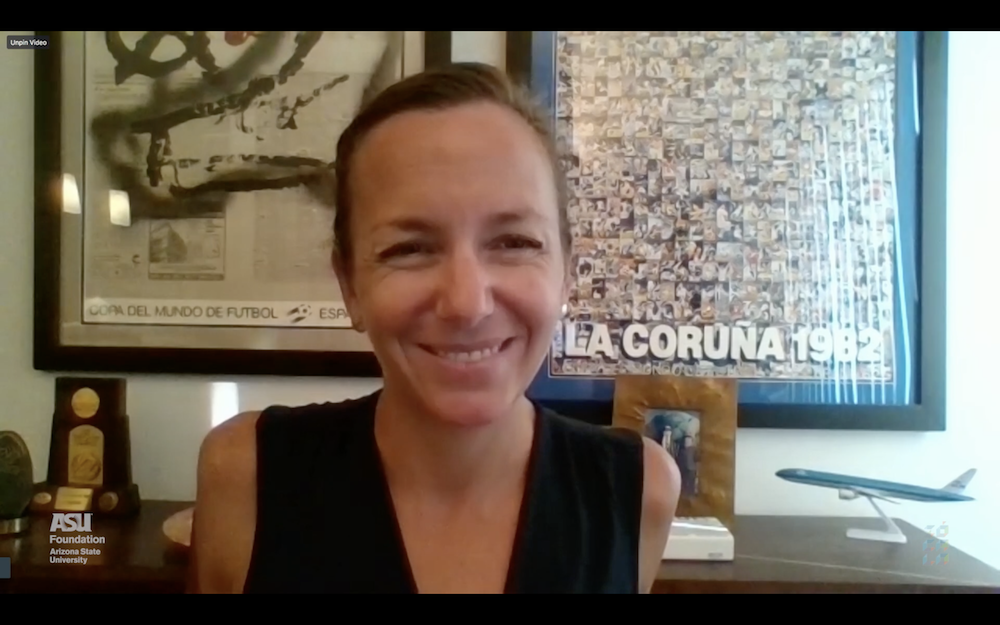 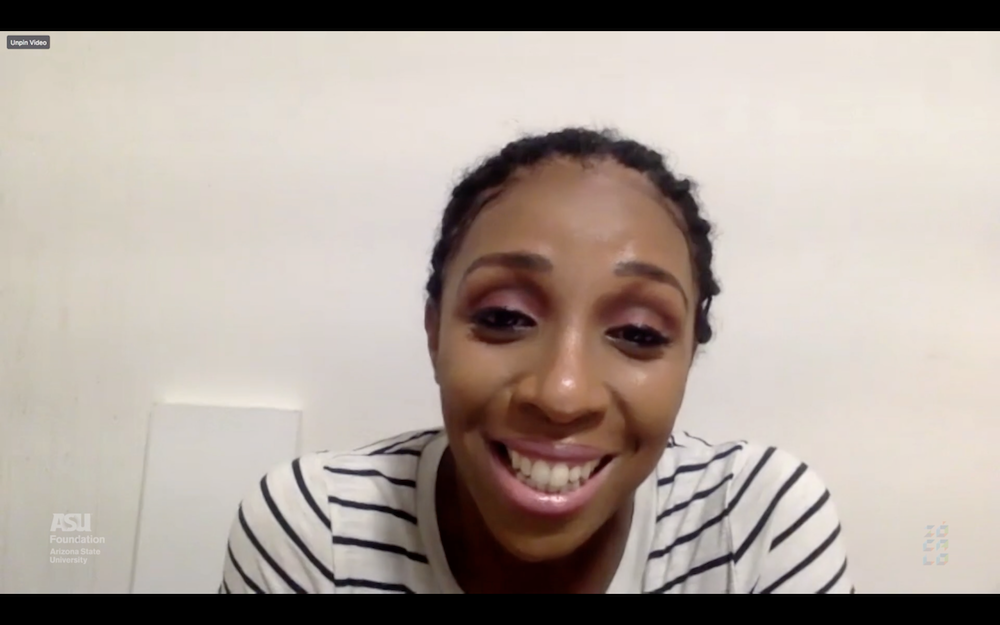 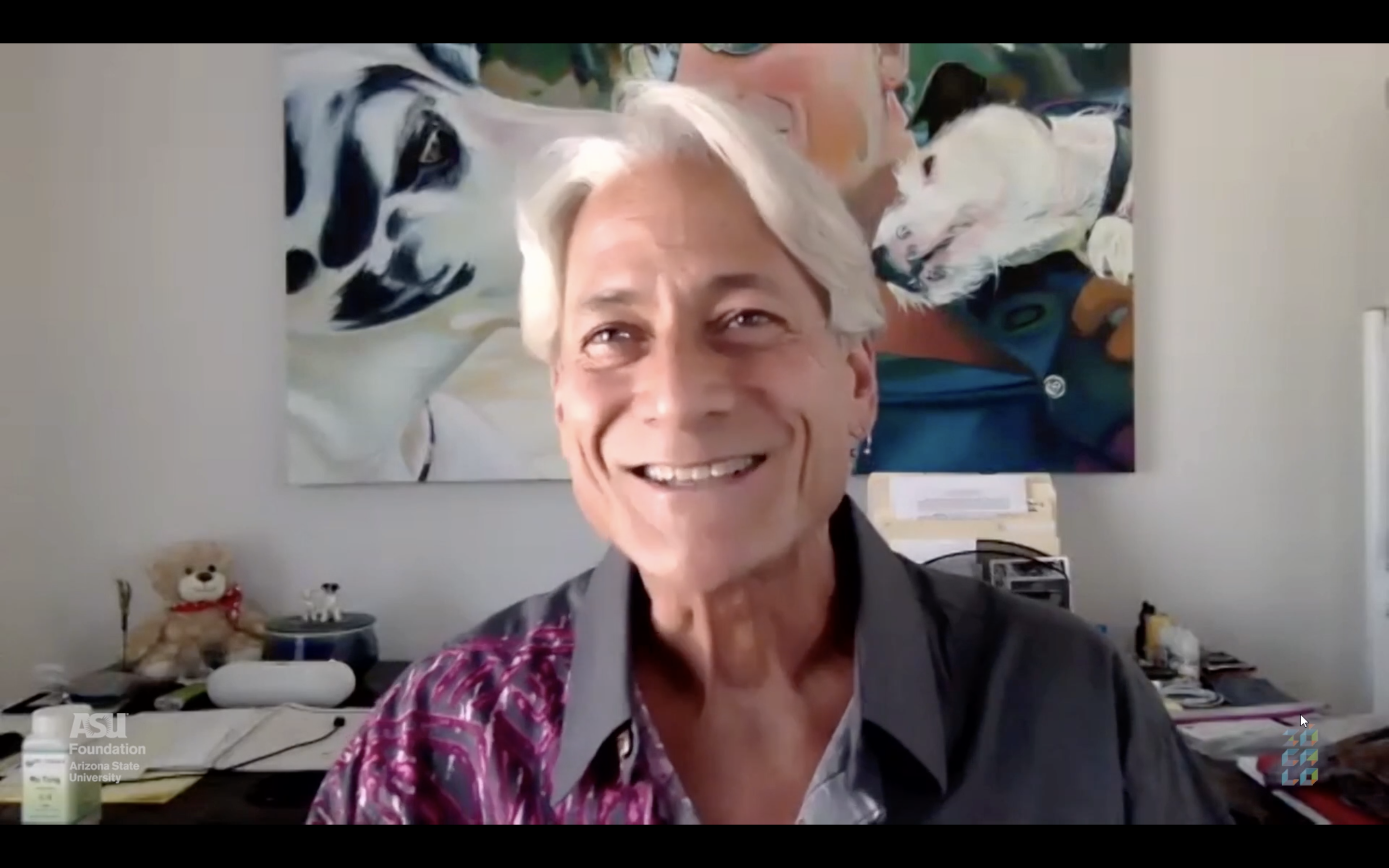 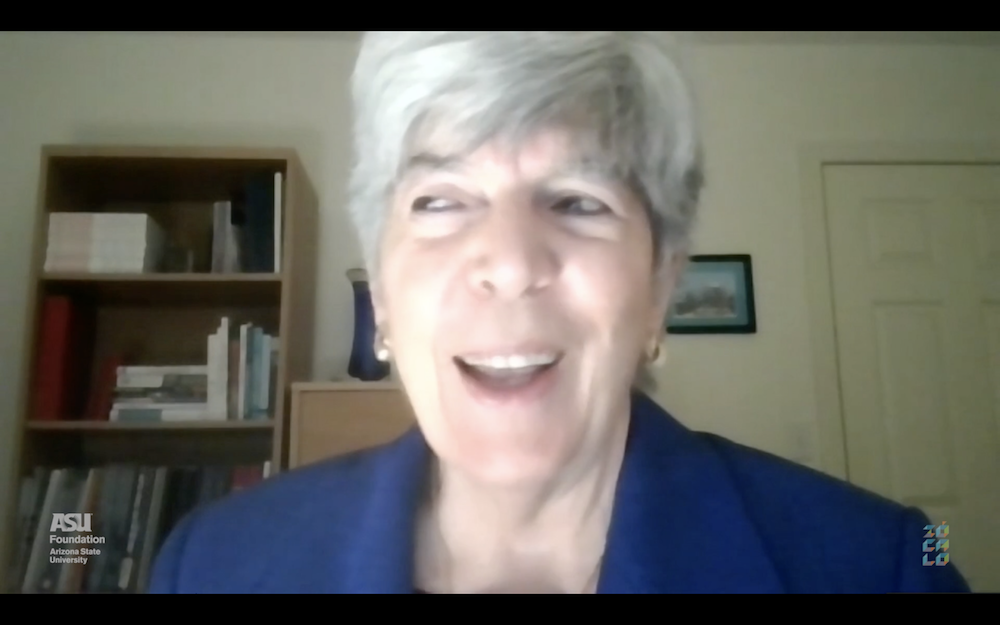 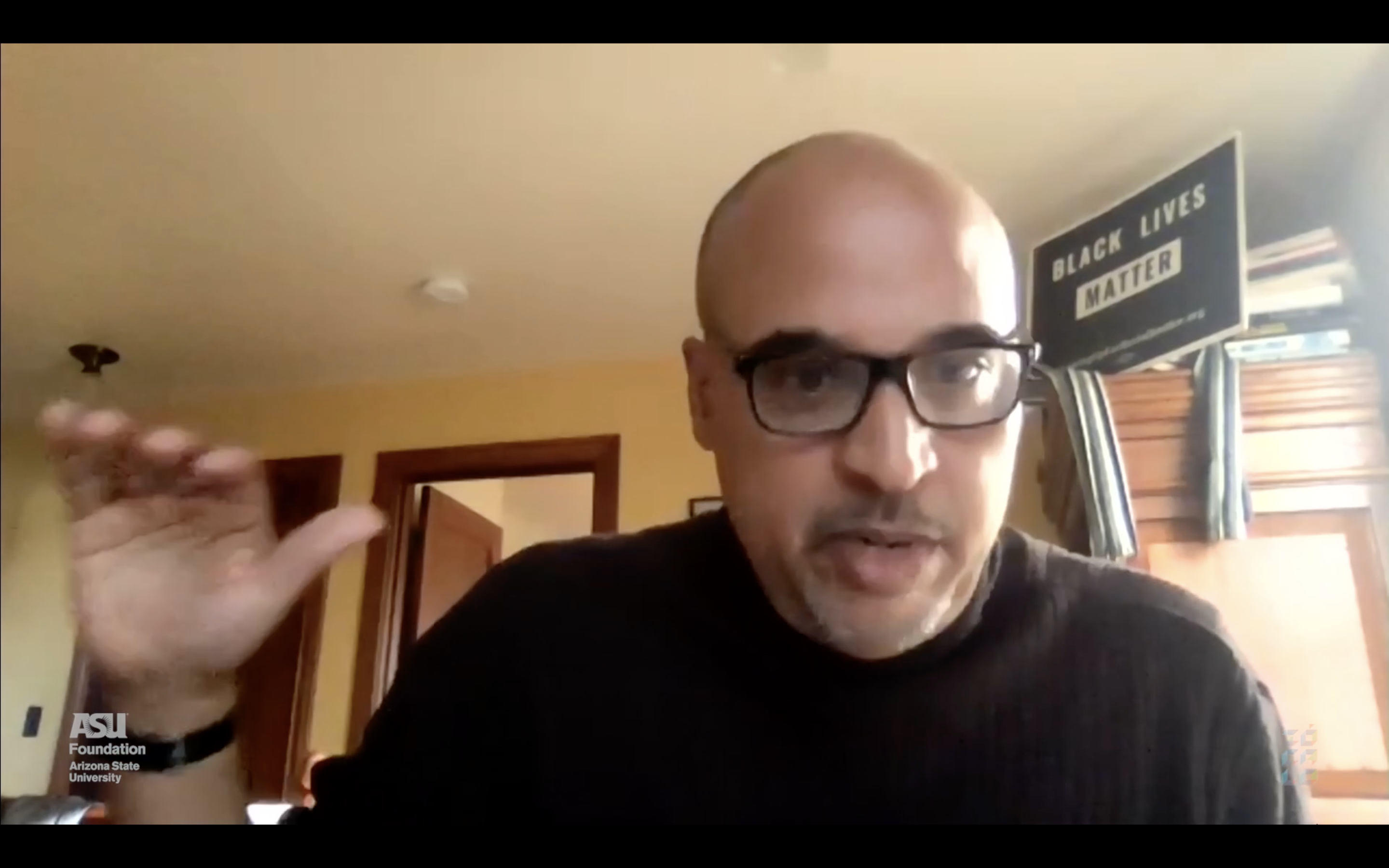