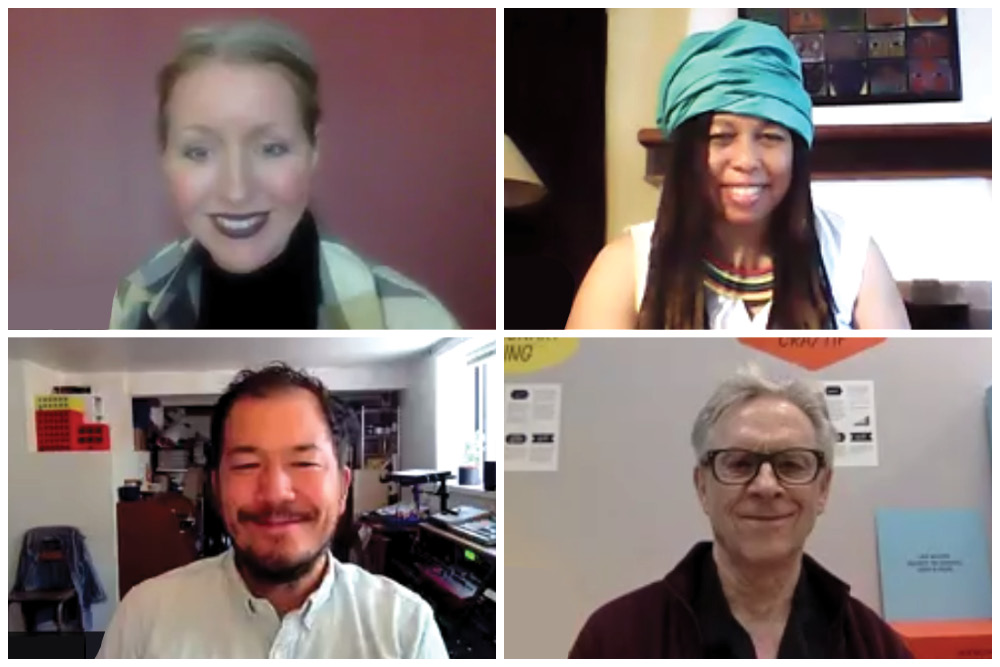 Panelists discuss "How Do Artists See the Next L.A.?" at Zócalo Public Square.

From giving communities a voice in land use and zoning to creating mutual aid networks, Los Angeles artists and arts organizations are finding ways to imagine a better future for and effect change in the city. How are they accomplishing things that politicians and policy makers struggle with? A panel of L.A. arts leaders and practitioners offered their insights at a Zócalo/LA Commons event that asked, “How Do Artists See the Next L.A.?”

Panelist John Malpede, an artist who founded Los Angeles Poverty Department (LAPD)—a performance group of people who live and work on Skid Row in 1985—likes to say, “It’s the artist’s job to confuse the categories.” He believes that artists can create openings and bring different, sometimes unlikely people together. In 2000, when a major initiative mandating that adults convicted of possessing or using illegal drugs would be offered substance abuse treatment instead of incarceration was on the ballot in Los Angeles, LAPD worked with a Skid Row women’s recovery program and the policymakers behind the initiative to create a work called Agents and Assets. Subsequently, they took it to Detroit and elsewhere to advocate for change. “It was like, ‘Wait a minute, you’re trying to reduce mandatory minimums, but you’re also working for the recovery community?’” recalled Malpede. The juxtaposition may have been confusing, but it worked. “Showing up as artists is a way of being able to create these configurations.”

Artist and designer Rosten Woo, another panelist, has collaborated with Malpede and LAPD on various projects related to policy. Woo positions artists as the people who can work beyond existing legislation to imagine larger, institutional change. “A lot of the real change that’s worth doing isn’t even on the plate right now,” he said. “You have to change our whole culture, and you have to change our whole frame of reference.” Cultural work asks, “What kind of world do we want to live in?” he added. “That gets worked out in the culture, and then moves into policy 20 years later.”

Panelist Karen Mack is the founder and executive director LA Commons, which is currently working on a project called Creating Our Next LA that brings together communities, artists, and storytellers to share their visions for such a future. “What we’re trying to do is have everybody tap into their creativity,” said Mack. “We’re trying to open people’s eyes to this expansive view that Rosten is talking about. Artists, that’s what they do. Their job is to create. They’re making something out of nothing.”

At LA Commons, she said, they want to work to give “people power and control over their own story to then create a different narrative than the one that the powers that be had in mind.” Nodding to the current state of Los Angeles, she said, “The people in charge aren’t coming up with the solutions; we need to do it. We’re trying to create space for that to happen.”

At the prompting of the evening’s moderator, arts and culture writer Catherine Wagley, Malpede and Woo discussed their collaboration on a piece about land use and zoning called The Back 9, a miniature golf course that Woo designed and built and LAPD performed on. “The back nine is an old metaphor referring to private places where decisions get made before the public process,” said Malpede.

The course was an attempt to push back against the way public participation and land use review procedures can be used as mere lip service to communities like Skid Row. “I’m interested in trying to cash that check in a sense—you’re saying you want public participation, but what would it look like if you meant that?” said Woo. In this case, the miniature golf course began a dialogue between officials and residents that ultimately resulted in the creation of a new zone that’s only for affordable housing—something that’s never happened in the city of Los Angeles before.

But how do you find artists like Malpede and Woo “who can serve and navigate communities in empowering ways?” asked Wagley.

Mack said finding the right artists to do this work can sometimes feel like searching for “a needle in a haystack,” which is why LA Commons created a leadership development program to help young artists develop the capacity to turn their work into community engagement.

In response to a question from the audience, who participated via live chat, the panelists called out recent artworks that have inspired them with new visions for the future of Los Angeles.

Woo pointed to artist Lauren Halsey and Summaeverythang Community Center, which melds art, mutual aid, and community food distribution. “Seeing artists dig into their community and support them in expansive ways is something that’s really beautiful to see,” he said. He was inspired, too, by the toppling of a statue of Father Junipero Serra in downtown L.A. “Seeing that integrated public action was really powerful,” he said.

And Mack offered up When They Call You a Terrorist: A Black Lives Matter Memoir by Patrisse Khan-Cullors. “I really loved that positioning of coming from love,” she said. 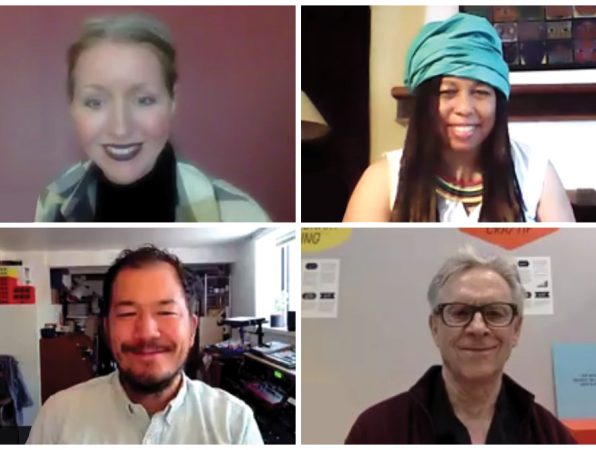