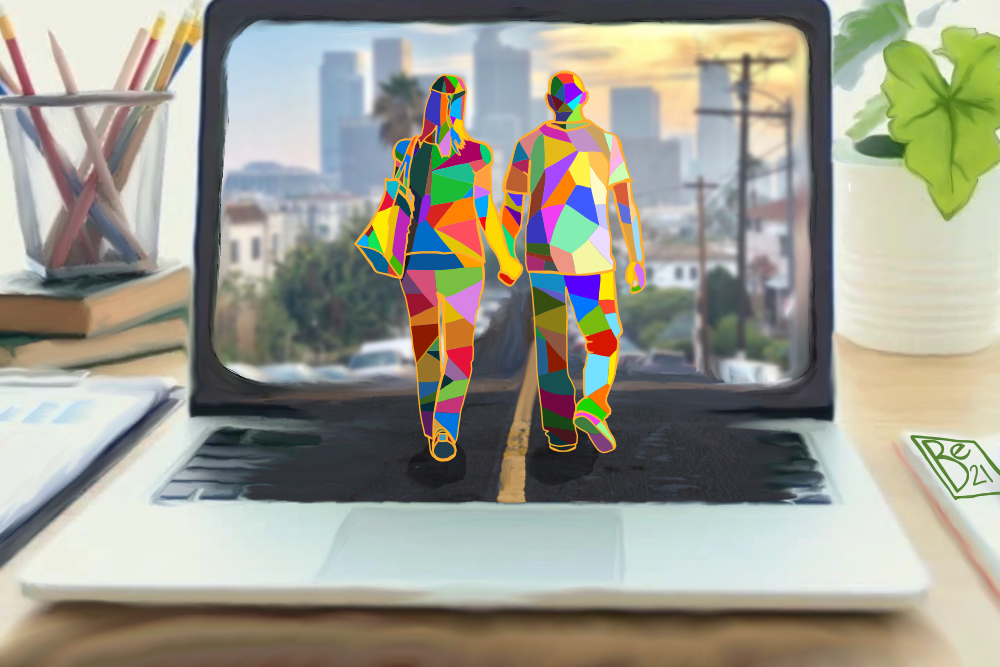 Over 18 years and 650 events since we hosted our inaugural Zócalo event in 2003, Zócalo Public Square remains as fiercely committed as ever to bringing people together around ideas. We also have continued to build on our mission, expanding the dream of the zócalo—a grand plaza where anyone and everyone is welcome to gather—to bring even more people and perspectives into the fold.

COVID only accelerated this work, moving our events to a livestream in spring 2020 and, this year, once public health restrictions allowed, pushing us to introduce a new hybrid event format. Now, audience members can once again join us in-person or tune in from anywhere in the world. It’s turned out to be an advantageous mix for a roving organization that’s both global and local.

In 2021, Zócalo made it to South Central L.A., Culver City, and to our new home at the ASU California Center at the Herald Examiner. Our move to this historic building in downtown Los Angeles means, among other things, that we can offer an even bigger stage (quite literally) to further foster community and connection among Angelenos and beyond.

In a year that saw both changes and a return to a new kind of normal, it was fitting that our very first Zócalo speaker returned as well. We welcomed back The Economist’s Adrian Wooldridge (whom we probably owe a Zócalo members-only jacket for all the times he’s shared our stage) for one of the events that Zócalo staffers voted among their favorites.

Selecting just five events to spotlight proved to be a nearly impossible task. We owe a warm debt of gratitude to our audience members, speakers, and partners for joining us in making the public square such a dynamic place. See you there next year!

Can Boyle Heights Save America?

In short: “yes.” USC historian George J. Sánchez—whose new book, Boyle Heights: How a Los Angeles Neighborhood Became the Future of American Democracy, inspired the conversation—Josefina López, author of Real Women Have Curves and founding artistic director of CASA 0101 Theater, and Los Angeles Times city editor Hector Becerra, a Boyle Heights native, came together in May to make a strong case for why Americans should look to this “magical and multiracial neighborhood” to understand the true meaning of citizenship and belonging. Bonus—our chat room was packed with people from Boyle Heights who shared their memories, restaurant recommendations, and more.

Zócalo’s first-ever hybrid event explored how place-based identity can forge new bonds across racial and ethnic lines. Held at the Mercado La Paloma, in partnership with Esperanza Community Housing, the event was part of the South Central Innervisions: An AfroLatinx-Futurism multidisciplinary arts festival. Fittingly our panelists, Community Coalition’s Corey Matthews and USC sociologists and South Central Dreams co-authors Pierrette Hondagneu-Sotelo and Manuel Pastor used much of the conversation to look ahead at South L.A.’s future.

Is There Still Merit in a Merit-Based System?

New Yorker staff writer Nicholas Lemann, as moderator, asked Wooldridge, whose latest book is The Aristocracy of Talent, and the other panelists to define meritocracy and evaluate whether it has any currency left in today’s deeply unequal society. Among the event’s trenchant observations: “We need to look for better ways, the best ways possible, of finding promise, wherever it is in society,” said Wooldridge.

Too often a dialogue around gun violence in the U.S. derails into a reductive “pro-gun” versus “anti-gun” stalemate. This was not that conversation.  Instead, this Zócalo/California Wellness Foundation event brought together a group of people who fundamentally agree that gun legislation can save lives, and asked them to discuss the difficulties and occasional victories of their work. Their solution-centric talk focused on the policies, research, and everyday action coming out of the Golden State that might have a ripple effect on the nation as a whole.

What Will It Take to End Homelessness in L.A.?

A graduate of Yale University who had worked on Wall Street, Shawn Pleasants shared his journey into and out of homelessness during this powerful panel put on in partnership with United Way and the Committee for Greater Los Angeles. Pleasants, who is now an advocate for the unhoused, and fellow speakers from a variety of local organizations and perspectives called for more innovation, collaboration, and simple human relationship-building to address what might be L.A.’s most pressing crisis.